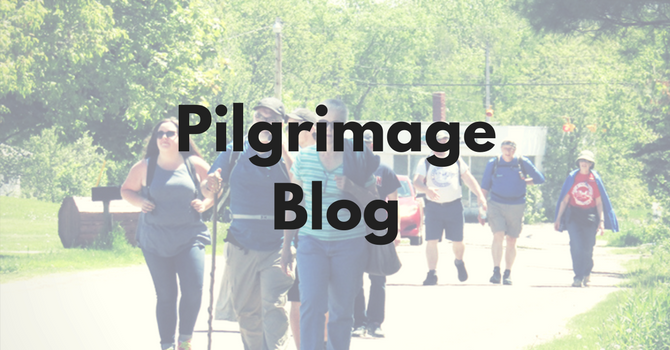 It is the day before I leave to walk with Trevor for the fifth time. This period of preparation has not been the smoothest. Trevor injured his leg during a clean up event in Rockwood Park, Saint John. For a time, it appeared that he may not be able to walk. He has now been given the all clear, but has to be careful. Please remember to pray for him.

On my side of the house, my Mother’s condition seems to have worsened over the last couple of days. Things tend to be circular with her, so I am hoping that she will come back up again. Please pray for her and my Dad as they deal with this very difficult time in their lives.

The Russian author Ivan Turgenev wrote a novel called On the Eve. It was notionally set just before the Crimean war, but many have seen in it underlying revolutionary ideas, which informed the changes in Russia as they unfolded in the late 19th and early 20th centuries. Turgenev describes a society which is uncertain. Should it move ahead into the new grounds of industrialization and western democracy, or remain in its traditions?

In her work on the place where we find ourselves today, Phyllis Tickle suggests we must be aware that the turmoil is not merely to be found in the Church, but it is a societal thing. Our culture, especially in the West, is unsure of the direction to be taken. It appears that the consensus we have relied upon is breaking down. Perhaps we are on the eve of something, just as Russia was in Turgenev’s day.

During my time on pilgrimage this year, this is the second thing which will take up some of my thinking. As the Church is pushed further to the margins of society, what role can we play? How do we operate in communities where agreed norms are no longer agreed? What is our role as peacemakers in an age of anxiety?

In the Beatitudes Jesus tells us not to be anxious about tomorrow. How do his words translate into reality in an age of uncertainty?

Kathy Asch over 1 year ago

Praying for Trevor...that you find a pace that is kind to your situation.

Praying for the Bishop's parents...that their compassion for each other brings relief

Praying for the Bishop's pilgrimage...that all who walk with him, see the world as it is, together opening to a vaster perspective...preparing for change...being completely present and open.
Blessings...