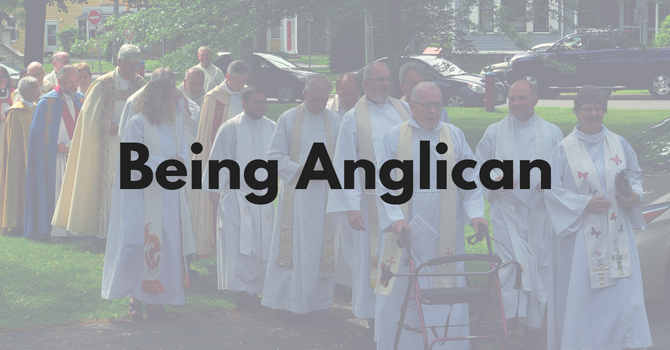 As a partner in the worldwide Anglican Communion and in the universal church, we proclaim and celebrate the gospel of Jesus Christ in worship and action.

We value our heritage of biblical faith, reason, liturgy, tradition, bishops and synods, and the rich variety of our life in the community.

We acknowledge that God is calling us to a greater diversity of membership, wider participation in ministry and leadership, better stewardship in God’s creation, and a stronger resolve in challenging attitudes and structures that cause injustice.

Guided by the Holy Spirit, we commit ourselves to respond to this call in love and service, and so more fully live the life of Christ.

— As articulated by the Anglican Church of Canada. Visit anglican.ca to learn more.

Becoming an Anglican is as simple as regularly attending a local Anglican church and contributing to its ministry. There is no formal process for membership.

The Anglican Church of Canada has its roots in the Church of England, which separated from the Roman Catholic Church in the 16th century. Influenced by the Protestant Reformation, the new English church simplified rituals and introduced the Book of Common Prayer (1549), which enabled services in English instead of Latin. At the same time, the church preserved certain traditions, including the early church creeds and the succession of bishops from the line of the apostles. Because of this history, Anglicanism is sometimes referred to as “Reformed Catholicism.”

Anglicanism travelled abroad with British colonial expansion. In 1578, near present-day Iqaluit, NU, a chaplain celebrated the Eucharist as a member of Martin Frobisher’s Arctic expedition. This was the first Anglican Eucharist in what is now Canada, but it wasn’t until the 18th and 19th centuries that Anglicanism truly took hold, as military chaplains, Loyalists, and British immigrants fanned out and settled across the growing colony. Missionaries arrived as well, endeavouring to meet the spiritual needs of settlers and to evangelize Indigenous Peoples. Gradually the Canadian church carved out its own identity. In 1787, Charles Inglis of Nova Scotia became the first bishop in British North America. More dioceses cohered as the population grew, and in 1893, the dioceses created the national body of General Synod. In 1955, the church changed its name from “the Church of England in the Dominion of Canada” to “the Anglican Church of Canada.”

Today the Anglican Church of Canada is an independent, self-governing church in communion with the other 44 churches of the worldwide Anglican Communion. It includes more than 500,000 members in nearly 1,700 parishes, and like Canada, the church has become culturally diverse. On any given Sunday, the tradition of common prayer is expressed across Canada in many languages, including Inuktitut, French, Spanish, and Cree.

— Taken from anglican.ca. Used by permission.