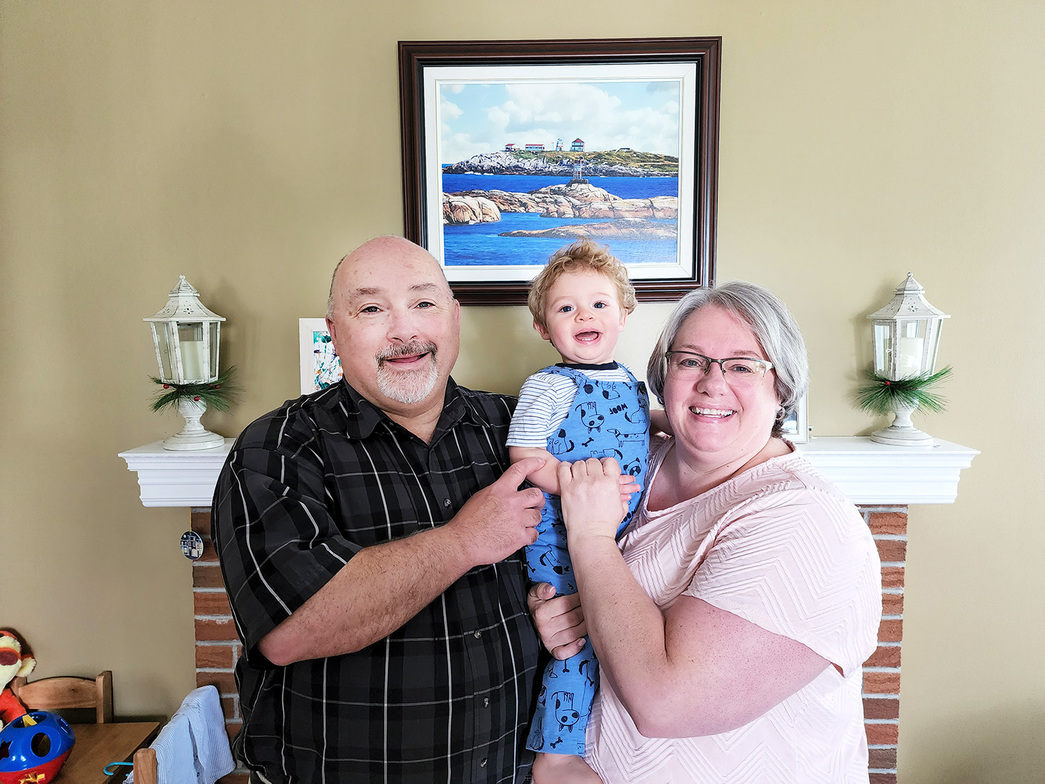 Edward Blackwood was born with a potentially fatal condition that affects one in 5,000 babies. But nobody knew it until Edward was nine months old, and then, chaos ensued.

Edward, the grandson of the Ven. Perry Cooper and his wife, Kallie, suddenly took ill late last year at his home in Grand Falls-Windsor, NL. His mom, Victoria, took him to the hospital, where an Xray showed he was severely constipated. An enema didn’t work, nor did laxatives. In fact, he got sicker.

A second Xray the following day prompted a doctor to diagnose a perforated bowel, the treatment of which would take place at the Janeway Children’s Hospital in St. John’s, but the weather was poor.

“It was too stormy for the Medivac team to fly,” said Perry. “It’s a five-hour drive on a good day. They called in Search & Rescue with a Cormorant helicopter.”

At the Janeway, Edward was diagnosed, not with a perforated bowel, but with an imperforate anus, meaning it was disconnected from his lower intestine.

“Basically, he was born with a non-working anus,” said Perry, noting that a fistula was all that allowed Edward’s fecal matter to pass.

Being breastfed, Edward didn’t show any real indication of a problem, and his condition was not visually noticeable, but as he began eating solid food, the issue came to light. The Blackwoods had thought little Edward was just a fussy baby. It turned out he had a life-threatening condition.

The Parish of Chatham began earnest prayers for their rector’s grandson. In Newfoundland & Labrador, the people of the Parish of Windsor-Bishop’s Falls, where Edward’s dad, Jeffrey, is rector, began their prayers as well.

In the operating room, a surgeon performed a temporary colostomy, removing 1.5 litres of fecal matter from Edward’s body.

Since December, Edward had been doing well despite the colostomy. But his condition worsened around Easter.

Victoria and baby Edward were in New Brunswick visiting her parents, Perry and Kallie. Several times, the stoma prolapsed, meaning a part of the intestine poked out through the colostomy hole.

Sometimes, Victoria could get it back in, and once they had to go to the ER for help during their visit.

During their stay, Edward developed an ear infection which necessitated delaying their return flight by two days. This little fact, though seemingly trivial, would play quite a role in what was to come.

“On the night before they were flying home, it prolapsed again,” said Perry. “We went to the ER.”

The doctor said nothing could be done in Miramichi. He directed them to drive to the IWK or go to the Janeway when they got home.

Edward had a restless night, but the next morning, the family drove to Moncton for the flight. Perry recalled how nervous Victoria was about getting on the plane. What if something happened in-flight?

Perry told her it would be the same time driving to the IWK as it would flying to St. John’s, so mom and baby boarded.

“We were saying prayers. Even as we left the airport, we could hear the baby crying as they went though security,” said Perry.

The flight had a stop in Deer Lake, a 20-minute wait on the tarmac, then a final flight to St. John’s. Their plan was for Jeffrey to meet them there, where they would stay the night and go on to a regularly scheduled appointment for Edward.

“She looked up and here’s the baby’s surgeon walking towards them,” said Perry. “Victoria said it was like looking at an angel.

“She said her number one choice to see coming down that aisle was Jesus. Her second choice was the baby’s doctor.”

He greeted them, asking how they were and noting he would be seeing Edward the next day. Victoria was able to tell him about the prolapses.

By the time they landed, Jeffrey witnessed quite a sight: his wife and his son walking into the arrivals hall, with the baby’s doctor carrying Victoria’s carry-on luggage!

They found a quiet area in the airport where the surgeon was able to examine Edward. He gave them instructions to go straight to the Janeway, tell them he’d examined the baby, wanted him admitted, and wanted to do a dye test the next day.

Edward was given a sedative upon arrival, which caused the prolapse to almost immediately right itself. He spent three days in the hospital.

In mid-May, Edward returned for a six-hour surgery, where doctors worked to fashion him a working anus.

As he heals, they are planning a surgery for July to reverse the colostomy and connect his digestive tract. In the meantime, Victoria and Jeffrey have had to learn how to twice-a-day dilate the new anus so it doesn’t grow closed. If all goes well, the surgery will take place and Edward will have a full recovery.

“The success rate is 80 per cent,” said Perry, adding doctors at the Janeway see this condition about once a year.

“It’s been very, very consuming, emotionally more than anything,” said Perry. “We’re looking forward to it all being over. He’s only 15 months old, but he doesn’t like nurses, doctors, hospitals because they’re all associated with pain.”

Perry and Kallie will visit before the July surgery.

“Having that doctor on the plane was a divine appointment,” said Perry. “We all believe that God in his sovereign wisdom put Victoria on the right airline, with the right stopover on the right day.

“And the surgeon is such a compassionate man. When Victoria saw him on the plane, she said immediately she felt a magnificent weight lifted.”

Baby Edward has a lot of what Perry calls battle scars, and he’ll get more before his ordeal is over, but Perry is thankful for God’s hand on his grandson, for what he describes as the best of care at the Janeway, and the good fortune of Edward’s parents being able to stay at Ronald McDonald House.

“I can’t wait until he’s older so I can sit down with him and tell him all about it,” said Perry.

UPDATE FROM PERRY:  Edward had his third surgery on June 29 to have his colostomy reversed, and his digestive system is working as it should. He is healthy, happy and very active. We are very thankful.

Margaret Sealy about 2 months ago

So glad to hear of the miraculous outcome of little Edward.
God bless all the doctors and nurses that helped this little guy and his family through all their ordeals.
So wonderful to hear about the power of prayers.
Alleluia

Ann Balch about 2 months ago

That's a wonderful story, and one that will be retold of seeing God's mercy in action. He's merciful to us every day in ways we don't even notice, but when it's something so obvious, and it involves our children or grands, it's even more special. Glad for everyone involved!

Janice Muggridge about 2 months ago

Wow! What an ordeal for a little boy. Amazing work by such an amazing medical team. Mom, Dad and grand parents have so much to be thankful for. Everyone’s prayers were answered.