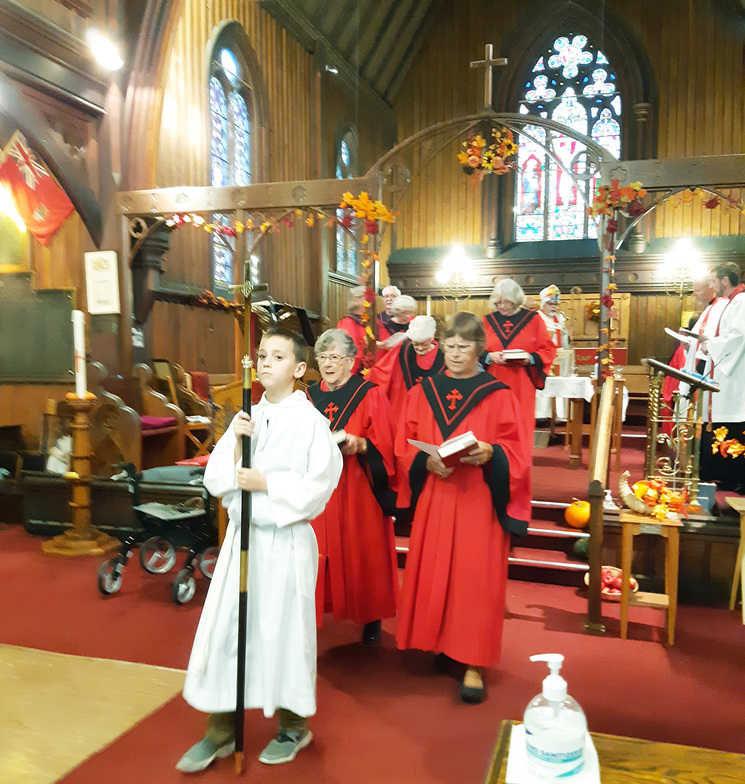 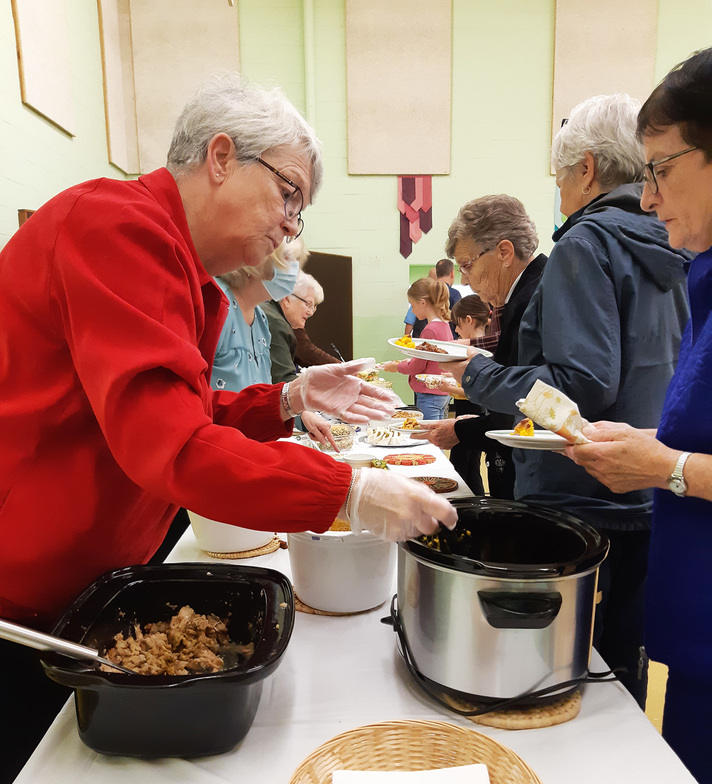 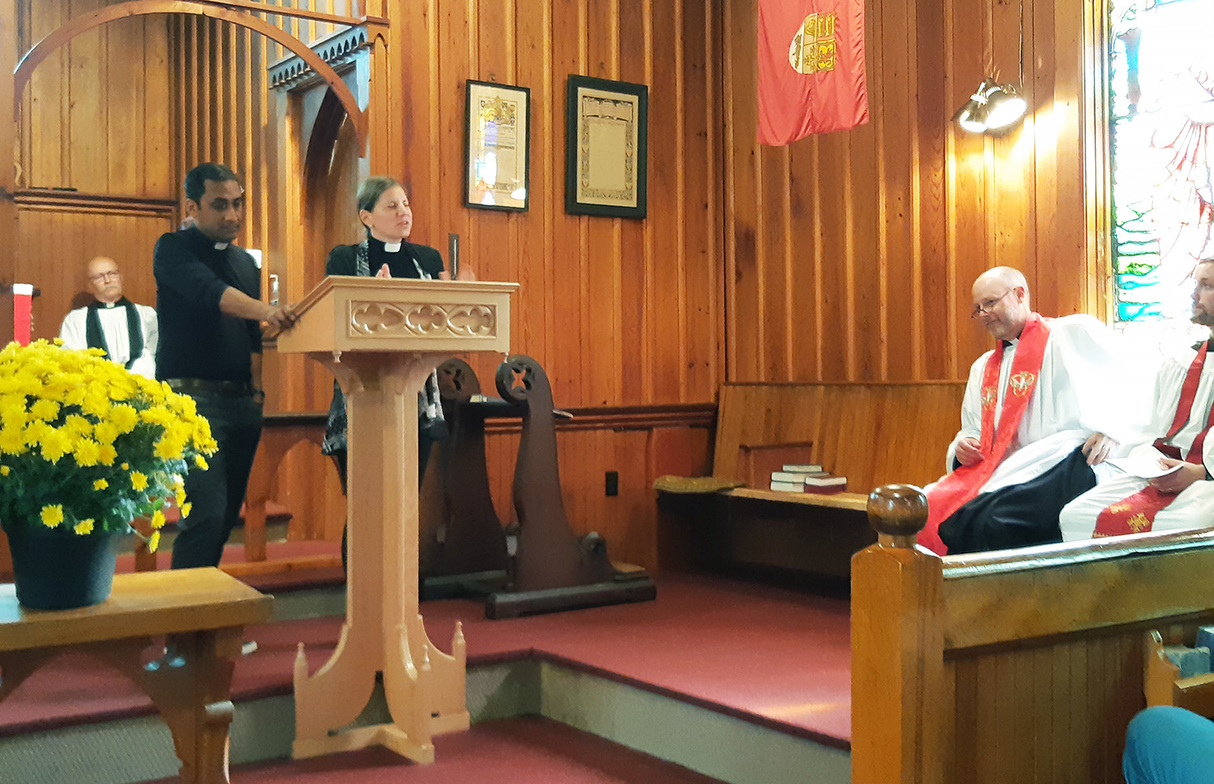 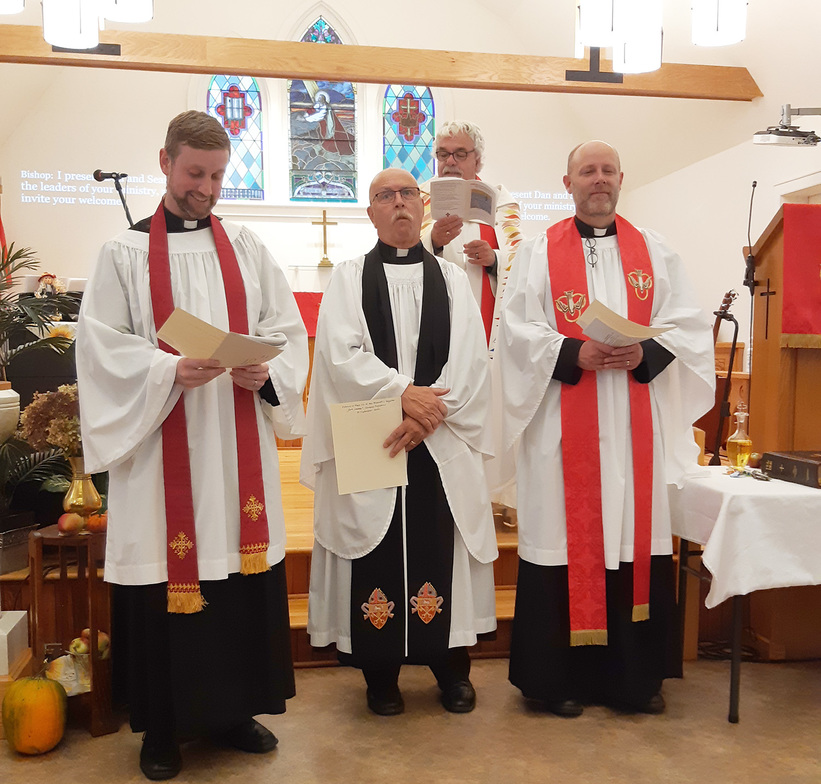 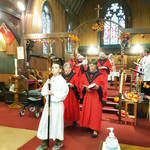 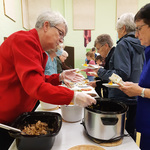 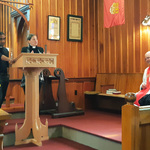 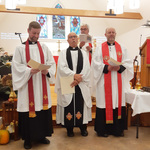 A Celebration of New Shared Ministry on Oct. 16 was a joyous day in three Sussex-area parishes. Clergy, parishioners and friends of the Parishes of Waterford, St. Mark and Sussex gathered for a three-site travelling service that marked a new missional partnership.

About 80 people gathered at St. John’s in Waterford, then moved to St. Mark’s in Sussex Corner; and ended at Trinity in Sussex with a service and fellowship.

Archbishop David Edwards noted he’d been part of a similar service, that one 30 years ago in the UK with one of the church buildings built in the 1300s.

The Rev. Jasmine and the Rev. Terence Chandra spoke at St. John’s, with Jasmine noting she completed an internship 18 years ago in the parish.

“Even then, there was talk of coming together with the Parish of Sussex,” she said. “It’s wonderful to see it come to fruition.”

Jasmine cautioned that people don’t always get along, with parishes sometimes comparing their food, music, building and so on.

“Today, put all that behind you,” she said. “This is a new lease, a new common purpose, a holy mission.”

Terence noted that he and Jasmine have been part of joined congregations, but cautioned that if the reason is to save money or cut the workload, it won’t be a success.

Part II of the ‘pilgrimage’ took place at St. Mark's in Sussex Corner. The Rev. Dr. Sean Davidson, rector, and the Rev. Dan McMullen, associate priest, are the leaders of the three parishes, and their roles were highlighted as in a Celebration of New Ministry service.

“This journey began about 18 months ago, starting with me asking the question,” Archbishop David told those gathered.

“It hasn’t always been straightforward,” said David. “But I strongly believe this will provide us with one of the models as we move forward.”

David noted synod delegates would be hearing more about such partnerships on Nov. 5 at Diocesan Synod.

David thanked Shawn for his work on the partnership.

“He’s actually sorted the whole thing out and done the heavy lifting,” he said.

Trinity Church in Sussex was full for Part III of the Celebration of New Shared Ministry. This service was a celebration of the Eucharist. The service ended with a fitting hymn, Great Is They Faithfulness, and a potluck supper.

SHAWN BRANCH
The catalyst for this effort to share ministry came with the departure of the Rev. Tom Stradwick, from the Parish of Sussex, said Shawn.

“It really took on momentum when David met with the [Sussex] wardens and the parish advisory committee,” he said. “Out of that came a commitment to discern, and then a conversation with the Parishes of Waterford and St. Mark.”

Once the parishes discerned a need to continue talking, a working group was established.

“That’s when I stepped in to facilitate the conversation,” he said.

Shawn noted nothing has changed with either corporation or the business of the parishes.  What’s changed is the sharing of human resources for the purpose of mission.

“It’s to pool resources for community engagement,” said Shawn. “It’s not a merger or an amalgamation. Its real focus is on people.”

DAN MCMULLEN
“I think the service was lovely, with a good turnout,” said Dan. “It was quite meaningful. Most people went to all three or two of the three services — not just their own church.”

“I felt they were speaking directly to us, not just Sean and me, but to the parishes.”

As for the partnership, Dan is still new, so he has little to compare the changes to. But he cited the recent Love Atlantic project as an excellent start.

“All three parishes came together to do mission together,” he said.

Love Atlantic is an annual effort to share the love of Jesus with a congregation’s community in tangible ways that help and bless people, particularly those in need.

SEAN DAVIDSON
“It was a wonderful day, and I think everyone who participated felt that way,” said Sean. “I got so much good feedback.”

Sean noted he heard from several people who said they’d never been in the other worship spaces until now.

“I’m not sure anyone had ever experienced that sort of pilgrimage before,” he said. “It all worked really well.”

Like Dan, Sean is already impressed with the success of the tri-parish efforts on the Love Atlantic project.

“I was surprised to see how people worked together across parish lines,” he said, adding they held a sock drive, used a fundraising dinner to donate to the breakfast club of a local school, and packed goodie bags for residents of a local nursing home.

Another example of cross-parish missional efforts is playing out this Advent season, where 20 people from the three parishes gathered in late October to begin planning the Living Manger event, which has not taken place since 2019.

Photo captions:
1. Crucifer Michael Dunfield leads at the end of the Service of Holy Eucharist at Trinity Anglican Church in Sussex on Oct. 16.
2. Faye Freeze was one of several helpers at the potluck supper at Trinity Anglican Church in Sussex on Oct. 16. The potluck was the culmination of the pilgrimage service to recognize the new shared missional partnership of the Parishes of Waterford, St. Mark and Sussex.
3.  The Revs. Terence and Jasmine Chandra were the preachers at the Waterford service.
4.  The Rev. Dan McMullen, the Rev. Canon Allen Tapley and the Rev. Dr. Sean Davidson, with Archbishop David Edwards in the background at St. Mark’s Church in Sussex Corner.
McKnight photos