“It’s not pie in the sky when you die; it’s steak on the plate while you wait!” says Bishop during sermon 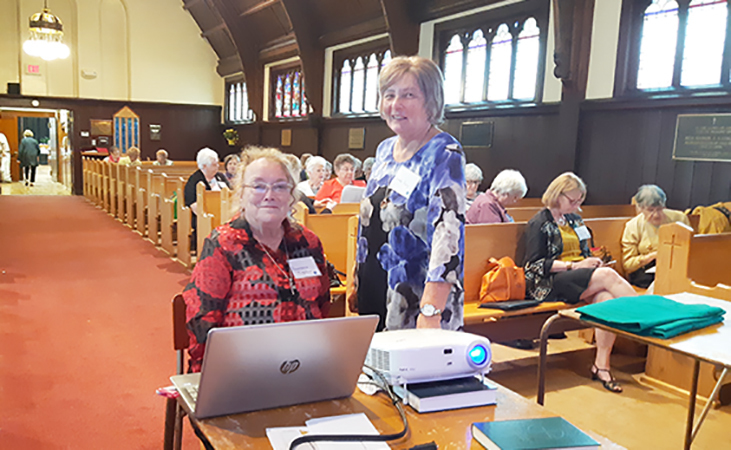 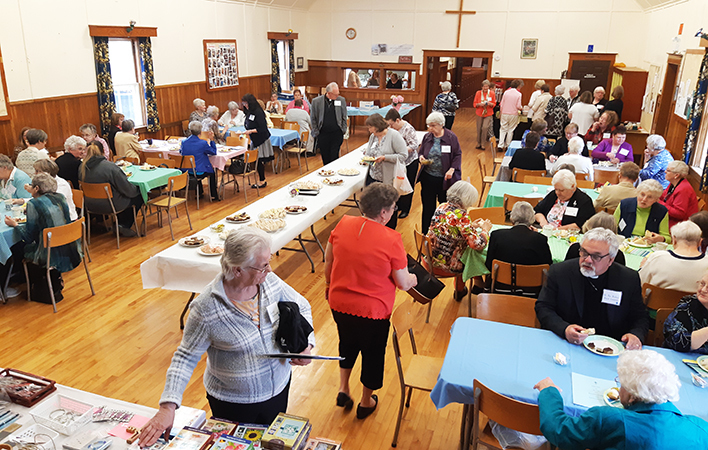 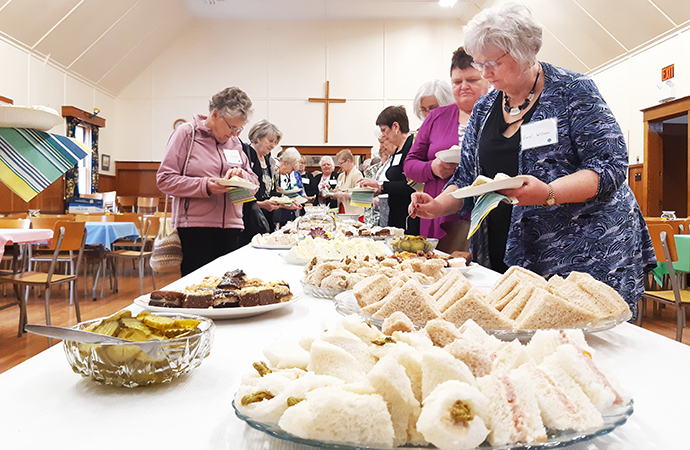 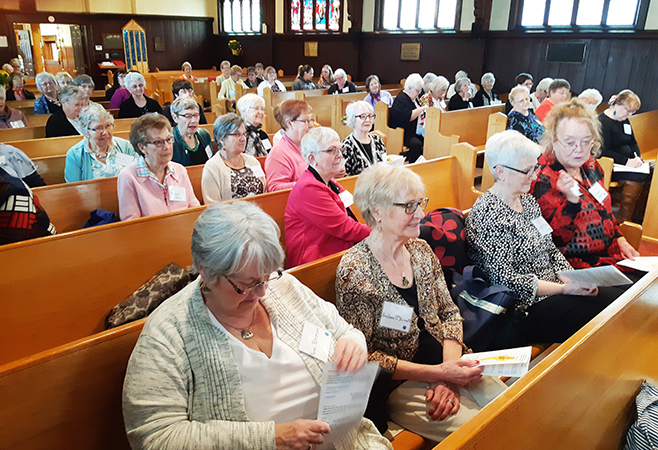 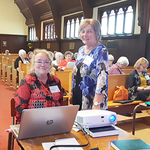 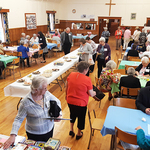 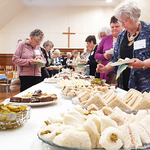 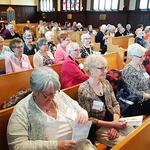 The Ven. Sandy MacPherson welcomed about 70 ACW members to their annual meeting held at St. George’s Anglican Church in Bathurst this year.

The May 7-8 event featured two Holy Communion services, reports, a business meeting, installation of new officers, a vote on a revised constitution, a banquet and more.

Bishop David Edwards was the speaker at the May 7 morning service. He began by thanking those gathered for their love and support during his time of bereavement, noting it was six months to the day that his wife, Janet, died. Janet was the honorary president of the Diocesan ACW.

The bishop noted the story of the stoning of Stephen as read in Acts 7.

“Two things spring to mind that Stephen said,” he said. “The first was ‘into your hand I commend my spirit.’ A few weeks ago we heard someone else say that — Jesus.”

Stephen also asked God to forgive his tormentors, and we heard Jesus say that as well from the cross.

The bishop explained that the significance of Easter begins on Maundy Thursday, when Jesus introduced Holy Communion.

“Breaking the bread and drinking the wine were to teach the disciples that he was going to die and rise again,” he said. “St. Paul in Corinthians says we are to do this until Jesus comes again.

“What those signs do is declare to the powers of the universe that Christ died, Christ rose and evil was defeat-ed. Whether it’s Pope Francis in front of 20,000 or Sandy here in someone’s home, it’s a declaration — he rises to new life.”

In a total immersion baptism, the priest takes the person under the water — as into a grave — then raises the person to a new life, he said.

In that new life we still see a lot of evil, but it’s our role to be Christ in the world — his banner carrier, the image bearers — while we await his return.

“It’s not pie in the sky when you die; it’s steak on the plate while you wait!” he said.

The bishop noted the banner carriers in St. George’s church. Each Thanksgiving, the congregation forms a human chain, passing donations of food from their church to the food bank next door.

That’s how we show people God loves them, he said, and that is our challenge — how do we, like Stephen, re-flect the image of God?

After the service, Diane Todd, who manages the Book of Remembrance, read the names of 45 ACW members, including Janet Edwards, who have died since last year’s May meeting.

Lunch consisted of sandwiches and sweets and was enjoyed by all.

She began by asking those present this question: If you had absolute control, what would you keep as an ACW activity. Many gave answers: receptions, visiting shut-ins, quilting, mental health initiatives, mission of the church, banquet for graduates, Farraline Place, sponsored children at BMC in Uganda, Honduras mission and so on.

She relayed her experience at the conference and the compelling story of its keynote speaker, John Doran, an assistant professor at the University of Prince Edward Island. He was three years old when the RCMP and social workers came to his house, taking him, his older sister and younger brother from his indigenous parents in Nova Scotia.

They were some of the 14,000 children who were taken across the border to the United States to be adopted — $6,000 per child, all cash, no records. Many children went to middle class families.

He and his sister were adopted by an Amish couple who couldn’t have children. Thus, he is an indigenous Canadian raised Amish who continues to practice the Amish ways.

Photographs are considered to be vain, so you will not see a photo of John on the UPEI website, nor were photos permitted during his presentation last year.

John continues to have a loving relationship with his Amish parents. Somehow he found his birth mother in Cape Breton. His father had died. The one person he has never found is his younger brother, who was one when they left Canada. He has not seen him since they were separated in Boston so many years ago.

This heart-wrenching story prompted one unnamed ACW member at the May 7 event to stand and speak to those gathered.

“I ask this group to be more accepting when meeting native people,” she said. “They didn’t grow up with our advantages. People say, ‘oh, the natives.’ We shouldn’t say that. We are all responsible to treat indigenous people with respect.

“Whoever did this to them is not of God… In my community they are ill-treated. We play our part in abusing indigenous people.”

Rosemarie went on to read letters of greeting from the three ACW-sponsored children at Bishop McAllister College. The three letters included some heartfelt comments: ‘I promise I will not let you down; I really appreci-ate you for your prayers; I will make sure I work hard. We thank the Lord who has kept us alive; My family mem-bers love you all; I have a vision of being a doctor. I have a lot of pain when I see Ugandans die; We love you.’

During the financial report, given by treasurer Joyce McElman, there was discussion on the budget with the conclusion drawn that there are fewer active members and branches, which has led to less money being raised.

“What comes in just goes out, but there’s less of it,” said Joyce.

Reports on many aspects of the ACW were given, including on Farraline Place, annual Quiet Day, the Pickett-Scovil Memorial Fund and many others. That evening, members enjoyed a banquet.

The next day after a service of Holy Communion, members installed new officers and finished their business meeting, including a vote on a revised constitution. The annual meeting ended during the noon hour.

President Linda Fury is beginning her second year as leader of the diocesan group.
“I’m very impressed with what the deanery group has done here,” she said. “They have a small group but they’ve thought of everything!

I missed the gathering in Bathurst due to family constraints. Shortly afterwards, and with great sadness, our ACW disbanded , due to aging members who did not feel they could do what they once did. I had a rough start to the year as president having had a bad fall on the ice in Jan. I was unable to schedule meetings and our treasurer was trying to do everything by herself with an already busy schedule. She also felt it was time to give up being treasurer after having held the office for quite a few years and there was no one offering to take on the task. We agreed to continuing our support of our foster child in BMC for the next 2 years. We will forward the money to Fredericton each year and continue to write to her as well. We all enjoy seeing her progress. Our prayers and love go out to the remaining ACW's in New Brunswick and across Canada in their continuing ministry.
Linda Dianne Craft - Past president- Christ Church ACW - Bloomfield, NB