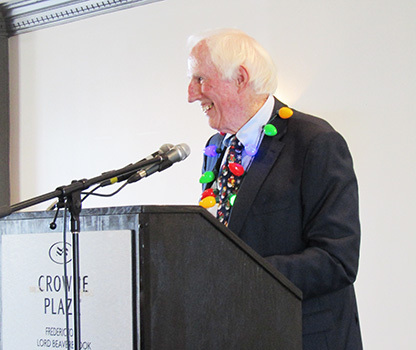 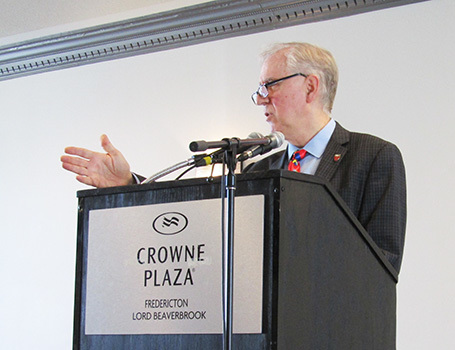 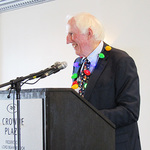 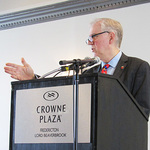 After that flashy start, he welcomed the large crowd, noting, “We’ve been going many years on this series and we thank you for that.”

He introduced the Rev. Canon Albert Snelgrove, who serves in the Parish of New Maryland, as a friend and brother in Christ. Albert’s talk was entitled Lonely No More.

Advent Talks takes place at the Crowne Plaza in Fredericton on three consecutive Mondays during the noon hour. Albert noted this is the 19th year that the Fredericton Christian Forum, the host group, has provided this gift to the community.

Christmas is a favourite holiday for Albert.

“I confess to you I love Christmas,” he said. “I try to get as much of it as I can — concerts, parties, gatherings, worship, shortbread cookies.”

Albert noted Bill’s title for this year’s series: A Better Bucket List, saying it’s been 10 years since the Hollywood movie starring Jack Nicholson and Morgan Freeman who were both very ill and still had things they wanted to do before dying — hence, the bucket list.

“Christmas as a season has an element of a bucket list,” said Albert. “What are my hopes? What do I want out of it?”

We even invite children to write down their Christmas ‘bucket list’ to Santa. But some letters reveal much more than a list of wants: Dear Santa, I want us to be a happy family together. Dear Santa, My name is Amy and my health has not been great. Dear Santa, when you’re visiting all the houses, could you take all the guns and hide them at the North Pole.

“It’s not just visions of sugar plums,” he said. “These children long for a better bucket list.”

Albert reminded those gathered that the first issue that came up in the Garden of Eden — the first deep need — had to do with an emptiness, a longing for friendship because Adam was alone.

“Too many people dismiss bible stores as dusty old myths, but the cry of loneliness is real,” he said.
Even the surgeon-general of the United States noted one of the great epidemics of the country is loneliness.

Despite never before being so connected with electronic devices, we have never been more detached from each other. A 2004 survey asked respondents ‘how many people do you have in your life to discuss important issues with?’ One-quarter said zero.

“The first issue in the paradise of the Garden of Eden was loneliness, and it continues to be a mark in the digital age,” he said.

It’s no accident that the baby in the manger was called Emmanuel — Christ with us. The book of Matthew ends with Jesus on the mountain, saying, ‘I am with you always.’

“Lonely no more is a gift we receive of his mysterious presence,” he said. “It’s also a challenge that we can make a difference to others.”

Albert ended his talk with a remarkable story from CBC’s Morningside program hosted by Peter Gzowski. On the program, Peter played a powerful piece of music and told listeners he wanted them to stop and dance right at that moment. A while later, a letter from a listener was read on the program.

The writer, a woman, said Peter would not realize this, but that piece of music was very dear to her and her husband.

‘It was our song. We always danced to it. You had no way of knowing my husband had just died two months ago.’

She was driving on the 401 in Ontario when she heard the music, but stopped her car, rolled down the window, got out and danced. A police officer happened by at the same time. He stopped and asked what she was doing, so she explained.

‘You have no way of knowing this, but the police officer started dancing with me,’ she said.

“Lonely no more!” said Albert, who then prayed a fervent prayer for the lonely this Christmas season.

On Dec. 3, Bishop Bill’s talk was entitled, “The Charlie Brown Club.” There is one more chance to attend on Dec. 10. Long-time Advent Talks speaker Dr. Barry Craig will fly in from London, Ont. to deliver a talk entitled, “A Grace With Great Benefits.”

Jean Nelson over 2 years ago

Albert is the minister in my church. His sermons also give good story each Sunday. I have sent this article on to my sister who has shared with her friends including a Vicar in the Ottawa region. I also plan to share it with my friends.

Darrell Butler over 2 years ago

The Rev. Snelgrove is an excellent speaker His talk was thoughtfully written and delivered. Powerful message! Hope to see him speak much more often. God gives us all different strengths and speaking is definitely this man’s forte.

F Andrews over 2 years ago

The Rev. Albert Snelgrove is just just one great guy.