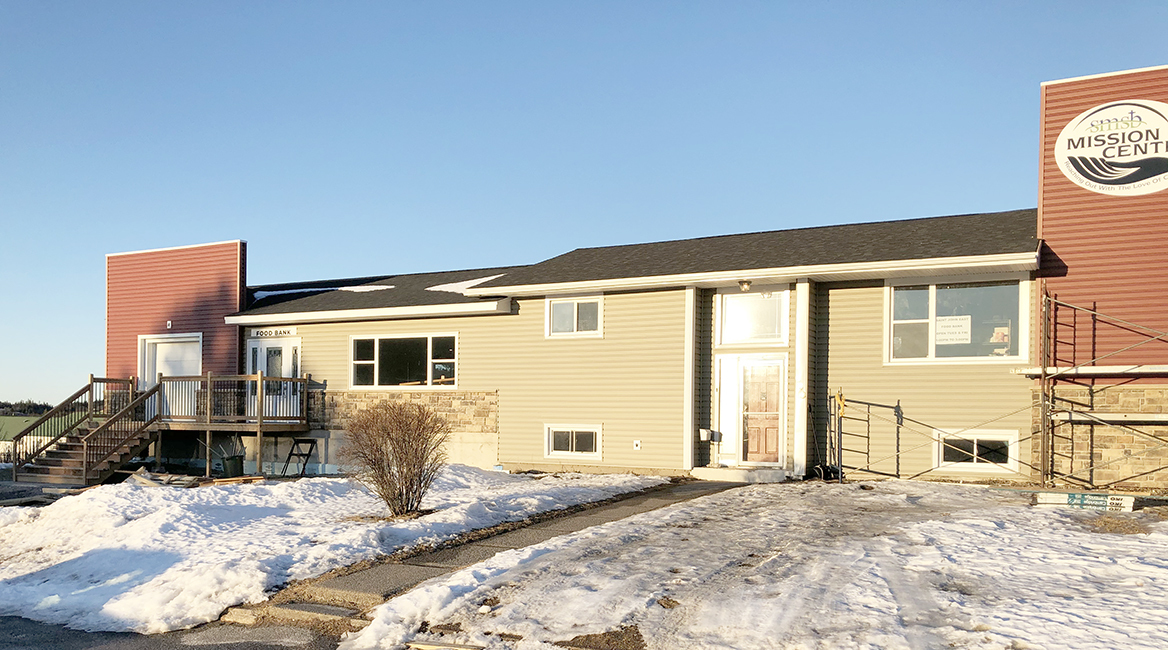 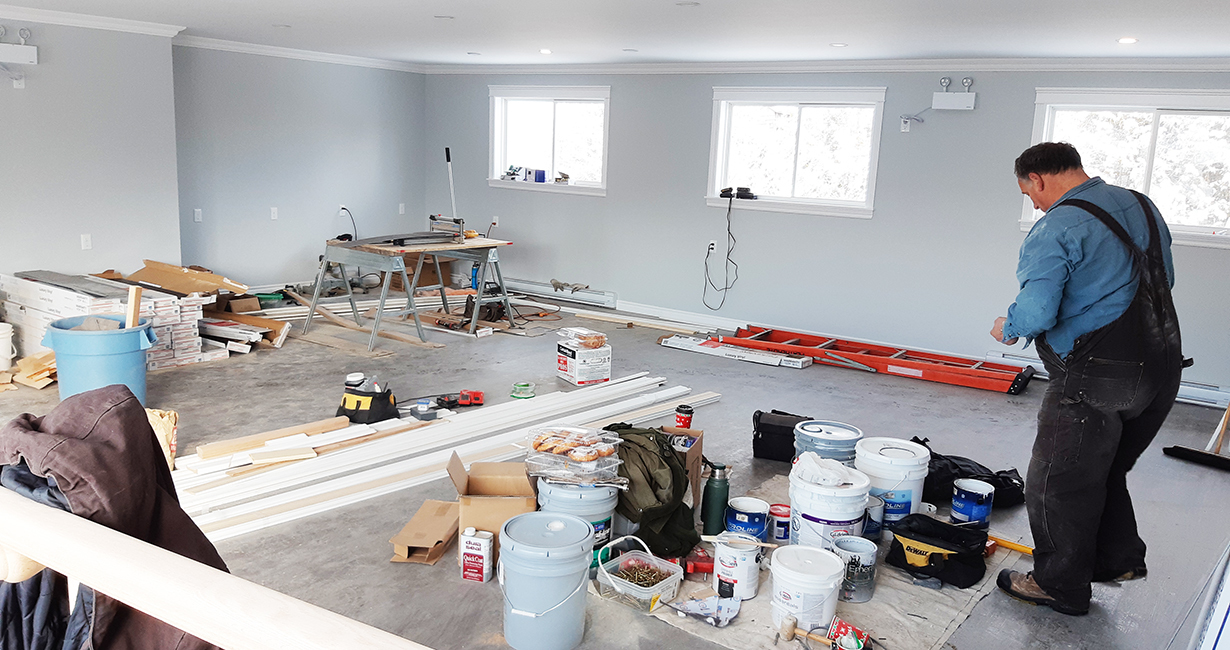 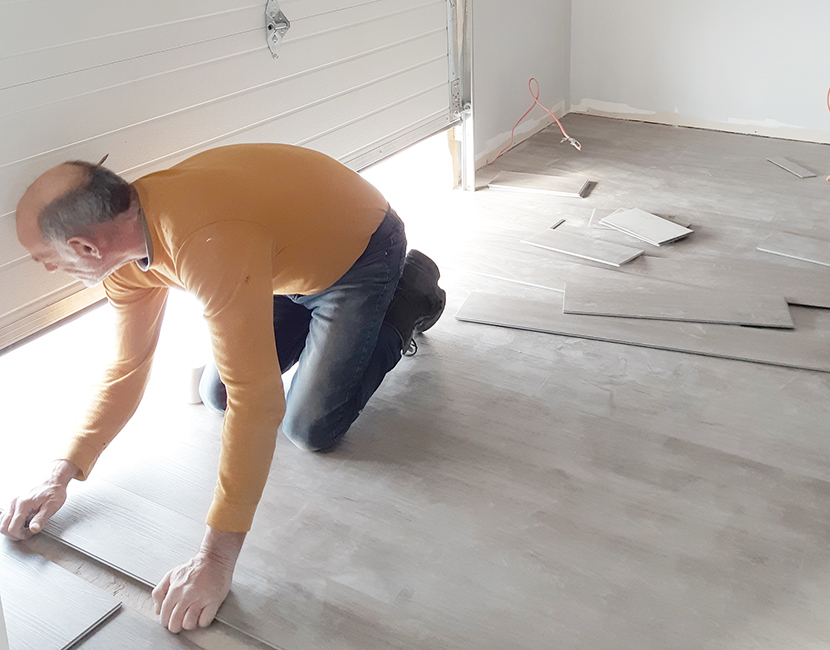 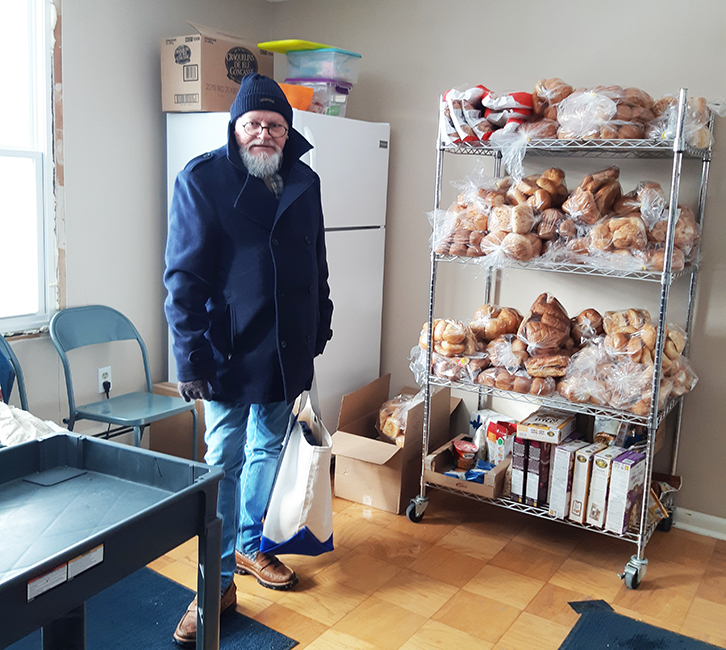 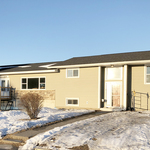 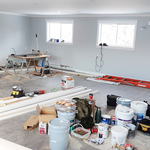 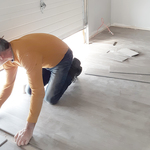 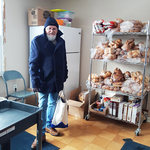 Ecclesiastes 3:1 There is a time for everything, and a season for every activity under the heavens.

This is a story about timing — God’s timing, not ours! The Parish of Coldbrook-St. Mary set into motion events that took more than a decade to come full circle, which was not really their plan. Emphasis on the word “their.”

But their desire to help feed their community is about to become a reality as they prepare for the April grand opening of the Saint John East Food Bank, housed in the new St. Mary & St. Bartholomew Mission Centre.

The church sits high up on Westmorland Road in East Saint John. From the back of the church, the view of the city is grand. The church owns most of the land, starting from its position on that hill, almost all the way down to Golden Grove Road.

But about 15 years ago, the decision was made to sell that parcel of land. Perhaps with the money, the parish would build an addition or upgrade the church. The Rev. Canon Greg McMullin owned his own home, so they sold the rectory too.

THE VISIONING
About six years ago, the parish’s mission and outreach committee held a visioning exercise.

“We wanted to move outward,” said committee chair Harold McInnis, who is also a warden and a layreader. “We came up with a lot of ideas based on Vibrant Communities Saint John, city and provincial studies. One of the things was food security — a food bank.”

In the meantime, someone donated money to help buy back the parcel of land they sold. Then they heard the rectory owners wanted to sell. They asked for the first right of refusal.

“We talked about it but we didn’t have the money,” said Harold. “And we had no defined purpose for the building other than as an extension of church usage.”

They’d heard they should expect a bequest, but how much and when were unknown. They couldn’t finance, or even plan a project on a possibility.

Not yet, said God.

Greg was curious about establishing a satellite food bank on the premises, so he sent Harold to the Saint John East Food Bank, a 10-minute drive from the church, to make the offer.

“He asked me to go along and propose the idea, but they didn’t bite,” said Harold. “They didn’t have any extra volunteers.

“We didn’t either, and our church building wasn’t conducive to it at that time.”

Not yet, said God.

THE TIMING
But one of the things that came out of Harold’s errand was an offer to help.

“I said ‘I can help you get organized’ and they said, ‘we need a treasurer.’”

Meanwhile, the food bank was facing a dilemma. The Park Avenue United Church, where they were headquartered, was being sold. They went ahead with an interim plan to continue to rent the church hall, but in January, 2019, they were told they would have to vacant the building by July.

“I got an email — the final notification that the lease was not being renewed,” said Harold. “And within the hour, Greg got confirmation of the inheritance!”

Things were beginning to fall into place. Around the same time, the parish formed a property development committee to investigate uses for the property, so Harold presented a plan to buy back the rectory to house the food bank.

“It was in line with our visioning,” he said. “It was one of the things we’d put on the ‘eventual’ burner.’”
The committee sent Harold off to make a presentation to the food bank.

“They were thrilled. They agreed,” he said. “It was divine providence, no doubt about it!”

With the rectory back in the parish’s hands, they used the expertise on their property committee — an architect — to make a plan for the parish mission centre which would house the food bank.

THE PLAN
The rectory, paid for with the bequest, has doubled in size. An interparish loan of $150,000 from the Parish of St. Andrews is paying for the addition and renovation.

The parish is running a fundraising campaign to pay down the loan — hopefully, two years ahead of the five-year term. Individual and corporate donations, dinners, concerts and other events are on the horizon.

The food bank will rent two-thirds of the space, at $1,000 a month, and the remaining space will be used for other activities.

“The whole idea is to be self-sufficient, for us to provide the space, the organizing and co-ordinating, but it’s for the community. We’re providing the facility and location at minimum expense to the parish so it’s not a drain.

“We’ve made contact with Public Health,” he said. “Schools have approached us to do reading programs there.”

THE UPGRADE
The corporate community has been very generous in donating or cutting the cost of many building materials: shingles, railings, drywall, siding, paint, fixtures and so on. Home Depot and Sherwin-Williams have been especially generous, said Harold. Emery Chapell is the contractor.

The house has been reconfigured to allow for a great deal of food storage, both upstairs in the old rectory and in the basement of the addition. A new walk-in freezer has been installed and a garage door will allow for easy deliveries. Food bank clients will enjoy a large, bright, accessible reception room in the new addition. The lower floor of the old rectory will be parish space.

“It’s going to be an excellent facility and very much in line with our mission and outreach visioning,” said Harold. “It was a no brainer.”

“I am humbled by the God-given opportunity our parish has been given to provide more outreach ministry to our local community. Only by God’s grace. Thanks be to God,” said Greg.

THE NEED
“This project represents the direction in which our parishes need go,” said Bishop David Edwards. “The decision to provide a home for the Saint John East Food Bank and other initiatives is a well thought out Biblically-based response to issues in the area.

“This has been done in a timely way and those who have led and been involved in this ministry development are to be congratulated.”

The Saint John East Food Bank, run by volunteers from several churches including the parish, has been operating at the new site, but at limited capacity, since leaving the United Church. Even so, their numbers have jumped by 30 per cent, a sure sign of the need in their new neighbourhood.

There is still the issue of bus service. The city bus stops at the bottom of the hill, and it’s a long walk to carry groceries. The parish hopes to work for a change to the route.

Recently a sign went up on the building, with these words: “St. Mary & St. Bartholomew Mission Centre — Reaching out with the love of Christ.”

But what about all that land on the hillside behind the church — owned, sold, bought back, but for what? Seniors housing? Some other mission-minded project?

The parish awaits God’s plan — and his timing.

PHOTO CAPTIONS:
1. Harold McInnis inside the new food bank now housed in the old rectory.
2 & 3.  Workers inside the addition to the rectory, which is now a food bank for Saint John's east side.
4. The sign is up and the food bank is seeing a marked increase in client usage since moving. This photo shows the old rectory and the addition. (McInnis photo)
Other photos by Gisele McKnight