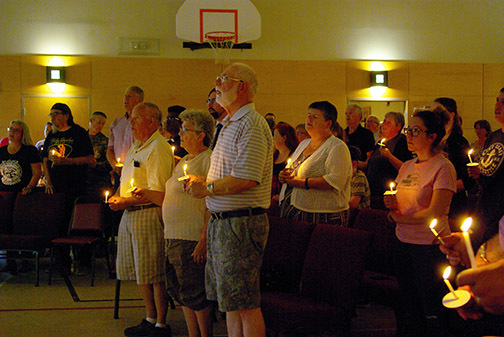 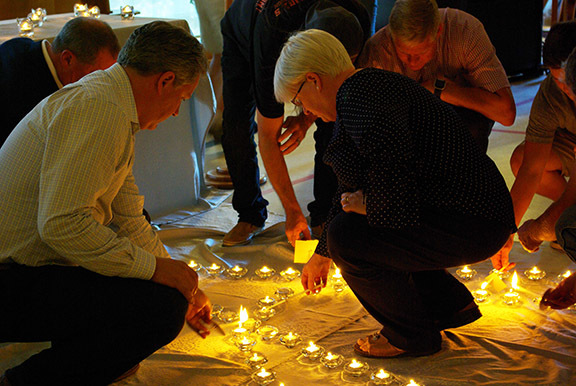 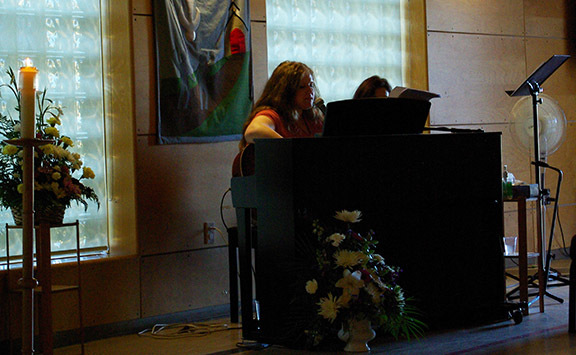 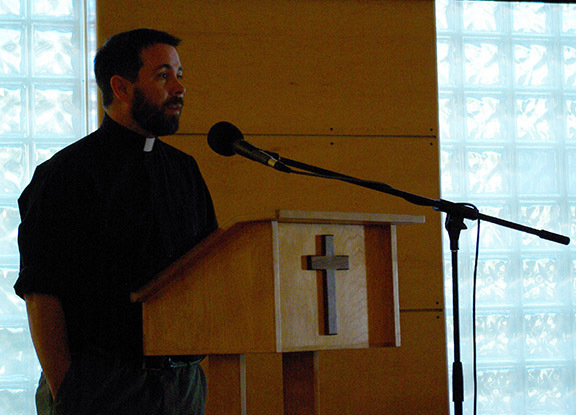 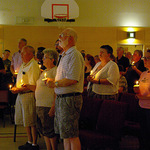 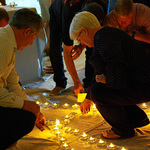 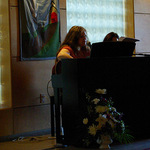 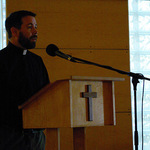 Just after dawn on Friday, Aug. 10, four people were murdered on the north side of Fredericton, two of whom were members of the Fredericton Police Force. Constables Sara Burns and Robb Costello, and Donnie Robichaud and Bobbie Lee Wright died in an apartment complex parking lot on Brookside Drive.

Although he hadn’t planned to be in the city and was still on vacation, Bishop David Edwards felt the need to be in Fredericton that day. Shortly after he arrived, he crafted a press release noting the terrible events of the day, and advising that everyone who felt the need for support or prayer was welcome to join him for a prayer vigil that evening.

Soon after the press release was sent out, the phone began ringing, and in fact, it rang all afternoon with requests for interviews — from national and regional media outlets. The bishop offered words of encouragement, support and sympathy on CBC News (national), CTV news (national) and CBC radio (New Brunswick).

The vigil was held at St. John the Evangelist Church, just around the corner from Brookside Drive. Although organizers had no idea if anyone would show up, the building was full by 7 p.m.

About 200 people, including two dozen members of the media (national, regional and local) attended the vigil, and CBC streamed it live on its website. There was a vast amount of media coverage of the vigil that night and into the next day. Three more media outlets followed up with the bishop afterwards that evening and the next day seeking his opinion on the vigil and the state of the community.

The Rev. Paul Ranson opened the service with these words: “Tonight we are sharing our grief together. We like to think we’re individuals, but when tragedy strikes, we come together for healing.”

Several people offered readings, including Pastor Brian DeLong, a United Church minister serving in Stanley. He noted that among his congregation are the mother-in-law and father-in-law of slain officer Sara Burns.

“Tonight our hearts ache,” he said.

Brian and others read from the book of Ecclesiastes, the Psalms, and the Gospel of John. Alexandra Page, with Catherine McKenna, sang several songs and led the congregation in singing, including Abide With Me, Amazing Grace (My Chains Are Gone), and How Deep The Father’s Love For Us.

Bishop David noted that several years ago while he was rector at Stone Church in Saint John, he arrived at Saint John Regional Hospital to comfort the family of a person who’d died in a car crash.

“I felt totally useless, as I do today,” he said. “Someone said that sometimes all we can do is stand together in the darkness.”

Before the service, the bishop had arranged dozens of tea light candles in the shape of the Greek letters Alpha and Omega. As the congregation lit the candles they were given, he invited them to come to the altar to light the tea lights as well.

“These candles represent the light of our solidarity — with each other, with those who have been greatly affected, and of course God’s solidarity with us,” he said. “That light is hard to see tonight, but as a minister of the Christian gospel, I can say God is here with us.”

Prayers were said for the dead, their families, fellow police officers and first responders, for the community and the province, and for all those affected by the events of the morning. Many tears were shed during the service, a raw reminder of the trauma the community was experiencing.

Among the attendees were Bishop Robert Harris, bishop of the Catholic Diocese of Saint John; pastors from the local United and Baptist churches; several MLAs; many priests and Anglicans from the area; as well as people who live near the shooting and members of the community simply needing a place to focus their grief.

Bishop Harris closed the service in prayer. The church remained open for anyone who wanted to stay and talk or pray.

It was a terrible day for all involved, but the Parish of Douglas & Nashwaaksis and the diocese were blessed to have been able to provide mourners with a space and time to grieve, and to lift up the name of Jesus throughout it all.

On the day of the funeral, Saturday, Aug. 18, Bishop David was interviewed by CTV national news before the service. The bishop was asked to participate in the regimental funeral. He sat on the platform during the service and prayed the benediction.

“Today a terrible event occurred in our city which will have an impact on many people for some time to come. As bishop of Fredericton, I wish to extend my condolences to the families of those affected.

The Fredericton Police Force works hard to protect us every day, and today, I suggest that we, as a community, lift them up in our prayers and thoughts. I personally express my gratitude for their service to us.

At times like this, we as a city and a province need to draw together for mutual support and comfort. I encourage people to gather in places that are sacred to them to pray and remember.

To that end, the Parish Church of St. John the Evangelist, at 75 Main Street in Fredericton, will host a prayer vigil at 7 p.m. this evening, to which all are invited. Everyone who feels affected or in need of support at this time is welcome.”

Robert Taylor over 3 years ago

Thank you, Bishop Edwards, for your visible leadership. I was in downtown F'ton on business that first day, and was moved by the sight of the growing memorial display at the police station.
Robert Taylor,
Parish of Rothesay.