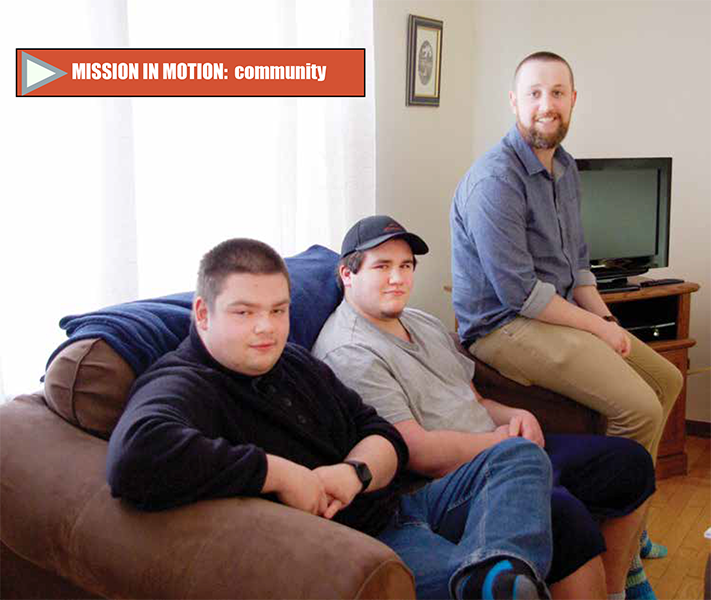 Ascension House, season II is just about to draw to a close in Apohaqui. Since last fall, Jesse Galbraith, 19, and Joe Duplisea, 22, have lived in the rectory and served the community.

Readers may recall that from October 2017 to April 2018, the Rev. Dan McMullen had three friends living and working with him in the Kennebecasis Valley region he serves as missioner. After that initial six months, Dan was open to running the experiment in community living once again and the two came on board.

Joe works full time at Outflow Ministry as shelter assistant to the director in Saint John, so he squeezes in community support where he can.

“I’m impressed,” said Dan. “He gets to quite a lot of our things. He’s at church, at events when he’s not working.”

One time, though, after working a Saturday overnight shift at the shelter, he rolled into the rectory yard just as parishioners were gathering for church. A lady hollered at him to join them, even though his bed was waiting. Easygoing Joe dutifully crossed the road and attended church before going to bed.

“I do what I can,” said Joe. “I usually help out with youth group in Hampton. I get to church when I can and I do a lot of set-up.”

Joe is ideally suited both to working at the shelter and in the community.

“I love it,” he said. “I like living in the community and hanging out with the guys, living with friends. It’s the first time I’ve moved out of my parents’ house.

When he lived at home, he spent his time in the house, “but here, I’m around more and I can be more interactive.”

He’ll be staying at the rectory until June.

Jesse is a community outreach worker under a provincial youth program, just like his friend, Nat Fetter, was last year in Apohaqui.

And it seems Nat played something of a divine role in Jesse’s decision to go to Apohaqui.

“Nat said to me. ‘I hear you’re moving to Apohaqui.’ I had no idea. Nobody knows why he said it. Then Dan asked me at the end of TEC.”

“God worked through Nat, I guess,” said Dan, and Jesse decided it might be a good idea.

“It’s just what I’d be doing with my dad — but getting paid,” he said.

Jesse is the oldest son of the Rev. John Galbraith, who is a half-time priest at St. John the Evangelist in Fredericton and director of Camp Medley. Now Jesse is enjoying being the leader instead of the helper.

“I really enjoy working with youth group,” he said. “The only difference is I’m planning the games, not just helping out. Now I’m actually leading it.”

Both boys, Jesse from Fredericton, and Joe from Saint John, are finding life in Apohaqui is more than acceptable.

And his drive to and from Saint John allows him time to listen to worship music and decompress.

Neither is a musician, but they help out in many other ways in the communities of Apohaqui, Belleisle Creek, Hampton, Bloomfield and Upham. They volunteer at various schools, community events, breakfasts, suppers, food banks and youth gatherings — both parish and non-parish events. Jesse runs the sound and PowerPoint at church services, and Joe can often be found helping Dan during Holy Communion, something parishioners love to see.

And Jesse has a special job at the Parish of Upham’s monthly community breakfasts: bacon guy.

Despite Jesse’s bacon expertise, no one among the three has emerged as a cook.

“We’re spoiled because we get fed at events and activities and take some leftovers home,” said Dan.

“It’s a very different experience, mostly because of the guys,” said Dan. “They’re much quieter. They’re not shy, but just quieter.”

Their time together is just about wrapping up, and there’s no doubt the congregations and the community have enjoyed these past two years.

“It’s felt really good — a God-given kingdom ministry for the guys here and the community. It’s very life-giving for the parishes,” said Dan. “People were always asking if we were going to do it again, and they were so excited to hear Jesse was coming here.

Dan believes the parish has learned from having the boys with them.

“People love it. It’s been such a life-giving thing for this little parish,” he said of Upper Kennebecasis. “I think we’re realizing we can just be the church and not worry about numbers. We’re supporting community, and they’ve been very welcoming.”

This is looking like the second and final community living experiment, at least for awhile. Dan is getting married this summer to Sarah Tabor, and he will move in to her house in Sussex. But Dan isn’t quite willing to say no forever.

“I’ve had lots of different ideas,” he said. “God made it come about the first time. He can do it again.”

Pat Hanratty about 2 years ago

We have been blessed to have the guys in the Valley, St. Paul's in Hampton always look forward to seeing Dan and Jesse and all the enthusiasm they bring with them!

Amy Hoyt about 2 years ago

All three of these guys are such a huge blessing to the Ministry in our area!

Beverley Floyd about 2 years ago

We here, at Church of the Ascension, Apohaqui, have enjoyed each of the young men living in our Parish rectory. Each one always willing to help, when asked, in church and community ' events'. We are Blessed to have them living /working/ learning in this rural community, and ' wish them well' in future endeavors , and continued God's Blessings.