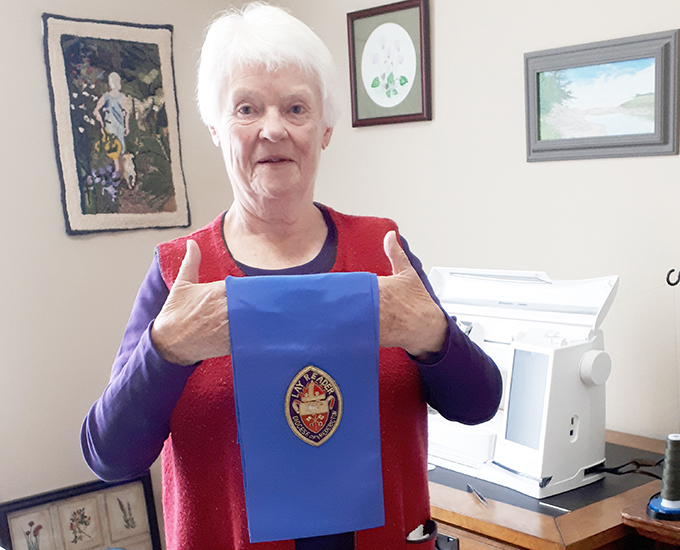 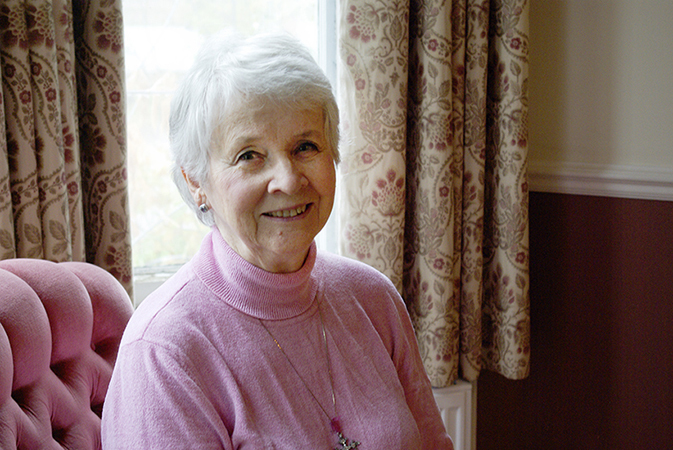 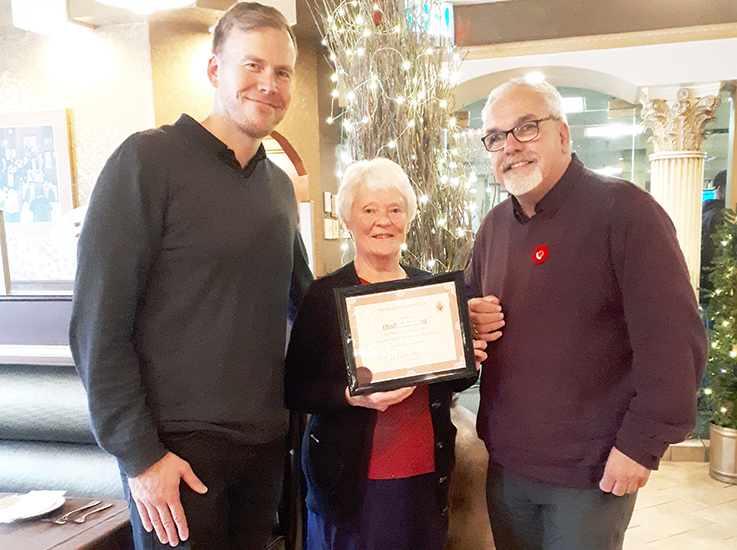 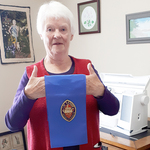 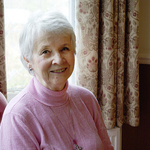 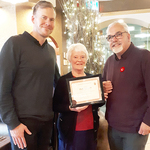 It’s been so long since Betty Kennett took over making lay reader scarves that she cannot quite remember how many years — or decades — it’s been. She inherited the job from Marjorie Secord, which she estimates was probably 30 years ago.

And now it’s time to give it up, she says.

“I’ve been on the point of stopping several times,” she said recently. “It’s partly age. I’m almost 83. It really is time for someone younger, or maybe a person to team up with someone.”

Warden of layreaders Cleo Cyr has plenty of accolades for Betty, even if Betty is uncomfortable hearing them.

“We will be forever grateful for the years Betty has volunteered her time and talents, both as a layreader and in developing the design and making of layreader scarves,” she said. “Diocesan layreaders feel extremely honored and grateful to wear one of her designs.”

Cleo has found a replacement for Betty in Marilyn Lewell at Christ Church Cathedral. She is a retired nurse who assists the parish nurse at the Cathedral, and is a member of the communications committee and the health ministry team there.

She’s quite accomplished at the sewing machine, having made her daughters’ bridesmaid dresses, her own clothing and even drapes, though she hesitates to call herself a seamstress.

MAKING A SCARF, AND MORE
Making a layreader scarf is second nature to Betty, having done it hundreds of times using the pattern she created. It takes about two hours and almost a metre of fabric to make one scarf. She makes them in three lengths, depending on the height of the recipient.

But layreader scarves are not the only item she’s produced for the diocese. Twenty years ago, then-Bishop Bill Hockin had the idea to gift the clergy with millennium stoles. The cost of getting that order filled through regalia companies was astronomical, but her priest at the time, Keith Joyce, suggested her.

That led Betty to make one stole for each of the 82 parishes. Materials were provided by the Diocese and she received $25 each for her efforts. She then made at least another 80 stoles for retired priests, chaplains, and subsequent newcomers at no charge — well over 150 in total.

But that’s not all. When Church Army/Threshold Ministries moved its headquarters to Saint John, commissioned officers were permitted to wear scarves.

“I took on this ministry,” she said, adding each scarf was personalized. “I have made it a practice to pray for everyone that I sew for.”

THOUGHTS ON FINERY
But lovingly and prayerfully sewing all that ornamentation is actually an odd job for a woman who does not go for all that decorative church apparel.

“I’m not really 100 per cent behind all the finery our clergy wear,” she said. “It’s ironic I’m doing this. Jesus said you don’t need two coats on your back. I honestly think we get hung up on the embellishments. All that finery — it’s divisive. It creates a class distinction.”

She told of a time at Saint Paul’s Hampton, her home church, when thieves broke in and stole the silver. She recalls being quite delighted, thinking it was the best thing that could have happened.

With the rector’s blessing, she set about locating some pottery vessels to replace them, more in keeping with what Jesus might have used at the Last Supper, but before she could finalize a purchase, the thief was caught and the silver returned.

RELAXATION? NO!
Now that Betty is retiring from layreader scarf production, you’d think she’d have time for some relaxation, but no, that’s not a word in her vocabulary.

She sold her 200-year-old, 13-room home on 1.5 acres in Hampton earlier this year, trading it for an apartment in Saint John. She swims five days a week, and walks the Harbour Passage the other two days.
Knitting now takes up some of her time. She knits baby blankets for First Steps, a program for pregnant girls in the city.

“I thought a hand-knit blanket would show that some one cared,” she said.

She also knits baby bonnets for the hospital, since, she says, it’s been proven that infants wearing hats lose less weight at birth. Every new baby gets a hand-knit hat at the Saint John Regional Hospital.

“It goes over the whole cast like a large sock without a heel, and ties at the back of the ankle,” she explained.

“I’ll play at that during the winter and garden in the summer.”

A NEW GARDEN
Betty thought she’d have to leave gardening behind when she sold her home. She had devoted thousands of hours to gardening in the 52 years she’d spent there. She was even on the air for 17 years as CBC’s Information Morning resident gardener in Saint John.

This past summer, her first at the apartment building, she got permission to cut out some of the deadwood in the shrubbery. A man began chatting, and after a while, introduced himself as Narinder Singh, the general manager of all the not-for-profit housing in Saint John.

She seized the opportunity to show him the sorry state of all the gardens surrounding her building. His response: ‘If I give you a budget, would you oversee this project?’

“So I’ve won myself a garden!” she said.

FITTER THAN EVER
Betty and her husband, Anthony, came to New Brunswick from the UK as newlyweds in 1957. He was a teacher at Saint John High School. They had five children in six-and-a-half years, and all were baptized at Trinity, just a few blocks from where she lives. Two of her children have predeceased her.

In 2008, when her daughter in Halifax was dying of cancer and her husband was in palliative care in Saint John with Huntingdon’s disease, she was diagnosed with breast cancer. But, she says, she was too busy and preoccupied to worry about herself, despite undergoing surgery and radiation treatment.

In 2011, she was diagnosed with rheumatoid arthritis, so bad, “there were times when I couldn’t hold a needle,” she said.

“But things are very good. I’ve been very fortunate. I’m feeling fitter now than I was 10 years ago.”

Living in the south end of Saint John, Betty has met a lot of the region’s poorest on the streets. She ministers to them in whatever way she can, but mostly she’s realized they suffer from loneliness and a longing for someone to listen to their story.

She practices her lifelong credo to everyone she meets, including her inner-city neighbours: “Treat everyone the way you’d like to be treated. It’s so simple, yet so hard to do. If we all did that, we’d have no war.”

1. Betty Kennett shows one of hundreds of layreader scarves she has made.

2. Marilyn Lewell of Christ Church Cathedral will take on Betty's role in the new year.

3. The Rev. David Turner and Bishop David Edwards, along with warden of layreaders Cleo Cyr, took Betty to lunch recently to present her with a Layreader Emeritus certificate.

Special thanks to Cleo Cyr for photos of Betty.

Phyllis Cathcart over 1 year ago

Betty you have been a faithful servant of Christ serving the Diocese of Fredericton with love for many, many years and deserve now to use your gifts in other ways, which I see you are already doing!!! Take care.

Ruth Wagg over 1 year ago

Betty , Since I m

Betty ,I firsmade your aquaintance many years ago when you ministered to my mom at the Snow facility in Hampton. I am so pleased to have become a friend. You are truly an inspiration to all who know you. BLESSINGS.

Jim Nutler over 1 year ago

A more precious soul I have seldom known than my Friend Betty...

Tanya McCarthy over 1 year ago

Jim Nutler could not have said more perfect words. Betty Kennett is a precious soul. She is a true example of Jesus' love.