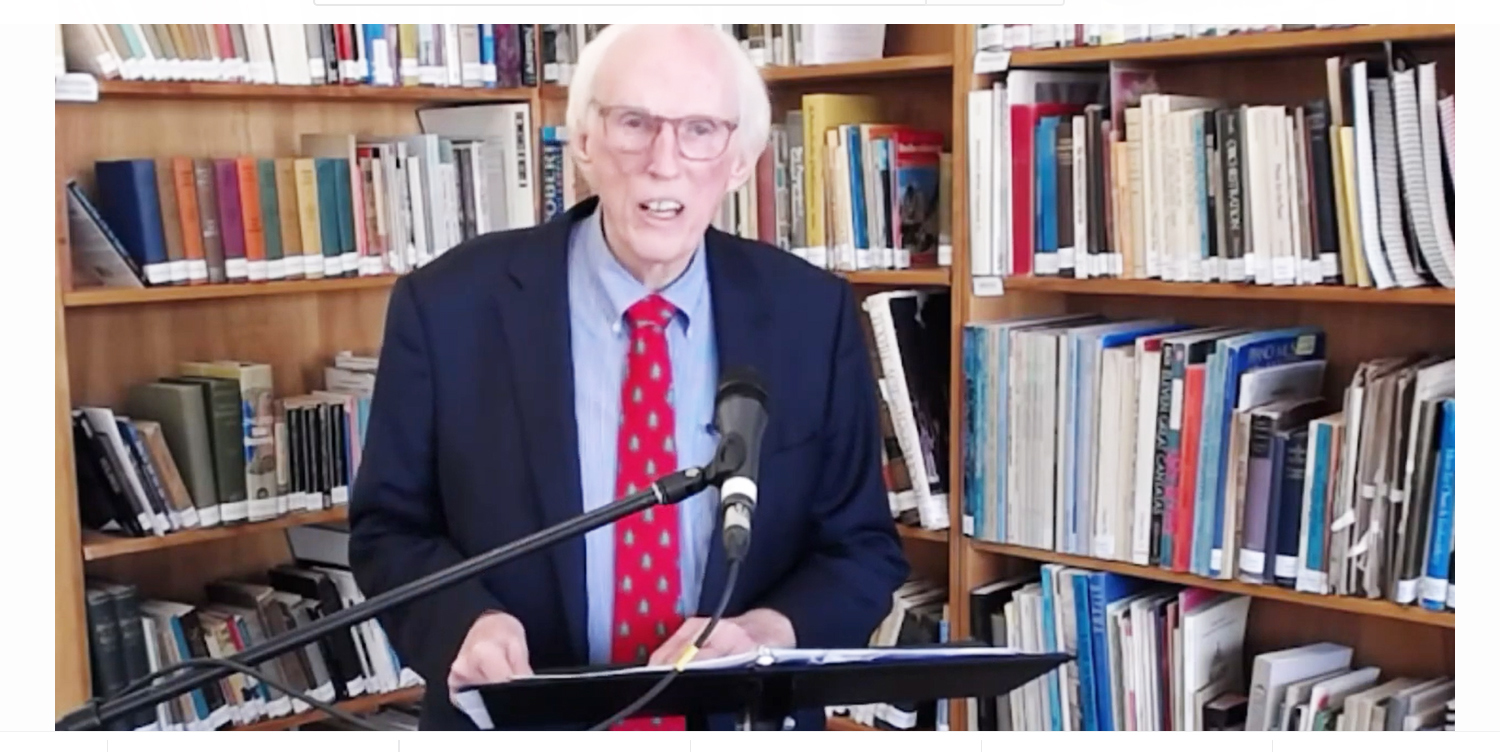 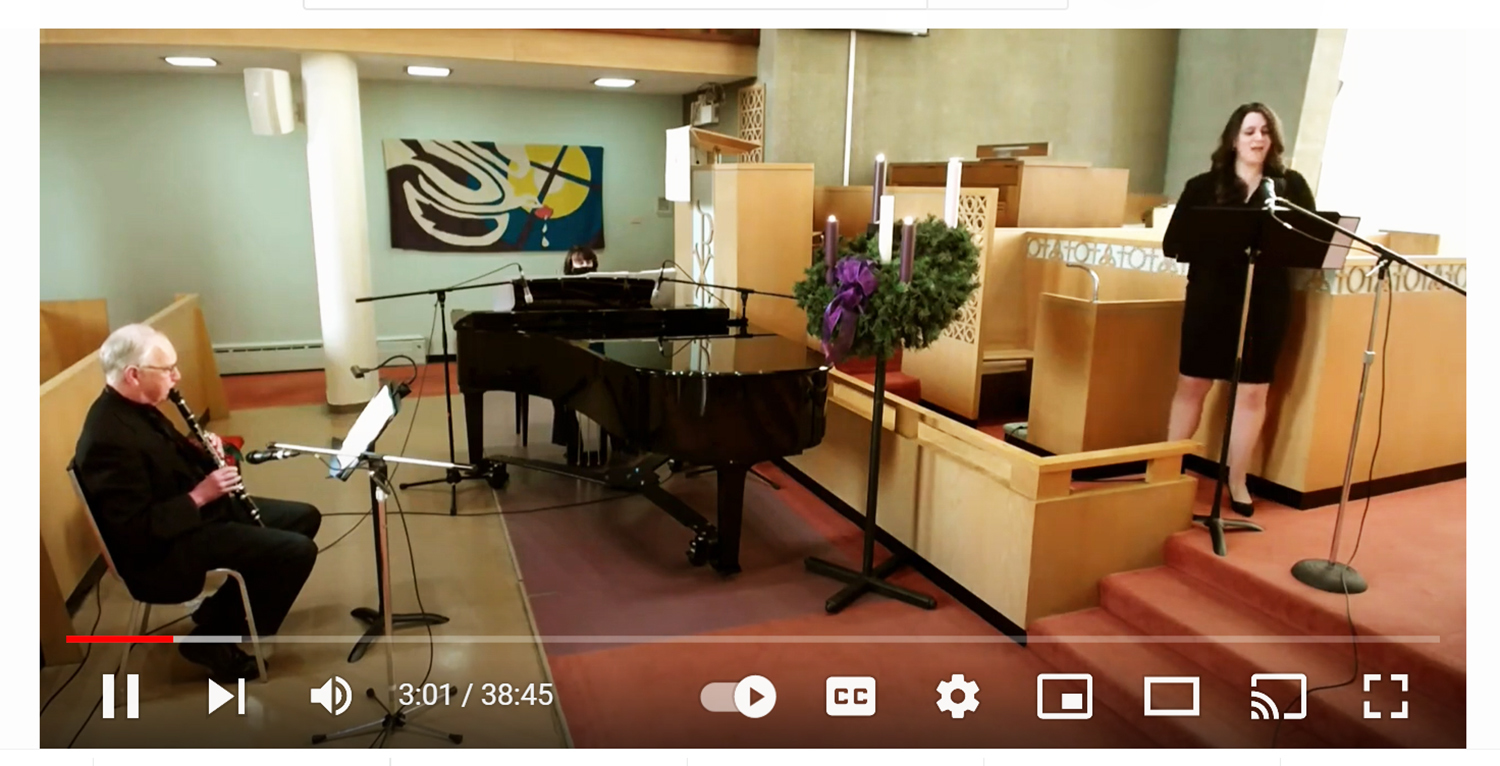 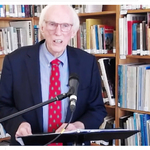 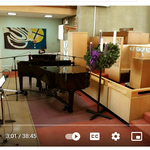 Two more talks complete the series. The second took place Dec. 6, with the Rev. Canon Albert Snelgrove. The third will be posted online Dec. 13, with Dr. Barry Craig. All talks can be found here.  The talks are presented by the Fredericton Christian Forum.

Music set the tone for the talk, by the Alice Boyd trio, featuring Doug Vipond on clarinet and Alice Boyd on piano, with Justine Everett singing O Come Emmanuel.

“My talk today is about recovery from fear, isolation, even anger over this pandemic and all it has caused,” said Bill.

During these many months of pandemic, our emotional reserves are perhaps low. Nevertheless, there is always hope, and this first talk featured the hope brought by John the Baptist.

John was the son of Elizabeth and Zechariah, people of strong faith. John appears in the first century, dressed oddly in “designer desert” rags and eating the scarce and unappetizing foods the desert produced.

He spent his time at the lower end of the Jordan River, about 30 kilometres northeast of Jerusalem and seven km above the Dead Sea.

It was a dry, desolate place, yet people came by the thousands to hear him preach.

“It was the message that drew these people,” said Bill. “It was, in many ways, the gospel of recovery, of second chances.”

John had three “asks” of the people to whom he preached. The first was repentance. Translated, the message was ‘come to your senses,’ let go of your arrogance, your criticisms and stop wasting your life.

Bill cited an episode of The Crown, a popular television series based on the British Royal Family. In the episode, set in the late 1960s, Prince Philip is deeply enthralled by the moon landing.

The following day, after attending church, he harshly describes the sermon as ‘a general anesthetic.’ Then he finds himself addressing a group of Anglican clergy at a retreat house at Windsor Castle.

Exasperated, he tells them, ‘what your lot need to do is get off your backsides and get out into the world and bloody well do something.’ Action is what defines us, not suffering, he said.

Still amazed by the moon landing, the prince arranges to meet the three astronauts. What he finds is three ordinary men, all suffering from colds, agog at the palace — and his esteem for them is crushed.

Then a humbled prince again visits the retreat house, again addressing the clergy there.

‘I now find myself full of respect, admiration and desperation. Help me to find something better,’ was his plea.

He realizes the solution to problems is not rockets, not bravery, but in accepting one’s weakness and finding a grace that lifts you above all that.

“That was one of the most insightful explorations of faith ever seen on television,” said Bill.

John the Baptist’s second “ask” was for people to be baptized, although the act is unique to him and not practised by the prophets before him. Wash yourself of everything negative and start a clean, new life, was the message.

In the Old Testament, the wilderness is always a place of renewal, as in Isaiah 35: 1-2:
The desert and the parched land will be glad; the wilderness will rejoice and blossom. Like the crocus, it will burst into bloom; it will rejoice greatly and shout for joy.

It’s been a year since the announcement of a coming vaccine to combat COVID-19.

“At first we were told it would take 10 years to develop,” said Bill. “Instead, it took four months. I call that a miracle in the wilderness.”

Then Bill told the story of Dr. Kathrin Jansen, now vice-president of vaccine production at Pfizer Inc. In July 2020, she was working with influenza vaccines when she experimented with one on the COVID-19 virus. It worked.

“I think Katherin Jansen and her many colleagues are crocuses in the wilderness,” said Bill.

Born in the communist state of East Germany, Katherin was only three when her family escaped to West Germany in 1961, just before the Berlin Wall was erected. She earned her first PhD in West Germany, and did postdoctoral study in the U.S. She has been a research and development scientist for several drug companies.

“Here is a person God used to be the miracle in this COVID-19 wilderness,” said Bill.

The story of Dr. Jansen reminded him of a favourite poem, I Wake Close To Morning, by Mary Oliver: Why do people keep asking to see God’s identity papers
when the darkness opening into morning is more than enough?

Writing a cheque is great, he said, but when you share a coat or a meal, you see people face-to-face, thereby creating a connection, a community.

Bill told a story of his grandson, Jack, studying business in Guelph. Before an important math exam, his professor encouraged the students to share their notes and study together in small groups. His rationale was that collaboration in the world, especially the business world, is necessary for survival.

“This past year has been deadly for connection, collaboration and community,” said Bill.

John the Baptist’s specific asks were to repent; be baptized; and thirdly, to reinvent community, where we need and care for each other, where loneliness and isolation are no more, he said.

Bill closed with a spoken hymn called O Come Divine Messiah, followed by the Peachtree Benediction:
And now, go in peace, and as you go, please remember that it is by the goodness of God that you were born. And also remember that it is by the grace and mercy of Jesus Christ that you are redeemed, forgiven and set free. As well, remember that none of us leaves this place alone, He goes with us, He promised He would. And while some out there may call us servant, He calls us friend. Therefore, in the strength of that great friendship, we go now from this place to love and to serve, until we meet again.

Norman B McLeod 8 months ago

Bill, I really enjoyed your talk and the message therein.
It was great to be in your presence again.
God bless you Bill.
Norman