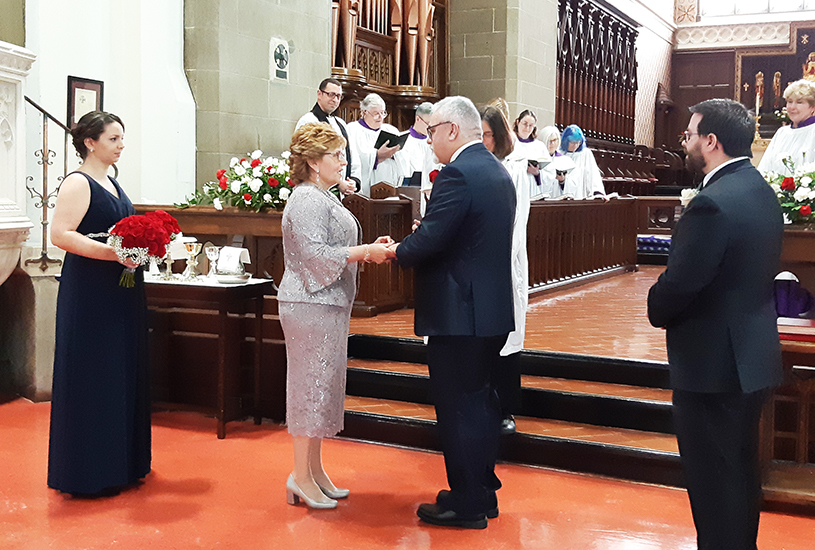 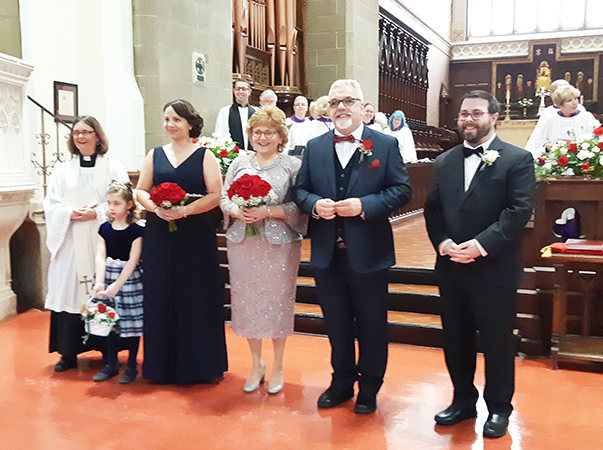 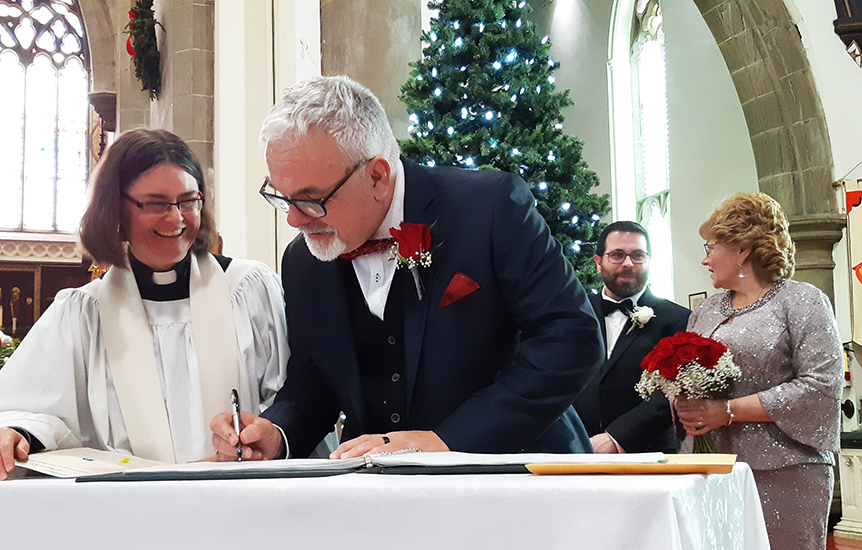 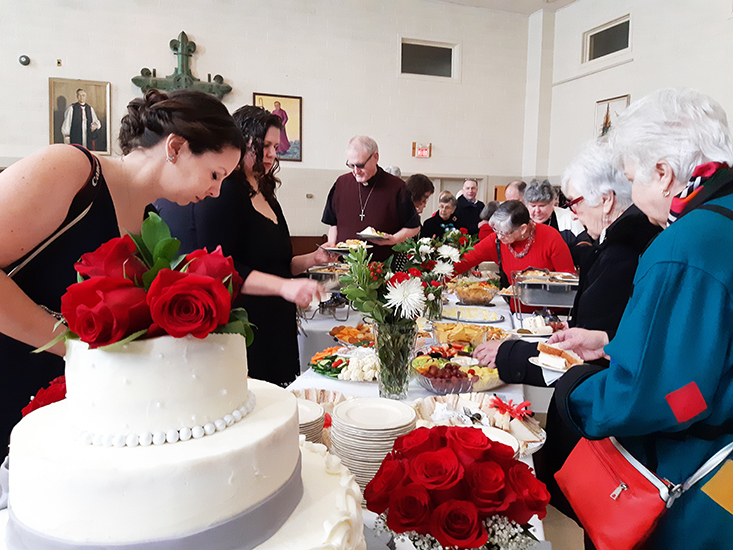 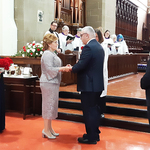 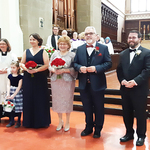 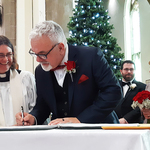 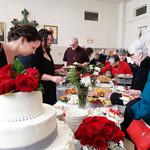 Virtually every seat was full at Christ Church Cathedral on Jan. 4, as about 300 people witnessed the marriage vows of Bishop David Edwards and his long-time friend, Debbie Collicott.

The Ven. Cathy Laskey was the officiant, and the Rev. Michael Caines preached. The best man was the Rev. Paul Ranson, and Debbie’s matron of honour was her daughter, Christy Collicott. Christy’s daughter, Grace, was the flower girl. Ushers were Debbie’s son, Joel, and his partner, Bailey Elliott. Dean of Fredericton Geoffrey Hall was the celebrant. The Cathedral choir was under the direction of Dr. Willis Noble.

The readers, Rebecca Ellis and Coralie Losier, are members of Stone Church (Parish of St. Mark) in Saint John, where David was rector during the 2000s and where he first met Debbie.

Michael Caines preached on the “rugged, resilient love of God.” But first he told a story of the Halifax wedding of the Rev. David Turner in 2002, which happened to take place the same weekend as a meeting of G7 finance ministers.

“Just to get to the church, there were three layers of security,” said Michael. “The protestors were getting ramped up and the police deployed tear gas.”

Just as they walked into the back of the church, “a big green cloud came in with us,” he said. “It was the most emotional wedding I’ve ever seen!”

While the protestors, tear gas and talks among world leaders were a revolution of sorts, he said, “I’d like to point out that there were two revolutions that weekend. One began and ended that weekend; the other revolution is still going.”

Michael referred to the earlier reading of John 2:1-11, the story of Jesus changing the water into wine at the wedding in Cana.

“We see God’s covenant love lean in,” he said. “It’s stubborn. You can’t kill it. It is God’s rugged, resilient love at all costs.”

He noted Mary’s instruction to the servants: ‘Do whatever he tells you.’

During the signing of the register, the Rev. Bob LeBlanc played an instrumental piece. Debbie had heard Bob play it online and asked if he would play it at the wedding. It had no title, so Bob named it Debbie’s Song.

After the ceremony, everyone gathered at Cathedral Memorial Hall for a stand-up reception catered by Edwina’s.

Paul Ranson spoke of knowing Debbie his entire life, and of knowing David half his life. He described Debbie as a gracious woman, even after he spilled a cup of coffee all over the front seat of her new Corolla years ago.

“I guess you christened it,” was her comment, he said.

“David, though, is more of a taker,” he said, to much laughter!

He recounted the story of meeting David, who had just arrived in Canada to work at Church Army (now Threshold Ministries) in Saint John. Paul was working at an Esso station, and David pulled up in his new work vehicle seeking to fill up, but his newly assigned credit card would not work. Paul had to decide whether to trust this stranger.

In her speech, Debbie told the crowd that as she walked down the aisle on the arm of her brother, Dave, “it touched my heart to see everyone.”

She thanked every member of her immediate family for their help and support these past few months and days. She recounted telling her granddaughter that morning, as Grace pulled up Debbie’s zipper, “to always remember this day. It’s not often you get to attend the wedding of your grandmother.”

Debbie took special care to mention her father, Jack Prince, who resides in a nursing home in River Glade and could not attend.

David, in his speech, took a jab at Paul, saying, “It’s always sad that the best man is the best you can get!” and explaining his credit card troubles at the Esso station more than 20 years ago.

He went on to thank the large crowd that had come to witness his wedding, which included a chartered bus to bring Sussex-area parishioners to the ceremony.

“I’m by nature a pessimist,” he said, noting he thought maybe 20 people would show up. Debbie convinced him to order 200 bulletins, and in the end they doubled the order.

David choked up briefly when he mentioned his parents, thanking them “for being my parents.” He also thanked Bea Mealey, whom he called his Canadian mother, for standing in for his mom, who resides in a nursing home in the UK.

The couple bought a home in Fredericton, but will first honeymoon in the UK, where David hopes to introduce his bride to his favourite football team, the Wolverhampton Wolves, which he described as “the other passion in my life.”

1. The exchange of vows

3. Bishop David signs the register, with Cathy Laskey, Paul Ranson and Debbie Collicott in the background.

About Us
The Bishop

Congratulations to the newlyweds. You both have had struggles in life and it is encouraging to see that you have found someone to share your love and life with.

Phyllis Cathcart over 1 year ago

Congratulations +David and Debbie. I hope you have many happy years of marriage.

Ann Balch over 1 year ago

Despite the grandeur of the Cathedral, I believe we all felt we'd just stepped into your living room and were part of the family. Such a joyous occasion, so glad to celebrate with you. May you have many years together!

Richard & Helen Walsh over 1 year ago

David & Debbie,
Although we were unable to attend your wedding, we were certainly thinking of you and praying that all would go well on this your special day. Congratulations and best wished to you for many happy years of marriage! Enjoy your honeymoon and vacation in the UK!
Richard & Helen Walsh

Anne Walling over 1 year ago

Congratulations. Wishing you all the best of this very happy occasion.