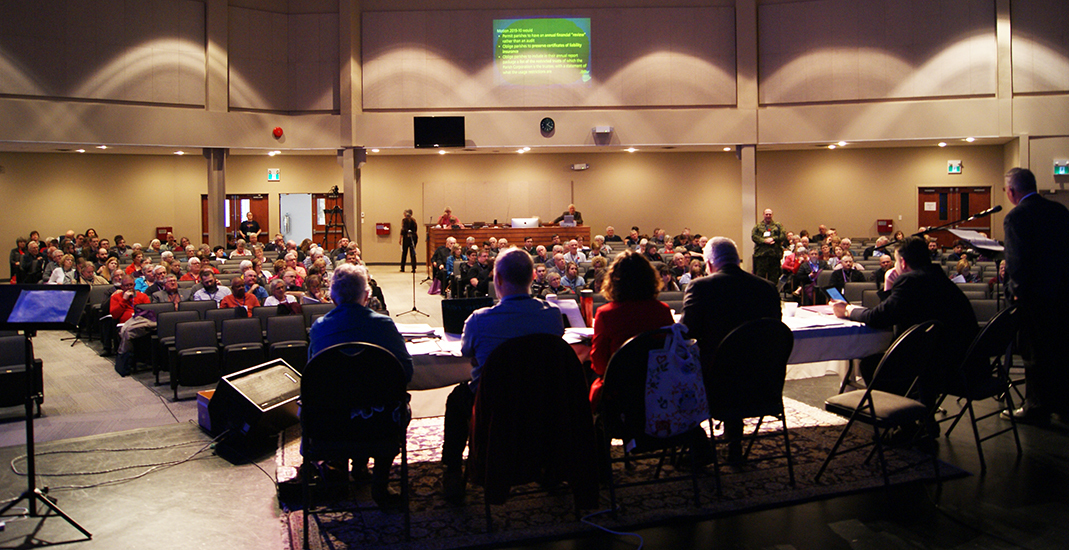 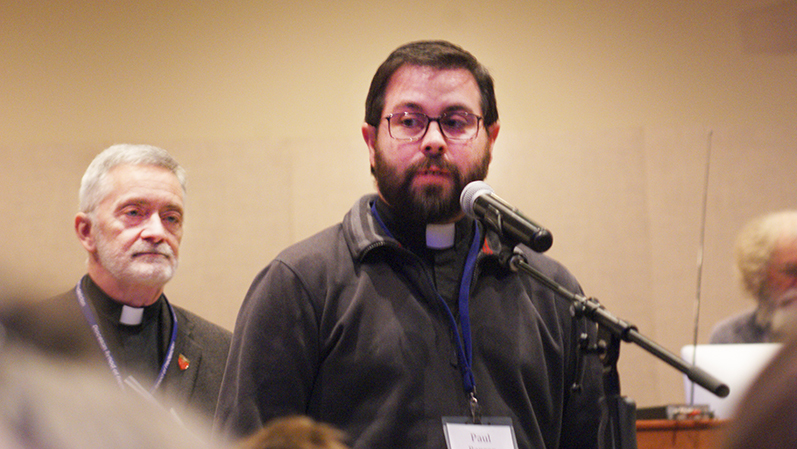 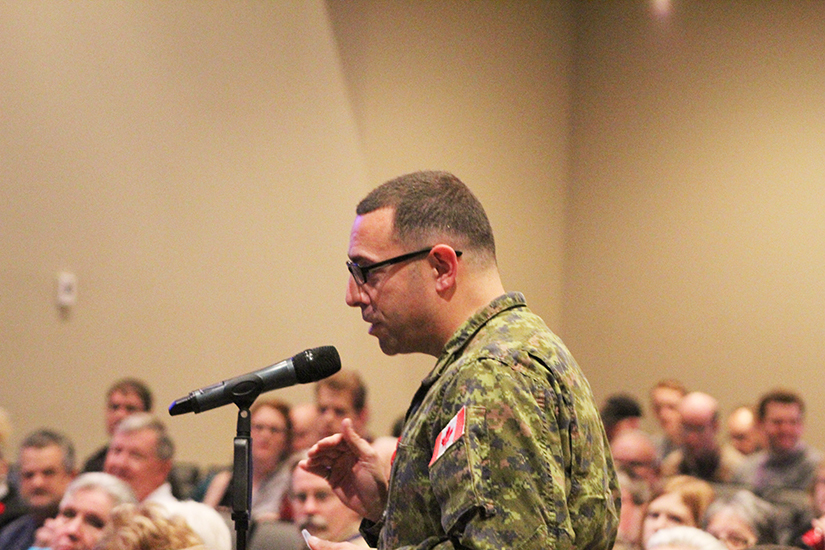 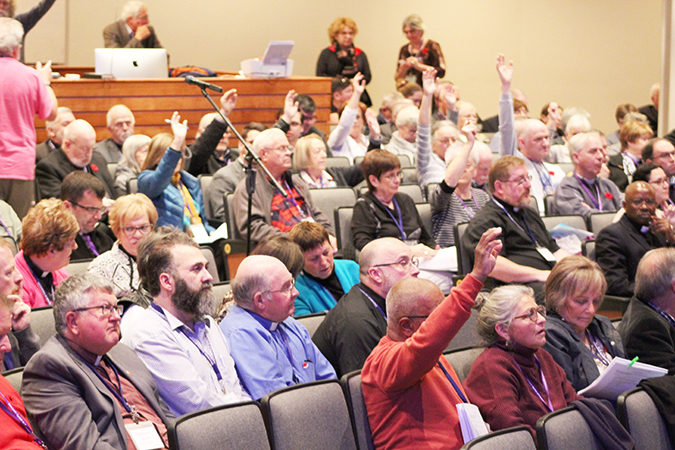 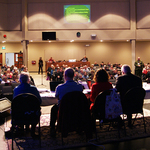 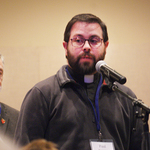 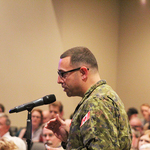 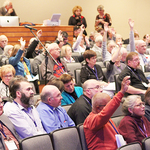 For the 137th time, Diocesan Synod gathered to debate and decide on its future path, this time at Journey Wesleyan Church in Fredericton on Nov. 2.

A quorum was declared early in the day, with 67 of 80 clergy delegates and 131 of 169 laity delegates in attendance. Many others, including invited guests, observers, musicians and diocesan staff were also present.

One of the first orders of business was an explanation of why several clergy were dressed in military uniforms. The Rev. Michael Caines, one of several military chaplains from the diocese in the Canadian Armed Forces Reserve Force, told the crowd that their choice of dress was to encourage other clergy to consider military chaplaincy, as there is a pronounced need across the country.

Morning Prayer was enhanced by the music of three women who led worship during the Deep Roots diocesan gathering in June: Joni Richardson and Alysa Melanson on vocals and L.J. Smith on keyboard.

BISHOP’S CHARGE
Bishop David Edwards presented his charge, beginning with appreciation for the decision to cancel last year’s synod because of his wife Janet’s sudden illness. He also thanked everyone for their support in the past year after Janet’s death.

The focus of the charge was mission.

“During my time as Bishop, my emphasis has been on mission and partnership. I have been impressed how this has been taken up,” he said.

“I constantly find that as I visit parishes, I am told about the ways in which things are being done for others: the knitting of hats for babies, the making of prayer shawls, bowling to help feed hungry children, and so on.”

“Today we will begin an intentional response to these inspirational events,” he said.

The first was a motion voted on later in the day to join the rest of the Anglican Communion in the “Season of Intentional Discipleship,” an invitation to commit our lives to learn everything about Jesus and as much as possible, live like Him.

The second was a call for every parish to devise a Mission Action Plan (MAP).

“There will be resources available for this,” said the bishop, adding they could be simple or complex plans, as the need dictates.

“If that means dropping something internal to do something external, then so be it,” he said.

Bishop David spoke of the 2019 General Synod, highlighting the many positive initiative that were sadly overshadowed by the Marriage Canon vote, which did not receive enough votes in the House of Bishops to include same-gender marriage as a sacrament in the church.

“I want us to concentrate on the cure of souls in this province, to provide innovative ministries and traditional ministries, to educate followers, to establish partnerships with other entities for the good of our communities, following the Five Marks of Mission,” he said.

“Our purpose is to extend the Kingdom of God, to change our communities, to see men and women, boys and girls come to know Jesus.

“That is my passion. I pray it will be all our passions,” he said.

To read the Bishop’s Charge in its entirety, click here.

MOTIONS
There were 18 non-procedural motions put forth during the day, all but one of which were passed. Most dealt with canon changes to reflect the reality of the time and the necessary change of wording.

However, the first motion, to reduce the age range for a parish’s third delegate to synod, took the most time and prompted the most response, both for and against.

At the 2017 Diocesan Synod, the upper age of a youth delegate was raised from 25 to 35, though it also prompted much debate. Immediately afterward, there was a plan to bring this motion back to synod, with the hope of lowering the age back to 25.

This time, with about 20 synod members arguing for or against, the vote showed not everyone wanted the change, and the motion was lost.

Parish development officer Shawn Branch explained the history of the Season of Intentional Discipleship, a world-wide Anglican initiative, and the need for the Diocese of Fredericton to join it.

It and the Missional Action Plan (MAP) for parishes, both of which were motions, were unanimously adopted.

The Revs. Leo Martin and Paul Ranson co-authored a unity motion in response to the outcome of the marriage canon vote at General Synod in July. Leo introduced the motion with these words:

We bring this motion forward with the idea that even though we may disagree on certain definitions in the Church, we believe we are all called to co-exist and to promote — by example — the ministry of reconciliation to ourselves as a body, and to others.

Over the past years, we have faced some rough periods. We have been polarized on the definition of marriage within the Church. Disagreements and debates are normal, and they often happen around our dining room tables; but polarization can be detrimental to the model of Christian behaviour we are all called to show.

So I move this motion, seconded by the Rev. Paul Ranson, NOT to reopen the debate, but in the hope that we stand as one body, embracing our differences and committing ourselves, under the banner and leadership of Jesus Christ, to work and walk together in unity towards the mission which is set before us.

There was one comment at the microphone, and the motion passed unanimously.

LUNCH
The venue of Journey Wesleyan Church was new for the diocese, and offered one-level access, large and comfortable theatre-style seating, and a separate gym for the noon meal. Lunch was catered by a large crew from the Parish of Douglas & Nashwaaksis, and included an array of choices: sandwiches in many varieties, vegetables, nachos and dip, fruit kebobs, pastries and ice cream sundaes.

The diocese normally sends a six-person delegation to Provincial Synod: bishop, youth delegate, two clergy and two laity. Assuming everyone is able to participate at the 2021 synod, our delegation will include Bishop David Edwards, Kevin McAllister, Rob Langmaid, Robert Taylor and Laura McNulty. No youth were nominated for the Nov. 2 election.

The diocese usually sends an eight-person delegation including the bishop, one youth delegate, three clergy and three laity. Assuming everyone is able to participate in 2022, our delegation would include Bishop David, Eric Beek, Cathy Laskey, Ann Fairweather, Wandlyn Snelgrove, David Bell, Peter Irish and Laura McNulty.

OTHER
Guests Neale Bennet and Audrey Lounder addressed the delegates and thanked Diocesan Synod for the invitation to attend.

Richard Walsh, of the Parish of Chatham, gave the response to the bishop’s charge, saying, “Thank you for being our Good Shepherd, for guiding us at this time, for teaching us in such an inspiring manner. God bless you abundantly, Bishop David.”

Kathy Asch, Parish of Woodstock, presented the final motion, which was to send greetings from Synod to a long list of people, beginning with HRH Queen Elizabeth, to our political leaders and our church leaders near and far.

Bishop David offered some closing remarks: “Thank you for the debate. As a diocese we need to continue to work our way through how we do mission and how we do evangelism.”

Just before closing, he introduced his fiancée, Debbie Collicott, and invited everyone to their wedding, taking place Jan. 4 at Christ Church Cathedral. (You must RSVP; see the story in the November paper; or the ad in the December paper).

The day ended with worship and Evening Prayer.

“In general, I think Diocesan Synod was a good event. We managed to make significant adjustments to some of our Canons to reflect practice.

“There were also good levels of debate around important issues, which led to good ideas coming forward, which could make a difference in the future.

“I felt that in the main the venue was good, though there are clearly some wrinkles to work out with regard to use of space. It was particularly important to have good access to seating. I also think the dining area worked well for us.

“I am grateful to everyone who participated in many different ways to enable things to run smoothly.”
More coverage of Diocesan Synod will appear in the January edition of the NB Anglican, including stories on the motion to change the definition of youth delegate, a more in-depth look at the motions and the Bishop’s Charge.

1. Overall view of the 137th Diocesan Synod, taken from behind the head table. Gary Barfitt photo

2. The Rev. Paul Ranson speaks on the unity motion, with the Rev. Canon Leo Martin at left. Gary Barfitt photo

4. Vote counting during one of the many votes during the Diocesan Synod. Derwin Gowan photo

About Us
Synod
Comments for this post are now off.