Calithumpians present Medley Medley 2020 as part of their summer program 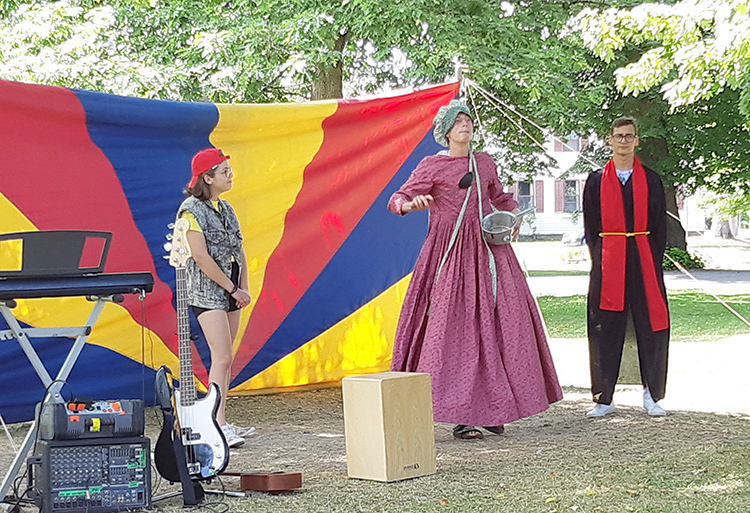 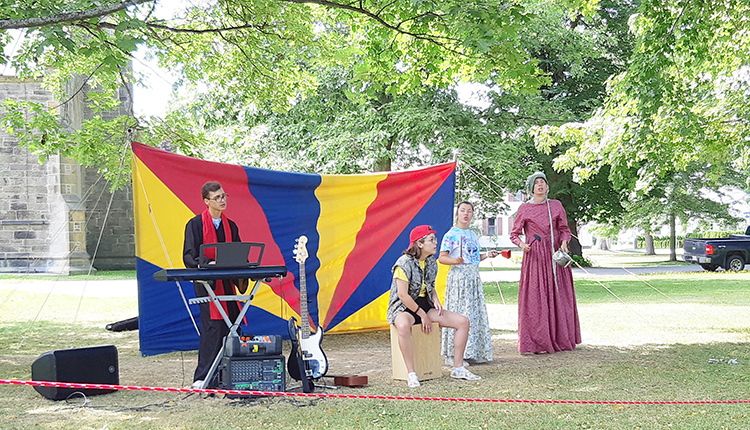 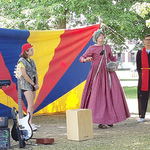 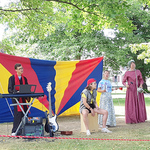 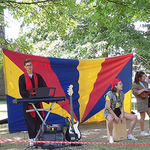 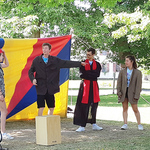 The Calithumpians, an annual outdoor theatre troupe in downtown Fredericton, has incorporated the 175th anniversary of the building of Christ Church Cathedral — and the birth of the diocese — into their summer repertoire.

“Medley Medley 2020” is the name of a musical skit performed by Calithumpian members Lars Schwarz, Sebastian Vanicek, Mélanie Dupuis and Elena Hrkalovic. It’s one of four presentations by the troupe this summer.

The Medley presentation illustrates many aspects of the life of Bishop John Medley and the building of the Cathedral, which began in 1845. The show is performed on the Cathedral Green, their new home since their usual venue, Officers Square, is closed this summer.

“We don’t really have a script,” said Will Pacey, artistic director. “Some of it is improv. We write a script at the end of the summer.”

Nevertheless, the story follows a young organist who sneaks into the Cathedral to play, and her conversation with two resident bats, all of whom come across the ghosts of Medley, his first and second wives Christiana and Margaret, plus the two architects who built the structure, Frank Wills and William Butterfield.

One of the signature aspects of the Calithumpians is their ability to adapt their own lyrics to well-known songs to illustrate the stories they tell. In this case, they took “We Built This City (On Rock n’ Roll), and changed it to “He Built This City (a Cathedral).”

Much of the banter and songs recount the history of Medley’s arrival from Exeter, UK in 1845, the two architects, and the style of the church — gothic revival.

“It’s the first example of gothic revival in Atlantic Canada,” says one character, noting that Notre Dame in Paris is gothic and Christ Church Cathedral is gothic revival.

Then there is the curious fact that the stained glass, coming across the Atlantic, was stored in the ship’s hull in molasses to keep it from breaking.

“I was eating molasses cookies for years and years afterwards,” says William Butterfield.

The characters also note that Fredericton had a population of about 4,000, and in order to have a cathedral, a community needed at least 10,000 people. But Queen Victoria gave John Medley “extra special permission” — the only place in Canada to get this favour from the Queen.

The troupe delved into another piece of history, the anonymous donation that, after a daylong prayer session, materialized. The story goes that building funds were depleted, so Medley prayed and prayed. By evening, an envelope containing £500 materialized. On it were the initials FSM.

While Medley never knew, or revealed, who FSM was, he did have those initials engraved in the stone wall behind the eagle lectern inside the Cathedral as thanks.

To the tune of Come On, Eileen by Dexys Midnight Runners — “Come on, Eileen, Too loo rye aye / I Need To Thank You, F-S-M” — the troupe offered several solutions to the mystery, including Found Sum of Money; Financially Strained Medley; Frances, Sophia and Mary (friends in Exeter); and Found Sewage Money (from rats that had stockpiled stolen coins in the sewers!).

They also incorporated the old story of Mrs. Medley bringing her husband his supper each evening (tomato soup, in this case); the clock, believed to be a prototype of the clock in Big Ben; the Cathedral fires; and the fact that Margaret Medley, wife number two, had been a nurse to Christiana, wife number one.

One song was to the tune of Monster Mash, called Cathedral Lore. It included old and new information, mentioning Bishop’s Court having been used as an emergency shelter, and the Monday Morning Outreach program that assists the needy in the city.

The cast noted that writing Medley Medley 2020 was a challenge.

“It was the hardest one [of the repertoire],” said Mélanie Dupuis. ‘We didn’t want it to be just the history.”

The Medley Medley 2020 performance has been ongoing throughout the summer, and has only one more performance left, on Monday, Aug. 31 at 12:15 p.m. on the Cathedral Green. Picnic tables are provided for seating. You must sign in for contract tracing purposes.

He Built This City (A Cathedral), adapted from the original, We Built This City, written by Bernie Taupin, Martin Page, Dennis Lambert and Peter Wolf, originally performed by Jefferson Starship

Say you don't know him // or recognize his face.
Say that’s Bishop Medley // he started this place.
Came across the ocean // to start a diocese.
Building a cathedral // it was not a breeze.
John Medley plays the organ, listen to the church bells ring.
You don’t remember?
He built this city. He built this city a cathedral.

Bishop Medley’s praying, for some extra funds
To finish off the spire, and finally be done.
Slipped under his doorway, came 500 pounds
From the secretive FSM, they have not been found.