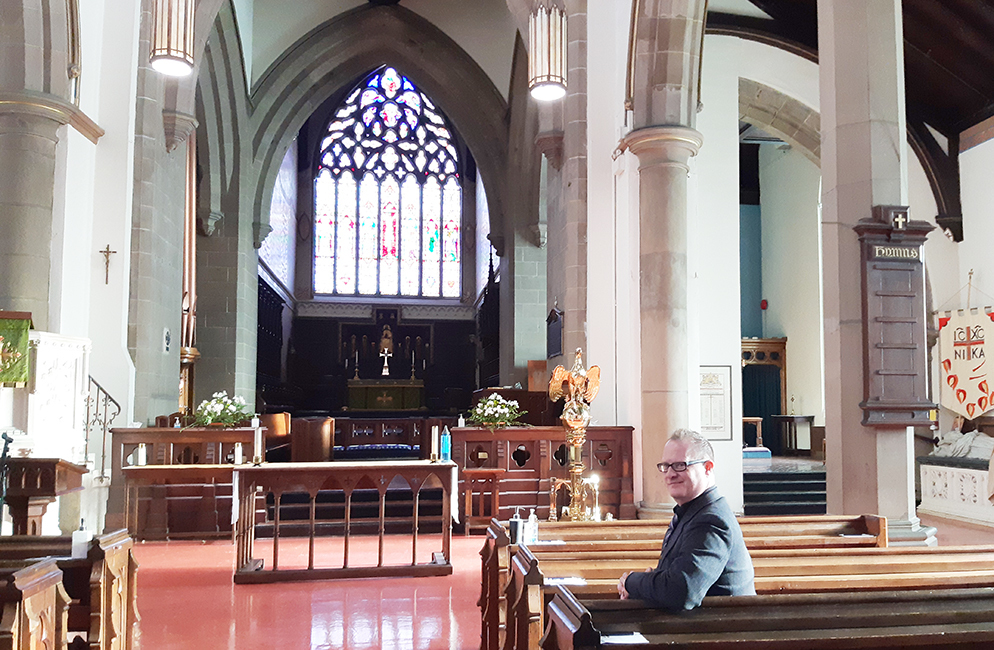 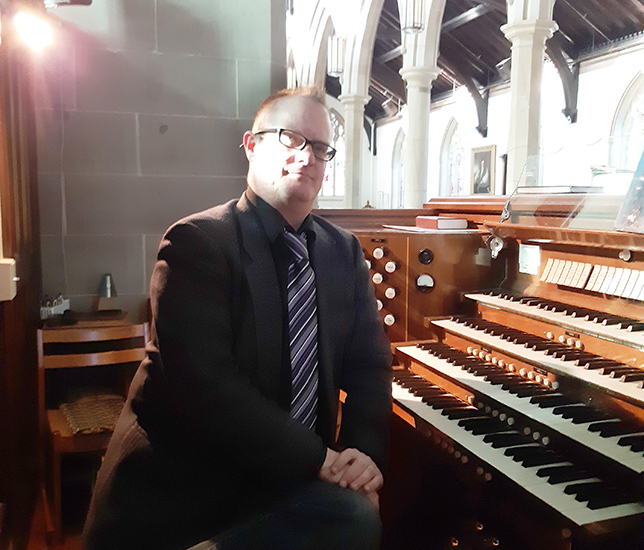 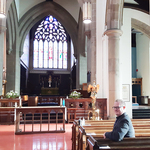 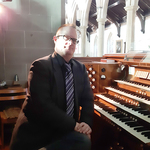 Some call it happenstance. Others call it God’s hand.

Thomas Gonder believes it was definitely God’s hand that brought him to Fredericton — specifically to Christ Church Cathedral as its new director of music. He began his role here in early January.

Thomas, 48 and originally from London, Ont., lived in Toronto for more than 12 years, working as an organist in Anglican Churches. His path to New Brunswick began last summer, when he was invited by Leo Marchildon to perform at St. Dunstan’s Roman Catholic Basilica in Charlottetown.

“I’d seen pictures, so I thought, ‘why not see if I can play there,’” he said. “Might as well make the trip more worthwhile.”

So he wrote to then-director of music, David Drinkell, who extended a hearty invitation. Thomas spent four or five days in the city, and loved every minute.

“I played an organ concert here on a Saturday night,” he said. “There were about 100 people there. I thought I might get 20.”

But while preparing to return to Toronto, he realized he didn’t really want to leave.

“I was overwhelmed by the kindness of strangers, the enthusiasm people have for music,” he said. “I was surrounded by trees instead of condos.

“When I went back to Toronto, I sank into a bit of a depression. I felt as if I really connected to this place in a specific way — not just with the Cathedral, but with the whole city. I crave nature and I couldn’t find that in Toronto.”

The sad and untimely death of David Drinkell later that fall opened up an opportunity that Thomas did not see coming. He’d struck up a Facebook friendship with Elspeth, David’s wife, and had lively correspondence with David. Now he realizes his August visit to the city was all God’s plan, not his. When the vacancy appeared, he felt he had to apply.

With an offer in hand, Thomas left St. Matthew’s Anglican Church in Islington, in the Diocese of Toronto, to direct music in his first cathedral, and he couldn’t be happier.

“The draw to come here was irresistible,” he said. “I didn’t need this job. I had one I really liked, but I had to take this chance.

“I was growing so weary of Toronto — the cost of living, the hustle and bustle, the noise — it became too much for me. It was wearing down my senses.”

Now he walks to work via Odell Park, and revels in the bird song and the smell of trees, things he has sorely missed for many years. Moving to a new city in the middle of winter isn’t ideal, he said, but he’s enjoying the nature, the people and the work.

“I feel like it’s healing me,” he said. “Now that I’m here, all those feelings I had are confirmed.”

THE PEOPLE
What Thomas has found so far is a group of people — the choir and the 11:45 worship band — who are enthusiastic and skilled.

“I get to work with such a terrific choir,” he said. “And the 11:45 worship band is so talented. Everyone has made it very easy for me. I feel no stress.”

He’s also thrilled to return to his roots, “being able to play all aspects of Anglican liturgical music. I feel like a kid again!”

His great love of church music began when he was 10 years old, joining the choir at St. Paul’s Cathedral in London.

“It was a revelation, if 10-year-olds can have revelations,” he said. “I’ll never forget that moment.”

THE PLANS
He describes himself as a concert organist and liturgical musician, and he aims to put those talents to good use. As for the work, he’s got big plans.

At St. Matthews, he and the parish replaced the organ through a vigorous fundraising campaign and he hopes to use that experience here. The Christ Church Cathedral organ was last rebuilt in 1981, and Thomas believes it’s overdue.

“The goal is to renovate this instrument,” he said. “It’s showing wear and tear. Oddly enough, it’s a bit big for its environment. I think it needs to be reimagined for the space.”

Thomas sees that as a long-term project of up to 10 years, but in the end, “this could be the finest instrument in the Maritimes.”

He also sees a great deal of potential in the Cathedral itself: a beacon of inspiration for the diocese, a centre for arts and culture, a dynamic music program to share with the community.

“My goal is to make the Cathedral what most cathedrals have been for centuries — a centre for the arts,” he said.

Recently, as he listened to Dean Geoffrey Hall preach, he was struck by the sermon’s theme: ‘hearing the call, answering the call.’

“I had no urgency to leave my job, but I had to answer the call,” he said.

PHOTOS: Thomas Gonder, director of music at Christ Church Cathedral, admires the beauty of his new workplace; Thomas at the organ.  McKnight photos

Marilyn Lewell over 2 years ago

We are very glad Thomas is here and settling in well.

Norman McLeod over 2 years ago

An uplifting and amazing story.
God at work.
Norman

Ruth Gorlick over 2 years ago

A great witness of answering Gods Call. !! Welcome and may your Journey here at the Cathedral bless you and be a blessing to all who worship there !!