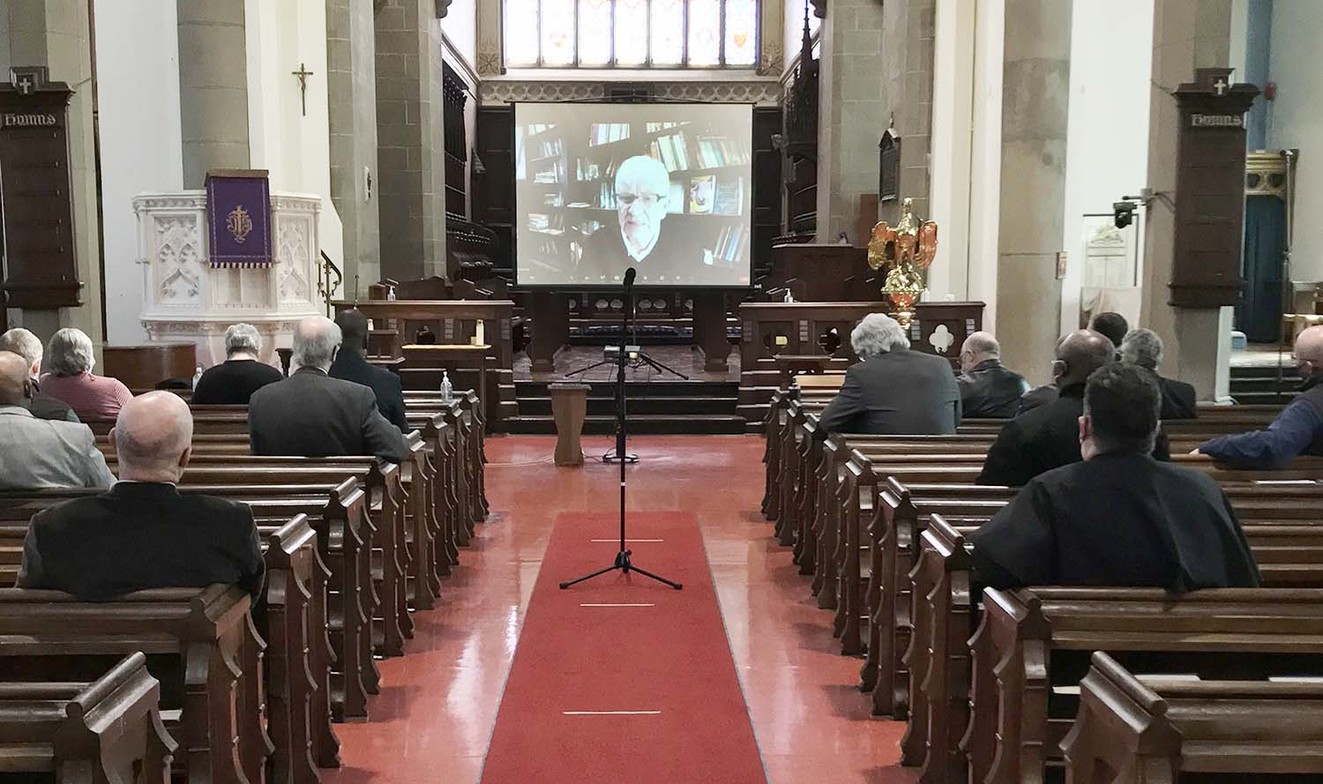 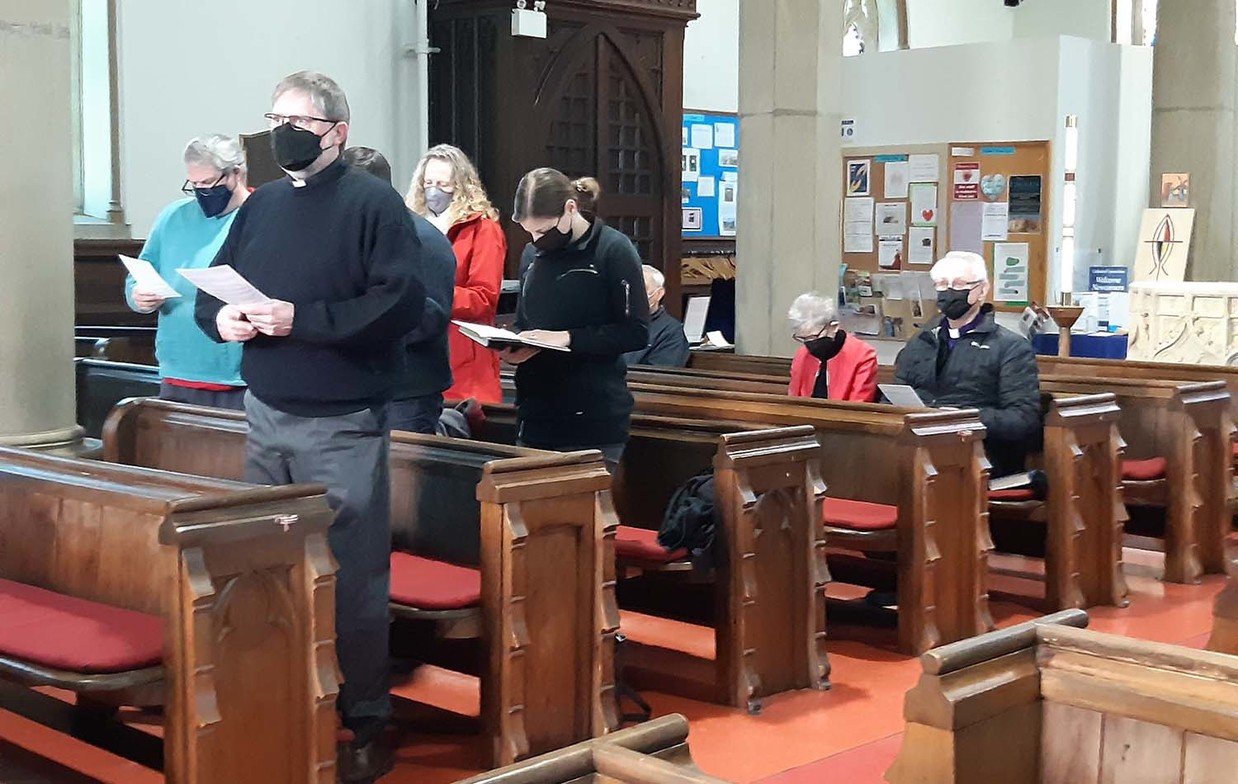 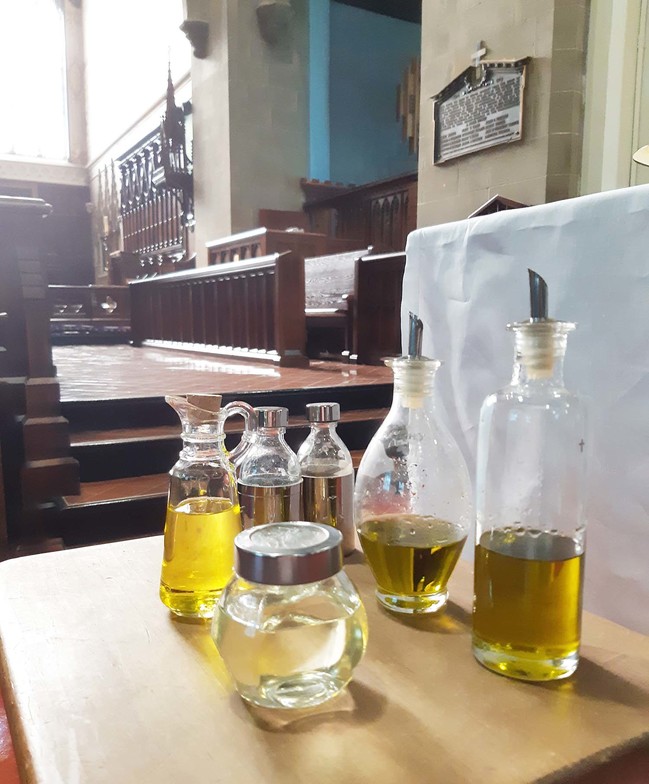 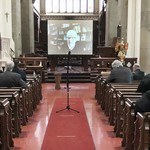 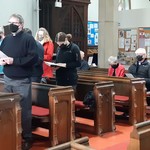 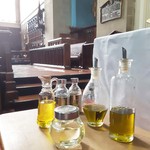 The need for discernment in these uncertain times was the theme of an all-day gathering March 30 at Christ Church Cathedral.

The event began with the annual Blessing of Oils and Renewal of Vows of Ministry. About 40 listened as Archbishop David Edwards preached about the pandemic, its aftermath and the role of the church in that.

“I am reminded of the letter I sent out two years ago, when it all began, about the government closure for two weeks, and saying ‘I think we’ll be back by Palm Sunday,” he said with a wry laugh.

Two years later, everyone is exhausted, unsure and hesitant, particularly those in ministry.

David reminded those gathered of the 40 days Jesus spent in the wilderness and its aftermath. Jesus didn’t go straight into ministry. Instead, he took some time.

“As we move into this changing phase, we, too, need to take some time,” he said. “In ministry, in leadership, we’ve seen changes, and all kinds of things have happened to us.

“All of that has been a great disruption, and we need to take time to pray. Those with leadership responsibility need to encourage congregations to pray. We need to spend time being refreshed by God.”

In his travels, David has heard many outline all their post-COVID parish plans, but he cautioned people.

“I want to say, let’s take some time. God has a path out of this, but we must take time to listen,” he said.

The pandemic disruptions have put issues into abeyance, but they’re still there and need to be dealt with. How we deal with them is going to require discernment — listening prayerfully for the Holy Spirit’s guidance, he said.

“I’m hammering this point home for a reason. The Spirit is saying we need to do things differently.”

CLERGY DAY
The afternoon session was entitled “The Church Beyond the Pandemic.” About 25 clergy remained for the Zoom presentation by Dr. Alan Roxburgh, a pastor, teacher, writer and consultant with more than 30 years experience in church leadership. Some might remember he led a diocesan webinar in 2020.

Alan immediately echoed David’s morning homily about the need for discernment, though he had not heard David speak.

“It’s a waste of time for us to just rush back in,” said Alan to open his presentation. “It’s a great opportunity to be thinking about what we need to be doing.”

In his work, Alan speaks with all sorts of ministry leaders, one of whom recently said, ‘As a leader, it feels like I’ve had my ladder against the wrong wall.’

That’s not an uncommon response to the questions of ‘where are we now?’ and ‘where are we going?’ said Alan, but he added what some might call a surprising and uncomfortable statement:

“COVID was never the issue. COVID was an event that sped up the underlying issues, the dysfunctional problems.”

Now, as COVID seems to be ending, there is an acceleration of these issues, and they aren’t going away.

The dysfunction, he said, is that for a long time, we’ve been living inside a particular story that gave us success early on, but that’s not coming back. That story began at the end of the Second World War, with an expanding economy and a growing population of baby boomers.

Its hallmarks were management, technology, predictability, growth, economic power and the emergence of a new middle class.

“We constructed our churches around that post-war period,” he said. “It was a unique and strange time.

“Very quickly, churches bought that story. It worked great, but that story is rapidly coming to an end.”

Now there is the growing discovery that our methods of the past 75 years cannot address the issues that surround us.

“It’s not about recovering from COVID. COVID has exposed these deeper issues.

“We have lived in a story. We believed that story. We shaped our institutions and programs around that story,” he said.

But there is another story: this is God’s world, and God is acting in the world, remaking it. Alan believes the best response to this change is to “be rooted in the local.”

“Our work in the local isn’t what program or trend to go with, it’s discernment,” he said. “It’s the remaking of the church.”

Alan gave several examples of churches which began their strategic change simply by gathering with their neighbours to share a meal, or gathering in homes to worship. Some have no plans to go back to a regular in-church Sunday service.

The change we face is bound to produce anxiety, disorientation and various responses.

So how do we go forward into this new world?

Alan cited two scriptural examples of how to move forward. Jeremiah 29 tells the story, in 587 BC, of Israelites who had relied on their intelligence, alliances and God’s blessing to succeed. But their story was wiped away, and they found themselves in exile.

“The book of Jeremiah is not primarily about exile,” said Alan. “There was no going back.”

Instead, Jeremiah told the Israelites to build houses, have families and get back to living where they were.

‘In there you will discover the future I have for you.’

The second scripture was Luke 10: 1-12, instructions for early Christians devastated by the destruction of Jerusalem as they awaited the return of Christ.

“What do you do when the story in which you live is torn apart?” asked Alan. “You go back to your neighbours, you let go of it all and join with them.”

As we listen to our neighbours’ stories, ask this: where are we hearing God’s voice? he said.

Alan took questions from clergy, many of which centred around getting people on board for the changes to come.

David summed up the day by further pressing his point to seek discernment.

“Seek where the Lord is leading us,” he said. “We have to believe and trust where, even if it’s into a different place.

“You might have noticed I’ve not been very upbeat today. It’s because I think we’re in a very serious place.”

3. The blessing of the oils.