Connected to her ancestors

One woman’s study of graveyards reveals a progressive history at St. Peter’s 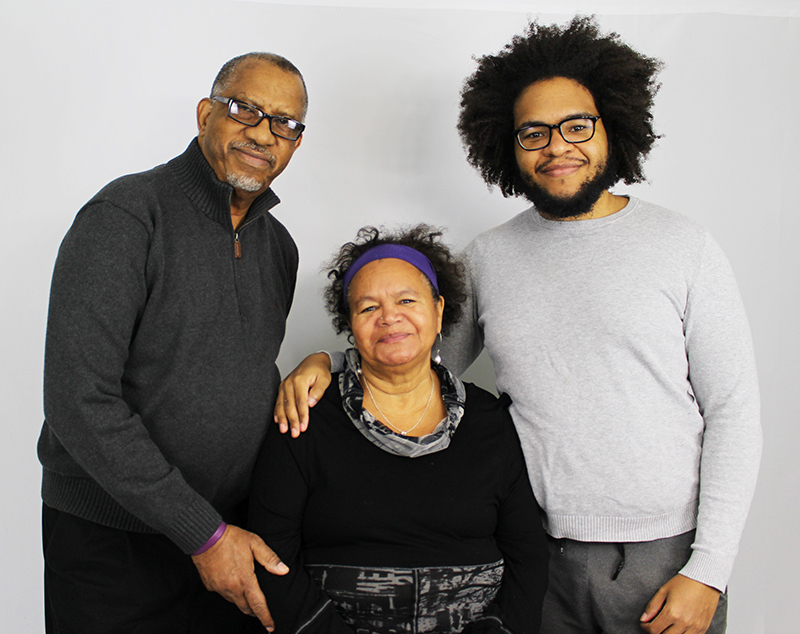 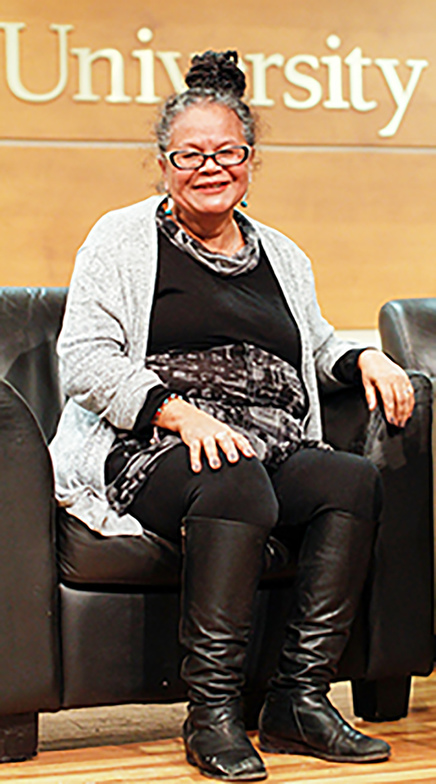 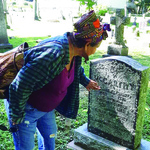 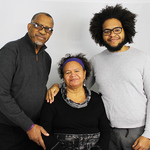 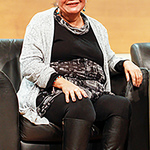 Dr. Mary Louise McCarthy-Brandt was always a curious child. Not just curious, actually. Some might even say a bit meddlesome.

“I refused to be placated,” she said. “That’s why I always ended up in the principal’s office!”

As a child and then an adult, she always had questions — and she asked them.

“Growing up with my brown skin, I always analyzed everything,” she said. “Who benefits, who makes decisions? Are my ancestors’ voices included in the decisions? I wanted to understand more. I have a spirit in me that demands justice.”

Where she got this spirit is a mystery to Mary. She remembers her beloved mother, whose response to racism in her town of Woodstock, N.B. was to cross the street, hold your head high and walk on.

“I’m not made of that mixture,” she said. “I would argue with my mother about it.”

She recalled an incident when her son was in elementary school. The children had to line up two by two and hold hands. The girl he was paired with refused to hold his hand because it was “dirty.” Her mother’s response was ‘that’s part of life.’ Mary’s response was a visit to the school to set things right.

The woman she became just defended her doctoral thesis at the University of Toronto, and a large part of that thesis is centred on who is buried in the Parish of St. Peter’s cemetery and where.

FAMILY & ST. PETER’S HISTORY
Mary now lives in Fredericton, and her ancestral roots reach back a long way at St. Peter’s on Woodstock Road. Her fifth great grandmother, Sabina, arrived in what is now New Brunswick in 1784. She was the paid servant/slave of lawyer and Loyalist Isaac Allen, who fathered two of her children. Sabina’s son, George Leek, was the main carpenter of St. Peter’s church in 1837.

Mary has three sets of grandparents buried in the cemetery there. Mary’s father, Arthur William McCarthy, is on a list in the church foyer of parish men who went off to fight in the Second World War. While she was not raised an Anglican, she holds St. Peter’s in high regard and often attends.

“I feel very welcome there. I feel a sense of belonging. I feel connected,” she said, adding that she and the Rev. Canon Dr. Ross Hebb share a great love of history, and she applauds his interest in the Black roots of the parish. “I’ve found a real supporter in Rev. Hebb.”

EDUCATION
Mary left home when she finished high school, and lived, worked and/or studied in Moncton, Halifax, Fredericton and Toronto. By 1987 she was a single parent working as a medical secretary in Toronto. She began studying sociology at York University, graduating in 1991.

That was the same year she began working for the federal, and then the provincial governments as an employment counsellor in Fredericton. But by the turn of the century, she knew she needed more.

So she began a Masters program in the Faculty of Education at the University of New Brunswick. At first she pursued adult education, but soon transferred to a program called Critical Studies. Critical Studies, she explained, “asks you to peel back the layers,” to investigate and challenge the power dynamic — the perfect program for that inquisitive child always looking for answers.

Through these years, Mary worked full time, raised her son, served a term as president of the New Brunswick Black History Society, and investigated a lot of cemeteries — specifically cemeteries where early Black settlers were buried.

She sits on the Kingsclear Kilburn Community Cemetery restoration committee. In the 1960s, it had been moved to make way for the Mactaquac Dam. It had a segregated space for Black settlers and was one of five similar cemeteries that Mary was aware of.  Mary’s research was in York and Carleton counties, and one area in Charlotte.

And of course, the cemetery at St. Peter’s was of great interest to her. She was delighted to discover St. Peter’s did not segregate its Black parishioners in the cemetery.

“It’s the only graveyard I know of where Black people are interburied with white,” she said. “It’s quite unique in New Brunswick.

“Rev. Hebb would say it’s because the parishioners were one in Christ.”

Mary earned the Masters degree in Critical Studies in 2007. But there were more things to discover, more questions to ask, and more that she needed to say. After the death of her mother in 2009, she felt freer to leave New Brunswick to pursue a doctoral degree.

“I never expected to get in,” she said of her admission to the University of Toronto’s Department of Social Justice at the Ontario Institute for Studies in Education. “I wanted to be taught and mentored by the top Black Canadian scholars.

“I knew I wanted to write more about my ancestors,” she said. “I’m very connected to them. I meditate, I pray for them. I visit my grandmothers in the graveyard. I am spiritually guided by them.”

And so Black graveyards became the large part of her studies and her dissertation. She spent the first year in Toronto, and then came back to her job in Fredericton and continued her research part-time.

What she realized early on in her educational career was the power of academic documentation.

“I found the tools. My ancestors’ story has been erased or not even included. So I used the academic process to write a document that would challenge and rupture the colonial narrative of my ancestors, the early Black settlers.”

DISCRIMINATION
While living in Toronto a decade ago, Mary was accused of shoplifting in a Shoppers Drug Mart. She reached into her backpack to retrieve her shopping list, and a clerk jumped to conclusions, rudely confronted her and made a scene.

“I did nothing wrong. I was shopping with brown skin,” she said.

She believed she was racially profiled and sued. She asked for $8,000 — the cost of a year’s tuition —and after four and a half years of travelling back and forth to Toronto to testify and attend hearings, she won her case.

The injustice of judgment based on colour was a stark reminder of her father’s story as a soldier in Halifax during the Second World War. He was ordered to get a haircut, but at the barbershop, was told, ‘we don’t accept your kind in here.’

When his officer heard his story, he went to the barber and told him, ‘you cut his hair or you won’t cut anyone’s hair in the military again.’

Those stories, and so many more, have propelled Mary forward to pursue truth and justice for both her ancestors and her contemporaries.

PHD AWARDED
Dec. 15, 2020 was a big day for Mary. It was the day of her oral presentation to her professors, effectively the defence of her dissertation, that would lead to her being awarded a doctorate and the title of “doctor.”

She entitled her dissertation, “Segregated in Life and Death: A Black Woman’s Critical Exploration and Narrative Account of Early African Descended Communities and Graveyards in New Brunswick.”

“I hope it will be informative and broaden the knowledge of early Black settlers in New Brunswick,” she said. “It’s meant to be a tool to tell a story not told before — a tool that allows for a more accurate reflection of Black settlers and how they overcame with pride and resilience.

“One of my examiners said I spoke with pride and praise and pain,” she said. “I really wanted to ask, ‘who gets to tell the stories of New Brunswick’s Black settlers?’ My answer is I get to tell it.

“I felt like I was abandoning my ancestors if I didn’t continue the stories. With absence comes erasure. I had a story to tell and I’ve told it with a tongue that’s respectful.”

RETIREMENT
Mary retired from the civil service in 2018, and just turned 65 over Christmas. Now that she’s a doctor, what’s next for her?

While there’s nothing specific just yet, “I have a lot more to do,” she said.

Right now, she is enjoying new married life. She met her husband in 2015. He is from Florida and they married in February of last year. Then the pandemic hit, and being together was almost impossible. They were finally reunited in November, and he, Mary and her son live in her house in Fredericton.

She’s taking some time to breathe a bit easier and get through the pandemic. After that, who knows, but it’s quite likely we haven’t heard the last of Dr. Mary Louise McCarthy-Brandt.

T A Williams 4 months ago

Congrats Dr. McCarthy-Brandt. Am praying to connect your expertise with Black, Anglican, and cemetery efforts in my community. Please reach out to tas2101@columbia.edu. Blessings.

I am so proud of you Dr. McCarthy-Brandt! My parents; Ralph & Fredericka Taylor (Henry), grandparents; Cecil & Charlotte Henry (Payne) & Thomas & Julia Taylor (O'ree), and great grandparents; William & Francis Leek buried at St. Peters' Cemetary. I have aunts, uncles, and cousins buried there as well! May you continue to make a difference by reflecting the injustices aimed at us as black people!
William Leek Taylor

Mary, I am so very happy for you and Thandiwe.

This is a great article about somebody whom I’m proud to call my friend. Beautifully written!