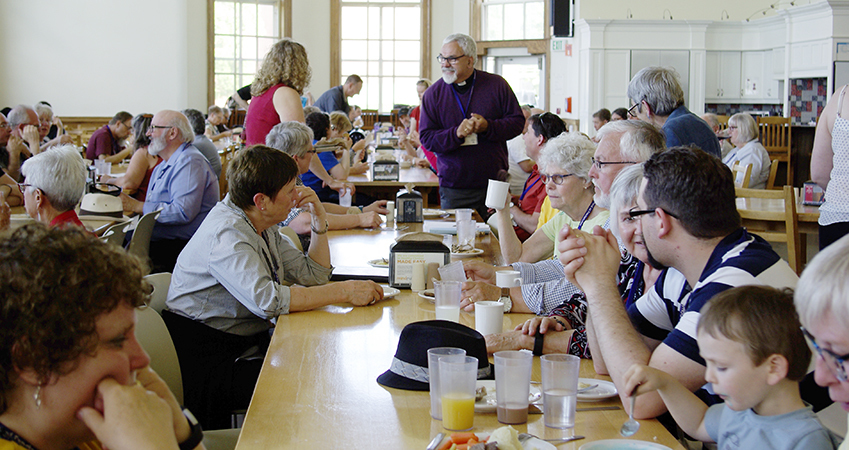 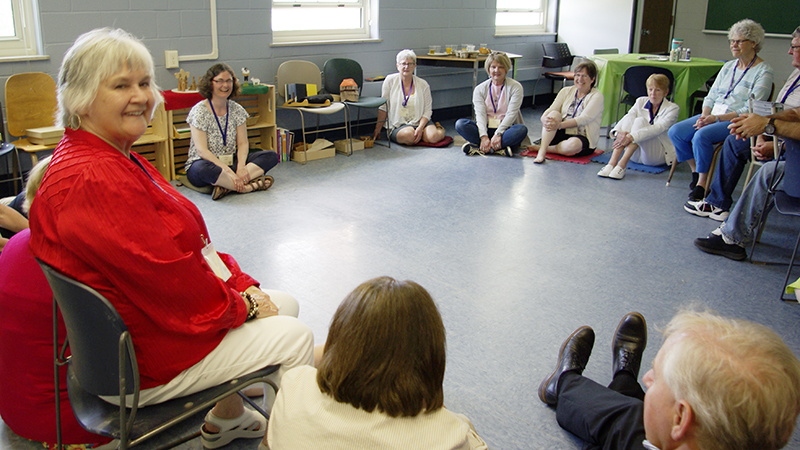 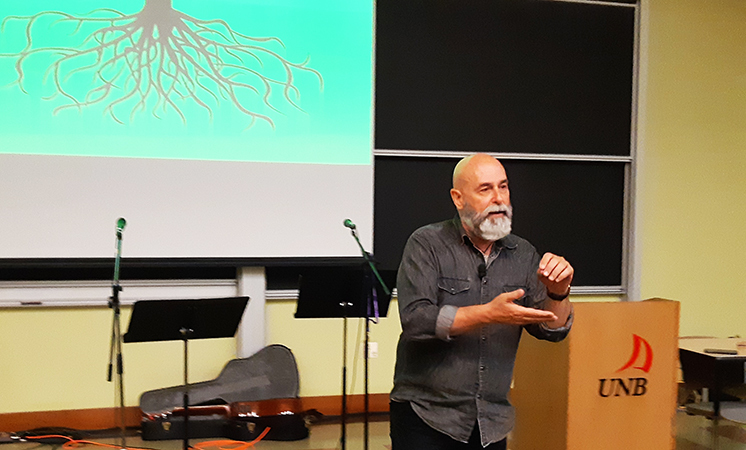 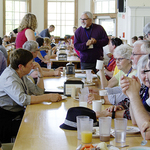 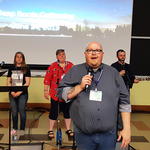 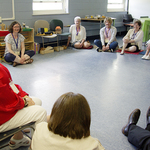 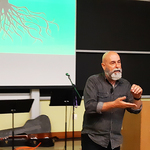 Editor’s note: The Deep Root diocesan gathering was a 24-hour event, with three keynote addresses, two messages from the bishop and two special guest speakers. In the interest of brevity, this article deals mainly with the first keynote address. More stories on the conference, including the other speakers and other keynotes, will appear later.

After 10 months of planning, the Deep Roots diocesan gathering was held June 14 and 15 at UNB with about 150 people attending. Special guest speakers were the Rev. Lisa Vaughn, parish vitality co-ordinator in the Diocese of NS & PEI; and the Rev. Renée Embree, director of youth and family ministries for the Canadian Baptists of Atlantic Canada.

The keynote speaker, who delivered three keynotes, was the much anticipated Rev. Dr. Michael Frost, the Australian author of “Surprise the World,” a book many Anglicans are familiar with after having studied his concept called BELLS last year. It was also introduced at Diocesan Synod 2017.

The conference began in the afternoon with ministry displays set up so delegates could browse and learn, and then they ate supper together.

The evening gathering began with worship, led by a band put together at TEC (Teens Encounter Christ). It included TC Ballard, Joni Richardson, Alyssa Melanson and LJ Smith. Bishop David Edwards opened with a message on how evangelism has changed since he was commissioned 30 years ago as an evangelist with Church Army.

“What I was able to do as an evangelist in the UK 30 years ago makes no sense today,” he said.
The door knocking and tracts are out, in favour of relationship building, though the theology is the same, he said.

Shawn Branch, parish development officer and prime organizer of the diocesan gathering, introduced Michael Frost, reminding everyone of our connection to his book on leading a missional life.

“It was great to see so many parishes take the challenge seriously to live this out,” said Shawn. “There was a beautiful synergy. People all over the diocese had lights going on in their heads: my faith is not limited to 10:30 on Sunday mornings!”

Wondering how to build on this momentum, he and a group sat around a table and came up with a concept that included inviting Michael Frost to come here. And so the planning began.

Michael began with an astounding story. The island of Australia is anxious about who comes to their shores, most especially Muslims, he said. There exists a dangerous and arduous Muslim “underground railroad” system that ferries refugees from Syria, Iraq, Afghanistan and other countries down through Asia to Singapore and other Southeast Asian islands, to finally land at Christmas Island, off the coast of Indonesia, but belonging to Australia.

The Australian government has responded by implementing a detention policy.

“I’m ashamed to tell you about it,” he said. “It’s the most un-Christian, despicable practice.”

If a refugee lands by sea on Australia territory, including Christmas Island, they go to mandatory offshore detention and will never settle in Australia. Instead, the country pays other small, poor nations and territories, including Papua New Guinea and Nauru, to take their refugees and detain them — indefinitely.

All the Australian government will offer them is a one-way ticket home, despite the United Nations declaring that 90 per cent of the people are true refugees in danger in their home countries. So these refugees have a choice: go home, or stay in limbo on these islands, never having a passport or citizenship, a job or a future.

“They are trapped in international limbo, and we are outraged. It’s unconscionable to us,” he said.

He called on his Member of Parliament, put up posters, took to social media, and attended protest marches — nothing worked.

The government barred the press from visiting the islands and made every worker there sign a non-disclosure agreement — promising never to speak of it.

However, medical documents were leaked to the press, and the news hit like a bomb.

“What we read was unconscionable,” he said. “It was an evil experiment.”

There were stories of countless women sexually assaulted by staff, multiple cases of PTSD, suicide attempts, and catatonic teenagers completely shut down. One particular case still resonates with him: an eight-year-old girl who compulsively swallows stones. Why? It’s the only way she had to end her life.

“It had a visceral impact on me,” he said.

He didn’t bother calling his MP again. Instead, he gathered the clergy in his town and went to the Prime Minister’s office to pray over the refugees mentioned in the Guardian newspaper stories.

At 10 o’clock in the morning, all in clerical dress, they walked in and fell to their knees to pray. The police were called, but refused to intervene.

“Wrenching, deep prayers, tears dropping down your nose, praying for people you’ve never met, praying together with all these clergy, some of whom were strangers to me, praying all day,” said Michael. “We prayed through all these newspaper reports. We were on our knees all day. We sang, we took communion, we cried out to Father in heaven: free these desperate people.”

At 5 p.m. they began singing Amazing Grace as the police returned. The doors burst open and 20 police officers in riot gear appeared. They were all arrested.

ALERTERS AND DEMONSTRATORS
“I shared the gospel so much that week. People were saying, ‘I saw you on the news’ and every time, I would announce that Jesus reigns. He is the king of the universe and I believe his reign is unfurling!”

Even when all the evidence is to the contrary, even when our churches are closing and our ministers are few, “we will say our God reigns in Christ.

“Sometimes it doesn’t look like it. Sometimes it looks like society is going to hell in a handbasket, but our God reigns!” he said.

He quoted David Bosch when he defined mission — as the task of alerting everyone, everywhere to the universal reign of God through Christ. But not just alerting. There is also demonstrating it.

Some people are alerters. They preach the gospel, pitch tents, knock on doors and hand out tracts, but it could be that it’s all speaking and no action.

Then there are the demonstrators. They do wonderful acts of kindness, but at some point they must explain why.

The alerters, like St. Paul, are bold, brilliant and unafraid. But most of us are in demonstrators, who do not need a pre-planned demonstration and a memorized message of scripture. They just do.

But when they’re asked why, it’s a chance to explain.

“For too long the church has been training parishes how to live fine, upstanding, vanilla lives,” said Michael, adding that what we need are intriguing, interesting, unusual, even questionable lives that people want to know about.

If someone asks what you did this weekend and you say, ‘I went to church,’ that’s not intriguing at all.

Michael told the audience that the prayer day at the prime minister’s office had made no difference, so they tried again, this time at his mansion.

They chained themselves by their necks to the gates of the house. The police came, this time not as friendly as before. They needed torches to cut the chains, which took quite a while. That gave the press and the neighbours time to gather, ask questions and talk.

One brought milk crates for them to sit on since the chains were heavy on their necks. Another brought out cushions for the milk crates. A young transgender man brought out a fruitcake he had made for a family gathering, instead offering it up to the pastors as sustenance.

“It felt like communion,” said Michael. “He broke off a piece and handed it to me. I could not say no to this cake.”

A Jewish woman told the group she wanted to stand with them. Much of her extended family had been murdered in the Holocaust and she felt the need to act. When the pastors cautioned that they were acting in the name of Jesus, she told them she could believe. And when the police began taking the pastors away, she told them, ‘I’m with them. You have to take me too.’

“Don’t tell me there aren’t people in your community who do not want to join you in this magnificent quest to alert others to the reign of God,” he said.

“Your task isn’t to recruit people to your church. It’s not to make more Anglicans. It’s to alert people to the beautiful world Jesus is in. Announce that! You’ll be amazed at how people join you!”

After both protests, the pastors were arrested, taken to the police station, processed and subsequently let go without charge. Michael said it was disappointing because they wanted the forum of open court to tell the story of why they were there.

The Deep Roots evening ended with worship led by the Rev. Paul Ranson, and a kitchen party.

See future eNews stories and/or articles in the NB Anglican for more on the Deep Roots diocesan gathering.

For press coverage of the leaked documents, click this link: https://www.theguardian.com/australia-news/2016/aug/10/the-nauru-files-2000-leaked-reports-reveal-scale-of-abuse-of-children-in-australian-offshore-detention

Michael Frost is an Australian missiologist, vice-principal of Morling College and the founding director of the Tinsley Institute, a mission study centre located at Morling College in Sydney, Australia. He has authored or edited 12 popular Christian books, the most notable to this diocese being “Surprise the World.” He is a teacher, international speaker and church planter, launching the missional community, Small Boat Big Sea, in Sydney in 2002.

Committees & Teams
Mission & Outreach
Comments for this post are now off.