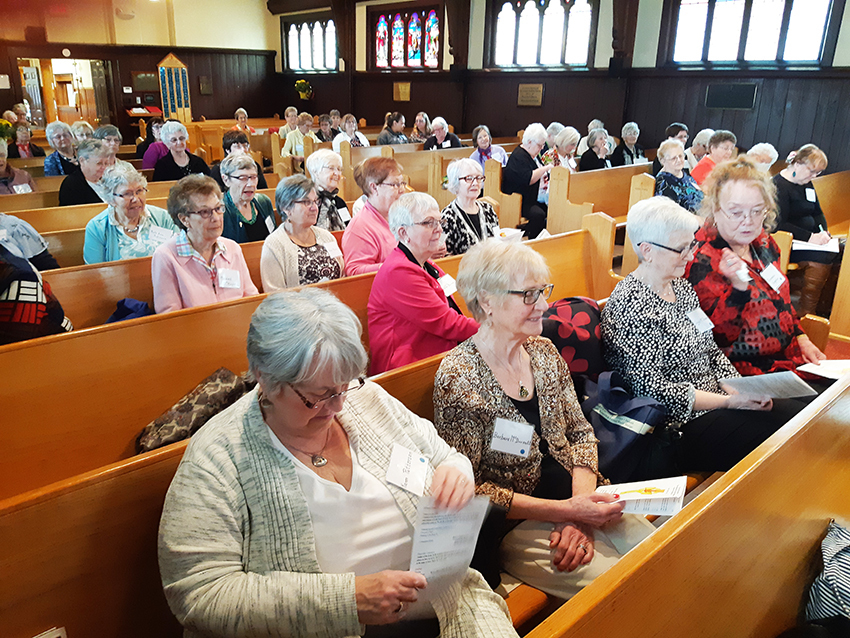 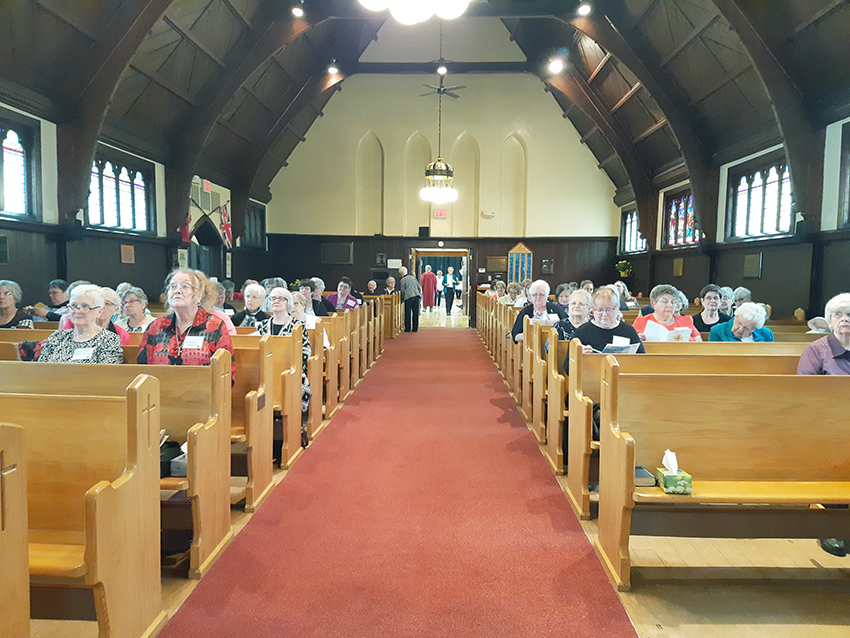 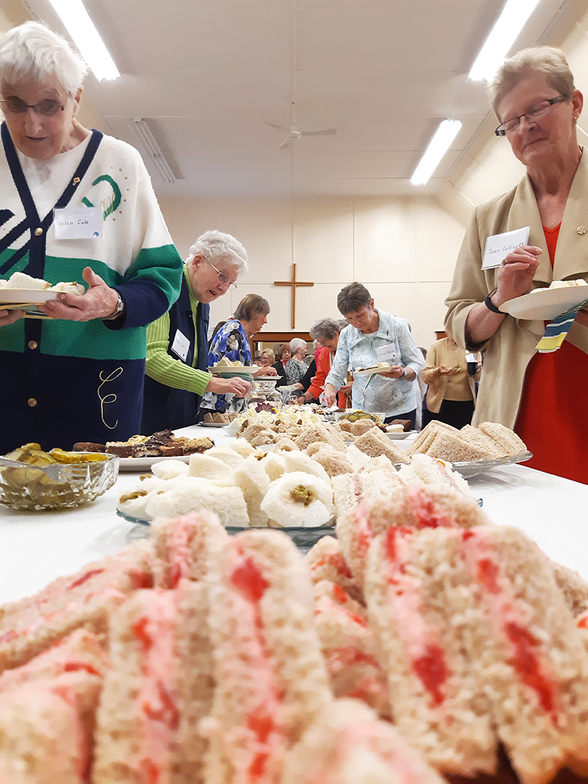 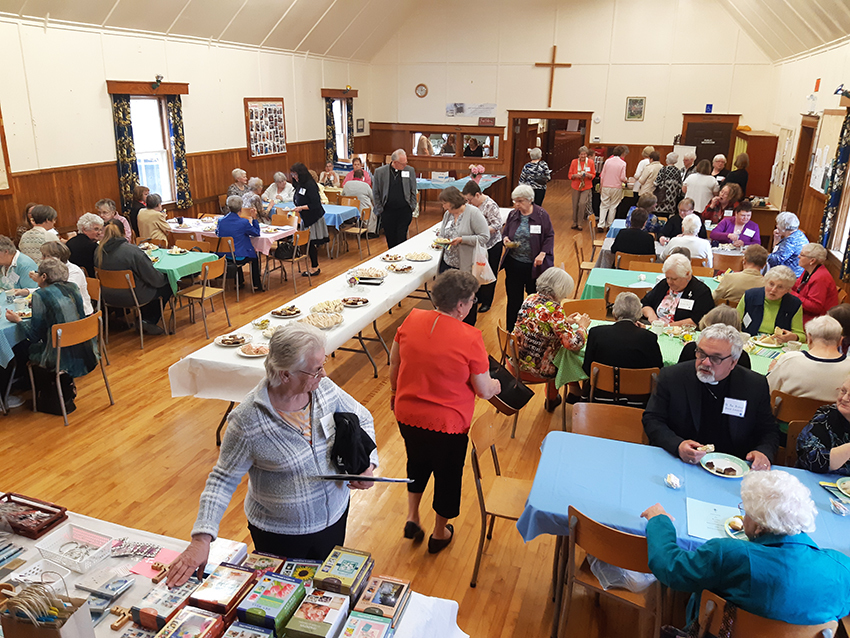 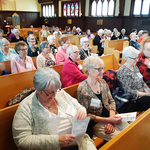 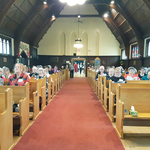 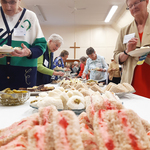 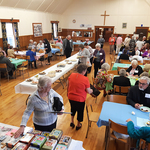 There were delays, technical kinks and, of course, a pandemic, but the diocesan ACW held an executive meeting via Zoom on May 6. Fifteen people attended.

“The passage speaks about abiding in Christ,” he said. “There are a lot of ramifications in that statement.”

When we abide in Christ, we begin to look like him, “but the church doesn’t always look a lot like Jesus — or God,” he said. “We say things and maybe do the opposite. People want us to say what we mean and mean what we say.”

Fortunately, he has seen blessing and beauty during the pandemic, with churches making an effort to help their communities.

Growth, specifically allowing the Holy Spirit to grow in us, can be lengthy and difficult. David noted he planted 40 varieties in his greenhouse, and to date, only three have shown any signs of life.

“We have to cultivate — in us and in the church — to allow growth, so that people can see our faith makes a difference.”

He noted that when we ask God to help us grow, for example, to be kinder to people, “the trouble is God’s going to put us in situations where we have the opportunity to grow our kindness!”

FARRALINE PLACE
In the context of the ACW’s longstanding financial contributions to the Farraline Place corporation, diocesan chancellor David Bell gave a brief history and overview of its legal status, as it relates to the ACW. Farraline Place is a large home for the elderly on Queen Street in Fredericton.

“The property has never been owned by the ACW,” he said.

The ACW elects and appoints members of the Farraline corporation, but belonging to the ACW does not seem to be a prerequisite, he said.

“They don’t have to be women, ACW members or Anglicans, but most do have to live in the Fredericton area,” he said, adding that none of the original documents mentions the words ACW, Anglican or Christian.

Recollections point to the late Bishop Nutter asking the ACW to look after the home, which seems to be the point at which a relationship began.

Farraline Place has faced a great deal of financial pressure in the past few years, and the pandemic has limited what it or ACW groups can do in the way of fundraising.

BISHOP MCALLISTER COLLEGE
Canon Paul Jeffries appeared via Zoom to give an update from the Ugandan school he heads.

The pandemic has largely spared the country, though precautions have led to an empty school which is slowly filling back up. By now, 60 per cent of the students will have returned.

“The government has staggered school entry,” he said. “But the plan is by the first of August, all students will be back in school.”

He expected his teachers would receive vaccines by the following week. He outlined the safety precautions being taken for students and staff.

“Most kids had never seen a mask before,” he said, adding unless a person knows someone who’s died of COVID-19, it’s difficult to convince them of the need for caution.

With the school ramping up, the cost of food and supplies has been great, and Paul thanked the ACW for their help.

He noted the library has been completely finished and the Music, Dance and Drama building construction is ongoing. A large hole in the ground was turned into an outdoor auditorium, where they held the Easter vigil this year.

TREASURER’S REPORT
Both revenue and expenditures were down due to the lack of activities and fundraising, said Cathy Lutes, diocesan ACW treasurer. With one exception (school fees for sponsored BMC students), none of the donations they usually make went ahead in 2020.

“With the 2020 budget prepped but not passed, we could not spend as normal,” said Cathy.

The 2021 budget, approved by the group, is larger than last year’s, with an increase in outgoing donations as a one-time-only event. ACW donation recipients for 2021 include the 10 transition houses in the province; Kara and Nelson Mejia in Honduras; Paul Jeffries stipend; Camp Brookwood; Camp Medley; Inner City Youth Ministry; Threshold Ministries; St. Luke’s Loaves & Fishes program; St. Mary’s Chatham; Diocesan Choir School; and the Council of the North. Those groups will share $8,000.

Cathy noted there is $19,000 in the Extra Cent A Day fund to help fund a portion of rectory repairs. David said, to his knowledge, there are at least 33 rectories in the diocese.

“I don’t know if churches know we have this fund,” said Cathy.

Branch donations are down, with 11 so far sending in funds. Most are not fundraising, and some can’t any way, despite the pandemic, given the age of their members, said Cathy.

Rosemarie Kingston, past president, noted there were almost 100 ACW branches when she began, but by the time her term was up three years ago, there were 67.

DEANERY REPORTS
Kingston-Kennebecasis  Branches have not been meeting in person but are staying in touch by phone, email and Zoom. Due to COVID, nearly all fundraising has been cancelled for the past year and two months, thus many branches struggled to keep up their Diocesan commitments.

Lancaster-Saint John  Before the pandemic shut everything down, some branches were able to do some fundraising and therefore meet their Diocesan and Deanery commitments. A Shrove Tuesday supper was held; items were given to the Seafarers Mission; and cookies were delivered at Christmas.
A number of charities were supported, including Farraline Place, PWRDF, Threshold Ministries and Royal Canadian Legion. All branches will be glad to get back to regular meetings and fundraising.

Miramichi-Chaleur  Branches were able to do some fundraising such as a turkey supper, take-out lunches and suppers and a memory Christmas tree. They supported a family at Christmas, a child in Uganda, Bishop McAllister College and collected mittens, socks scarves, and gloves for the Christmas hamper and area schools. All are looking forward to getting back to normal.

Shediac  While it has been a challenging year and many branches are getting smaller, they are still managing to meet their commitments, or at least a portion of them.

Although branches could not hold meetings, they found different ways to raise money, including take-out suppers, online auctions and bake-less sales.

They were able to support PWRDF, Bishop McAllister College, St. Michael’s Youth Conference, Camp Medley, Seafarer’s Mission and many more. The branches are all praying with God’s blessing, things will return to some degree of normalcy in 2021.

Thank you, birthday, get well and sympathy cards were sent and Valentine cookies were delivered.
A World Day of Prayer Service was hosted and a St. Patrick’s tea was held. Altar flowers were placed at Christmas and Easter in memory of departed ACW members.

PRESIDENT’S REPORT
ACW diocesan president Linda Fury had a brief report, saying she’s had lots of phone calls and emails with questions from members. She noted the many departed members in the Book of Remembrance.

It is very unlikely that either the annual Quiet Day or deanery meetings will be held this fall, she said. With a lack of information and the province still in the Yellow phase of the pandemic, it’s difficult to plan for an event that might not actually take place.

The next Quiet Day will be held in the Lancaster Deanery. The next annual general meeting of the ACW is scheduled for spring 2022 in the Archdeaconry of Kingston and the Kennebecasis.

MOTHERS’ UNION REPORT
Diane Ratford gave the Mothers’ Union report, noting donations are down and some staff in the UK have been furloughed. Much of what is happening with the worldwide group is via online communications. On the positive side, travel costs have been cut.

The 2020 Canadian conference, set for the University of New Brunswick, had to be cancelled, but will go ahead online in June. Much of what the international, national, diocesan and chapter groups do will depend on COVID-19, she said.

To conclude the meeting, Abp. David thanked everyone for their efforts, particularly during such a trying time.

“Thank you for all you do to keep the ACW flag flying. I hope we can all get back together soon,” he said, adding he hears the concerns of the group quite frequently from his mother-in-law, an ACW member.
With files from Diane Todd.

PHOTOS:   All photos show activies from the annual general meeting held in Bathurst in 2019. It was the last time the entire group was together.
McKnight photos