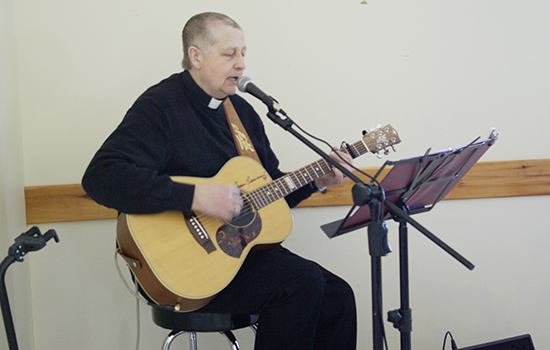 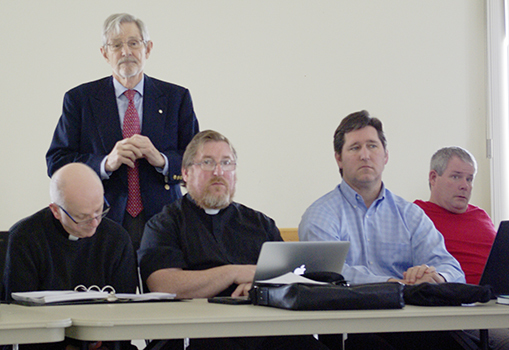 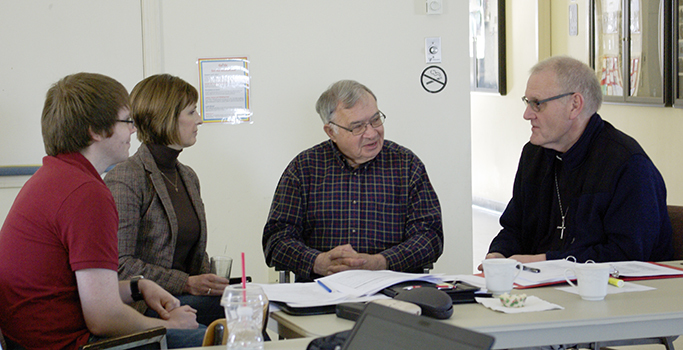 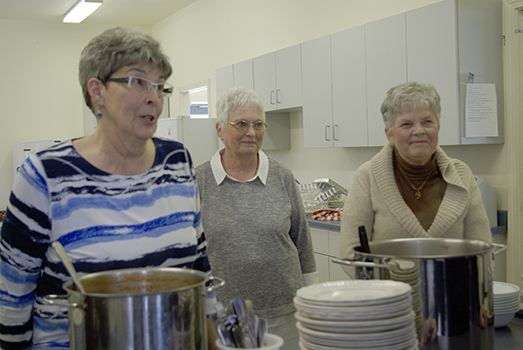 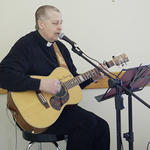 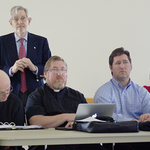 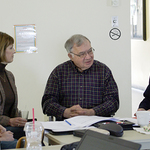 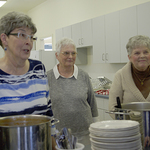 Diocesan Council met Feb. 23 at in the Parish of St. Peter, Fredericton.

Bishop David Edwards began with a thank you for the kindness and compassion he’s felt since the death of Janet in November. He also asked for prayers for his mother, who is now in a nursing home, and his father, who is finding it hard to cope with this new situation.

The bishop’s homily was based on Luke 6:27-38. He noted a book called How God Became King: The Forgotten Story of the Gospels, by N.T. Wright, and the author’s suggestion that we need to see the gospel in the gospels.

“Where Wright is pushing is … that too easily the church has concerned itself with the epistles of Paul without looking at the gospels,” he said.

“Lots of theology comes out of the epistles, but we’ve missed lots of stuff in the gospels while emphasizing teachings on the church. So we need to see the gospel in the gospels. I think we need to ponder both the actions and words of Jesus.”

Citing verse 36, “Be merciful, just as your Father is merciful,” the bishop noted that “Showing mercy flies in the face of so much we see around us. Take the European Union. The countries are desperate to stop immigrants coming in, but that isn’t showing mercy.

“For us as a diocese, how do we show love to our enemies? he asked. “Let’s ponder the actions of Jesus this Lent and try to discern the gospel in the gospels.”

Faith Formation
Parish development officer Shawn Branch led a presentation that focused on leaders. Small groups of council members discussed leaders they looked up to and the characteristics they found in those people and shared them: humility, integrity, mentoring attitude, enthusiasm, diplomacy, visioning, and so on.

Shawn told the group that in his travels around the diocese, one thing has become clear: there are people the parish leaders need to start investing in, though the response is sometimes, ‘I don’t know if I have the time or I’m the right person to do that.’

“Are we raising them up to assume leadership roles?” he asked. “How many of us are praying for God to raise up leaders in our church and our diocese on a regular basis? We need to be people of prayer, praying for those we oversee."

Shawn asked that council members, as leaders in the diocese, be prayerful in this endeavour, asking God to put this on their hearts.

The Rev. John Galbraith, new half-time director of Camp Medley, spoke to Diocesan Council about the camp’s budget and policies, in particular, rentals of the facility. He encouraged members to contact him with any questions or concerns.

Canons & Constitutions Committee
Chancellor David Bell introduced a motion to amend Canon Six on parish governance, widening the parameters of who can sit on a parish advisory committee. This motion passed and will be recommended to November’s Diocesan Synod for approval. David noted the impetus for the change originated with Bishop’s Counsel.

David also introduced a motion to amend the Diocesan Misconduct Policy with several small changes. These amendments originated with the Human Resources Committee. All but one of the changes was accepted. David noted the entire policy will undergo a review shortly.

Trinity Tower Restoration Project
The Rev. Steven Scribner and parishioners Jacqueline and Derek Oland appeared before council with a presentation on the state of Trinity Church in Saint John and the need for restoration of the steeple tower. They requested about $75,000 from the diocese for phase I of the three-phase project, after having raised $410,000 of $485,000.

After the presentation, council voted to discuss the request in-camera. In the end, it voted to give $35,000 for the project.

Gilbert Carter, speaking as chair of the Finance Committee, noted that diocesan investments sustained a loss of nearly three per cent as of Dec. 31. Heather noted a concerted effort in the diocese to reduce proposed spending, resulting in about $90,000 in savings this year. On a positive note, Heather told council that markets have begun to rebound.

The Finance Committee received and considered requests from five parishes for a reduction in shared mission assessment. The treasurer has communicated the approved reduction to each of the five parishes concerned.

Other
Council approved the appointment of Debra Best and Alyssa Vandervalk to the Communications Committee.

Council approved the appointment of Chancellor David Bell as one of two diocesan representatives on the Atlantic School of Theology Board of Governors for the term July 1, 2019 to June 30, 2021.

Council approved a motion that the Finance Committee explore and advise council on a format by which parishes assess anticipated financial requests for infrastructure needs so that applications of a similar nature be compared before decisions are made about which ones can be supported in any fiscal year.

The next Diocesan Council meeting will be Saturday, June 1, in the Parish of Kingston.

With files from the Rev. David Peer.

2. Derek Oland addresses council, with the Ven. Rod Black, the Rev. Chris Hayes, the Ven. Brent Ham and the Rev. John Galbraith in the foreground.

Fredericton
St. Peter
Comments for this post are now off.