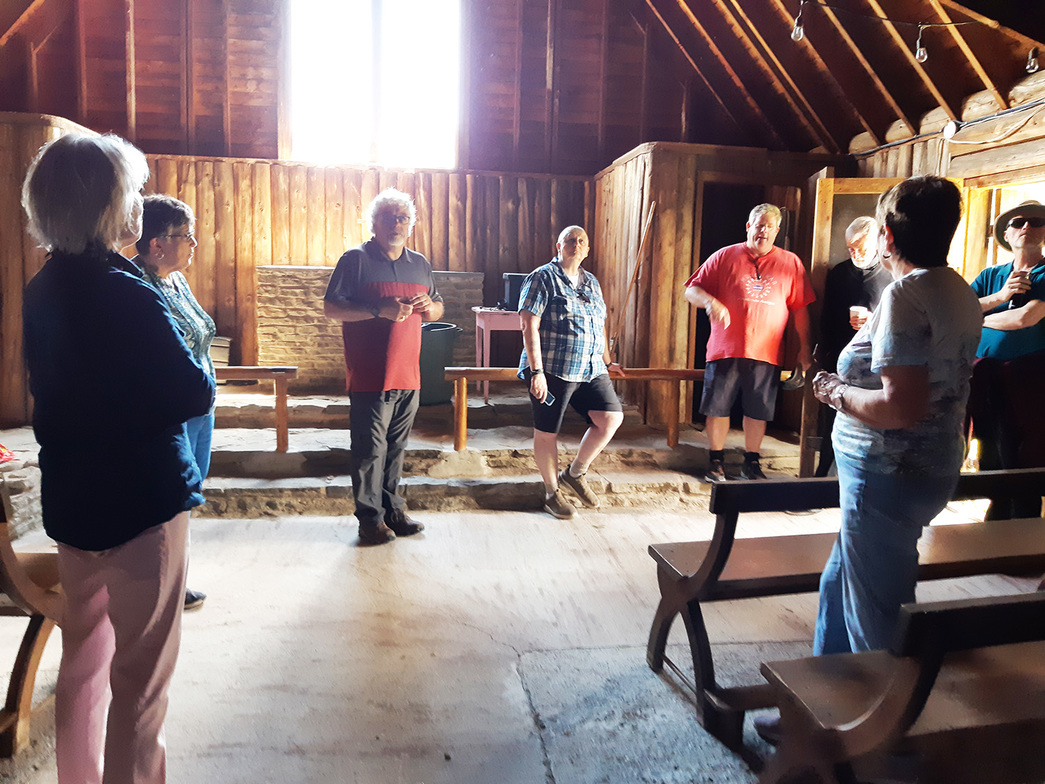 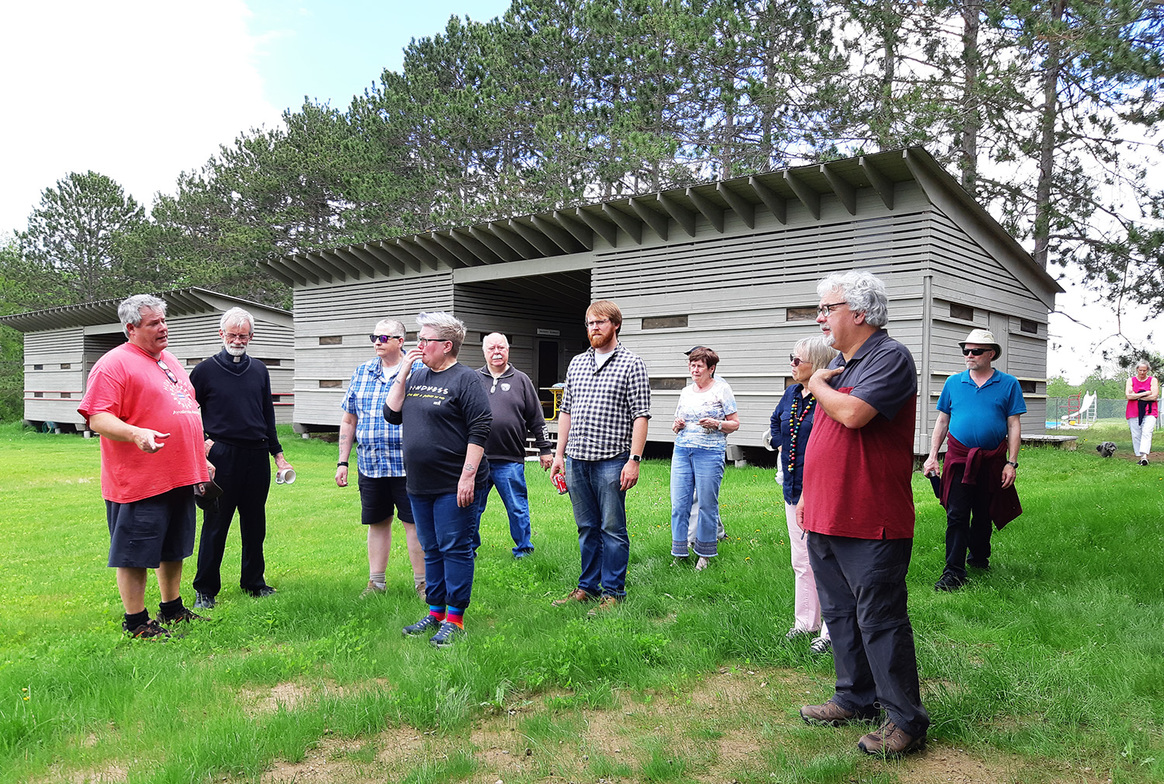 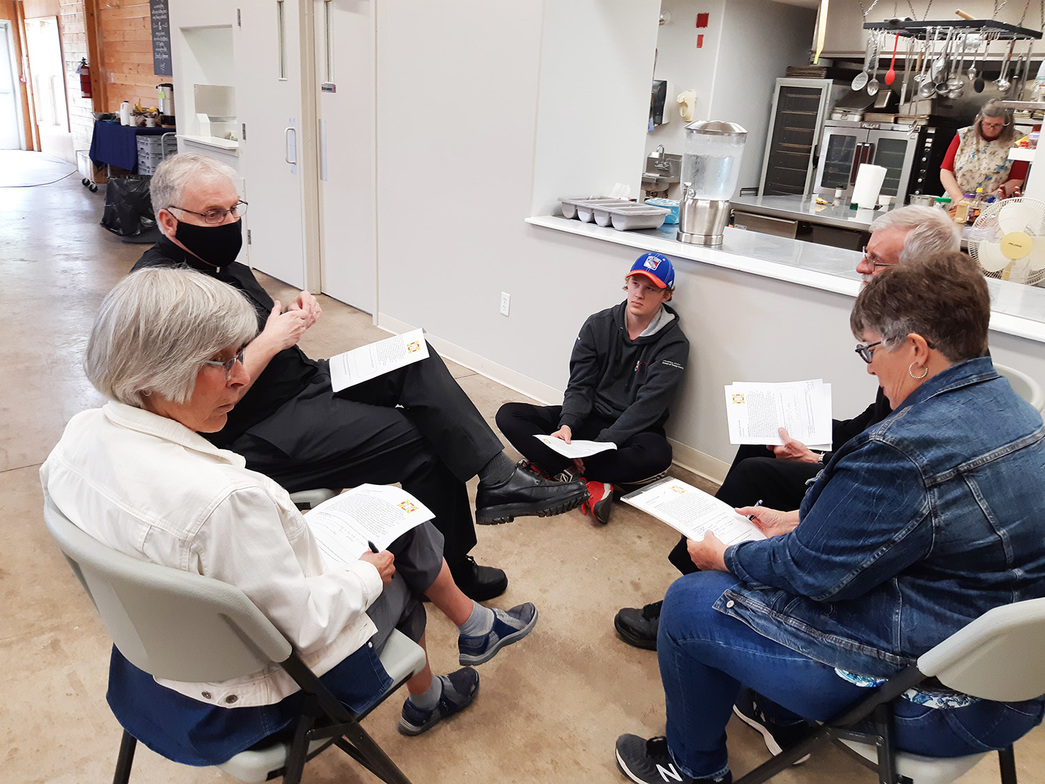 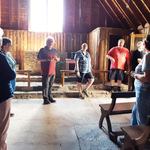 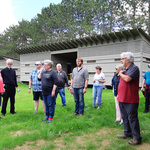 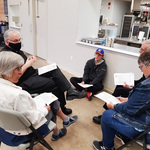 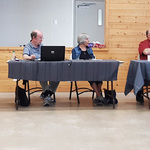 For the first time in more than two years, Diocesan Council met in person on May 28. The location was Camp Medley in Upper Gagetown.

The day began with Morning Prayer and a short homily by Archbishop David Edwards, who spoke of Joshua. The one chosen to lead after Moses initially stood in the way.

“It’s easy to stand in the way of the Holy Spirit,” said David. “But the situation can always be redeemed.”

It’s important that we not stand in the way of what’s to come, he said, noting there are many questions about the future right now.

“We do know that the church, the diocese, will go through changes, and that requires deliberate discernment. So often we say to God, ‘I have a great idea. Could you put your rubber stamp on it?’

God will sustain his church and use all that’s happened to move it in the direction he wants, said David.

“I believe with all my heart he is saying we must take time to discern.”

SAY YES! TO KIDS
The Ven. Cathy Laskey gave a report on the Anglican Foundation’s Say Yes! To Kids campaign in the Parish of Salisbury and Havelock.

Their aim is to re-energize their youth ministry in the community, with an original fundraising goal of $2,500. They increased their goal to $4,000, and as of May 28, had reached $3,500. The fundraising continues to the end of June.

Parish rector the Rev. Chris Hayes was absent from Diocesan Council due to a timing conflict. He was running the parish’s first ever bike rodeo.

This project is one of 20 in Canada and the only one in the diocese. If you wish to support the campaign, contact Chris:  revchrishayes@gmail.com  or visit https://www.anglicanfoundation.org/sayyestokids/

MOTIONS
Diocesan Council approved a recommendation to Diocesan Synod that Canon Four, Diocesan Governance be amended as follows: 18 (3) The Lay members of the Finance Committee shall be persons who are voting members of a parish, mission or the Cathedral of Christ Church.

Two motions before council, both of which were approved, were prompted by recent increases in the price of fuel, food, and other essentials.

The first was an increase in gas reimbursement. The Human Resources Committee recommended an increase from 25 to 30 cents a kilometre for those with car allowances, and from 44 to 50 cents for those without. The increase takes effect July 1, and will be reviewed in three months.

The second change was a two per cent stipend and lay salary increase to take effect July 1 for the remainder of the year. Diocesan Council Executive met following the meeting to clarify the details of this increase.

Diocesan Council agreed to cover the two per cent increase in minimum stipend or any similar increases agreed by parish corporations. The stipend and salary increases for parishes could cost up to $20,965 but will be covered by Synod since parishes did not budget for them.

LUNCH
At lunch time, Camp Medley director John Galbraith led a tour of the facility, highlighting the many upgrades that have taken place throughout the pandemic. Some members had not been to the camp in 60 years. Camp Medley uses about six acres of its total of 55 acres.

TREASURER’S REPORT
Heather Harris-Jones spoke briefly about the new IPS necessitated by the redemption of investment in Qwest and transfer of funds from Mandeville to RBC, bringing all investment assets under one group of advisors.

Heather noted that the decision to align with the CRA definition of investment return as realized return has been very helpful for the Synod during the volatile period in the markets this year. The year to date realized return is currently 2.4 per cent.

Heather presented the Review Engagement Report with the 2021 Financial Statements. Bringloe Feeney concluded that nothing came to their attention during their review; the financial statements present fairly, in all material respects, the financial position of the Synod as of December 31, 2021.

Bringloe Feeney also noted that the results of Synod operations and cash flows are in accordance with Canadian accounting standards for not-for-profit organizations.

Only a few line items saw a more material change from 2020 to 2021 due to the higher rate of return. The results should be more consistent, year over year, going forward due to the change to recognize only realized income for the calculation of the rate of return.

All the grant money for this financial year has now been awarded.

“This has been a God-directed project from day one,” he told council. “I was the biggest naysayer. Now we have an almost completed project.”

One basic need denied most people in rural Ghana is health care, which the mobile medical clinic will help address. The Diocese, individual donors, parishes, ACWs and Rotary came together to fundraise for this $278,000 project. It is one of the top five Rotary Foundation projects for the year, said Robbie.

Now that the customized, equipped van has arrived in Ghana, where it remains in Customs, the Ho Teaching Hospital will take possession. A public health nurse will accompany doctors and nurses to vaccinate patients.

Robbie described the van as “the heart of a hospital on wheels.” He and a Rotary member will visit Ho later this year and develop a final report for Rotary.

Robbie took questions from council members. After his presentation, the Archbishop presented Robbie with a diocesan Award of Merit for his leadership on the Ho project.

OTHER
Council accepted the resignation of youth member Eric Beek.

Bishop David awarded council member Robert Taylor a certificate of merit for his many years as treasurer of Diocesan Choir School.

The next council meeting is set for Sept. 29 and will be held online.