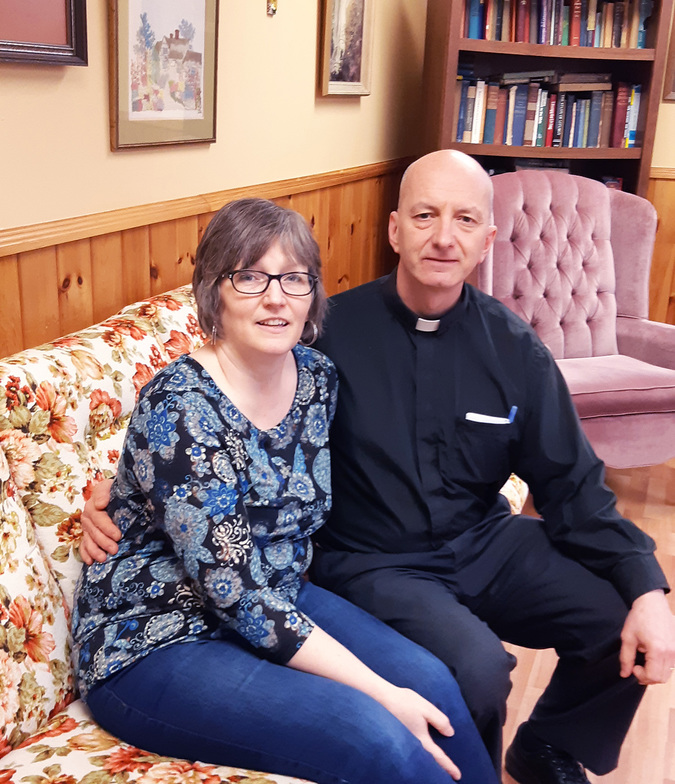 If he had his way, the Rev. Canon Chris VanBuskirk would rather you not be reading a story about him receiving the City of Moncton’s highest honour — the Order of Moncton.

“I’m really embarrassed by it,” he said when reached for comment. “There are so many other people doing good things. It’s humbling and embarrassing and I don’t want to talk about it, really.”

Anyone can nominate a citizen, and Chris, rector of the Parish of Moncton, is at a loss as to who was behind it.

“I don’t know how it came about,” he said. “But I think if it in some way glorifies God and is helpful to people in need, draws attention to them, then OK.”

Chris is quick to note he is simply the leader of a large group of people he calls giants.

“I call our volunteers giants,” he said. “They’re always there. I work with great people, thanks be to God. They come in every morning. It’s pretty incredible what they do.

“I’m just the point person. I have a great congregation and a great team.”

The downtown church is known for its daily breakfasts, laundry and shower ministry, and for opening its doors as a temporary emergency shelter last winter.

This award is in stark contrast to public comments made about St. George’s Anglican Church a couple of years ago when Chris and Norm allowed 20 homeless people to camp in the church yard.

That act of generosity led to a scathing story in the Times –Transcript newspaper where a local entrepreneur called for $1,000 fines for churches and other social agencies that allow the homeless to camp downtown. This person called St. George’s “a nuisance” for allowing the tents to be pitched in the church yard.

Chris will receive the Order of Moncton at a ceremony later in October.

Chris’s bio, from the City of Moncton website
In the words of the late Tommy Douglas: “The only test of our character that matters, is how we look after the least fortunate among us.”

Clearly, the Rev. Canon Chris VanBuskirk is a man of true character. In his role as the leader of Saint George’s Anglican Church in Moncton he has led an almost overwhelming array of initiatives aimed at those Monctonians that need it most.

Affectionately known as Father Chris by his parishioners, he began the practice of serving Sunday dinners to those in need more than two decades ago. In the spring of 2021, he began a six day per week breakfast program; the church now serves more than 1,000 meals per month and offers shower and laundry services to those who need them. In addition to this he has provided counsel, fresh clothing and financial assistance as needed.

In the winter of 2022, an Emergency Warming Centre for more than 50 individuals was established at the church when capacity at other shelters was reached. Father Chris led a group of volunteers along with the team from ReConnect to provide a 7-day-a-week space until alternate services could be provided.

In his role at Saint George’s, he has facilitated gatherings of dozens of church representatives from across the City, meeting monthly with local non-profit organizations to ensure all are up to date and educated on the latest issues and concerns affecting the community’s most vulnerable people.

Father Chris provides training at Tantramar Seniors’ College on the subject of social and human rights with a goal to improve understanding of systems in place in communities on these matters. He also spends many hours each week in support of seniors through visitation at community nursing homes and seniors’ residences as well as assisting patients and their families at the Moncton and Georges Dumont Hospitals.

In addition to all of these initiatives, Father VanBuskirk has the rank of major, serving as a military chaplain overseeing all of New Brunswick and Newfoundland & Labrador’s Primary Reserves. In 2018, he spent six months deployed to Kuwait and Iraq.

Mike Briggs about 2 months ago

Chris is far too modest. He thoroughly deserves this honour. If not for him some of the initiatives would not have got off the ground. Yes you absolutely need volunteers but you need a leader who can co-ordinate things and he is that leader. I am fortunate to assist him with a couple of services at seniors residences.
Congratulations Chris

Cynthia Derksen about 2 months ago

Wonderful story- the hands & feet of Christ in action!

Garda DeWare about 2 months ago

I completely agree with Mike Briggs when he says that Father Chris is far too modest. He is very deserving of this honor. His congregation will readily tell you what a special priest he is. The children also tell you how special he is by running up the aisle to hear his Children's Talk.
Congratulations, Father Chris!!

Phyllis Cathcart about 2 months ago

Jim Morell about 2 months ago

Father Chris' example of leadership is based on the teaching of Jesus - help the poor suffering and do so with a servant attitude. What a great example he and his congregation are for our whole diocese. The city's honour is a well deserved recognition, but perhaps its most important benefit will be that it will touch the hearts and minds of others, and motivate similar responses to a growing province-wide crisis.

John Sharpe about 2 months ago

Well deserved Chris. to receive this award from the City of Moncton. You are truly a faithful Pastor, Soldier, and Servant doing the Lord's work, as you promised at your ordination. Yes, I preached at your ordination as I recall at St. James Church, Saint John, NB. God bless you, Carolyn, and all your volunteers. To God be the Glory.

Christine Bartlett about 2 months ago

Father Chris you are so deserving of this award. As Mike said you are so modest, but I know you will accept this award with Grace and Reverence. I’ve had the honor to serve with you and I miss those Tuesday mornings so much. God Bless you and all of the groups that work with you.

Charlene Routledge about 2 months ago

Jill Craig about 2 months ago

Father Chris is one of the greatest examples of a person reflects the love of God. His humility is one of his endearing attributes. When we had the privilege of being members of one of his first parishes, he taught us so much about the Anglican faith and about Christianity in action. His compassion for the marginalized was something that he actively displayed then as well. May God richly bless you and Carolyn.

Jeff Payne about 1 month ago

Phyllis lamont about 1 month ago

25 years ago I was involved in a mva and badly broken body. I’m not a devoted Anglican. My church was Wesleyan. Chris came to visit me in Fredericton several times. When I was transferred to bath hospital, it was easier for him to visit. I remember I had to go back to Fredericton for more surgery and he said he would come ,before I leave by ambulance , to have prayer with me. Well, it was a little past 10 pm and in walked Chris. What joy it was when I saw him. We had a good visit. After I got home 6 months later, he asked if I would come to his church to share about my accident, health but most of all what God’s power and love had to do with my physical and spiritual healing.
Chris is truly a man of God’s blessings and he has a glow about him that lights up wherever he is. Congratulations Chris on receiving this honor. God’s blessings to you.

Suzanne MacLean about 1 month ago

Chris you were an inspiration as a young Priest at Church of Good Shepard .Florenceville. You were so good to my parents Don and Helen Somerville. So many acts of kindness to them and my brother Donnie. Big congratulations Chris and Carolyn.

B Colford about 1 month ago

This is a great person and priest. A man of honer and integrity that I would work with anyday and did so on the community dinner initiative. It was a a great experience.
Love the man/priest.

Lisa Ryan about 1 month ago

Father Chris has had a profound impact on my faith and my work. He demonstrates daily what it means to “love your neighbour as yourself”, not only to the forgotten, marginalized and poor but also to those that perpetuate injustice, knowing that only love with break the chains of selfishness, greed, and hate. Father Chris has impacted hundreds of people, and it is impossible to know just how far his love and kindness has spread throughout the world. I thank God every day for giving us leaders just like him, who reflect the heart of God in how they live.
I don’t know if Father Chris will see this, but I just want to thank him for his faithfulness.

Dianne Dallaire about 1 month ago

Father Chris we at St. George’s were so blessed 18 years ago when God guided you to us, knowing that we would need a special someone of strong faith, kindness, humbleness and selflessness. You continue to lead by example and for this we are truly thankful God Bless