Fredericton community kitchens — at the heart of hunger 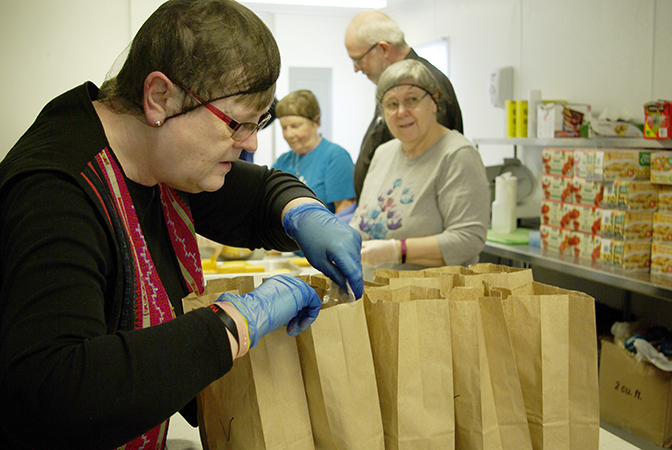 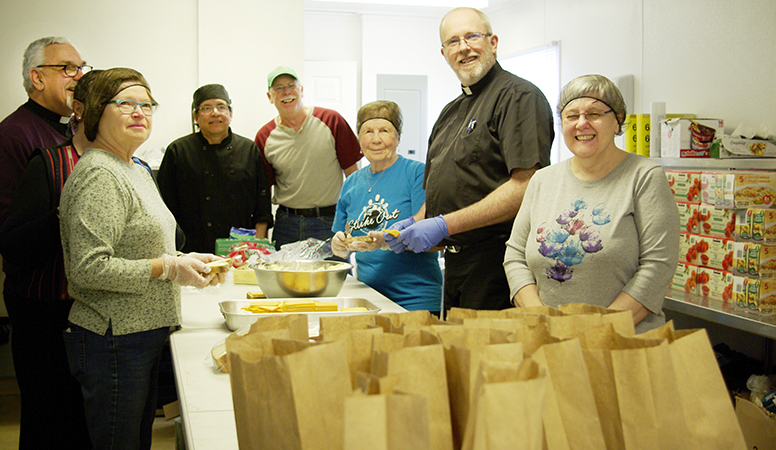 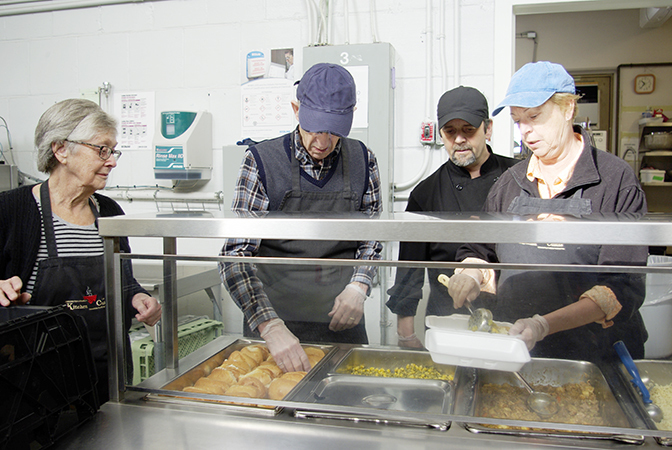 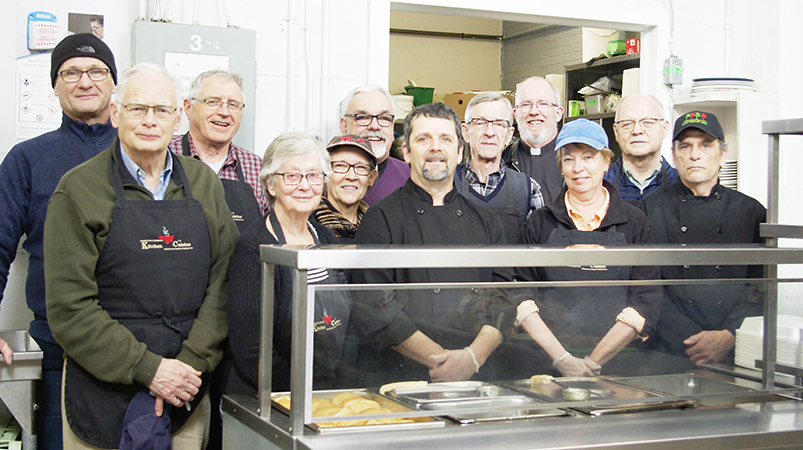 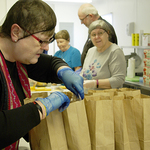 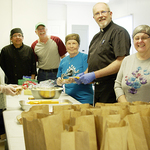 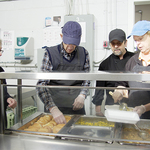 Perhaps the best description of the Fredericton Community Kitchens is small but mighty. The kitchen is no bigger than the one in your average house. There are three trained chefs who make whatever the donated ingredients allow. And the dining room is deceptively small. The office area is even smaller, with two desks in the hallway.

But this is the place where skill, innovation and compassion meet up to feed hundreds of people every day of the year. The breakfast crowd numbers about 30; lunch and supper see 80-100 people a day. The shelter next door ensures there will always be people here at mealtime, even in a storm.

On March 11, Bishop David Edwards toured the facility and the off-site trailer at Leo Hayes High School where the Student Hunger Program is run. The tours were arranged by the Rev. Kevin McAllister to highlight the need in the run-up to the annual bowling tournament he has organized for the past three years. (See the April 9 eNews for a story about the bowling tournament results.)

For the past two years, including 2019, the funds raised have been earmarked for childhood hunger programs. In Fredericton, the money raised has gone to the FtonCK’s Student Hunger Program. In other locations, parishes were encouraged to donate their fundraising to breakfast, lunch or backpack programs for children.

The FtonCK, running since 1982, operates with seven full-time and one part-time person — including three chefs, three administrators and a driver. The Student Hunger Program employs one person. The kitchen could never function without a fleet of volunteers. There are 800 on the books and about 200 active volunteers, many from area churches, who keep the two programs going. Managing the volunteers is time consuming, and has led to the hiring of a full-time person just to co-ordinate them.

Back in the kitchen, Dale Larsen describes his seven years at FtonCK.

The week prior to the visit, the kitchen received 800 pounds of protein donated from area businesses. Protein — mainly meat — is the most expensive food to purchase, so it was doubly appreciated.

To illustrate his point, Dale pulled a large baking sheet from the oven. On it were dozens of pieces of golden brown chicken. The smell was enticing. Lunch was going to be delicious.

“Chicken with corn flake coating. Doesn’t that look good?” he asked. “It’s a favourite here. So is lasagna.”

Chef and kitchen manager Louis Cosman will mark two years here this summer, and he couldn’t be happier.

“I chased corporate dollars for 34 years, I’ve cooked for kings and queens, but there’s no more of that,” he said.

He always wanted to work here, but the timing was never right. When a position was open, he was fully employed. When a restaurant closed and he was out of work, they’d just hired someone.

“The only mandate we have here is, ‘did I do the best I could yesterday, and how will I be able to change someone’s life today?’ It’s instant gratification,” he said.

“We do excellent, five-star quality food off this line when the ingredients are there.”

To confirm for Louis that’s he’s where he should be, he spoke of a recent incident where his beloved cat had to be put down. It was a heartbreaking time which he shared with his co-workers. Within a day the news had filtered down to the guests, who responded with love and compassion.

“A day later, I get a sympathy card, signed by all the people [at the shelter],” he said. “The people next door have more to think about than my cat and me, but they took the time. They gave a lot to me that day.

“This is what I was meant to do. I was ordained to do this,” he said.

By mid-morning, the dining room was busy with volunteers, mostly from Brunswick Street Baptist Church, readying 50 take-out meals for the John Howard Society. That’s a weekday program, prepared and delivered by FtonCK, and distributed by the society to its own clients. On the day of the bishop’s visit, the menu was beef stew over rice, with a roll and mixed vegetables.

Joanne Braman is one of the volunteers. She lives nearby and comes on Mondays at 7 a.m. to make toast and coffee, serve breakfast, clean up and start preparing for lunch, which often includes vegetable peeling and helping with the John Howard meals.

“I love it here,” she said. “I love serving the folks. It’s not just meals they serve here, it’s meals with flair!”

Hamburgers with grilled pineapple slices, mashed potatoes piped in artistic designs have impressed her and others.

All this effort, including the Student Hunger Program and the John Howard Society program, resulted in 156,000 meals served last year by FtonCK.

So who pays for all that?

“It’s all corporate and private donations, and some grants,” said interim operations manager Mike Smith. “As far as the food goes, it’s all donated. Businesses donate their time too. Employees come in to volunteer.”

Student Hunger Program
A blue trailer valued at $100,000 has been sitting outside Leo Hayes High School for about 18 months now. It’s the headquarters for the Student Hunger Program, which began in 2014. Donated by Earl and Sandy Brewer, the trailer’s main feature is a large walk-in cooler.

A few years ago, the Brewers’ daughter was part of a group at LHHS that began making lunches for their fellow students who didn’t have any. Mom Sandy identified the need, which led to the donation of the trailer.

The Student Hunger Program is staffed by Carlos Lamadrid, who relies on volunteers five days a week to prepare healthy lunches for about 350 students a day. On the day Bishop David visited, the crew from All Saints, Parish of Marysville, was making ham sandwiches on the assembly line.

Teacher Mike Smith saw the real need for student lunches before retiring two and a half years ago. So he joined the FtonCK board and took the lead on the Student Hunger Program. That led to his temporary job running the whole organization from February until the end of the school year while FtonCK reorganizes.

“From here the food is under strictly controlled conditions,” he said of the assembly line. “It goes into picnic coolers and then into the walk-in cooler where it stays until tomorrow. Then our driver, Jerry Woodcock, delivers it to 14 local schools. That’s 350 lunches.”

But that’s not all that goes on in the fight against childhood hunger. Another program sees volunteers packing backpacks full of non-perishable food — enough to make two meals for a family of four on the weekend.

Those backpacks go out on Fridays, and Jerry picks them up the next week, where they come back to be repacked and send out again — for 40 weeks, the academic year.

Mike saw the effects of this program in the classroom, recalling a boy putting on that heavy backpack on Friday with a look on his face Mike has never forgotten.

“He was providing for his family,” he said. “That boy was so proud.”

Besides the backpacks and the 350 daily lunches, FtonCK also provides and delivers to four other smaller programs:

The Enterprise program at Fredericton High School distributes snacks and filled backpacks to youth at risk. FtonCK sends bulk food to Minto High School every two weeks for their own backpack program. They do the same thing once a month for Lincoln Elementary School. And they provide food to the Culinary Arts program at LHHS, where students prepare the donated vegetables and cheese to give out to students in need at lunch time.

None of this could ever hope to be successful without the huge support of the people, organizations and businesses of the community, said Mike.

“That proves to me that if there’s a good cause, people will do what they have to to get it done,” he said. “The Student Hunger Program is a shining example of this. The whole community is doing something about it.”

Staff and volunteers of the Fredericton Community Kitchens formed a team and bowled in Fredericton on April 6.

4. The volunteers, visitors and some of the staff at the Fredericton Community Kitchens. They include Mike Smith (back row left, wearing cap), Bishop David Edwards (back row, middle), and the Rev. Kevin McAllister (back row, right). Chefs Dale Larsen and Louis Cosman are in the front row, third from right and extreme right.