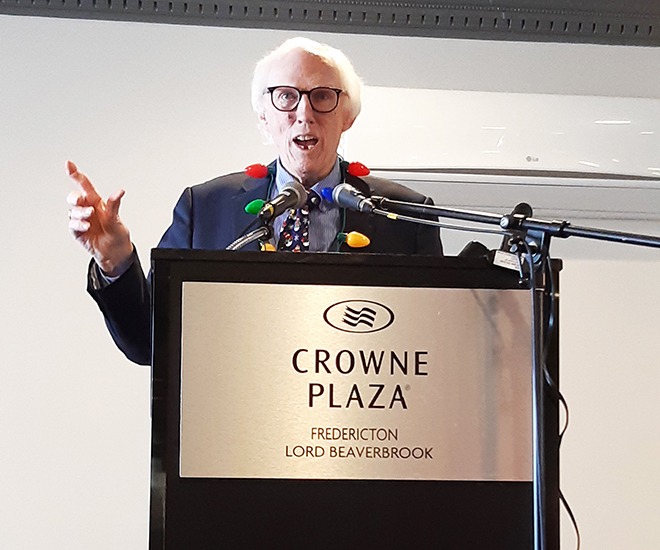 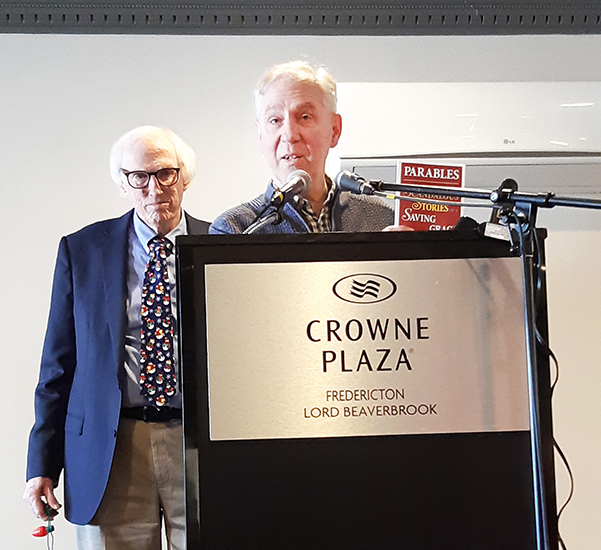 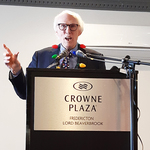 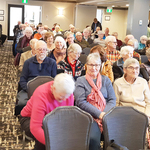 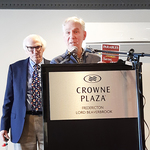 Retired Bishop Bill Hockin kicked off his annual Advent Talks series wearing a necklace of Christmas lights and telling a story about identity, a word often repeated during the 40-minute talk that was entitled “Finding my Best Self – Ancestry.Jesus.”

He told the large crowd gathered at the Crowne Plaza on Dec. 2 that he is often mistaken for others, most commonly Charles Ferris. But one time during a pastoral visit at the hospital, a man in the elevator noted he looked familiar.

‘You look like that old bishop that used to be around here,’ he told Bill.

The game changer event Bill spoke about in his talk was the profound altering of world history by the birth of Jesus Christ, which also changed our personal identity.

A person’s identity in the world is made much easier these days with DNA kits, allowing people to identify who they are and where they came from. Knowing who we are is important to our well-being, he said.

Bill spoke of a favourite movie, Naked Among Wolves, an Eastern European film with English subtitles made in 1963. The setting is a Nazi concentration camp in 1944, under cruel conditions, not the least of which are hunger and violence.

An inmate arrives with a suitcase, and soon the contents are discovered — a young Jewish boy who had been rescued after his parents were taken. The presence of the boy has a striking impact upon the inmates.

“The presence of this vulnerable, helpless child was a game changer in the camp,” said Bill. “He was slowly reversing the dehumanizing culture to something better. Inmates started to feel free to be more human, more supportive of each other.

“They started to hope again — all because of this little Jewish child.”

The plot of that movie is not unlike the impact that a baby’s birth 2,000 years ago has had on the world, he said. Bill quoted Frederick Buechner, from his book, The Faces of Jesus.

“When this child was born in Bethlehem, the whole course of human history was changed,” said Buechner.

That birth of a little Jewish child has made us human, and given us a new, authentic identity, and this identity is the platform that brings us together as one family on earth, said Bill.

He went on to highlight various factors of that divine birth as they relate to us as humans. First, this baby was named and spoken of long before he was born.

“This is a genuine human being, planned and wanted by those around him,” he said, adding that babies were not immediately named in this time period, due to the terribly high infant mortality rate.

“But we read in Luke of an angel telling his mother, Mary, to call his name Jesus,” he said. “Essential to our humanity is that somebody wants us, wants us to exist. As in Jesus, God’s DNA dwells in every person born.

“Pope Benedict XVI said, ‘every one of us begins as a thought of God.’”

Bill cited a book by his neighbour’s son, author David Fergusson, who wrote The Trans-human Code, about the struggle over artificial intelligence and the need to still put humans first. The author refers to humans as “the most advanced technology the world will ever see.”

That ‘advanced technology’ was made in God’s image, and represents the incarnation of God on earth in his son, Jesus.

Historians have noted a profound shift in the world in the second and third centuries as Christianity grew. This Greco-Roman world was witness to strange new ideas, the first of which was the value of children.

Before the advent of Christianity, at the centre of human value was the adult male. One’s connection to an adult male determined his or her value. Outside this circle were foreigners, slaves, women and children who had no power or status.

In fact, classical authors referred to children as not much more than plants. Unwanted children, particularly girls, were abandoned outside to die or be taken as slaves. Empathy towards children was seen as weak.

“This was the world into which Christianity came, calling attention to children and ascribing special worth to them,” said Bill. “This was a revolutionary, game-changing idea.”

Another game-changer for humanity in this time period was the concept of compassion for suffering.
Centuries before, Isaiah talked of Jesus as “a man of sorrows acquainted with grief.”

Bill noted that in the Apostles Creed, there is only one word describing the life of Jesus on earth, the word “suffered,” as in, ‘he suffered under Pontius Pilate.’

Another game-changer is the historical evidence of Christianity as a philanthropic movement that included hospitals serving everyone.

“There were no pre-Christian institutions in the ancient world like this,” said Bill. “It raised the moral bar on what it meant to be human.”

In his conclusion, Bill reminded those present of the life-changing gifts the birth of a little Jewish child has given the world.

“In the face of all the evils in the world — racism, white supremacy, anti-Semitism, homophobia, you name it — we are given, in this genuine little human being in Bethlehem, a source of authentic humanity: a message of peace on earth and goodwill to all.”

Advent Talks continues on Dec. 9 with Dr. Barry Craig (A Grace That Goes Viral), and Dec. 16 with the Rev. Canon Albert Snelgrove (Bridging the Gaps). Both talks begin at 12:10 p.m. and take place at the Crowne Plaza on Queen Street in Fredericton.

1. Retired Bishop Bill Hockin as he began his Advent Talks series on Dec. 2

2. A large crowd of supporters came out to hear the kick-off of the annual Advent series.

3. The Rev. Canon Albert Snelgrove, who will speak on Dec. 16 as part of the series, promotes Bill's latest book, Parables: Scandelous Stories of a Saving Grace.

The Bishop
Past Bishops
Comments for this post are now off.