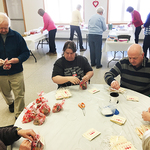 Editor’s note: This is Part II in a series on rural parish ministry in the diocese. There are two common beliefs held by some that this series on rural parishes will challenge: that rural parishes are one step away from dying, and that mission work is predominately done in urban areas.
The New Brunswick Anglican visited with members of the Parish of Richmond, near Woodstock. This three-point parish has had its ups and downs, which is quite likely the secret to its success.

The Parish of Richmond is stable, strong and busy. It has three committed congregations, a loyal leader in Archdeacon Rod Black and a vibrant outreach ministry. But it wasn’t always that way.

“We had no priest off and on for many years,” said Sandra Black. “So that pushed people to act. Layreaders stepped up for services. Many priests stepped in for a few months.”

“Not having a priest made us want more,” said Marilyn Wilson. “We felt so alone. We were struggling. There was no program to help a parish, so we grabbed whoever we could. In the hard times, you grow.”

Faced with no choice, they got to work. One example is a weekly bible study at Holy Trinity in Hartland, begun when there was no priest.

“Now it just runs itself,” said Cindy Derksen. “We just take turns. We did the Michael Frost book and we studied hymns based on bible verses.”

Another is the Wednesday evening summer services at St. Marks in Jackson Falls, tailor-made for people at their cottages on the weekends. It began with a grant from the Anglican Foundation probably a decade ago, and it continues to draw good crowds and lots of visiting priests, some of whom had once served in the parish and make a nostalgic visit each summer.

“We didn’t have a priest, and this way, having it on Wednesdays, priests could come and it didn’t disrupt their Sunday services,” said Sandra. “We rely on visiting priests and ministers.”

Another is the home church at Jackson Falls. They do it each winter, from January to the week before Palm Sunday, to avoid heating bills.

“It’s better attended than church!” said Rod. “I tried to stop it when I first got here. It didn’t work. I was freezing up in the altar and everyone was huddled around the stove.”

Dreamers & visionaries
“There’s a core group who do the heavy stuff, with a whole group who jump in,” said Rod.

“You’re lucky to get one dreamer in a parish,” said Rod. “I’ve got two — Bonnie and Marilyn are visionaries.”

They — and others — come up with innovative ideas and plans that have led to a long list of outreach missions.

“We all have gifts and talents to use,” said Marilyn. “I have a lot of people around me who encourage me to use those gifts.”

It was Marilyn who paid for a drone to film the turnout for Thy Kingdom Come at Holy Trinity in Hartland. They surrounded the church and prayed during the annual prayer event between Pentecost and Ascension Day, and a drone was hired to capture the amazing shots.

The outreach in the community among St. John’s in Richmond Corner, Holy Trinity in Harland and St. Mark’s in Jackson Falls includes something for everyone: financial support for children to attend Camp Brookwood; Christmas carolling; a discretionary fund for community members in need; strawberry teas to raise money for a young woman in the community needing a lung transplant;
Christmas tea for seniors; lunch for Woodstock’s Memory Café; bathroom and refreshment station in the church during parades in Hartland; food bank support; and a Valentine’s Day cookie delivery to shut-ins.

At St. Mark’s there is another rather personal outreach to its tiny community.

“There are three families near the church where the grandparents are raising their grandkids,” said Sandra. “So we drop off little things for them — McDonald’s gift cards, things like that. It’s just to let them know they’re not alone.”

Another example of outreach to their neighbours is this compelling story: “One of our neighbours was doing cancer treatments, so we decided to do up a sunshine box for her,” said Marilyn.

They packed a box with magazines, lotions, books, earrings, snacks and so on — one little gift for each day of treatment for a woman who does not attend their church, “just so she knows we’re there supporting her,” she said.

A cobbled past
There is a very practical pay-off to having such a committed group of parishioners.

“The vestry says we’re not here to make money, we’re here to be God’s hands and feet,” said Marilyn. “We support each other, we have things that bring us together, but we look beyond.”

With three congregations and buildings to juggle, Rod uses a revolving schedule for Sunday services. Each week, he presides at two of the three points, and layreaders fill in at the third. It’s fair to all and seems to work well. He’s found, though, that each congregation is unique.

For example, Holy Trinity, situated very close to the world’s longest covered bridge, has a small, faithful congregation, one of seven churches in a very small area, said Cindy.

“This is a group of individuals who come from a distance but find something attractive in the worship,” said Rod.

“And our warden calls every parishioner before the service to remind them of the time, which changes due to Rod’s schedule,” said Cindy.

“That’s what I love about our parishes — our differences,” said Marilyn. “We’ve discovered we’re all distinct. We can do parish events, but they’re led by an individual church. We work together.”

That desire to work together is rather amazing when one considers their history of being cobbled together as a new parish. St. John’s used to be part of the Parish of Canterbury; Holy Trinity belonged to a parish upriver; and St. Mark’s was a mission church.

Part of the unity has been through intentional behaviour — including all three congregations in activities, helping each other with initiatives, and treating each one equally. For example, during Holy Week, Rod holds services in all three buildings.

The union has resulted in a modern church in Richmond Corner, the parish centre, with an attached hall and a new rectory, finished in 2008. The church was consecrated in 2018. The added bonus is the geothermal heating, which results in huge savings.

“It costs less to heat the whole church than the rectory,” said Rod.

The entire parish has about 55 members — dreamers, visionaries and hard workers who together, get a lot done for their parish and their rural community.

“We always had all kinds of ideas and visions, but we always waited for a priest to get us going,” said Sandra, adding things are different these days.

“Rod’s gift is to tell us to keep going.”

1. Parishioners gather to pray in downtown Hartland in June during the Global Wave of Prayer initiative called Thy Kingdom Come.

4. Parishioners gather to prepare for the St. Valetine's Cookie Mission, held every year as an outreach to bring some cheer and friendship to people in the community who cannot easily get out to events.

This is a wonderful Good News story as we so often hear of only bad news. May God bless you ALL as you serve our Lord and Saviour.

An inspiring story about our friends and neighbours!

Fantastic to hear such great stories of people who know what church really is all about.

It's so wonderful to hear the good news of your Parish Rod Would love to get up to visit you and Susan? Blessings Peggy

I. Am. A 94. Year old. anglican. And a 60year old praticing member. Of ST. Johns church. Richmond corner .I love all three churches but worship now. At. St Marks because of their open honest. Friendliness. And. the. building is. so. like. my. home. church. at. richmond. Corner. That was.... in my opinion ... Needlessly. Torn down..I. Am. A life member. Of camp brookwood Board. and proud. To. Support it all year through ..my God continue. To bless the parish.. Amen