‘Her faith did not waiver’: Janet Edwards laid to rest 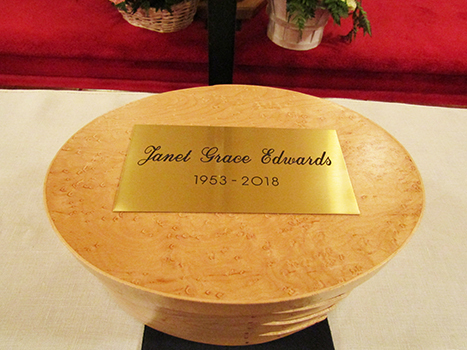 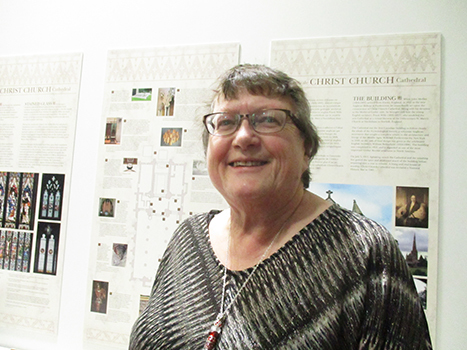 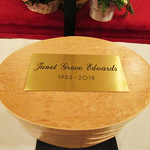 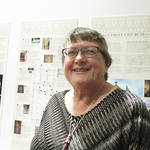 The life and witness of Janet Edwards were celebrated Nov. 13 at her church, Christ the King, in the Parish of Fundy and the Lakes in East Saint John.

Janet was the wife of David Edwards, bishop of the Anglican Diocese of Fredericton. She died Nov. 7 after a brief illness.

Canon Leo Martin, her priest and her friend, welcomed the overflowing crowd and noted an email from Janet’s father in the UK.

“His thoughts are with us at this time,” said Leo. “At this very moment at their church, St. Mary’s, Swanage, they are having a prayer service in memory of Janet.”

The readers were Harold McInnis and Cheryl Jacobs.

Shawn offered a “reflection” because Janet said “I was not to eulogize her,” he said.

Her heart was as big as the outdoors and she was an advocate for everyone she met, including him as a student under her tutelage. She took care of her students by encouraging them when they were troubled, he said, including himself in that group.

She led bible studies at her church, where she was parish evangelist, and she delighted in the scriptures.

“She would get all excited, like a kid on Christmas morning, when she’d found a new insight,” said Shawn.

But Janet had an alter-ego, a puppet named Peter, a part of her and David’s puppet ministry.

“When Peter popped out, I think it was the true essence of Janet,” he said. “A different side came out.”

On a Palm Sunday, Janet had Peter the puppet, and a toddler, but she needed a donkey.

“She ‘chose’ me,” he said. “I got on my hands and knees and walked the aisle with a child on my back. That was 13 years ago and the people of this parish haven’t forgotten!”

“If that was not evident, it became so in the journey of the past couple of weeks in the hospital,” said Shawn. “Love that was funny, pure, full of joy, full of sorrow. Her faith did not waiver.”

Leo was the second to offer a reflection, at Janet’s request.

As he searched his mind, his files and the scriptures, he found the story of Dorcas, also known as Tabitha, in the book of Acts, which most reminded him of Janet.

“I saw such strong similarities,” he said. “They both lived a life of good works. They were two woman who, at the time of death, were dearly missed. And both knew that death was not the end.”

Leo and Janet often visited the sick, but she revealed that she had a hard time connecting with dementia patients. After one visit, where Leo took the lead, she had this to say: ‘You really know how to talk to people with dementia. You can relate to them.’

“To this day I don’t know what she meant by that!” he said.

Leo offered comfort to those gathered by saying, “We will dearly miss our good friend, but we know Janet now rests from her labours. We have the hope of a promised resurrection.”

Ruby Ranson, a friend of Bishop David’s from his time as rector at Stone Church, offered a thank you from Janet’s two brothers who made trips from France and Britain to see their sister in hospital.

They asked that she convey their appreciation for the “tremendous compassion, food, prayers and love they saw extended to their sister. Their desire is for that support to be continued to David.”

Bishop David was the celebrant during the Eucharist. The Primate offered the closing blessing. Afterwards, the parish hosted a reception in the hall.

Janet passed away at the Saint John Regional Hospital at the age of 65. Born in London, UK, she was a daughter of J. Kenneth Claxton and the late Grace Cooper.

Janet worked as a high school teacher in the UK before immigrating to Canada in 1998. She then served in the Church Army (Threshold Ministries) and at the Coverdale Centre in Saint John.

Janet is survived by her loving husband, David; father, Ken; her brothers Michael and Paul; sister Sarah; aunts Beryl and Pamela as well as many cousins in the United Kingdom. Janet is also survived by her stepmother Elizabeth Claxton and her stepfather Derek Martin. She was predeceased by her mother, Grace.

Visitation took place at Stone Church on Nov. 12. Her ashes will be interred at a later date.

Donald Adams over 2 years ago

Wonderful tribute and reflections of Janet. She was dearly loved and we will miss her smile and humour. Thank you Janet. It was an honour to know you and share conversations. God be with Bishop David at this time.

Joanne FITZPATRICK over 2 years ago

JANET WAS SUCH A POSITIVE UPLIFTING PERSON. I HAD THE PRIVILEGE OF WORKING WITH HER WHEN WE DID THE ART AUCTIONS AT TAYLOR COLLEGE A FEW YEARS AGO. WHAT A WONDERFUL TIME WE HAD UNDER HER LEADERSHIP. SHE WILL BE SADLY MISSED BY ALL OF US WHO HAD THE OPPORTUNITY TO KNOW HER AND LOVE HER IN A PERSONAL WAY. SHE WILL BE MISSED AND NOT FORGOTTEN. BLESSINGS TO DAVID AND HER FAMILY.

Robert Taylor over 2 years ago

More than just I were surprised and delighted that the Primate chose to attend. What a wonderful support David must have felt from that alone. Your whole Diocesan family continues to uphold you in prayer, and we know that your faith will not waver, either.

Bruce Smith over 2 years ago

To be one of many by her bedside the day she passed will be a gift never forgotten. Such a strong woman of faith! - a heart of gold, only matched by that of David. They were such a dedicated mission-focused team. May David know how deeply he is loved, appreciated, and supported by his vast circle of friends and colleagues in mission.