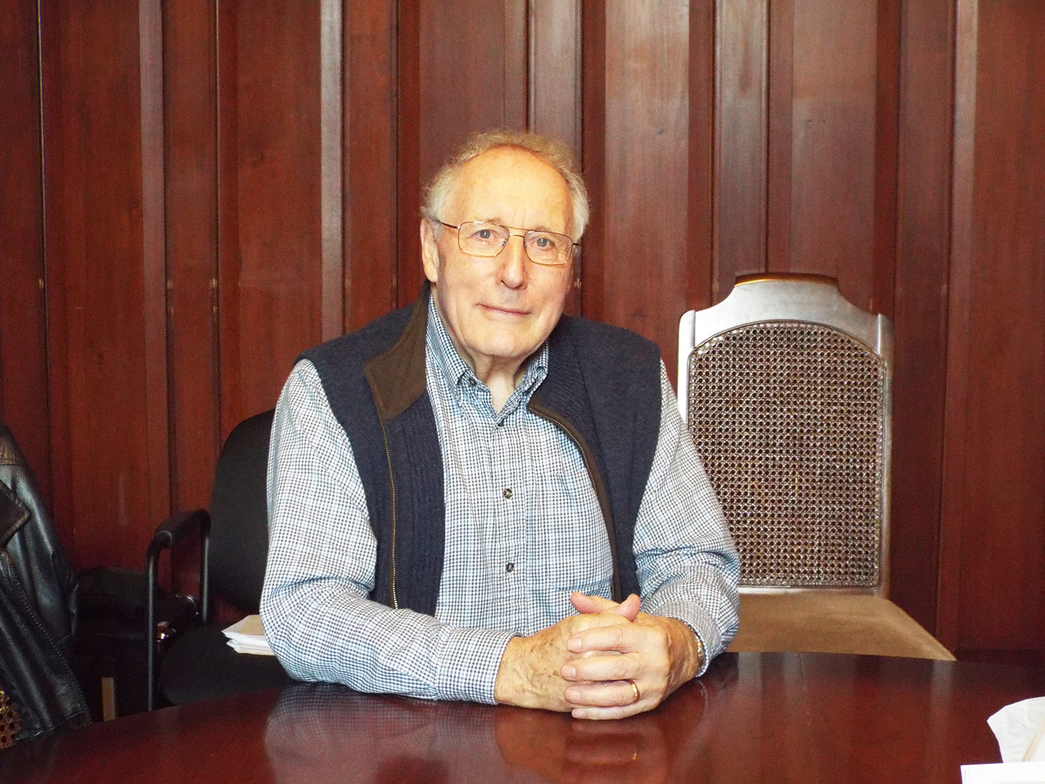 EDITOR'S NOTE:  Bishop George Lemmon died on Sunday, May 22, after a period of failing health. This story is from 2015, part of a series on the diocesan bishops gives some insight into the much-loved man.

“I wasn’t fussy about becoming a priest,” he said. “I felt I had a ministry already, but I came to realize that I probably had to become a priest to do the mission.”

His life’s work began the summer he graduated from high school — 1949. His father’s printing business was ready to welcome him, but he had no idea what he wanted to do in life. So his father told him to spend the summer at the family cottage in Grand Bay and think it over.

He had a great summer at the cottage, with lots of friends and good times, but never once gave a serious thought to his future. At the end of the summer, he went to work for his father, beginning a six-year apprenticeship to one day take over the business.

“I copped out,” he said, although he enjoyed the business and was good at it.

It was that October that his life changed — an iconic evening he will never forget. He and a friend were waiting for a dance to begin. In those days, dances didn’t begin until 9:15 because girls who worked in shops worked until 9 p.m.

His buddy suggested they go to church in the meantime. There were anniversary celebrations at his church, St. Luke’s in Saint John. He knew all about the special services because he had handled the print job for it.

They went in and sat in the back row — to make a quick and easy exit, he said. The speaker was Canon Isherwood from Halifax, “and he really hit me between the eyes. The Lord used him to get to me.”

Nevertheless, he went to the dance, took a girl home to east Saint John and missed the last bus to his house in the north end.

He began to take his relationship with God much more seriously, reading the Bible, teaching Sunday school, and taking post-confirmation classes. A year or so later, he and some friends began an interdenominational youth group in Saint John.

“We had 50 attending by year’s end, and 12 of us went into ministry,” he said. “What that told me about ministry is you have to be with the people and meet them where they are.”

From there he became a lay reader, and his first service on his own was memorable. He was dropped off in Barnesville on a snowy Sunday morning, went inside, lit the fire and rang the bell.

No one came, so he rang the bell much more vigorously. Finally one woman arrived. She’d heard the bell.

“It was one-on-one, and after that, I never worried about numbers,” he said.

When his apprenticeship was up, he regretted having to tell his father he was going to return to Saint John High School to take Grade 13, which would enable him to go to university.

He graduated from the University of New Brunswick in 1959 with a BA in history and economics and a new wife, Lois, whom he describes as the most compassionate and caring person he’s ever known.

That fall they moved to Toronto where he began his studies at Wycliffe, still unsure of his future, but quite convinced he was to pursue some sort of ministry, hopefully in missions.

His old church, St. Luke’s, wanted him as curate upon graduation, but that’s not what Bishop George wanted. Instead, he and Lois went to Canterbury.

Their second posting, in Florenceville, officially began the day their daughter was born.

“We moved on Friday night and Mary Lou was born Saturday morning,” he said.

His time in the upper St. John River Valley was especially fruitful, having brought two institutions into the diocese: the Annie I. Lockhart Home for the Aged, and Camp Brookwood, both gifts from a non-Anglican doctor in the area, Dr. James Lockhart.

From there, he served in Renforth, Sackville and Christ Church (Parish) Church in Fredericton, before being elected bishop in 1989.

“It was a shock to become bishop,” he said. “It was not something I wanted. I always wanted to be a street pastor.”

He had been happy as a parish priest who also worked beyond the boundaries of what others might consider the norm. He loved street ministry in Saint John, prison ministry in Dorchester, coffee houses for young people, Bible studies in people’s homes in the countryside beyond Canterbury.

Despite streamlining the electoral process for the election of bishops (there were 50 names on the ballot, and 18 ballots over two days during his election) and welcoming female priests at a time when not all clergy backed him on the issue, Bishop George feels somewhat disappointed with his 11 years at the helm of the diocese.

“It was the decade of evangelism and I think we frittered our way through it,” he said. “I don’t feel I was able to do what I wanted to as bishop.”

What he wanted was to stir things up — disturb the church, in his words.

“I wanted to get out on the street and change our whole approach. The real ministry is outside the building,” he said, adding he’s pleased to hear Bishop David talking about the need for change now.

His fond memories revolve around visiting the parishes and hearing their stories.

“That’s what I liked — the fellowship, meeting the people,” he said. “I’m not an administrator. I always said Phyllis (Cathcart, his secretary) ran the diocese. I just ran around it.”

Since handing the reins to Bishop Bill Hockin, whom he describes as the best preacher in Canada, he has been anything but retired. For the past decade and a half, the 83-year-old has served part-time in Fredericton, New Maryland, Grand Manan, Saint John and for the past five years, in Fredericton Junction.

He and Lois divide their time between Fredericton, where their three children and eight grandchildren live, and their cottage in Morrisdale on the lower St. John River.

“I thank God for each new day,” he said. “I feel blessed. I’m very thankful for the life I’ve had.”

The Bishop
Past Bishops