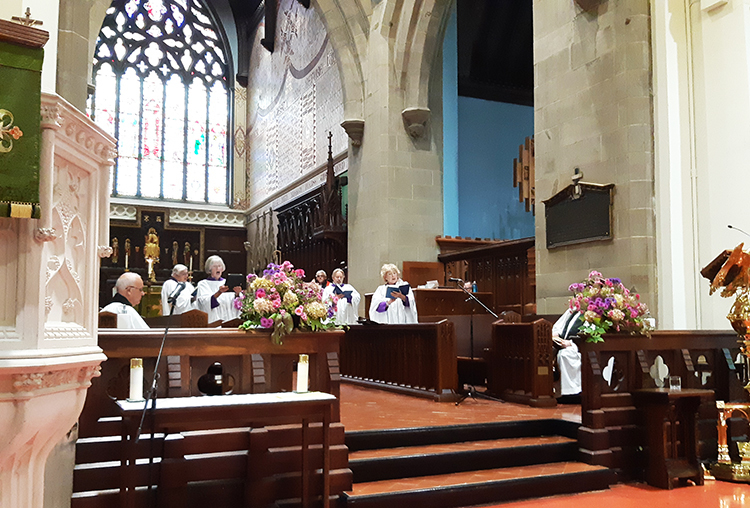 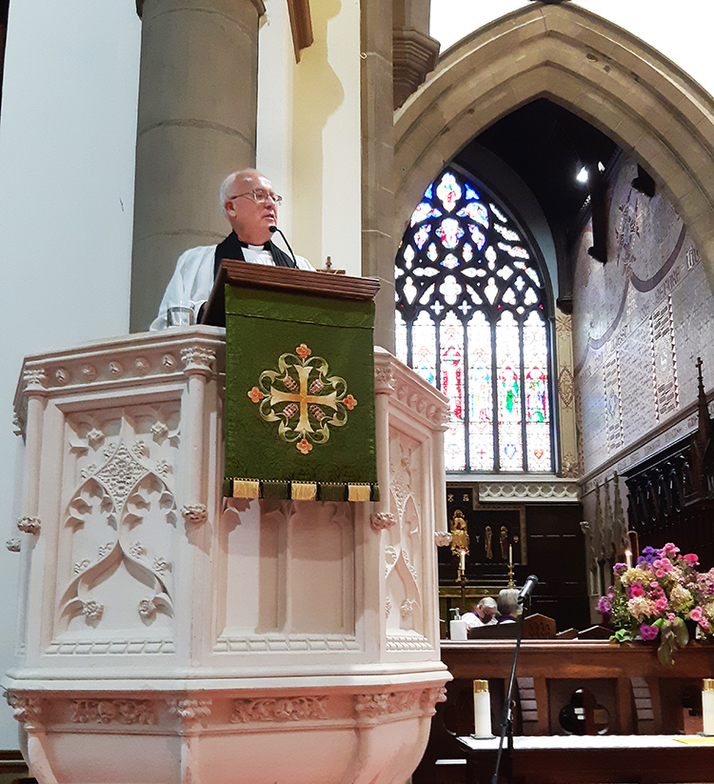 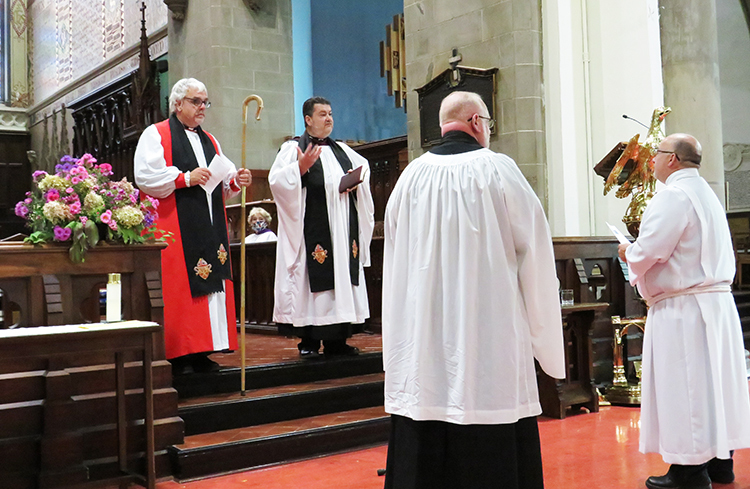 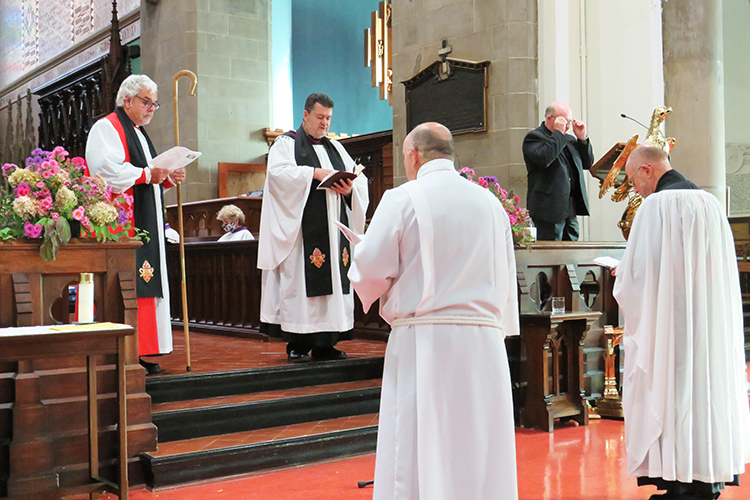 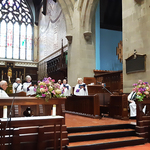 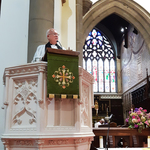 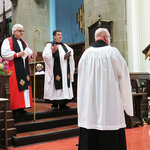 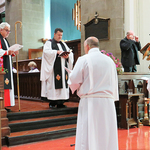 It was an unusual service of Installation and Collation of Perry Cooper, Gerald Laskey and Kevin Stockall on Oct. 4. Perry and Gerry were installed canons of Christ Church Cathedral, while Kevin and Perry were collated archdeacons of Fredericton and Chatham, respectively.

Dean Geoffrey Hall outlined the pandemic ‘rules’ for the service: no corporate singing (though you could hum), no offering plate passed, and no refreshments afterwards. A four-person choir and organist provided the music.

There was no procession from the hall to the cathedral. The three men sat in separate, well-distanced chairs below the chancel steps. Other canons and archdeacons sat in the regular pews, not in the canon stalls.

Because attendance was limited, and also to allow for contact tracing, people were asked to sign up in advance. Close to 70 people attended. The presentation of licences took place at the end of the service, something normally done in the hall during fellowship.

The readers were Hank Williams and Cheryl Jacobs. The Ven. John Matheson preached. He noted by his calculation, he is the longest serving priest still in full-time ministry in the diocese.

“It’s funny how one day you are among the young ‘Black Shirts’ making a pain of yourself at synod, and then you wake up one morning and you’re an archdeacon,” he said during his sermon.

He noted the Roman Catholic meaning of canonization, which has prerequisites: dead for at least five years; declared a servant of God; shown heroic virtue; performed verified miracles.

“Now I know the men before me this afternoon are indeed saints — we are all called to be saints, according to St. Paul — and I have no doubt that they all qualify in a number of the steps I have outlined, but I am afraid you are disqualified by the first condition!”

John noted the confusion over the new titles the three men now hold and the question of ‘what should we call you?’ And some will ask what a canon is.

“It’s best in most circumstances to just say, ‘It’s a reward for working hard and staying out of jail for the last 25 years!’” said John, adding canons in the Anglican church set the standard of virtue and faithfulness for junior clergy and laity.

The gospel reading was Mathew 14: the beheading of John the Baptist. This man preached the same message as Jesus: repent and believe, said John.

“There has never been a more important imperative than John’s: ‘Behold the Lamb of God, behold him who takes away the sin of the world.’

“Bishops, archdeacons and canons should be like John the Baptist, not only pointing the say to Jesus, Lamb of God, but also in their preaching — repent and believe.”

But in this generation, the question might well be, ‘repent from what?’ he said. There is truth, there is my truth and your truth, and a person with power may impose his truth on others.

“So where do we begin? The collect for John the Baptist’s Day suggests we have to begin with ourselves,” said John. “Ouch!”

He repeated John the Baptist’s, and Jesus’s message: repent and believe.

After the sermon, Dean Geoffrey led the installation part of the service and the Rev. Bob Barry read the instruments of appointment. The dean and Archbishop David Edwards led Perry and Gerry to their respective seats as canons.

During the collation, the Rev. Ted Quann read the instruments of appointment and Abp David led Perry and Kevin to their respective seats.

The men declared before God their promise to be diligent and faithful in their roles.

The service was live-streamed to allow family and friends in other parts of the diocese and the country to watch online.

4. Archbishop David Edwards officiates at the collation of the Vens. Perry Cooper and Kevin Stockall, with Dean Geoffrey Hall, and at far right, the Rev. Ted Quann.