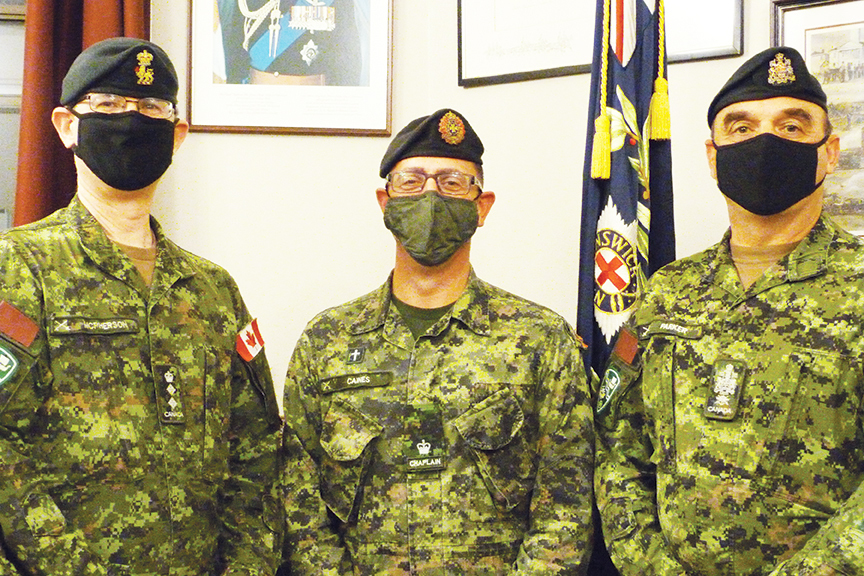 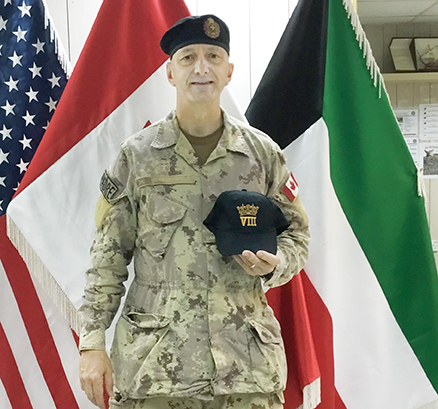 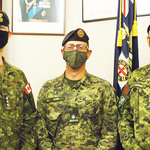 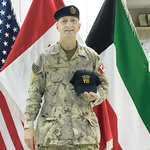 Mike, a Reservist with the Canadian Armed Forces for the past 10 years, leaves behind 3 Field Artillery Regiment, based in Saint John and Woodstock, plus 37 Signals Regiment and 37 Service Battalion. The new post means he will oversee all Reserve military chaplains in New Brunswick and Newfoundland.

“It’s like becoming an archdeacon,” said Michael of the promotion.

But he won’t be saying good-bye to his old regiment just yet.

“Part of my job is to recruit my replacement,” he said. “I’m still a unit chaplain.”

MAJOR VANBUSKIRK
The change in role and promotion come because of a position change above him. He now holds the post that the Rev. Canon Major Chris VanBuskirk held.

Chris was recently promoted to Deputy Division Chaplain of 5th Canadian Division, responsible for all Reserve chaplains in Atlantic Canada, though his rank remains Major.

“I’m with chaplains more than with troops,” he said, adding that the bright side is there are units without chaplains, and filling in there gives him opportunities to be with fellow soldiers.

Chris spent an extended deployment in Iraq and Kuwait in 2018. He was grateful to his parish for their understanding, and with this latest move in his Reserves career, he continues to feel grateful.

“This ministry is a real blessing. I am grateful to God for that. And I really appreciate the support of my church family and the bishop as well.”

MAJOR CAINES
Mike has a long history with the Canadian Armed Forces Reserves, having also been in the Royal Canadian Navy Reserves for seven years.

A military chaplain “lives the rhythm of the unit,” he said, adding he takes the same courses, briefings, drills and training as the other soldiers in his unit.

“You tag along and find ways to help out,” he said. “And you live for the words, ‘Hey Padre, do you have a minute?’ You are the front-line faith contact.”

A military chaplain is a resource for the chain of command, and a help for soldiers seeking guidance, pointing them to the right resources, if that’s what they need.

Mike’s new role includes overseeing the work of seven chaplains, much of it through video conferencing and telephone. Occasional travel to Newfoundland is expected, he said.

“You have to be seen on the ground at least once in awhile,” he said of travel to the units.

Mike is bittersweet about the change, as he has grown close to the soldiers he sees every week.

“You get to know members very well,” he said. “You are their only faith connection in some cases. I’ll miss that, but this is the way it works.”

However, he does feel well-equipped for what lies ahead.

“Chris has been a very good leader,” he said. “He’s prepared me well.”

As part of his new role, Mike is looking for interested clergy to join the Reserves as chaplains. There are four vacancies in New Brunswick and one in St. John’s, NL. Recruits must have two years of ordained experience and hold a Masters of Divinity. They must also be physically fit to pass the tests and medical that all soldiers must undergo.

The Rev. Canon Major Chris VanBuskirk during his 2018 deployment to Iraq and Kuwait.
Submitted photos

St. Andrews
Church of the Resurrection

Mike- what a wonderful ministry both you & Chris are involved in. Blessings of well-being!