Sunday school children devise, carry out a plan to feed their classmates 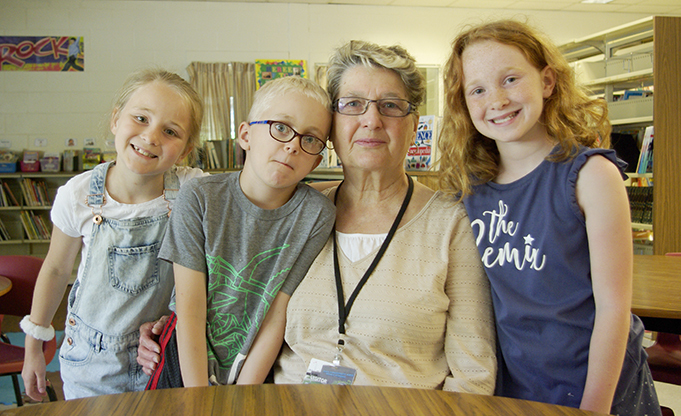 An annual diocesan bowling tournament that raised over $40,000 to combat childhood hunger in the province just wasn’t enough for the Sunday school children at St. Michael & All Angels in the Parish of Minto & Chipman. They wanted to do something for their own school, Minto Elementary Middle School.

Their priest, Kevin McAllister, is the principal organizer of the bowling tournament, so they’d heard plenty about it and had even bowled in it.

But the money they raised in Minto went to a high school backpack program, not their elementary school, so the children brainstormed with their Sunday school superintendent, Bonnie Anderson.

They came up with a plan to bake treats — cake pops, cupcakes and cookies — and sell them to the congregation, using the money for classroom snacks. For six weeks they baked and sold their products.

“We went upstairs after church and we sold treat bags,” said Jack Thurott, 7, who just finished Grade 1 and is described as an excellent salesman.

“He didn’t wait for people to come to him,” said Bonnie. “He went into the aisles and said, ‘are you going to buy some treats?’”

They raised about $350 and used some of the money to buy seven lunch cooler bags, for sale as part of the bowling tournament fundraiser. Then they used the rest to buy snacks — juice boxes, puddings, fruit roll-ups, goldfish crackers and so on.

“We spent one morning putting it all together and then took them upstairs to show everyone,” said Bonnie.

Seven lunch bags, for seven kindergarten, Grade 1 and Grade 2 classes at their school, were filled with snacks, with plenty left over for teachers to replenish the bags.

Now the filled lunch bags are in each of the classrooms, available to any child who is hungry or forgot their snack.

“The effect is less kids are hungry,” said Jack, who obviously grasps the aim of the tournament and their spin-off good deed.

“It will help people if they’re hungry,” said eight-year-old Tenley van Doren. “They can get cranky sometimes if they don’t eat.”

“When you’re hungry, it’s horrible,” said Mylie van Doren, 10. “I’m happy because they get to choose a snack.”

The children were called together at school recently to present their snack donations to the various classes.

“They were very proud of themselves,” said Bonnie. “They explained to the classes, ‘this is what we did at our church. If anyone needs a snack, here it is.’”

Kevin couldn’t be more impressed with his young parishioners, calling them a blessing to the church and the village.

“Just over a year ago, the children received their first communion,” he said. “I believe the preparation that was involved helped to open their eyes to the fact that God's Kingdom extends outside the walls of a church, and we are responsible for the care and well-being of all who we share it with.

“They studied the course Life in the Eucharist, which drives this point home with some creative projects, and I am very pleased that they have accepted their Baptismal Covenant and are doing mission to feed people through their own ideas, hard work and prayerful commitment to love others as Christ loves us.

“What it did for the church? As adults we tend to over-complicate things, and this outreach mission that our kids took the lead on helps our mature parishioners learn that feeding others doesn't have to be complicated.”

Jack believes his Sunday school is onto something good.

“Maybe we could do this every year!” he said.

Three other children, Sadie Wilson, Scarlett Wilson and Cohen Chase, were also involved in the project but were not available on the day of the interviews.

Great story. It nourishes the soul. Bonnie has always been very active in children's ministry. Great job Bonnie and the kids!

Bravo! What a great project! I believe these children will continue to have a heart for mission, and joy to be creative workers and leaders. Kevin and Bonnie, you obviously lead by example, and the Lord is blessing your "talents."