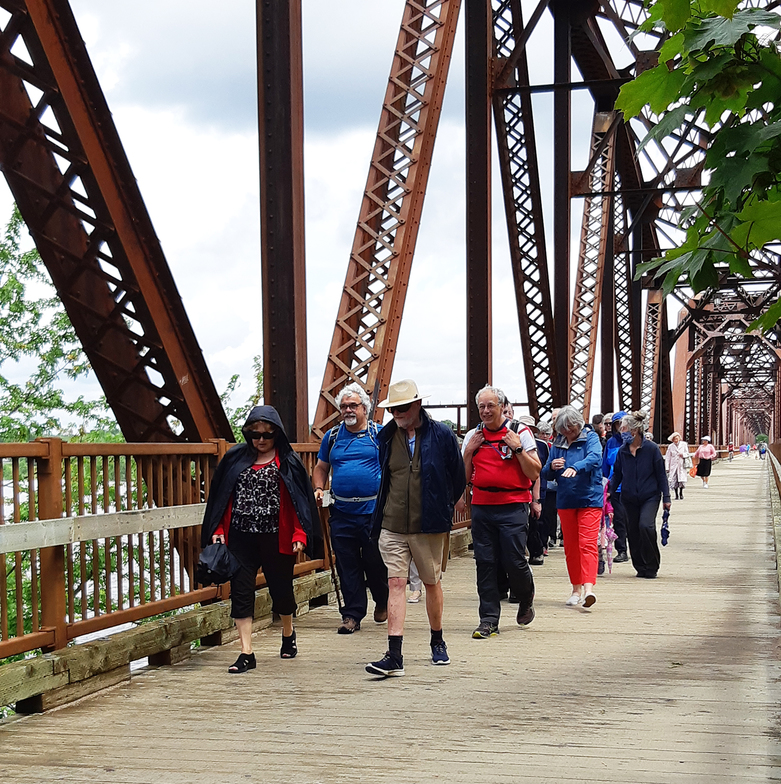 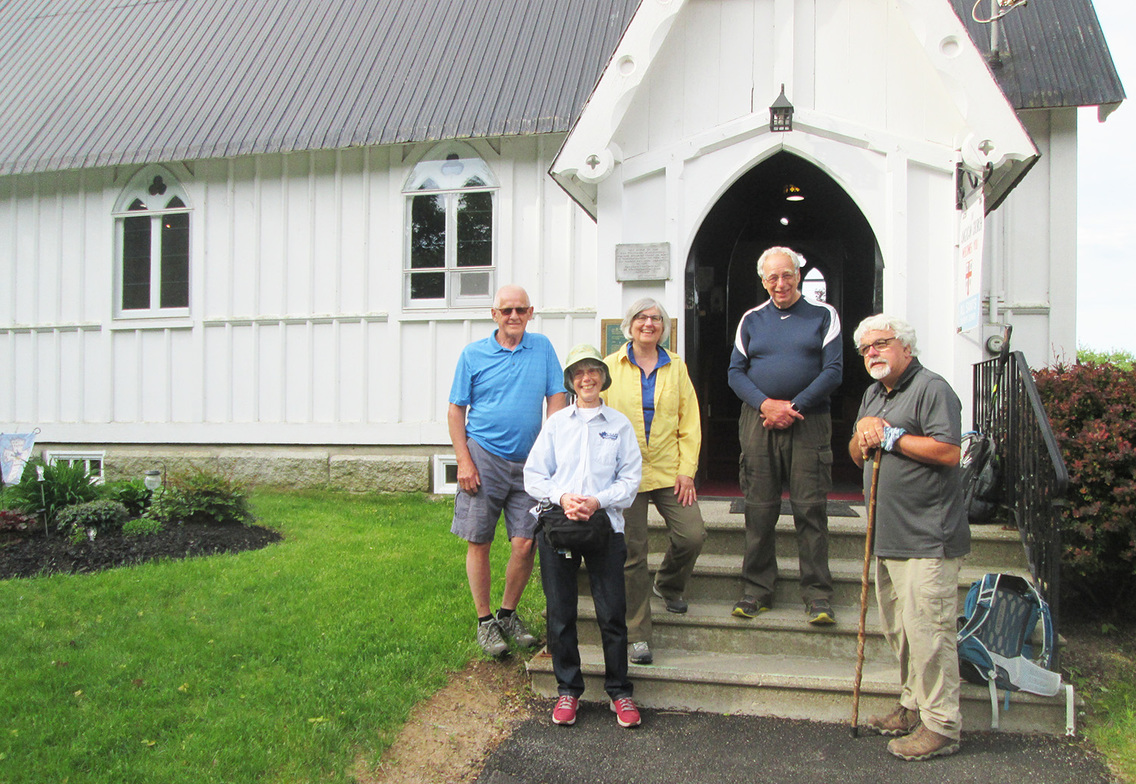 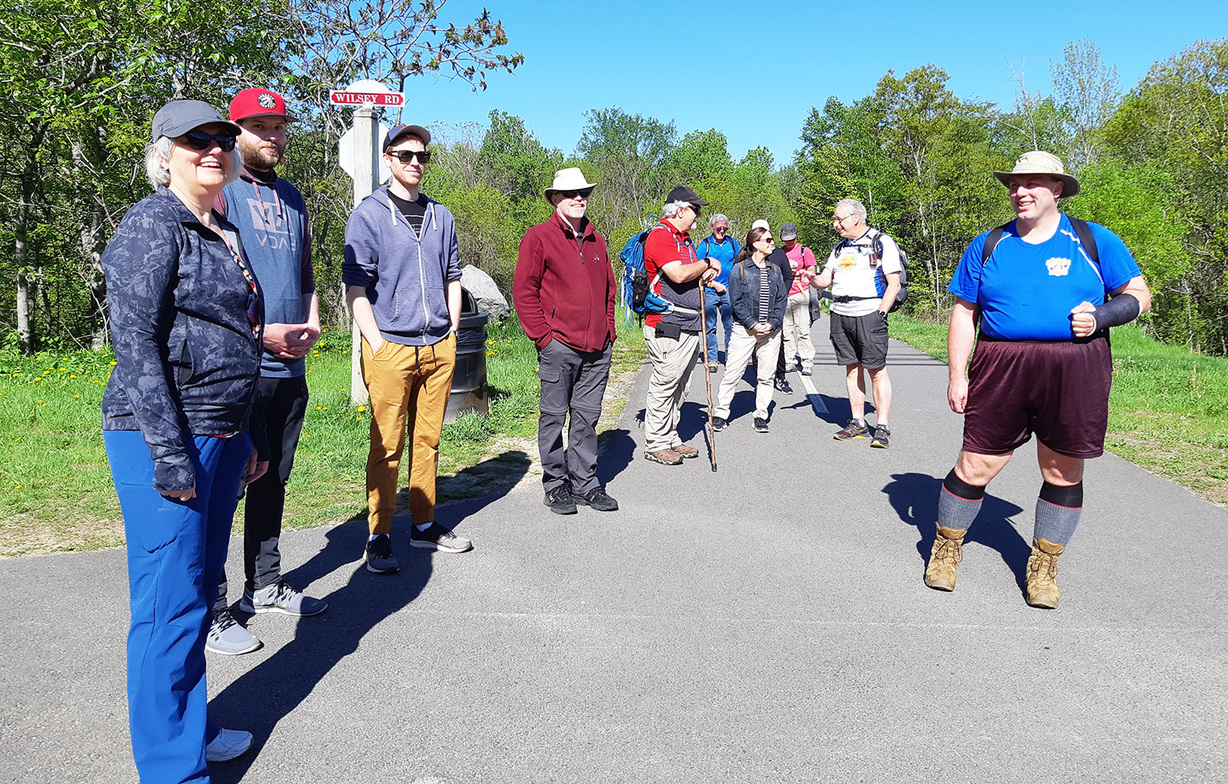 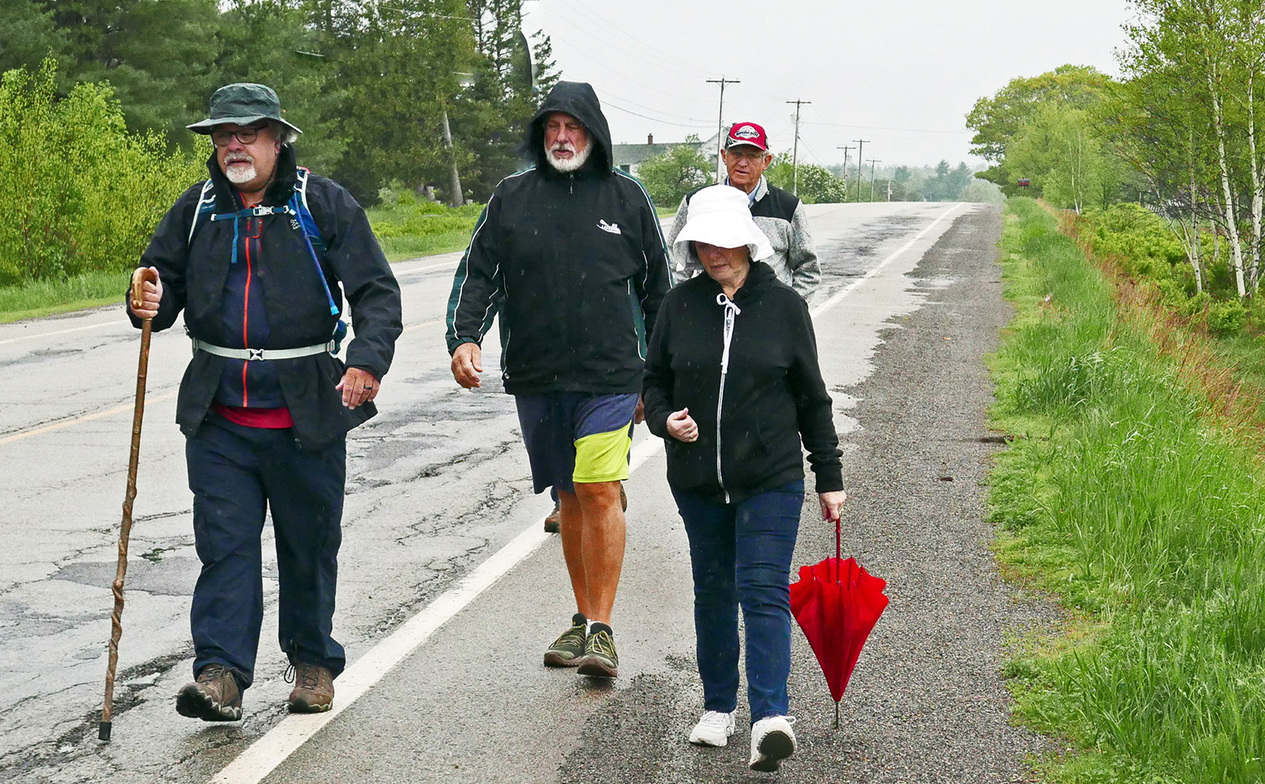 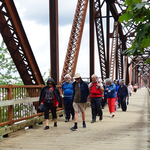 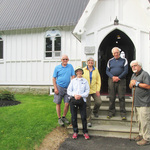 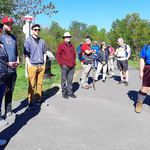 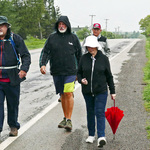 The final annual pilgrimage of Archbishop David Edwards was completed on Pentecost Sunday, June 5, with a walk across the St. John River from St. Mary, York to Christ Church Cathedral.

About 25 people, mostly Cathedral members, met him at the north side of the Bill Thorpe walking bridge and accompanied him to the Cathedral. He arrived just before 2 p.m., and 20 minutes later was preaching a sermon during an afternoon service that was well-attended.

In 2015, Bishop David set out to walk through one of seven archdeaconries each year. He began in the Archdeaconry of St. Andrews, and despite some bumps along the way — his mother’s illness that sent him to the UK, the pandemic, and this year, the funeral of retired Bishop George Lemmon — he finished in the Archdeaconry of Fredericton.

Throughout each annual pilgrimage, he and walk co-ordinator Trevor Fotheringham relied on parishes for places to sleep, food to eat, and services to organize. As the pilgrimage gained momentum, more and more parishioners joined the pair for an hour, a day, or even more in some cases.

Some have joined the walk year after year, including Parish of Richmond’s Cindy Derksen and diocesan chancellor David Bell.

Bishop David said from the outset that he wanted to walk to meet people in a more unconventional way, see the diocese, and enjoy the natural environment. He has always been an avid walker. This year, he was asked to bless a horse, and of course, complied.

This final walk began in Hoyt on May 21. Then it was on to Fredericton Junction, with subsequent walks in Fredericton, Minto and Chipman, Doaktown and Boiestown, Oromocto, Cambridge, Stanley, and Upper Keswick and a canoe trip at Camp Medley.

On May 25, his staff joined him on a walk from St. Margaret’s in Fredericton through Lincoln.

“Things have gone very well,” he said that day. “The parishes have been excellent. People have been out walking with us every time. It’s good to meet people and see how the different parishes are doing.”

On the final day at the Cathedral, the bishop was happy to see his seven-year project completed.

“It’s gone well, I think,” he said. “It’s been a tough walk at times, but we’re getting old. We’re seven years older than when we started.”

Even with the fatigue, he hinted at another walk in the future.

“I’m mulling the possibility of a different type of pilgrimage,” he said, adding he has a few possibilities in mind.

PENTECOST SUNDAY
Dean Geoffrey Hall congratulated the bishop on the end of his pilgrimage. While the bishop preached, thunder rolled and the heavens opened with downpours that included hail.

David explained why he decided to walk the diocese, recounting how, as a young boy, his mother told him the story a bishop in Lichfield who went from parish to parish on horseback.

“Somehow I became a bishop …and that story stuck with me,” he said.

In walking, he wanted to bring a sign of the presence of God in the various communities, adding that Pentecost isn’t just about personal renewal, but community renewal as well.

Bishop David told those gathered that at the House of Bishops, twice annually held at a monastery in Niagara on the Lake, he would walk a certain route each day. This year, however, roadwork forced him to choose a new route, which took him next to an electrical plant.

The building had a statue of Nikola Tesla outside it, prompting some thought and prayer.

“I prayed into that imagery, and the Day of Pentecost came to mind,” he said.

Tesla’s dream was that someday, people could plug into electricity anywhere, without wires.

“We can plug into the Holy Spirit, wherever, whenever we want,” he said. “The Spirit’s power is there for us to plug into.”

PILGRIMAGE WRAP-UP
Bishop David expressed thanks to several people, including his secretary, Cheryl Jacobs, and her husband, Peter, both of whom have taken on many tasks necessary for the success of the pilgrimage.

He also thanked the people of the Parish of Richmond, who were present for the service.

“You have supported this walk all the way through,” he said.

While Trevor is from the UK, it was through David’s late wife, Janet, that David got to know him, since they both worshipped at the same church.

He expressed his thanks for Trevor’s unwavering support and help during seven years of walks, awarding him a certificate of merit.

Finally, David proclaimed that of all the mosquitos and blackflies he has encountered in seven archdeaconries, they were worst on the stretch of trail from Lincoln to Oromocto.

PHOTO CAPTIONS:
1.  A group of about 25 met Bishop David at the north end of the Bill Thorpe Walking Bridge in Fredericton on the final leg of the pilgrimage, shepherding him to Christ Church Cathedral, where he preached a sermon during an afternoon Pentecost service.  McKnight photo

4.  Bishop David, Mark Slader, and Addie Marshall, with Neil Orchard in the background, spend a rainy day in the Parishes of Gagetown and Cambridge & Waterborough.  David Hamilton photo