Lenten Talks kick off in Fredericton 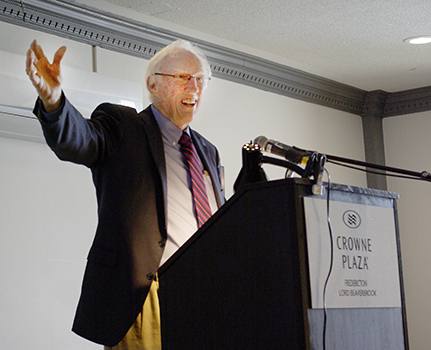 Retired Bishop Bill Hockin has reprised his Lenten Talks series again this year with three parable presentations on March 11, 18 and 25. He spoke at the first one and will speak again March 25. The Rev. Canon Albert Snelgrove will speak on March 18.

The bishop’s first presentation was called The Scandal of the First Responders, and of course dealt with the Good Samaritan as told in Luke 10. He read the passage and asked those gathered if anything stood out for them. Several people responded.

The story begins with a lawyer — a man well-versed in the laws of God — asking Jesus a question about eternal life. It was a test and led to the question, ‘who is my neighbour?’

“’Neighbour’ is a very loaded word,” said Bill. “How long is the list of people I need to care for? Who else am I obliged to?”

But instead of answering with a list, Jesus launched into the parable known as the Good Samaritan, a term well-known in our society.

The setting for the parable was one everyone in the crowd would have been familiar with. The road from Jerusalem to Jericho was about 25 kilometres, windy, dusty and hilly. Muggings were not uncommon.

The second part of the parable, the incident, involved a mugging, where a man was left beaten and robbed. Two people, a priest and a Levite, happened to pass by, “on the other side.”

“The priest would have known the verse in Leviticus — “Love your neighbor as yourself” — but it was a deliberate act to avoid contact with the victim. In anyone’s language, he was not a good responder,” said Bill.

Levites served priests in the temple, and this one too would have known the relevant scriptures dealing with a beaten person in need, said Bill. And both would also have been familiar with the love and compassion of God described in the Psalms.

“But they did not respond,” said Bill.

Bill cited the writing of Father Thomas Keating, a Trappist monk, who said priests, Levites and ordinary lay people made up the triad of Jewish society. Many listening to Jesus that day would have been expecting that the third person to come along would have been a lay person, and that the lay person would be the hero.

“But that’s not the story Jesus tells,” said Bill. “It was shocking because it turns out to be a Samaritan. Not a good priest, not a good Levite, not a good lay person. It was a Samaritan!”

Samaritans were the furthest thing from the good, he said: outsiders, corrupt traitors of Israel, mortal enemies of the Jews.

“You didn’t invite a Samaritan to dinner!

Yet here was this mortal enemy stopping, and not only stopping, but tending to the needs of the victim. And not only tending to his needs, but doing so with extravagance. He wasn’t dribbling wine, an antiseptic, and oil, a balm, on the victim’s wounds, he was pouring them on, said Bill.

Such extravagance was important in the story, and not unlike the same reaction of the father to his prodigal son in another parable Jesus told. It was not just a little bit of care, but more than enough.

The bishop spoke of the principles of Christianity, saying, “Compassion is the non-negotiable work of a follower of Jesus Christ. Whatever else we do in the church … it comes second to being a compassionate person. Compassion is feeling someone else’s pain and doing something about it.”

Empathy has its limits and falls short of compassion, he said.

“The priest and the Levite might have been empathetic to the man on the road, but they did nothing about it,” he said. “Compassion always costs us something.”

While divisions and boundaries within Jewish society might have kept people from being inclusive, there are no such boundaries in God’s kingdom, said Bill. Christ has been our first responder who saw us lying in the road, and he says to us, ‘I have done this for you; now you do this for others.’

Unfortunately, both the priest and the Levite failed in their religious duties.

“That’s the scandal in the story, but we are not Good Samaritans all the time either when confronted on the road by a stranger,” he said.

He recalled a vacation in Victoria during the Easter season. He’d gone to a bakery to buy hot cross buns, and was walking back with them under his arm. While crossing the street, he met a man who said, ‘Got your lunch there, eh? Must be nice to have a lunch.’

“I’ll be looking for him again this April. Hopefully I’ll do it differently this time.”

First century Roman society was rather sophisticated at the time of Jesus. They cared for their families, for people in their own income bracket. But it was the Christian church that added the homeless, the poor, the hungry, the destitute to that list, said Bill. It was a new concept and it’s had a lasting impact.

It was five Christians from Switzerland who founded the Red Cross, which ultimately led to the founding of Doctors Without Borders. And from Youth For Christ came World Vision, he said.

“They heard the story of the Good Samaritan and they wanted to be one themselves,” he said.
Bill ended with a prayer and the Peachtree Benediction.

The Lenten series continues at the Crowne Plaza Hotel in Fredericton the next two Mondays at 12:15 p.m. March 18 is entitled Remember the Time (from Luke 15); March 25 is entitled Getting the Most out of Church (from Luke 18). The talks conclude by 1 p.m. All are welcome.

Bruce Smith about 2 years ago

What a gift to have Bishop Bill offer this Lenten challenge. The Word truly is alive, and Bishop Bill has a way of encouraging our hearts and our minds to listen well. Thank you, Gisele, for sharing this glimpse of his message with us.