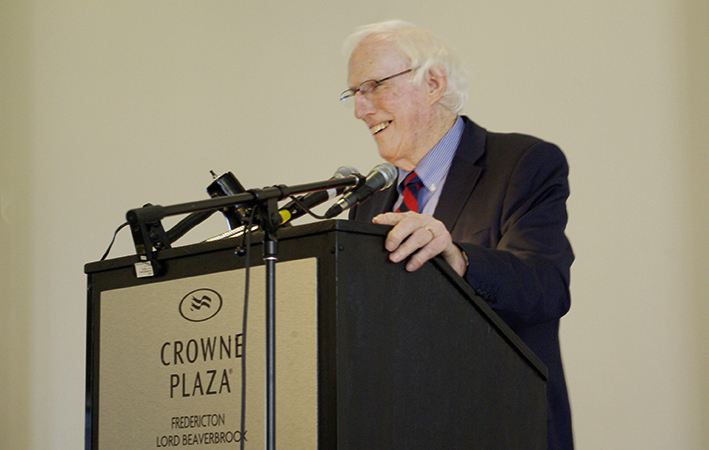 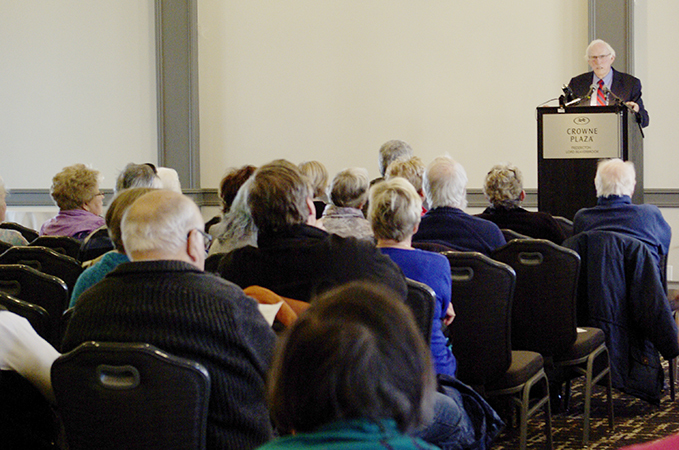 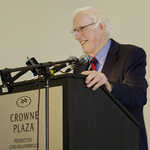 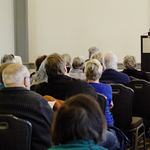 The third and final Lenten Talk of 2019 took place March 25 at the Crowne Plaza in Fredericton. Retired Bishop BIll Hockin always draws a large crowd and this event was no different. The title of the talk was “Getting the Most Out of Church” based on Luke 18:9-14.

As he often does, Bill quoted New York Times columnist David Brooks, who compared the parables of Jesus with the myths of ancient Greece.

“While myths celebrate grandeur, parables puncture pretension,” said Bill, quoting Brooks. “They celebrate humility and service, and this one is certainly puncturing a pretension.”

The parable describes two men in Jerusalem who go to a sacred place to pray — a normal, first century behavior. The first is a Pharisee, a member of a group with whom Jesus was often in conflict.

The second man was a tax collector, despised by the Jewish population.

“He had no credits to come with,” said Bill. “He relies only on God.”

John MacArthur, in his book on parables, gives insight into the two men, which Bill cited. The difference between the two men is quite pronounced.

First, the social status of the Pharisee is rather high. Pharisees were religious and social insiders.

“To have a Pharisee attend your dinner party was a coup, while the tax collector was morally bankrupt and had a reputation for dishonesty,” said Bill.

The second point was the difference in prayer postures. The Pharisee stood upright, which was normal. While it was normal posture, he was in a prominent place where he could be seen. He also prayed aloud for others to hear him, he said.

In today’s terms, the Pharisee would be in the front row, while the tax collector would be “trying to crawl under a kneeler in the back,” said Bill.

As well, the tax collector beat his breast as if in pain, at least spiritual pain.

The third point was the contrast in prayers.

“The Pharisee prayed with himself, to himself rather than to God,” said Bill. “He used the first person pronoun (“I”) five times. And he was specific, as the self-righteous often are.”

The tax collector, on the other hand, addresses God and pleads for mercy.

“Obviously he’s there out of shame,” said Bill. “We can speculate on the mess he’s in. Has his wife left him? Is he out of a job? Is his life in danger? Whatever it is, it drives him to his knees.”

Bill imagined their wives asking how it went when they both got home. The Pharisee’s answer would probably be something like ‘same old thing.’ The tax collector’s wife, though, might say, ‘Wow! Something happened to you. You’ve changed!’

But here comes the challenge for us, said Bill.

“We must recognize ourselves somewhere in the story,” he said. “Either in the two characters or somewhere in between.”

Bill explained that Jesus often used hyperbole — exaggeration — in his teaching, so maybe we think we can’t relate to either of the men.

“But with the Pharisee, we must open the door to the possibility that we carry some of his sins.”

Bill told of a friend of his who went to a Billy Graham crusade and found Jesus. He promptly went home and condemned his church-going parents, saying they were not Christians.

“They were not amused,” said Bill, adding that some Christians are known for their judgmental attitudes.

“Some think they have the moral right to judge,” said Bill, adding that we must always add mercy to our behaviour.

He cited his own example of a friend who was a strong evangelical Christian. When Bill sought his spiritual help in a crisis, “He didn’t judge and question. He was all mercy and compassion. Truth and mercy were embraced in him, and I was the better for it.”

One of the lessons of Bill’s talk was that God can be found in both the ultra-religious and in the mess-ups.

“In times of desperation and moral failure, God is there, though we must ask for it,” he said.

That’s the virtue of humility — we must ask for help, although in our culture, we insist we don’t need help and say we’re OK.

“God says otherwise,” he said. ”Ask for help. Could that be the lesson of the parable?”

Bill recalled that last year after the horrific deadly crash in Humboldt, Sask., former NHLer Sheldon Kennedy, a man who suffered untold abuse at the hands of a coach, spoke these words: “People will be happy again, but it will be difficult. People need to ask for help and stop asking why. When people keep asking why, the hole is harder to get out of.”

Bill cited the hit song from 1972 by Bill Whithers, Lean On Me.

“Whoever else gets the message, God always does,” he said.

Then he quoted Oscar Wilde: “Every saint has a past, and every sinner has a future.”

Bill ended his talk, as he always does, with the Peachtree Benediction: “And now, go in peace, and as you go, please remember that it is by the goodness of God that you were born. And also remember that it is by the grace and mercy of Jesus Christ that you are redeemed, forgiven and set free. As well, remember that none of us leaves this place alone, He goes with us, He promised He would. And while some out there may call us servant, He calls us friend. Therefore, in the strength of that great friendship, we go now from this place to love and to serve, until we meet again.”

Janice Irvine-Meek about 2 years ago

Always wonderful and enlightening. So wish that we lived in Fredericton and could attend Bishop Hockins' talks. Are they available as podcasts?

Richard Walsh about 2 years ago