Let's talk about religion and politics! 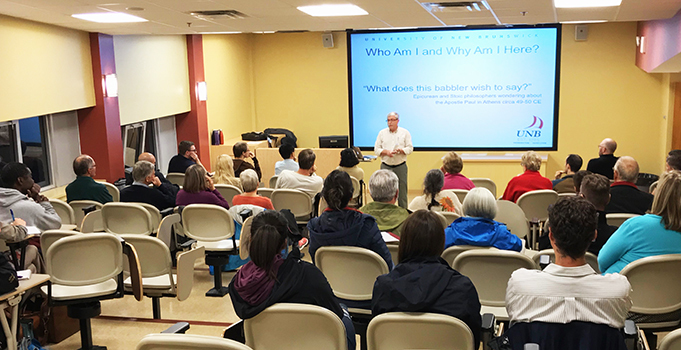 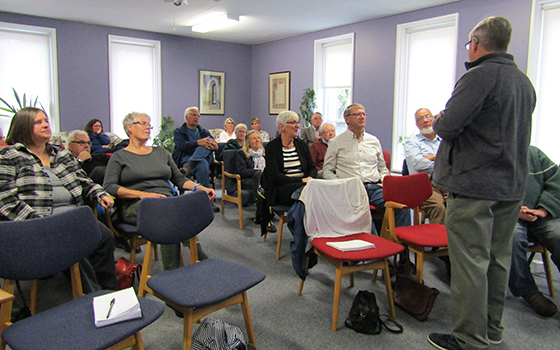 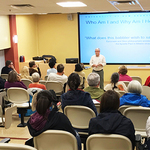 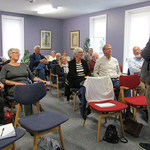 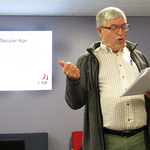 About 35 people came out on Oct. 10 for a noon-hour talk called Having Faith in Citizenship: The Place of Religion in the Public Square.

It was held at Christ Church (Parish) Church, organized by the Mission & Outreach Team of the Anglican Diocese of Fredericton in partnership with the University of New Brunswick’s Faculty of Education.

A second similar presentation was held the evening of Oct. 10 at UNB. Both were given by Dr. Alan Sears, professor of social studies at UNB, and member of Christ Church Cathedral.

Dr. Sears began by saying he is a practicing Christian.

“I mean that in two senses of the word,” he said. “First, I practice the rituals and traditions of the Anglican Church. The other is that I’m not very good at it so I need practice.

“I’m also here because my world is falling apart,” he said, noting the increasing hostility around the world for democracy and Christianity, both of which are pre-Trump phenomenons, he said.

Dr. Sears gave many examples of what he calls the intersection of church and state: the student employment form attestation required by the federal government; religious groups leading the way in sponsoring Syrian refugees; public funding for Catholic schools; the Anglican Church’s apology for its role in residential schools; and just weeks ago, the election in Quebec of a government that wants to ban religious symbols like the hijab from being worn by the civil service.

“We have God in our constitution and in our national anthem,” he said, adding that the separation of church and state was invented by Christians to protect the church from the state.

Years later, “We live in a ‘secular age’ that largely sees religion as an anachronism and/or a problem.”

Thinkers of past decades thought that as we moved toward a secular, modern age, we would give up on religion, he said. The fact that has not quite happened was noted by our own Governor-General, Julie Payette, who, in a speech to scientists Nov. 1, 2017, mocked those who believe in God.

Instead, it appears society has settled for neutrality as the norm, said Dr. Sears, “this idea that secularism is neutral and natural,” though it’s not, he said.

This norm backs up the agenda of Quebec’s new government of seeing no religious symbols in its buildings or on its civil servants.

“It’s no accident that the laws against religious dress in Europe began in France — and continue in Quebec,” said Dr. Sears. “The church had a terrible history and it did in Quebec, too.”

However, excluding symbols is much different than excluding people.

“I would argue that excluding religious people from the public square is unjust,” he said.

He explained that doing such a thing infantilizes the non-religious, “like we’re going to dupe them all.”

Instead of squelching voices, we need people who think differently, he said, quoting Jean Vanier, a Canadian philosopher, founder of L'Arche, and the son of Major-General Georges Vanier, 19th governor general of Canada:

"We need to be vigilant in any situation where it is necessary to obey blindly. Rigidity, a demand for ideological conformity within the group, is rarely necessary; it is not, I think, the sign of a healthy group.”

Dr. Sears encouraged those gathered that the way forward should include civic empathy — finding points of commonality to make connections in the secular world. As an example, he cited the Apostle Paul’s visit to Athens, where he reasoned with people, earned an invitation to speak to those who had much different views, showed respect, and importantly, he studied the culture, with its mythology, poetry and love of art.

“He paid attention to the context,” said Dr. Sears. “He quoted their poets. There was every reason for Paul to be offended and start his sermons by saying, ‘you pagans!’ Athens would have been a shock to a Pharisee like Paul.”

Instead, “He said what he had to say honestly and forthrightly — convincing some, intriguing several, and not swaying others.”

After the lecture, Dr. Sears took questions from the audience. While the noon-hour audience was mainly Christian, Anglican and older, the evening audience at UNB included students, people of faith and people of no faith.

Ministries
Partnerships
Comments for this post are now off.