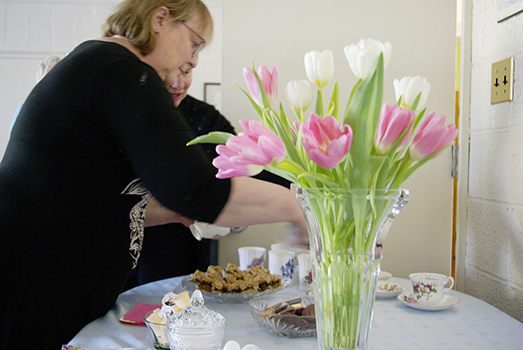 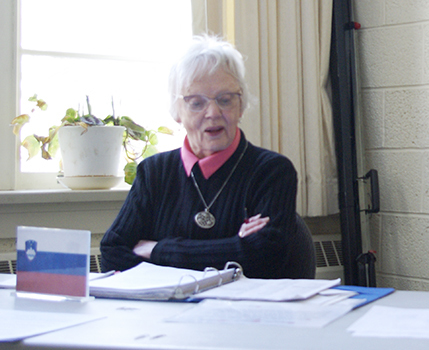 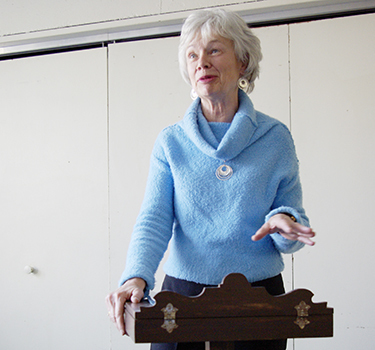 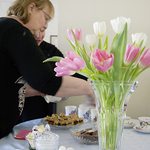 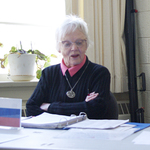 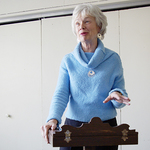 Isabelle Hockin was the guest speaker at Christ Church Cathedral’s ACW annual meeting on Feb. 20. Her talk began after the business meeting that saw a motion from the floor to increase the donation to the Monday morning outreach program from $1,000 to $1,500.

Linda Waugh presented the 2019 budget and Kaye Small gave a report on the previous year’s activities.

Isabelle’s presentation was entitled Learning To Let Go as part of the Lenten journey.

“I grew up in the United Church and we didn’t talk about Lent much,” she said. “But it’s such a beautiful time of the year.”

What do we hold onto that we really should let go of? Sometimes these things — possessions, dreams, plans, hurts — cause immeasurable pain and sorrow, she said.

She gave three illustrations from her own life from the past, present and future.

“I had a dream in the past that I had to let go of,” she said, adding she always wanted a baby.
But by the she met her husband, Bill, she was in her 40s and he already had children. She learned to let go after attending an event where attendees split off into groups of two to discuss regrets.

“I shared my story of never getting to be a mother, and my partner shared that she had married instead of going to medical school,” she said.

The revelations and discussions were a healing balm for Isabelle, and although the regret still came back from time to time, it waned.

She found solace in being a step-mother, “and I’ve had the gift of those two children.”

Her second illustration — the present — outlined her relationship with her brother’s wife, Barb.

“My mother and Barb did not hit it off,” she said. “As time went on, I found myself defending Mom and alienating Barb.”

Once her parents were gone, she sought to build a bridge, but when she asked her brother what she could do to repair the relationship, his quick, decisive answer was, ‘Not a thing!’

“It was too late. It was a hard ‘no.’ I was devastated. Bill talked me down and got me through the night.”

Not long after she received an invitation to her niece’s wedding scheduled for the Labour Day weekend, but she wasn’t sure she should go. Desperate, she wrote Barb a heartfelt letter.

“I apologized for everything,” she said. “I handed it to Bill to mail and he said a little prayer.”

She heard nothing all summer, making her more and more nervous as the wedding day approached. She never got to see Barb the night before the wedding, so the first time the two met was after the ceremony.

“She had her arms wide open,” said Isabelle. “It was a letting go for her to forgive us. It was a new beginning.”

Isabelle’s final example was about her future of aging, health and loss. Her parents did not have ‘good ends,’ she said, with her mother diagnosed with early onset dementia and her father dying of cancer.

“A few years ago, I said to Bill, ‘I really want to go first.’ He looked at me and said, ‘That’s really selfish. Who will take care of me?’”

When she has those middle-of-the-night thoughts and worries that keep her from rest, she has learned to rely on this verse from John 14: Peace I leave with you; my peace I give you. I do not give to you as the world gives. Do not let your hearts be troubled and do not be afraid.

“Sometimes I just say part of it: ‘Do not be fearful. Do not be troubled.’ You really have no control over the future.”

In closing, she told the group she has many blessings. She is a grandmother to two children, and she dropped the ‘step’ title when they were born.

When she turned 60, her family came to celebrate at a surprise birthday party.

“That was the best moment,” she said, adding the family enjoys each other’s company now. “It was Barb who suggested we all go to Newfoundland this year.”

And she’s letting go of fear of the future, taking the advice of author Ann Voskamp from the book One Thousand Gifts: A Dare to Live Fully Right Where You Are, to journal 1,000 things she is thankful for.

“I’ve hit a thousand a couple of times,” she said. “It really does, over time, change your heart.”

After hearing Bishop David Edwards’ New Year’s Day sermon at the Cathedral, “I decided to switch things up. I took that nudge to heart.”

That nudge was to volunteer at Bishop’s Court, the Out of the Cold Shelter.

“It’s quite surreal to walk into a place that used to be your home that’s now a homeless shelter,” she said.

After a few turns helping guests settle in, “I realized I live in a bubble,” she said. “The last time I was on snacks, and that’s where you really get to know them.

“One guy said, ‘this is a lovely home. I hope I can have a home like this someday.’ How gracious. He didn’t say ‘well, this is how the other half lives, huh?’”

She ended with Paul’s words in Philippians 3:12-14, using The Message translation:

I’m not saying that I have this all together, that I have it made. But I am well on my way, reaching out for Christ, who has so wondrously reached out for me. Friends, don’t get me wrong: By no means do I count myself an expert in all of this, but I’ve got my eye on the goal, where God is beckoning us onward — to Jesus. I’m off and running, and I’m not turning back.

Isabelle is a native of Saskatchewan, a retired educator and unofficial book editor for her author husband, retired Bishop Bill Hockin.

Anne Marie LeGrand about 2 years ago

Wish I had been there for the whole talk because what I am reading here is very inspiring. We have an Ecumenical Women's Conference in Baddeck, NS every fall (1st weekend in Nov.) They are always looking for speakers, you would be an excellent speaker.