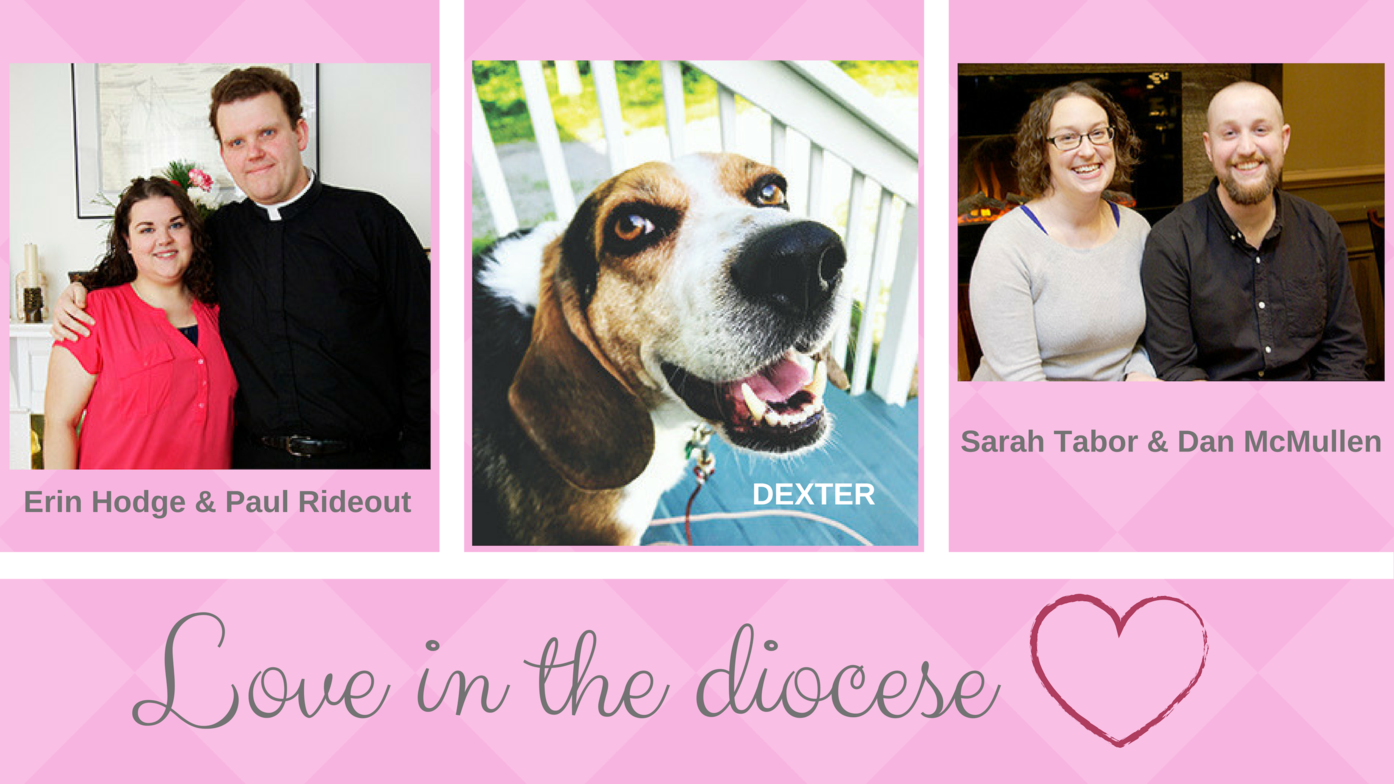 A Leap of Faith

If Father Paul Rideout had a secret weapon for finding love, it would be in the form of a rescued beagle named Dexter.

“The day I ‘knew,’ we took Dexter to get his nails clipped,” said Erin Hodge, Paul’s fiancée. “Paul was holding Dexter and Dexter was losing his mind. I thought, ‘if this man’s heart is so big that he can have such care and compassion for his dog’ — well, that was it.”

But let’s back up a bit. Paul, 33, is from Moreton’s Harbour in northeastern Newfoundland & Labrador. He’s been a priest for eight years.

“What I was looking for was something different, a unique opportunity,” he said. “I’d served in a couple of parishes in Newfoundland & Labrador, and I felt it was time for a change.”

The vacancy for the Parish of Rothesay came across his desk, and he contacted the Ven. Cathy Laskey, who once served in NL. After a period of discernment, and his positive impression of the parish’s commitment to mission and outreach, “I felt like that was where I needed to be. And I don’t regret it for a moment! I’m busier than I’ve ever been — and I served in a three-point parish — but I love it.”

Paul had only just arrived in September 2017 when he asked Erin on a date. It was a walking date in uptown Saint John, where Erin works as co-ordinator of the Inner City Youth Ministry under Threshold Ministries.

One date led to a second and the friendship bloomed into courtship.

“For me it almost seemed natural,” said Paul. “It was so wonderful to meet someone who loved Christ and had a passion for mission. We had so much in common already. This was someone I wanted to continue to know better.

“Seeing the passion she has in her work with the inner city ministry and the relationships she fosters, it showed me her heart. It sealed the deal. I got a glimpse of the beauty of her heart.”

For Erin, 28, Paul looked like good boyfriend material from the start.

“I knew this was serious. He was checking every box,” she said. “One of the things he shared pretty early on was about his grandmother. I don’t think there is much more attractive in a man than his care and attention for his grandmother.

“The obvious care he had for his family and his deep devotion, his faith and spirituality, and his deep understanding of his vocation and calling.”

Though they had talked about marriage, Paul wanted to propose specifically on Nov. 19, 2018.

“I chose the day because it was the anniversary of my priesting and my grandmother’s birthday,” he said.

“He felt it was right to make another vocational decision on that day,” Erin said, adding she knew a proposal was coming, but didn’t know when.

But she was not completely co-operative on Nov. 19. While he had plans to propose to her at the Time Piece art installation outside Market Square, where they had begun their first date 14 months earlier, Erin was oblivious and had a long to-do list that needed attention, including shopping.

“I almost foiled his plans!” she said, adding he did manage to wrangle her back to their special place, where he asked the question and gave her a ring — one chosen based on hints, answers to questions, Pinterest photos and other scraps of information.

The wedding will take place at St. Paul’s in Rothesay on May 25. Erin’s father, Vicars, will officiate, and Bishop David Edwards will celebrate the Eucharist and give a blessing. The Rev. Jasmine Chandra will preach.

“We did a count. I think there are 15 priests invited,” said Erin.

“I’m on board in more of a consulting role,” said Paul of the wedding plans, adding he has booked the venue!

All kidding aside, the two are looking forward to a long and happy married life.

And Erin, as a priest’s daughter, knows what’s she’s in for, “though if you’d asked me a couple of years ago, there was no place in my mind that imagined marrying a priest! I know the challenges first hand. I’m going in with my eyes open.”

“It’s been an affirmation of faith,” said Paul. “I came to New Brunswick not knowing what to expect. It was a leap of faith — not only in my parish but with Erin too. I see God’s hand in it.”

When the Rev. Dan McMullen moved to Apohaqui a couple of years ago, someone in the community asked Sarah Tabor to contact him.

‘You’re really involved with the young people in the Apohaqui-Sussex area. Why don’t you reach out,’ was the request.

She didn’t have any contact information, but that didn’t stop David Tabor, Sarah’s father. One day while Sarah visited her parents, her father disappeared, drove to Dan’s and got his number for his daughter.

“I was mortified!” said Sarah. “I never did contact him!”

Thankfully, Dan officiated at a family wedding that summer, and the two met.

“Before I even got to the wedding, family members were telling me ‘he’d be perfect for you,’” She said. “My family — all of them — were doing it, going up to me and then up to Dan at the wedding.”

She got the courage to introduce herself, under the guise of her involvement with youth ministry, and they exchanged contact information.

“I got her number, but then she went on a missions trip to Guatemala for two weeks,” said Dan. “I never heard from her. I talked to her, got her number and then she left the country!”

But eventually, in September, they met up for a walk to The Bluff in the Sussex Corner area. They talked so much on the iconic peak overlooking Dutch Valley that it was dark when they climbed down. The first date went well enough that they wanted to see each other again.

The second date was an invitation to hang out with Sarah and her friends, not a good sign, according to Dan.

“At first I thought that was probably not great, but I went,” he said. “At the end I asked her to supper. There was a bit more hope after that.”

On Dec. 4 Dan had a lot on his mind. It was the Christmas party at the Apohaqui Recreation Centre and he had big plans.

“I knew at the end [of the night] I was going to ask her if we could be exclusive,” he said. “But one of the ladies beat me to it! She said, ‘is this your girlfriend?’”

From there, the relationship grew, but there was a fear of saying those three words.

“There were a lot of moments when I knew I loved her, but it took me forever to man up and say it,” said Dan. “Before I was brave enough to say it to her, she told me she loved my heart.”

He took it as a good sign. They were camping with her friends in Grand Manan at the time and he was talking about his ministry, which prompted that first declaration of love.

Saying “I love you” was not a phrase Dan took lightly. In fact, despite numerous girlfriends, some long-term, he’d never said it before. It was the first anniversary of their first date that the real words came out.

With love finally declared, Dan moved on to the next step — a proposal — even though he’d known for months he was going to ask.

“It was stressful!” said Dan of trying to choose a ring. He was in close consultation with female friends about how to buy a ring and went to several jewelry stores.

“They asked me about clarity, carats,” he said. “I didn’t know.”

‘I’m just in love!’ he told the salespeople.

Dan’s plan was to propose on Dec. 4, the anniversary of the ‘is this your girlfriend’ comment at the Christmas party, “But I just couldn’t wait.”

So he chose Friday, Nov. 9. Among the things on his mind that afternoon were: ‘Will she say yes? Will I get chased by a bear? Will I get shot?’

He’d arranged for them to take a walk on his future father-in-law’s land in Lower Millstream, but when Sarah showed up, she had orange vests for both of them, it being hunting season, and Dan was dismayed to see there was a lot of evidence of bears.

“I was afraid my plans were dashed,” he said. “We’re going to get mauled by a bear!”

But the bears stayed away, the question was asked and answered, and they happily hurried back to the car.

“I love you so much,” Sarah told Dan as she pulled out onto the road.

“I love you, too, but you might want to drive on the right side of the road,” was his practical reply to his fiancée’s erratic post-proposal driving.

Despite their hesitation along the way, both knew they’d found their perfect match long before they voiced it. Sarah, an occupational therapist in Saint John, works with children and had long ago decided she’d like to adopt a child.

“I see a lot of kids without families,” she said. “I came to the conclusion I’d like to adopt, and he said the same thing. That’s when I really knew.”

“That was a big moment,” said Dan. “I had already thought I’d like to adopt.”

Both families are thrilled for the couple, as is the congregation at the Church of the Ascension in Apohaqui where Dan serves. Many have known Sarah all her life, since she grew up attending Dan’s church. Her parents attend St. Marks in Sussex Corner, and she began attending Atlantic Community Church, across the road from the Apohaqui church, when she was a teenager.

But the whole thing could have come off the rails had they each known a crucial detail about the other — their ages. Sarah is 34, Dan is 27.

“After the first couple of times we hung out, I began to realize she was older than me, so I looked it up. I was afraid she wouldn’t date me. I tried to hide my age,” said Dan.

“I never would have dated him had I known how old he is,” said Sarah.

But by the time they finally talked about it, it was too late. Love had blossomed and age didn’t seem to matter.

The wedding — an Anglican-Baptist ceremony — will take place Aug. 3 at Sarah’s church.

Sharon Guignard over 2 years ago

Congratulations to you both and I know from what I just read God will bless you with a long and wonderful life. Marriage is serious business but my husband Pat and I have been married for 46 years and are more in love than ever. God has been very good to us with 2 grown children, son in Vancouver and daughter in Ottawa. We are both involved in our church and wouldn't change a thing. God bless and a wish for much happiness