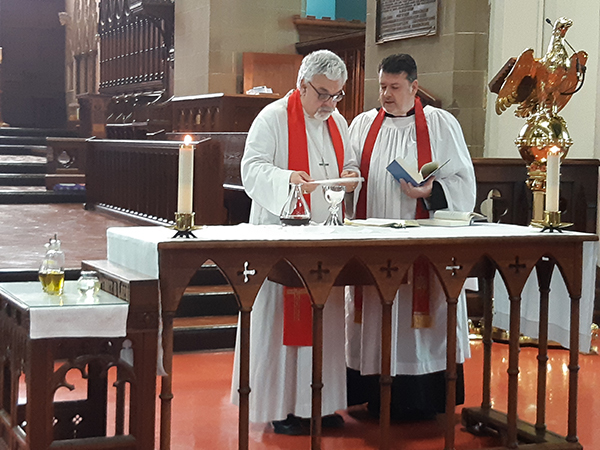 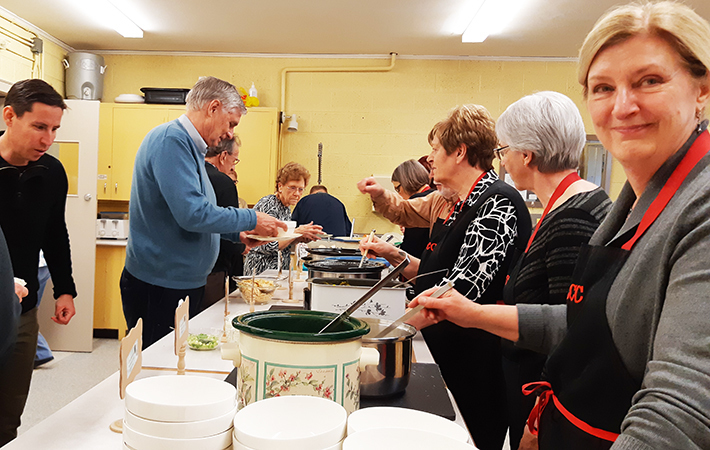 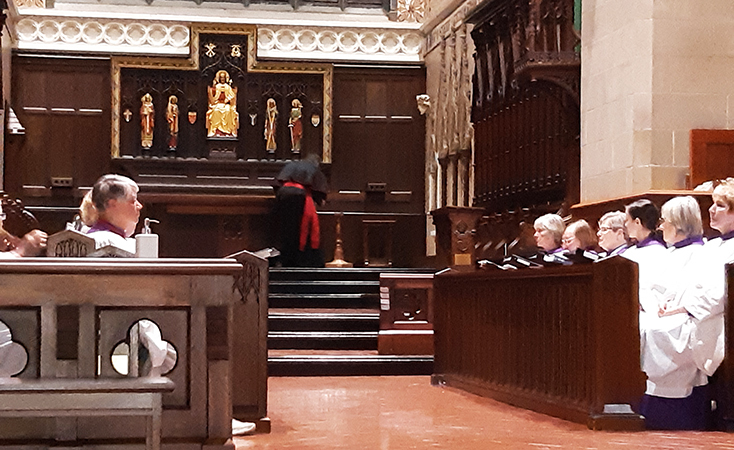 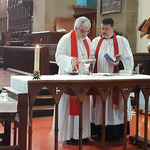 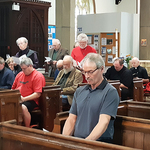 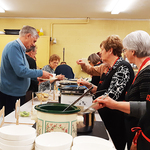 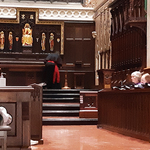 The service was also the blessing of the oils and renewal of ministry for lay leaders, deacons and priests. After the service, the diocese hosted a lunch at Cathedral Memorial Hall, prepared by the Cathedral ACW.

The sermon dealt with the significant event of the Thursday evening before the crucifixion — the Last Supper.

“Today we remember the evening of evenings and move forward into the night of nights,” said Bishop David as he began his sermon. “To put it into modern parlance: the whole Jesus project stands on a knife edge.”

In fact, it could have fallen apart — “the intention of God could die here” — had Jesus insisted that his father take the cup from him. But even before that, he had a gathering with his disciples.

“It is no accident that Jesus chose to bring his earthly work to an end at the Feast of the Passover,” said the bishop. “He could have confronted the religious and political powers at any time or at any of the other great festivals, such as Tabernacles, yet he chooses Passover. Why?”

Jesus “reached back into the history of the Jews” to bring the historic Passover into the present — and for us, the future.

Passover celebrated the escape from slavery, the time in Egypt when the angel of death passed over the homes of God’s people and brought destruction to the first born of Egypt. The Jews were able to escape bondage via the Red Sea, into the wilderness and finally to the Promised Land.

“The Last Supper proclaims escape from slavery too,” said Bishop David. “Every time we break the bread and pour the wine, we are declaring Jesus’ victory over the principalities and powers of this present age which enslave and injure humanity and the whole of creation.”

And it makes no difference whether the breaking and pouring is done in a great cathedral or with a few people in a nursing home, he said.

A call to service is another theme Jesus used at the Last Supper. He tells the disciples to wash each others’ feet, and service is a hallmark of Christianity.

“In our present age we are surrounded by those who are enslaved to evil or who are held down by broken systems,” said the bishop. “Those addicted to alcohol, drugs, or pornography. The widow, the orphan, the refugee, the child living below the poverty line, the person so trapped by work that their family is being torn apart, the lonely, the social structures which imprison people, the abused.

“To people in those situations, it does not feel as if evil has been defeated… Today as we gather to recall that radical evening in an upper room and also to be reminded of our calling as ministers of the Gospel, let us reflect upon how we and the whole church are called to be the image of God in the mission of God.”

During the celebration of the Eucharist, the bishop was assisted by the Very Rev. Geoffrey Hall and the Rev. Debbie Edmondson.

The observance of Maundy Thursday continued with a simple supper of soup and some quiet fellowship at Cathedral Memorial Hall. Following supper, parishioners gathered at the Cathedral for the evening service.

The scripture from John 13 described the foot washing at the Last Supper and Peter’s loud exhortation that Jesus “will never wash my feet.” Dean Geoffrey Hall spoke on the passage, particularly the meal Jesus and his disciples shared the night before the crucifixion.

“Leave it to Jesus — worker of miracles, rabbi, master teacher, Son of God, Son of man. He took a loaf of bread and a cup and said, ‘Do this in remembrance of me.’

“A simple act, a meal, intended to be a sign of all he is — into the trenches of war, our homes, hospitals and nursing homes, to church picnics, with missionaries in places far off and near and in worship spaces all over the world.”

Next to water, bread and wine are the staples of basic human sustenance, he said.

“On this night, Jesus fully intended this sign would last forever — ‘do this in remembrance of me.’”

It is tragically ironic that at that table, united with one another in anticipation with their Lord, the body is broken by deceit. That brokenness is what St. Paul addressed in his letter to the Corinthians: a long list of divisions in the church. The community was broken — “a harbinger of what lay ahead for the larger Christian church that lasts today,” said Geoffrey.

The body of Christ is a broken body, and it began well before Paul said it. In fact, it began on this very night at the table in the upper room.

They gathered at the invitation of Jesus. Anticipation and fear filled the air. Simply being in his company put them in danger, but they came, perhaps hoping for some news.

But no, it was a simple meal, a foot washing.

“If they didn’t know it before, they knew it now,” said Geoffrey. “There was trouble in the air.”

Then Peter tries to take servanthood and turn it on its head, he said. Only hours later he would deny Jesus three times.

This night is not special for the impending doom of the next day, said Geoffrey. Its most important words are, “do this in remembrance of me” — to the broken people, to the broken church. The church remains broken and divided, “one holy and apostolic church,” yet we live otherwise.

“Let us pray for the church, pray for ourselves and press on, even in spite of ourselves,” he said, in conclusion.

After Holy Communion, volunteers got to work quickly. As passages from the Psalms and Matthew were read, they removed all ornamentation from the sanctuary — all candles and candlesticks, cushions, linens, hangings, vessels and crosses — carrying them to the sacristy.

When every adornment had been removed and the altar was laid bare, Geoffrey loudly closed a large bible and the lights were extinguished. The congregation left the darkened church in silence.