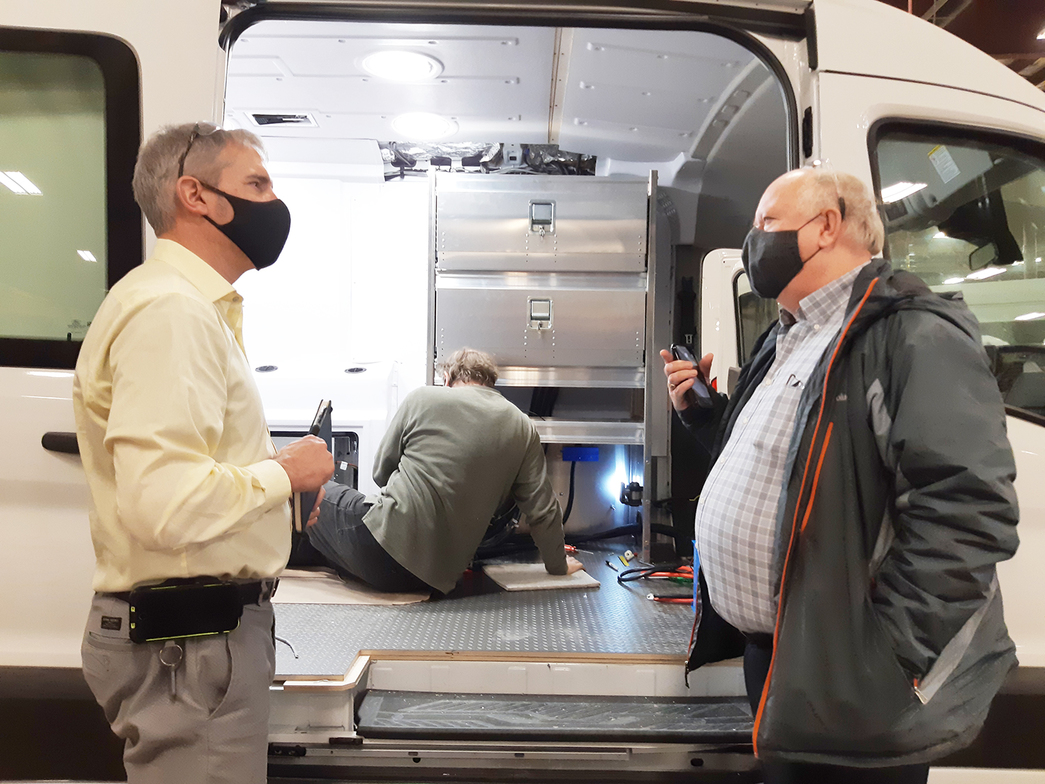 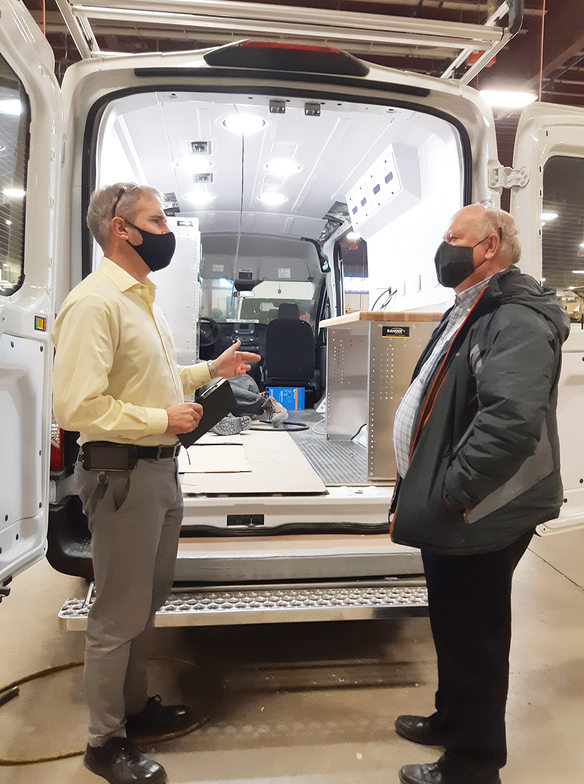 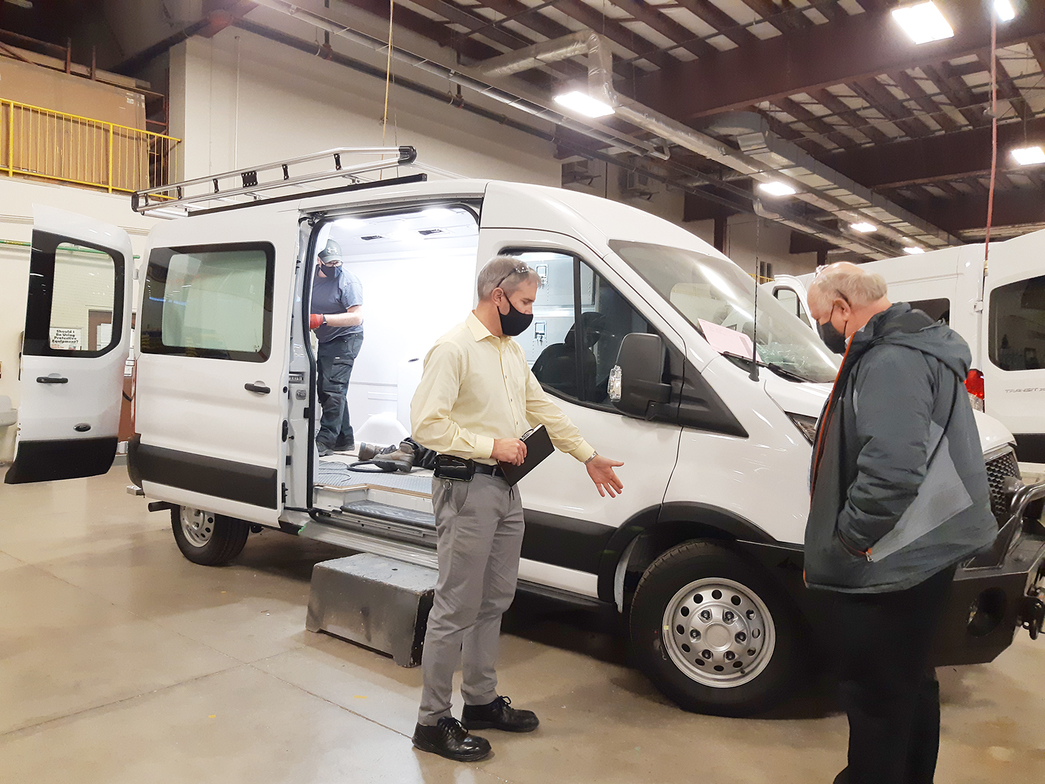 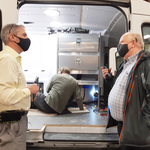 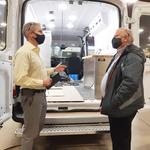 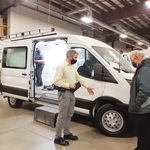 Editor’s note:  On Dec. 14, Companion Diocese Committee chair Robbie Griffin and New Brunswick Anglican editor Gisele McKnight visited Malley Industries in Dieppe to check on the equipping of the mobile medical clinic for the Diocese of Ho in Ghana, West Africa. This is an account of that visit.

David Pargiter, director of sales, was our tour guide for a walk around the production floor of Malley Industries. This 92,000 square foot facility, just up the road from the Moncton International Airport, employs about 50 people, 35 of whom work on the floor.

This plant is not an assembly line in the high-tech, mechanized way you might imagine. It’s a very hands-on, labour-intensive process to build an ambulance, or in our case, a mobile medical clinic.

“We have to know the end use of a vehicle, then we’ll figure it out,” said David, in explaining the various vehicles they build and customize. “We draw on the projects we’ve already done and bring it all together.”

We began with the electrical department. The electrical panels are built here, then installed later, so as not to crowd the interior of the vans with too many tradespeople during the process.

We were shown the metal fabrication section and the paint booths. Then we arrived at the plastics department, which uses a vacuum-forming process to transform a large, flat, plastic sheet into a custom-designed liner for a vehicle.

These liners form the basic interior of an ambulance or other vehicle, to which all manner of things are attached: shelves, storage compartments, tables, seats, stretcher and refrigerator, depending on the use.

Malley also sells these van liners separately, which are often used in work vans, delivery trucks and so on.

After the plastics department visit, we were shown our mobile medical clinic, about 65 per cent complete. During our time there, workmen came and went as they installed the components of the van.

The plastic liner was in place, as were a heating and cooling system and a work table where lab tests will take place.

Outside the vehicle, awaiting installation, were a small refrigerator for medicines and a stretcher. The van has UK electrical system, which is used in Ghana.

The front of the AWD van sports a winch, which will be used often to pull itself out of ruts and muddy roads, said Robbie, who has twice visited Ghana as part of this project. This van, treating people in the far reaches of the diocese, will be travelling roads that are not maintained, he said.

In any vehicle, the very nature of travel means everything is trying to loosen itself. That process will be much more pronounced on the roads of Ghana, but all that has been taken into account, said David.

“What we’ve done with your van is put aluminum bracing in it,” said David. “It’s light and rugged. Everything about this van is heavy duty.”

The ladder and roof rack have been installed, which will hold jerry cans and tents. The tents will serve as patient consultation and operating rooms.

With this unusual project, David has been involved in all aspects of the build. A lot of research and fine-tuning have gone into making sure this van will work as expected in Ghana.

David hopes the product will be finished by the end of the year, and a blessing ceremony, with Archbishop David Edwards, is planned for early January. Then the van will be sent to Halifax for shipping to Ghana.

But before it leaves the shop floor, the van will be stuffed with a whole host of medical equipment from Malley.

“We’re going to fill this vehicle with what we’re donating,” said David.

Considering that Malley is only getting a trickle of chassis from Canada and none from the U.S. due to supply chain issues, this project might not even have begun. The company had previously ordered 73 chassis, and this fall, only two arrived, one of which was the mobile medical clinic.

“We won’t see any probably for six months,” said David.

As archbishop David previously said, this timing shows the hand of God at work, making sure this project would come to fruition much earlier than it might have.

Robbie, who has used his contacts at Rotary, all the way to the international level, to help fund the project, was happy to see it all coming together.

“I’m extremely pleased,” he said to David at Malley. “I think we communicated what we wanted and you’re building it.”

THE PROJECT
The notion of a mobile medical clinic first surfaced in 2010 when Bishop Matthias explained the need for basic medical care for the people in his large, rural diocese. There is no health care for the majority of people.

The vision was for a health care vehicle that would travel from community to community, performing examinations, tests and minor surgeries, dispensing advice and medications.

That dream was revived in 2019 when Robbie visited the diocese on a fact-finding mission, and further cemented in early 2020 with another, more intense visit and the forming of partnerships with Rotary in Ho and the Ho Teaching Hospital.

The hospital will maintain, operate and staff the van. It will also provide a second vehicle, carrying staff and a pastoral priest, to accompany the van on its runs. Because it’s a teaching hospital, many staff will be training for practise in rural medicine.

The cost of the project is huge. The van, its refurbishment at Malley, medical equipment and supplies, technology and communications programs, spare parts, pharmaceuticals, training and shipping will cost about $270,000 CDN.

Many parishes, groups and individuals, plus the diocese, have contributed to the fundraising, as have private donors and several branches of Rotary.

If all goes according to plan, the van will dock in Ghana in early spring, and Archbishop David and Robbie plan to be there, if possible, to celebrate its arrival. Then the van will be put into use, providing basic health care to villagers in the Volta and Oti regions for years to come.

About Malley Industries, adapted from its website
Malley Industries in Dieppe has its roots in the 1960s, and began as a backyard, part-time family business, building truck caps and campers and converting vans to recreational vehicles.

The company has grown into the manufacture of ambulances, emergency vehicles and accessible vehicles. One branch of the company manufactures plastic liners for emergency and other vehicles.

Its ambulances are sold in New Brunswick, Nova Scotia, Newfoundland & Labrador, Quebec, Manitoba, British Columbia and throughout the U.S.

Photo Captions:
Malley’s director of sales David Pargiter, and Companion Diocese chair Robbie Griffin, inspect and discuss the various aspects of the mobile medical clinic which is being equipped at Malley Industries in Dieppe. The van is almost ready to be driven to Halifax, put in a container, and shipped across the Atlantic to Ghana in West Africa.
McKnight photos