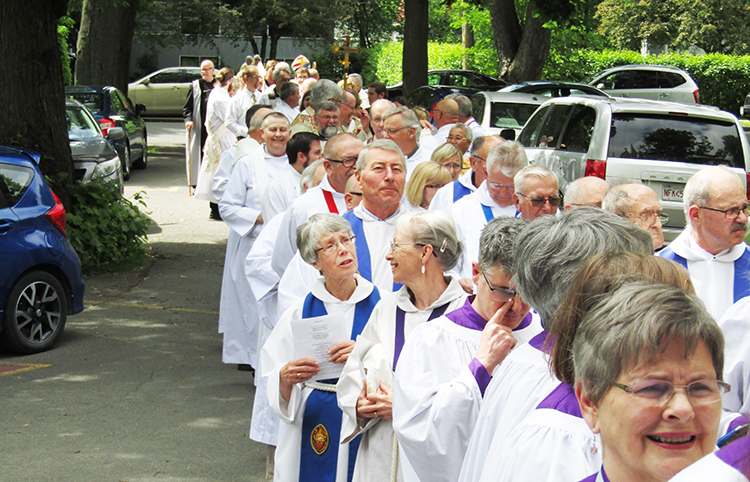 The New Brunswick Anglican begins a new journey this fall. Each month until we run out of stories, the paper will feature a member of the Anglican Diocese of Fredericton whose roots are far from New Brunswick. This feature series is called My Journey Here. This week in eNews, you have sneak peek of the story earmarked for the September edition.
If you are, or know of a parishioner who is from away and would like to tell the story of ‘how I got here,’ send the name and contact information to the editor: gmcknight@diofton.ca or 506-459-1801, ext. 1009.

For Cindy Derksen, 74, vestry clerk, layreader and member of the Parish of Richmond, it was a cruise that changed the direction of her life.

Cindy was born in Rhode Island and worked for a New England dairy called HP Hood & Sons. Over time that job led her to live in New Hampshire. It was in the spring of 1972 that Cindy took a cruise. Dennis Derksen, from the tiny town of Langham, Sask., was on that cruise.

A few months later, the two were married, and Dennis moved to New Hampshire. It turns out they both had similar cross-border roots. Minnesota had been home to Dennis’s grandparents before they moved to Saskatchewan around 1905. And Cindy’s grandmother was born in Nova Scotia. Her father bought a cottage there when Cindy was a child and she remembers many summers spent there.

The two lived in an apartment for almost a decade. They wanted to buy a house, but realized their savings would be better spent on real estate in Canada. One weekend they drove up I-95 to Houlton, Maine, crossed over, stopped in Woodstock and bought a copy of The Bugle, the local paper.

“There was an ad in the paper for a house — our house,” said Cindy, adding it was rustic and private and overlooked the St. John River.

In addition to the favourable U.S. exchange, the couple noted the beautiful farms, the friendliness of the people and the fact that with six or seven churches in the area, it was clearly a community of faith.

“We looked at the house in May 1981 and moved in November,” she said, adding they had the house paid for within six months.

LIFE IN NB
Now that they were living in Canada, Cindy needed to find a new job. She’d worked at the dairy for 14 years, so she had lots of experience, but in subsequent interviews, employers felt a new arrival might not stay for long.

That was the last thing on Cindy’s mind. She loved the St. John River Valley, its peace, its farms, but she couldn’t seem to connect with employers.

Not long after, she needed to photocopy a document, and her husband suggested Craig Manufacturing. He knew they had a photocopier — and he suggested she apply for a job there while she was at it. She got her photocopying done, and within a month, she was working there.

“I worked there 29 years,” she said. “I’ve been an accounting clerk my whole life.”

LIFE IN THE CHURCH
Cindy described Dennis and herself as having “a bit of faith” in the early days.

“I’d left faith behind, as many do. I was a Methodist. I went to a Lutheran Christian school. Dennis was a Mennonite,” she said.

But they weren’t active.

In the meantime, Cindy’s mother bought a house in Hartland to be closer to them. It wasn’t long afterwards that her mom, a Congregationalist, began seeking out a church, and she felt Holy Trinity Anglican was close enough — in location and practise.

“She found out when the services were, and I asked her, ‘would you like me to go with you?’”
So the two began attending in 1991.

“She’s the one who sought the church out. It’s been a blessing to me. It’s my family,” said Cindy.

LIFE WITH A SECRET
When Cindy was 17, she gave birth to a son, whom she placed for adoption.

“I wasn’t forced, but I knew I had no other option,” she said. “A marriage would not have worked.”

Her family was heartbroken, as was she, but no one mentioned it — ever.

“That had an impact on me. It was so shameful,” she said. “My soul was just ripped open, but I never talked about it.”

But times change and having a baby while single isn’t the stigma it once was.

“I decided I’d punished myself long enough,” she said.

It was 1994, her son’s 30th birthday, when Cindy made the application to find him. She applied to a particular agency because it was the only one she knew of. He had applied to the same one because it was free — two years before.

They met Gene in Orono, Maine, near where he lives.

“It’s an adult relationship,” said Cindy. “I talk to him every week. I don’t consider myself a mother, but he tells me, no, you are a mother.

“We go to the cottage [in Nova Scotia],” she said. “He and his wife work on the cottage. [That he is in Maine] “is in itself a miracle. He’s two-and-a-half hours down the road from me.”

She and Dennis met Gene for the first time on a Sunday. It was one of the most important days of her life. But how do you go to work on Monday, remain quiet and act like nothing’s happened?

On that Monday evening, she had a vestry meeting.

“Bill Morton was the priest,” she said. “I kept thinking I wanted to talk to him, but maybe no, I can’t talk to him about this. Then, of all the people there, Bill said, ‘Cindy, would you drive me home?’”

God had given her the opportunity, so she took it. When they arrived at his house, she asked if she could come in to talk.

“It gave me a chance to talk it out,” she said. “I’d never talked about it before.”

She gave Bill permission to include his wife, Eva, and the two sat and listened to Cindy’s 30-year-old secret.

Now the story of Gene is an open part of her life, not the heart-wrenching, guilt-inducing secret she’d kept for so long. Gene has been back in her life for 26 years.

“God is a God of second chances,” she said.

LIFE’S JOURNEY
Dennis died in 2012. His obituary listed Gene as his son — a testament to his generous, inclusive spirit.

Cindy hopes she can stay in her home for as long as possible. Gene asked if she would move back to the U.S. But the answer was no.

“It’s not about me. It’s about where God has pushed, pulled and led me. I’ve found peace here,” she said. “I see God in nature and I see him here.”

She couldn’t bear to leave her church family, she said. Now that she’s found her way to New Brunswick, to her son, to the Parish of Richmond, and back to God, she feels her journey is complete.

Dianne Phillips about 2 years ago

Hi Cindy! What a beautiful story of God’s leading and healing. Thank you for sharing!

Cheryl Jacobs about 2 years ago

Thanks for sharing, Cindy! I have long appreciated your presence in this diocese and with the NB Christian Ashram. And I think about our group that meets for the evening litany - and now realize this important long-time connection between you and Eva!

Robert Taylor about 2 years ago

A heartwarming story. I guess I won't be featured in this series -- I just moved out of my parents' homestead in East Riverside-Kingshurst last fall!!

Bonnie Greenwood about 2 years ago

Tina Biggs Walker about 2 years ago

Hi Cindy, Tina from PCDS here. Lorraine sent me this link. What a wonderful story and so beautifully told. I remember sitting next to you in Mr. Green’s class. And here you are telling the story of a life well lived. Congratulations on this important and poignant article.

Nancy Robinson about 2 years ago

Thank you for sharing your faith journey, Cindy. It's heart warming to learn how God has blessed you throughout your life. You are a faithful servant.

Elaine Robichaud about 2 years ago

Cindy, Your journey is an example of God's perfect plan. I pray that we all can have the faith to know that our journey is perfect too. Thank you for being a friend in prayer and sister in MU.

Betty Lou Craig about 2 years ago

How beautiful it is to read how God is working our lives out even if we do not realize it. Cindy is an important part of our Hartland Community so I am glad that she wants to stay. I am even more glad because she is my friend who is always inspiring. May God continue to bless her.

Jocelyn Green about 2 years ago

Thank you for sharing your beautiful story...so encouraging to see how the Lord worked in your life..leading and guiding you to His wonderful blessings He had in store for you...Lord bless......

Kathleen Snow about 2 years ago

Dear Cindy, what a journey you have had. And God has blessed you abundantly, just as you bless others in your daily life. A wonderful story of witness.

Sharon GUIGNARD about 2 years ago

Such a wonderful story of how God works in peoples lives. It is amazing to see how you went from your early home in the States to NB and then found your church, your son and were led to God's abundant love through your pastor and acceptance by your church family. God is so awesome and now you are sharing this story with God's love. Thank you and may this be an inspiration to others to never be afraid to talk to God about anything. He loves us no matter what.

Joanne Fitzpatrick about 2 years ago

Each of us has a story and it is so important to share our stories so that we can see how God has a plan for us all. Your story is amazing......Thank you for sharing it!