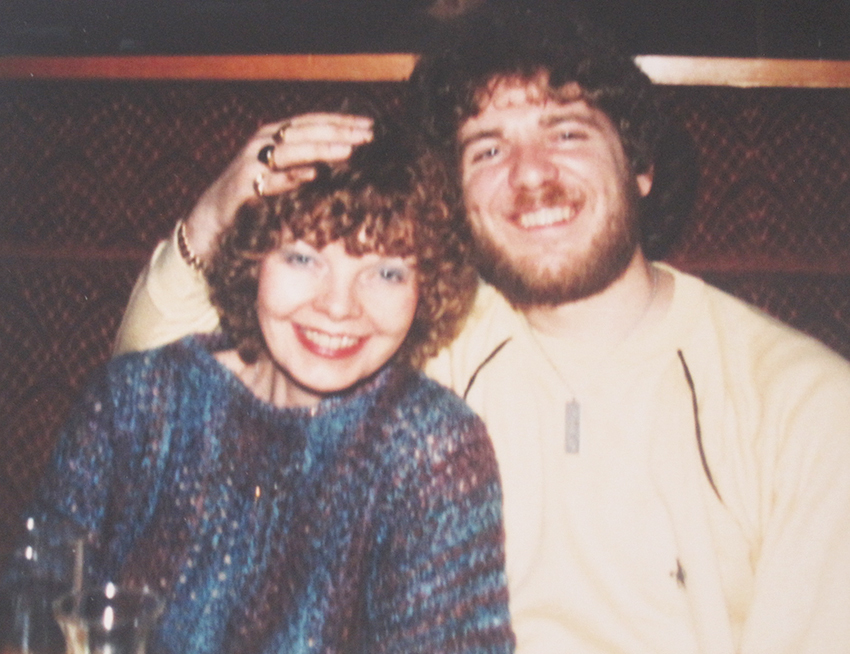 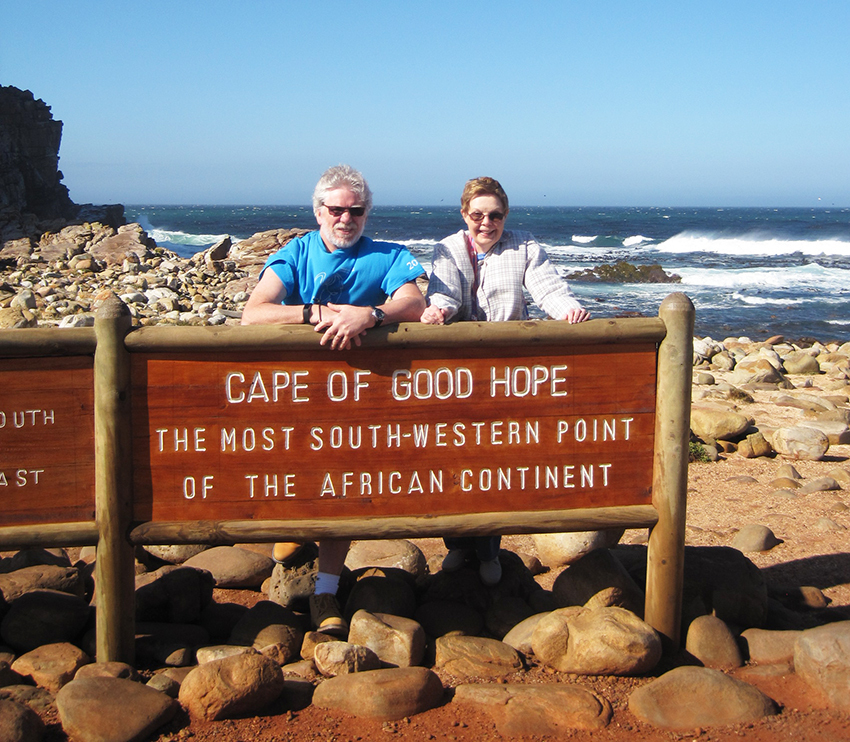 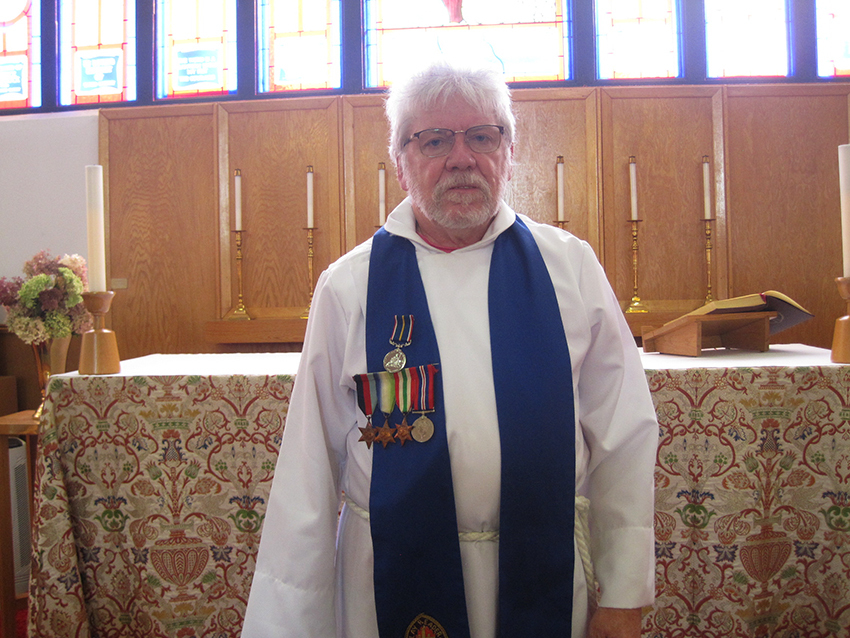 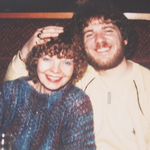 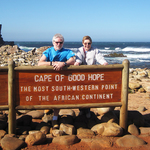 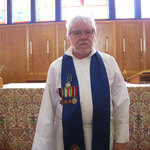 Mike Briggs, stewardship officer for the diocese, had something of an idyllic childhood — weekends spent on the beaches near his home on the Channel Island of Jersey, and sometimes, visits to see his father at work, which was on British Petroleum oil tankers that sailed around the world.

“I have stamps from letters he sent from all over the world,” said Mike.

Mike was 11 when he and his family moved from England to Jersey.

“Dad was fed up paying English taxes,” he said, adding the move was a good one for the family. “I spent a lot of time surfing!”

Mike always went to Sunday school with his four siblings, but with his father away much of the time, and his mother raising five kids almost by herself, the importance of church-going began to slip away.

“We’d go for hatches, matches and dispatches,” he said. “I don’t think I’m that different in that respect.”

Such was his relationship with God, which got a lot worse before it got better.

ADULTHOOD
Mike left school and went straight into banking, which is the major industry on the island. He had been married to Linda five years when he came home from work one day and found her dead at the bottom of the stairs, her neck broken, a basket of laundry strewn about.

“At that point I was really pissed off with God, which was mostly what kept me away from church,” he said. “It was only later that I realized God had a plan for me and this was part of it. It was sad, but it was her time. I didn’t realize it then.”

He continued to work and build up vacation time, which he never took, until a few years later, when he went to South Africa to visit a cousin. Then in the spring of 1982, having never been to the Caribbean, he booked himself a trip, which turned out to be a life-changing event.

A NEW LIFE
“I met two Canadian ladies,” he said. “One is a retired senator, the other is my wife of 37 years, Judy.”

When he got home, there was a letter from Judy.

“We just started writing,” he said, adding he still had a lot of vacation time to use up, so that fall he visited Judy in Toronto.

They took the train to Montreal, and he was enchanted with the country and with Judy.

“I really liked [Canada], and things progressed,” he said, adding they soon came the realization that one of them had to move.

Judy, a registered nurse, visited Jersey the next spring, and investigated the job market there. Then in August, Mike flew to Moncton to attend Judy’s sister’s wedding at St. Philip’s Anglican Church.

By December 1983, they’d decided on a spring wedding in Moncton. They planned to live in Toronto, where it would be easy enough for Mike to get a banking job.

The wedding was in April, a necessity because Mike’s parents, Denis and Shirley, owned a hotel, and in order for them to attend, it had to be before the tourist season.

TORONTO LIFE
In Toronto Mike found a job at Scotiabank. They lived in a high-rise, which was all new.

“Coming from an island that’s nine miles by five miles, to the largest city in Canada — culture shock is putting it mildly!”

They bought a house, and Mike went through a few career changes, from banking to insurance, then an intensive IT course. His new job as head of IT for a trucking company kept him on the road so much that the gate crew for the 6:30 a.m. flight to Montreal knew him by name.

But after awhile, big city life started to wear thin for both Mike and Judy. Her shift work and his travelling left the couple with one main form of communication — notes on the fridge.

Judy was from New Brunswick, and all her family was there, which began to look rather attractive.

“We always knew we’d end up in Moncton,” he said.

Judy took a retirement package, they left the crowds, the traffic and the noise behind for two acres on the outskirts of Moncton.

BACK TO CHURCH — IN MONCTON
The couple bought a Wine Kitz franchise and business was good. By 2010 it was the third highest grossing franchise in the country.

All that business meant a lot of administration, and Mike found the perfect time to do it — Sunday mornings.

“Judy started going back to St. Philip’s, her childhood church,” he said. “I’d drop her at church and go do all my paperwork at the store.”

Two things happened to allow God’s plan for Mike to fall into place. First, the business was thriving, which meant he was able to hire some people, which lessened his load.

Second, they attended a family wedding, whereupon a three-year-old bumped into Judy on the dance floor, knocking her down.

The resulting broken wrist was a complicated fracture, and it eventually had to be rebroken. But all that meant Judy, a choir member, could not hold her hymnal during worship services.

“I told her, ‘I’ll go and hold your hymnal.’ That’s how I got back to church,” said Mike. “It was the kick from God that I needed, though it meant Judy breaking her wrist.”

Sensing an opportunity, the Rev. Keith Borthwick mentioned the need for layreaders. Mike offered and found himself reading the next week.

RETIREMENT
Since then, they sold the business, and Mike has become more involved in St. Philip’s, serving as parish treasurer, administrator and choir member. Both attend the annual Diocesan Choir School.
He’s a diocesan layreader, was a member of the diocesan finance committee, and ultimately became diocesan stewardship officer.

Since the pandemic hit, he’s become active in food security issues in Moncton.

As much as he loves to go home, Moncton suits Mike just fine. It’s close to the ocean, which he sorely missed in Toronto. He’s familiar with the Fundy tides, the highest in the world, because Jersey claims second place in that category.

“Alma reminds me so much of Jersey,” he said.

After being married for 37 years, Mike says he can still surprise Judy from time to time.

“In 2009 we celebrated our silver anniversary and renewed our vows at St. Philip where we were married,” he said. “I had one of my nephews set up to pipe us into the church. Judy was totally gobsmacked when she saw Stephen in his kilt and with his bagpipes.”

For Judy's recent 70th birthday, while Mike and Judy were at church, her family was hiding at their house. She walked in to quite a surprise.

Before the pandemic, Mike and Judy were avid travellers and hope to be again.

“There is so much world out there,” said Mike. “We love to travel. We don’t have any kids. It’s our one indulgence.”

Mike's father, Denis, was a submariner in the Second World War. Mike and Judy have plans to visit Jersey before the end of the year, returning Denis’s war medals to Jersey and gifting them to Mike’s brother, who will pass them on to Mike’s nephew.

“My brother will look after them,” he said. “He’ll make sure Charlie understands what they mean.”

• They are part of the British Commonwealth but not part of the United Kingdom nor are they British Overseas Territories (like Bermuda, the Cayman Islands and the Falkland Islands).

• Internationally, the dependencies are considered "territories for which the United Kingdom is responsible," rather than sovereign states. Jersey is a self-governing, parliamentary democracy under a constitutional monarchy, with its own financial, legal and judicial systems, and a Lieutenant Governor who represents the Queen. The UK is constitutionally responsible for the defence of Jersey.

• While it’s not part of the UK, there is plenty of evidence of British influence: a common language, currency, and school curriculum. Islanders read British newspapers and watch British television programs, drive on the left and follow British sports. However, the island also has a strong Norman-French culture, such as its ancient Norman language Jèrriais and place names with French or Norman origins.

• Jersey has a population of about 108,000. It is 45.6 square miles in size, roughly nine miles by five miles. The Atlantic Ocean has great influence over the island’s weather, giving it mild winters and warm summers.

• Jersey is considered a tax haven. Its economy is led by banking and finance, followed by tourism, fishing and agriculture.

• Jersey was occupied by the Nazis from May 1940 to May 1945. After D-Day, the German supply lines were disrupted and the island faced starvation. A Swedish ship called the Vega, chartered by the International Red Cross, arrived on New Year’s Eve 1944 with food parcels and supplies sent from Canada. It made six more visits until liberation in May.

• The name Vega is still said with great reverence in Jersey, and Canada’s role is widely acknowledged in saving the island from starvation.

PHOTO CAPTIONS
Judy and Mike while dating, 1983.
Mike and Judy during a trip to South Africa in May 2017.
Mike wearing his father's medals in front of the altar at St Philip, 2021.

This story is part of a series where we feature a member of the Anglican Diocese of Fredericton whose roots are far from New Brunswick. If you are, or know of a parishioner who is from away and would like to tell the story of ‘how I got here,’ send the name and contact information to the editor:
gmcknight@diofton.ca   or 506-459-1801, ext. 1009.

beautiful story- God's leading every step of the way!..Cindy