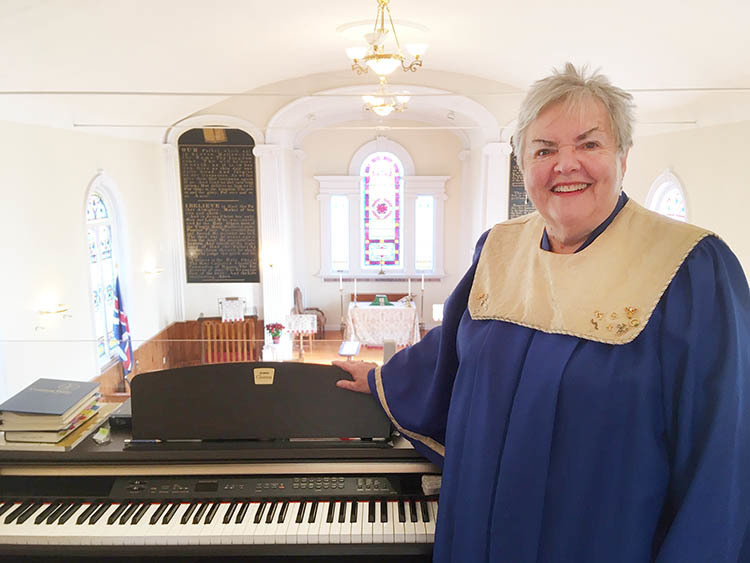 Heather Hynds and her husband, Fred, left Northern Ireland a year before The Troubles began. Looking back, they realize they left just in time.

“Things were not good there,” said Heather of the conflict. “That went on and got worse.”

“The Troubles” is the Irish name for a low-level civil war, pitting Protestants against Catholics, that went on for 30 years — from 1968 to 1998.

In Coleraine, County Londonderry in Northern Ireland, where they grew up, 13 people in total were killed during The Troubles, including several in two car bombings. Two of the 13 victims were civilians with no paramilitary connections.

“We went back for holidays, but it was not the environment we felt we wanted to raise children in, plus we loved Canada.”

ARRIVAL IN CANADA
Heather and Fred now live in Quispamsis. Heather attends St. Luke’s in Gondola Point and is or has been a member of the choir, ACW, and Altar Guild. She is also a layreader.

The ties to Anglicanism began at birth for Heather. She attended Killowen Parish Church in Coleraine, sang in the choir, taught Sunday school and got married there.

“We left Ireland a couple of weeks after we got married,” she said. “We decided before we settled down to see the world. Growing up in a small town in a small country — there’s a lot of world out there!”

They thought about Australia, but in the end, the fact that Fred had a brother living in Toronto made the move to Canada an easier decision.

At the time, the Canadian government was offering a program of ‘assisted passage’ for £10. Once there, you were expected to get a job and pay back the fare monthly, but it was a great incentive to come to Canada.
The couple decided to make the voyage by ship — when else would they have to opportunity to sail the Atlantic? It took six days.

They arrive in Montreal in late June 1967 to much fanfare. Expo ’67, the World’s Fair, was in full swing, not that Heather and Fred knew that. They were impressed by the crowds and the celebratory atmosphere, not realizing it was not the norm!

They took the train to Toronto, and Fred’s brother, Noel, met them at Union Station.

“The next day, I went to an employment agency. I started work the next week. I really was fresh off the boat!” said Heather.

A week or two later, Fred began a job at the University of Toronto. He worked in administration in the Physics Department, managing the labs, for the rest of his career.

The couple initially lived in downtown Toronto, but eventually moved to Scarborough, where their daughter was born in 1975 and their son in 1979. Heather attended the Anglican Church of St. Paul, L’Amoreaux, where she sang in the choir, joined the vestry and ACW, and became a warden.

“I made a lot of friends there,” she said.

With both of them retired by 2005, they thought about moving to a quieter place.

“We had friends we’d met at our very first apartment in Toronto who had subsequently moved to New Brunswick. We’d come and visit every so often.”

During one of their visits to the province, they saw a new housing development and marveled at the much cheaper prices.

‘Should we?’ they asked themselves and their two grown children. The answer was to go for it.

“So we moved to New Brunswick and loved it,” she said.

AT HOME IN NB
They built a new home in Quispamsis, not far from their Toronto friends. Heather discovered the builder’s wife, Heather Hart, attended St. Luke’s, and she invited Heather to choir practice. That was all it took.

“It was such a pretty church. Everyone was so friendly. I’ve always felt quite comfortable there.
“I remember the first Sunday I went to St. Luke’s. One lady and I got chatting and she invited me to get together for coffee.

“The church really helped me settle in here. I even learned to stitch a quilt,” she said, adding that sitting around, talking and quilting with the ACW gave her an excellent history of the area she never would have gotten otherwise.

One of perks of being in the choir has been attending the annual Diocesan Choir School, which, for the past number of years, has been held in nearby Rothesay.

“A group of us has been going for several years,” she said. “It’s great that a small church and a small choir have the opportunity to work with clinicians. It’s amazing what you can learn over a weekend!”

One year, Heather even brought her sister, who was visiting from Northern Ireland, to Choir School.

GROWING UP IN NORTHERN IRELAND
Visiting back and forth is the norm for Heather, Fred and their families. It’s much easier now that they’re retired and their home country is once again at peace.

“It was very troubling to see Northern Ireland that way,” she said. “We’d occasionally hear of some little thing happening at the border, but never anything that affected our lives.

Growing up, they were always aware of the differences between Catholics and Protestants, but the country was highly segregated, with their lives revolving around their churches and their schools. There was little opportunity to make friends and it wasn’t until Heather went to college that she mixed with Catholics.

The Ireland she left had no immigrants, and as she said, people were leaving the country, not coming in.
“There was no variety of religions to see or understand,” she said.

IMMIGRATION
“Toronto, on arrival — it was mind blowing just to see all the nationalities,” she said.

In thinking about her life, she remembers the sense of adventure in leaving Northern Ireland at the age of 20, new husband on her arm, taking their first ever flight from Belfast to London, finding their way to Southhampton and boarding The Carmania, a Cunard ocean liner.

“We thought nothing of it!” she said.

Recently, she contacted Pier 21 in Halifax. Even though their ship didn’t come through Halifax, the museum had their immigration documents and sent her a copy. She was amazed to see her own handwriting on the forms she filled out upon arrival.

Heather and Fred became Canadian citizens in the 1970s, once they realized their lives were here. Their daughter and son-in-law also live in Quispamsis, and their son lives in Halifax, so family is always close by.

“We were going to make our fortune and head back,” she said. “We’re still working on the fortune! I often wonder what our lives might have been like had we stayed. But we have no regrets.”

Robert Taylor over 1 year ago

An interesting journey! Thanks for mentioning Choir School -- we hope we can welcome your choir back next July 8th to 11th!

Cynthia Derksen over 1 year ago

I also recognize Heather from choir school! What a wonderful path of life for you . Blessings, Cindy

Robert and Donna Perry over 1 year ago

We really enjoyed reading about your adventurist journey from Northern Ireland to Canada. Thank you for sharing and best wishes in the future.

Sonia Mongford over 1 year ago

Dear Heather, my memories of you and the family was as a member of the choir of St. Paul's Church L'Amoreaux, I a member as well, also I taught her son Paul in Sunday School. I remember every Christmas Eve after the early service (we had two) the choir was invited back to Heather's house for a (potluck) one Christmas Eve night after the service we headed out to Heather's house and I had too much wine to drink and was singing off key (now Heather knows. We do miss her, I have kept in touch with Heather over the years,