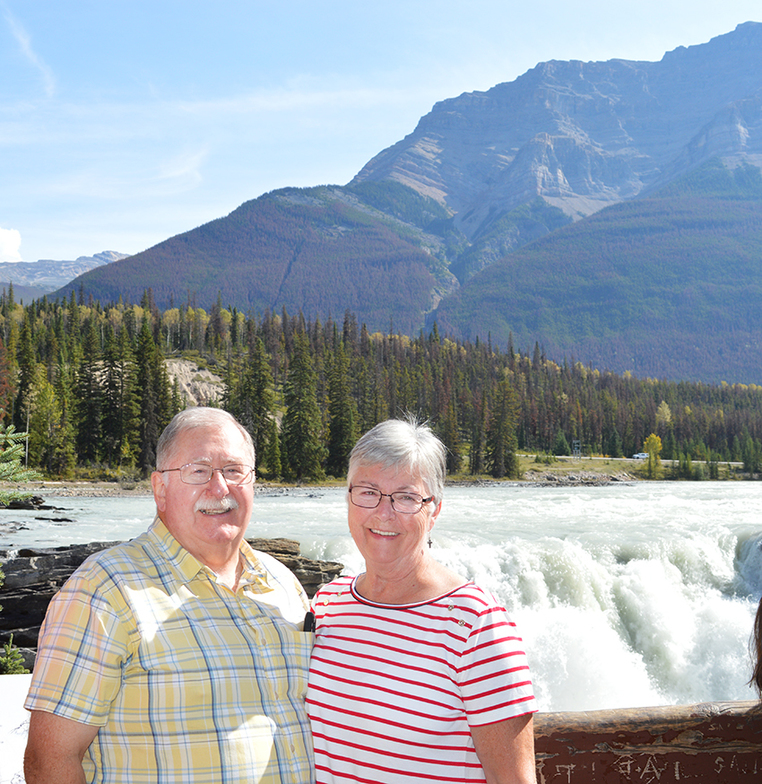 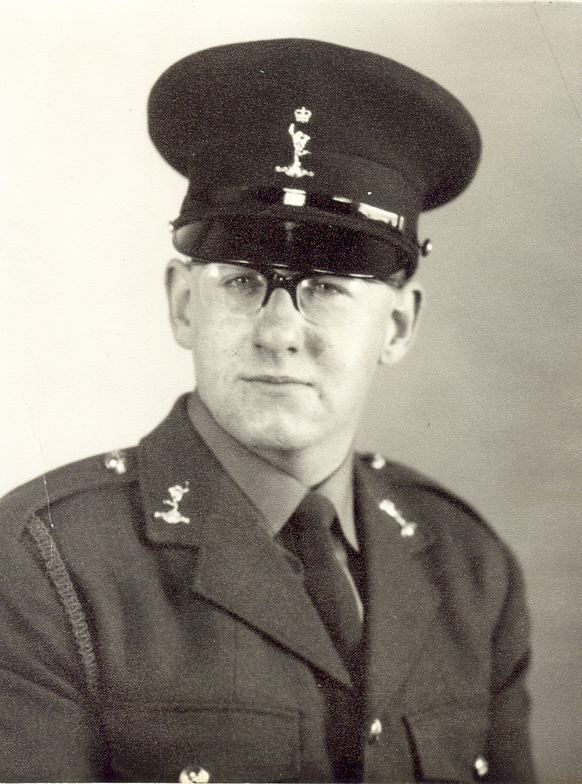 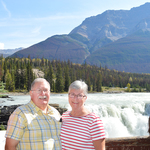 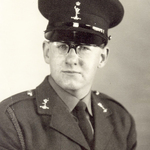 Peter Jubb can be described in many ways: a veteran of the British Army; a loving husband who cared for his ailing wife for many years; a fun grandfather; and a layreader in the Parish of Hillsborough Riverside. But most would also include “clown” in that description.

If you’ve met him, you’d agree. Peter loves to laugh, loves to chat, loves to tease. That disarming personality has helped him befriend locals in Hillsborough and invite them to the parish’s monthly community meal — and relieve parishioners of their cash to help pay for it. It’s hard to say no to Peter.

It was also that charm that led to his marriage to the Rev. Barb Haire in 2015. Both widowed, they began dating after her ordination to the diaconate. But let’s go back a few years, to Peter’s origins in England.

THE ARMY LIFE
Peter was born in Leeds just before the Second World War ended. He grew up with his parents and two older sisters, who walked him to school everyday and beat up anyone who picked on him (his words!).

He left secondary school and went to work for a couple of years until he was able to do what he really wanted. At the age of 18, he joined the British Army, where he stayed for nine years.

A communications linesman, his postings in the 1960s and 70s were varied: Cyprus, North Africa (Libya), Malta, Northern Ireland, Singapore and Germany.

Northern Ireland was the most demanding and frightening, with bullets hitting his Jeep as he delivered messages to police headquarters in Belfast. He spent a total of three years there, and lost a fellow soldier to a suspected IRA bullet.

The highlight in Singapore was jungle warfare training, taught by Gurkhas.

He left the army a corporal and went to work for the Standard Telephone Company, using his army trade to install telephone exchanges. In fact, this became his civilian career.

THE MARRIED LIFE
In 1977, Betty, Peter’s fianceé, chose his birthday on which to get married, judging that his Attention Deficit Disorder would hamper his ability to remember his anniversary.

“She said, ‘you’re so absent-minded. We’ll get married on your birthday.’ It was a joke, but…” said Peter.

Upon marriage, he became step-dad to Leslie and Shaun, and formed a bond with both.

“I never pushed for the children to accept me,” he said. “As a result, we’ve had a very good, close relationship.”

Betty’s two sisters had moved to Hillsborough, N.B. and in 1979, the Jubb family moved to join them. But by 1984, with a recession hitting Canada hard, Betty’s health deteriorating, and a job offer at home, they returned to the UK.

“I was a senior technician at Yorkshire Electricity Company, then elevated to third and then second engineer.”

In the meantime, Betty had developed Parkinson’s Disease, so he accepted an early retirement package.

“After that I looked after my wife,” he said, adding Betty was admitted to a nursing home in 2001.

But the children and Betty’s sisters were all in Canada and she was feeling the isolation. He was also dissatisfied with Betty’s nursing care.

Then Peter got an offer he could not refuse. Leslie’s husband, a builder, offered to build them a wheelchair accessible house on the Salem Road near Hillsborough, 2,500 miles from their home in England.

“We came over to Canada July 25, 2002. The house was all ready for us. It worked out really good. I kept Betty home and looked after her myself.”

Betty was happy to see her family again and her quality of life improved.

“Being around her grandchildren and great-grandchildren for those years — the end result was her happiness,” he said.

On Sundays when Betty was feeling well, Peter would take her to St. Mary’s Anglican Church, which installed a ramp so she could access the building.

“I managed to keep her at home for seven years,” said Peter. “Then the doctor said, ‘we’ve reached the limit of what you can offer her.’”

Peter and Betty had a frank discussion, where she fully realized the reality of the situation and what her condition demanded. When it came time to sign the paperwork, though Betty could no longer sign her name, “she made her mark on the paper, to help me with the guilt,” said Peter.

Peter developed a routine, arriving at Lakeview Manor every day to watch the news, and then Coronation Street, with his wife. He also became a volunteer there to be near Betty.

“When you make an oath before God, that’s exactly what you do,” he said.

The disease finally took Betty in 2013, but Peter sums up their life together this way: “Neither of us missed out on anything. We had no regrets whatsoever.”

THE ANGLICAN LIFE
Peter was raised an Anglican in the Parish of Batley, attending a church with history going back to the 1200s. As an adult, his Christian walk was on again-off again.

“They say there are no atheists in foxholes, and that’s true,” he said. “When you’re in those situations, you say a lot of prayers.”

Because of the war, Peter had never been baptised, so an army padre baptised him. But it wasn’t until Betty was very ill in the UK that things got serious between God and Peter.

“Leslie had been visiting and I had dropped her off at Glasgow Airport,” said Peter. “I drove past a church, and I don’t know why, but I had this overwhelming feeling to stop and go in.”

His prayers that day did not lead to a sudden about-face in his life.

“It was a gradual change, not like I’d seen the light. More like a shallow slap on the back of the head,” he said, describing God’s presence in his life.

He began attending his local church, St. James, got involved, helped out and took an Alpha course. All that, back in 1988, put him on a new, much more serious Christian path. It’s stuck.

When he and Betty moved back to Hillsborough, they were welcomed warmly at St. Mary’s. During the times when Peter couldn’t attend Bible study because he was caring for Betty, the Bible study came to them.

“That gave me a great deal of comfort,” he said.

THE MARRIED LIFE, PART II
As a member of the parish, Peter was invited to Barb’s ordination to the diaconate in the fall of 2014 at St. George’s in Moncton. It was as if he saw Barb in a new light that day, which led to a coffee date. He says it was she who asked him out, but that is debatable.

By the new year, he was thoroughly smitten. He went to Barb’s daughters to ask their permission for him to propose marriage.

“They whooped for joy!” he said, though that, too, might be debatable.

On Valentine’s Day he took Barb to supper at their favourite café, Cinnamon Soul, while her daughters waited outside to get a photo.

“It was a hesitant yes,” he said. “Someone yelled over, ‘if she says no, I’ll say yes,’” he said, though that, as well, might be an exaggeration.

In another story which may or may not be completely true, Peter described the day her children moved Barb into his home.

Peter is living the life of indulgent grandfather these days. His daughter, Leslie, lives in Riverview, and his son, Shaun, lives in Whitehorse, Yukon. Between them, they have given Peter four grandchildren, nine great-grandchildren, one great-great grandchild, and at the time of this interview, two more on the way.

From Barb, he has inherited five children and five grandchildren.

THE PARISH LIFE
Since getting married in 2015, Peter has become a diocesan layreader, crediting Barb for her encouragement. He heads a lot of the community outreach and is parish treasurer. He and warden John Whitmore do a lot of the heavy lifting in the parish.

“We are very fortunate that we have two layreaders and two that can preach,” said Peter. “We have Rob (the Rev. Rob Salloum) every other week, and we occasionally let Barb preach.”

He hesitated a moment before summing up his life in Hillsborough and marriage to Barb.

“I’m living in God’s country — Albert County — and I’m now married to the Reverend Mother. I just do as I’m told!” he said. “We love each other dearly — she tolerates me!”

PHOTO CAPTIONS:
1.  Peter and Barb in the Canadian Rockies.

2. Peter during his time in the British Army.

Lovely story from a great Yorkshireman! I'm from Bradford and have been in NB 49 years, I can relate to some of his story

Enjoyed your story Peter and glad you and Barb are happy. Miss seeing you both.