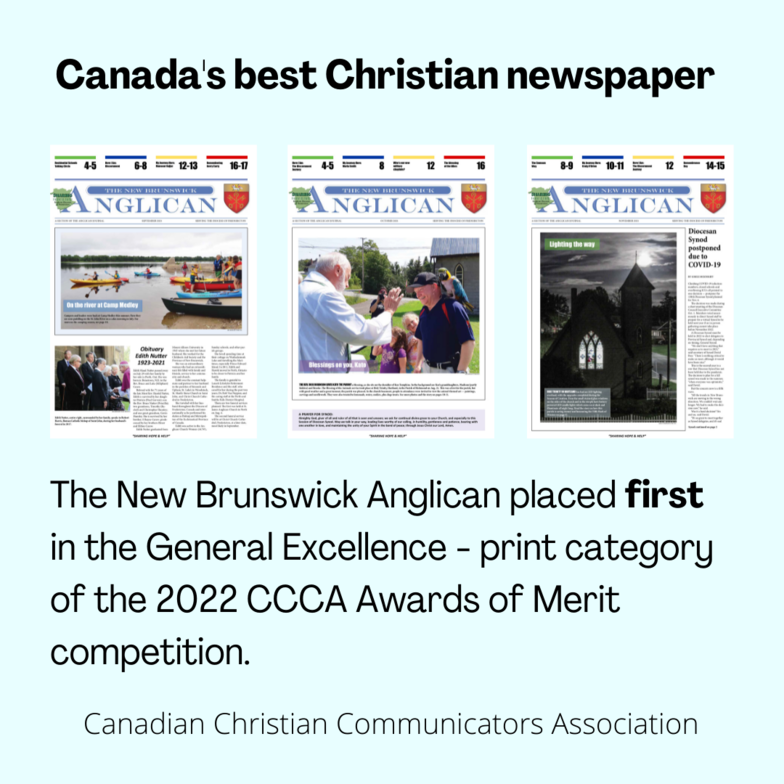 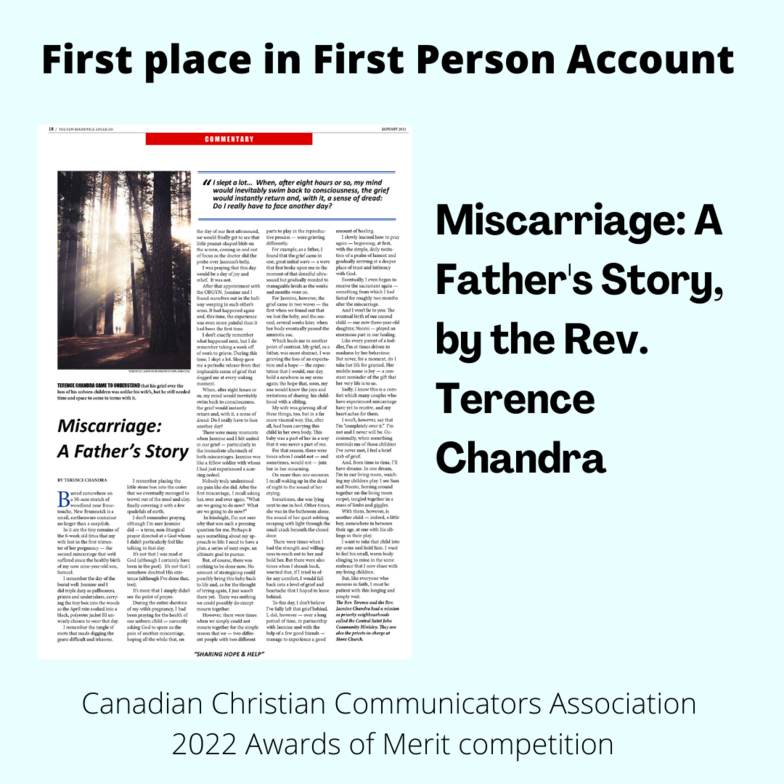 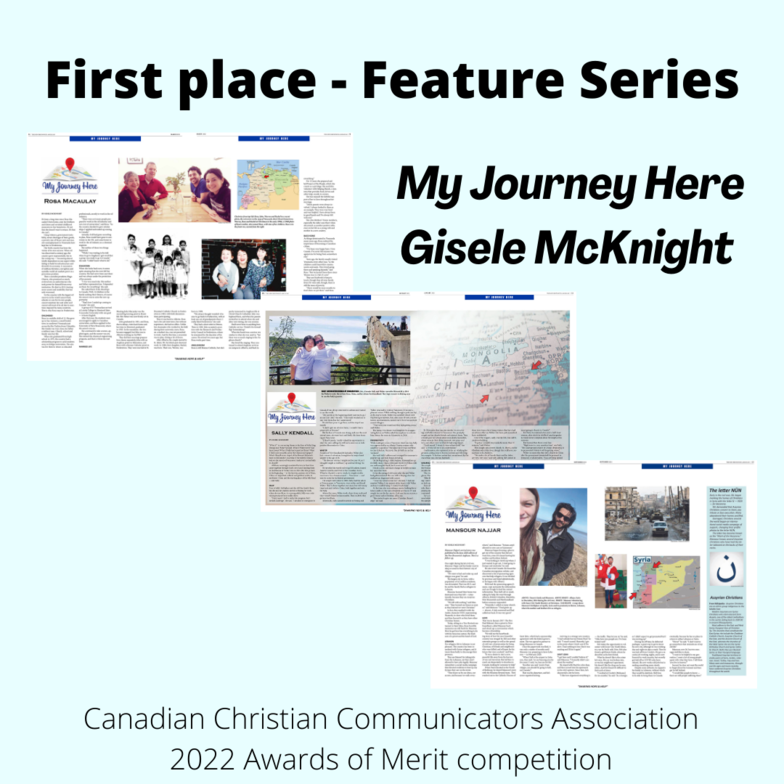 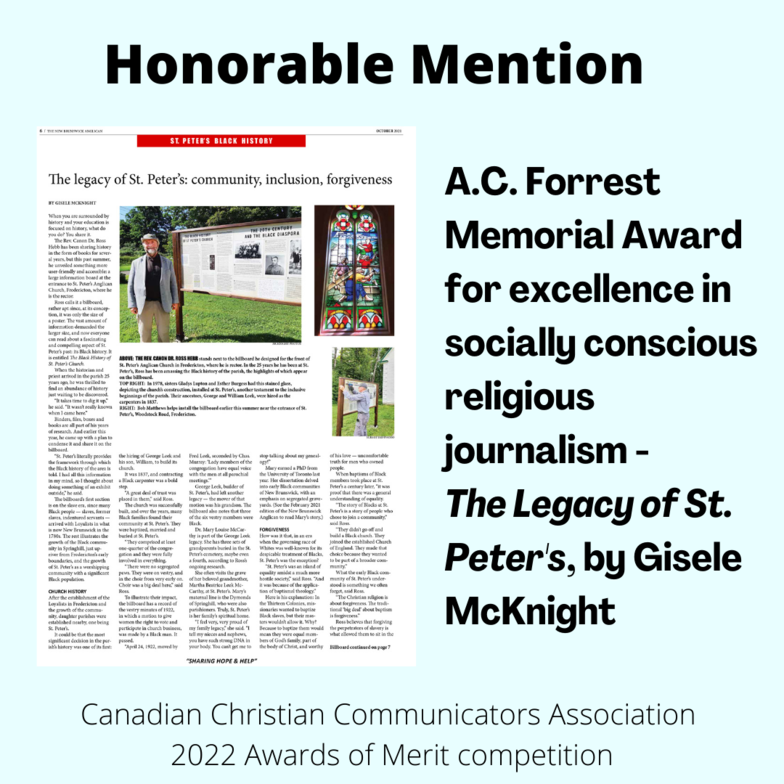 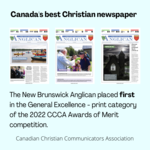 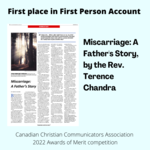 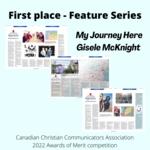 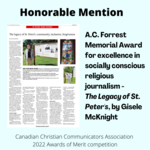 The New Brunswick Anglican newspaper has again been chosen best Christian newspaper in the country, as part of the annual Canadian Christian Communicators Association Awards of Merit newspaper and magazine competition.

The NB Anglican won the same award two years ago. The awards ceremony was held online May 11 during the CCCA’s annual conference.

Two more awards went to editor Gisele McKnight, and one to columnist the Rev. Terence Chandra. All entries were published in 2021.

Gisele won first place in the feature series category for My Journey Here, which chronicles the path parishioners have taken from their distant birthplaces to the Diocese of Fredericton. The three stories judged were of Rosa Macaulay (Venezuela), Sally (Jing Zhang) Kendall (China) and Mansour Najjar (Syria).

The judge noted, in comments about the series, that it is an “important editorial choice to feature stories of an increasingly multicultural church.”

Gisele also won an honorable mention in the premier writing competition called the A.C. Forrest Memorial Award for excellence in socially conscious religious journalism. The entry was her feature story on Black church history in Fredericton, entitled The Legacy of St. Peter’s.

Terence’s winning column was in a category called First Person Account. It was called Miscarriage: A Father’s Story, and it shed light on a little-talked about issue, prompting the judge to say, “Rev. Chandra has written a searing and deeply personal account of his grief over a miscarriage. The topic is sad but the writing is visual and excellent. It is honest, moving and memorable.”

“This publication reads, looks and just generally feels like a community paper intent on covering its community. The stories are the right length, making them accessible. The photos appear to be local, as do the stories,” he said.

“You get a sense you might see someone or read about someone you know as you flip through it. That’s a recipe for success in this business.

“The layout is clean. Short items like the one on giving new life to old pews is fun, easy to read, and the photos help illustrate it well. Stories like the ones on a church that’s now lit with LED lights, and the one on the blessing of the animals, give this paper a sense of being in touch with its audience.”

Archbishop David Edwards was pleased with the news.

“Once again our diocesan newspaper has won national awards,” he said. “The quality of the reporting is there for all to see, and the content is appreciated by many in the diocese and beyond.”

Cynthia Derksen about 1 month ago

I am so proud of Gisele & her wonderful coverage of diocesan events. She is a blessing to so many people- thank you Gisele!!! Cindy

Gary Denniss about 1 month ago

As an outsider looking in, and not even a person from your denomination, I am certainly in agreement with those who saw the great things your newspaper is doing. Well done. Rev. Gary Denniss (Bracebridge, ON)