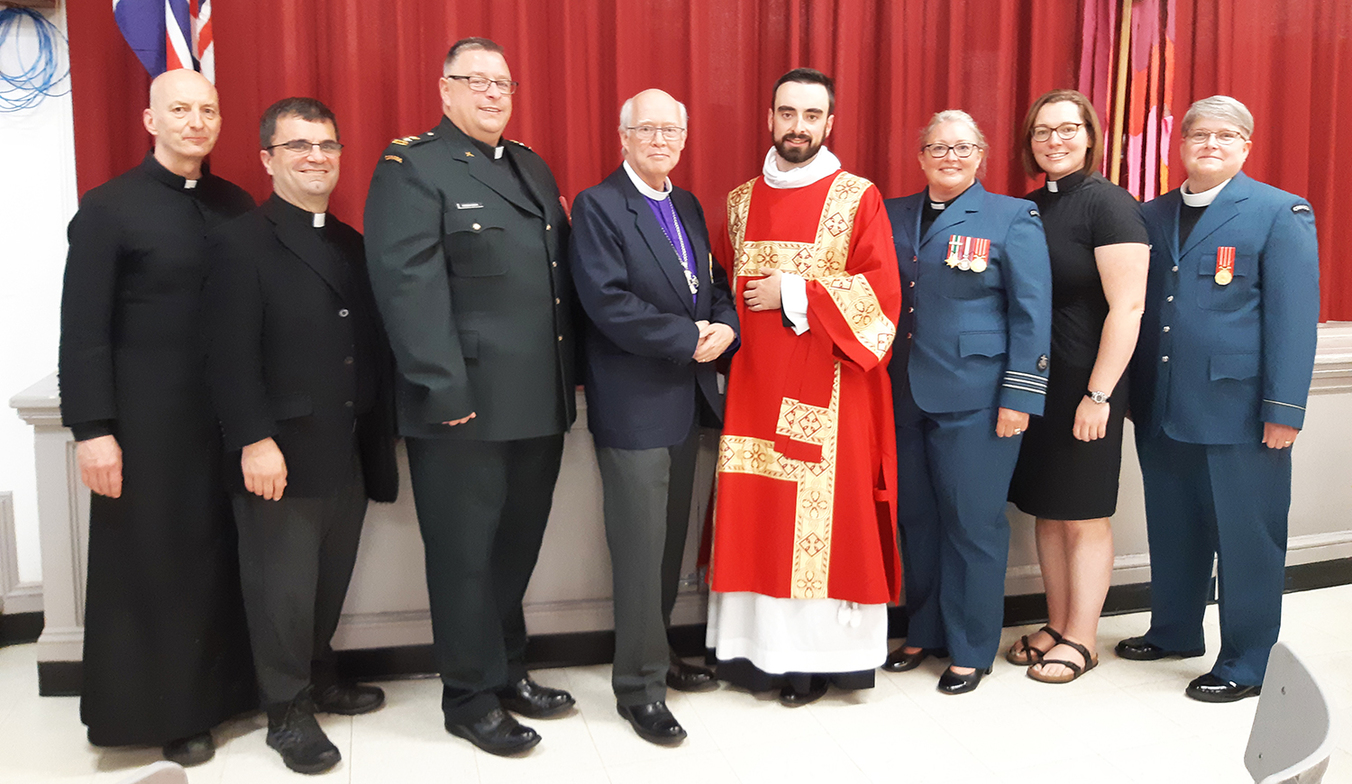 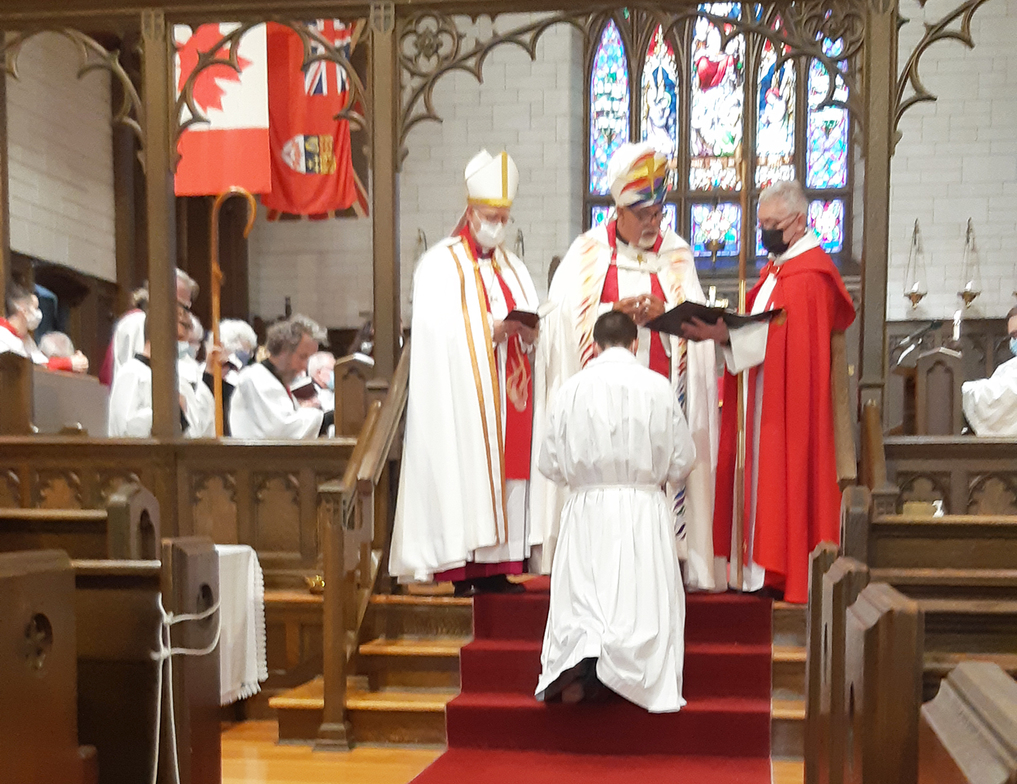 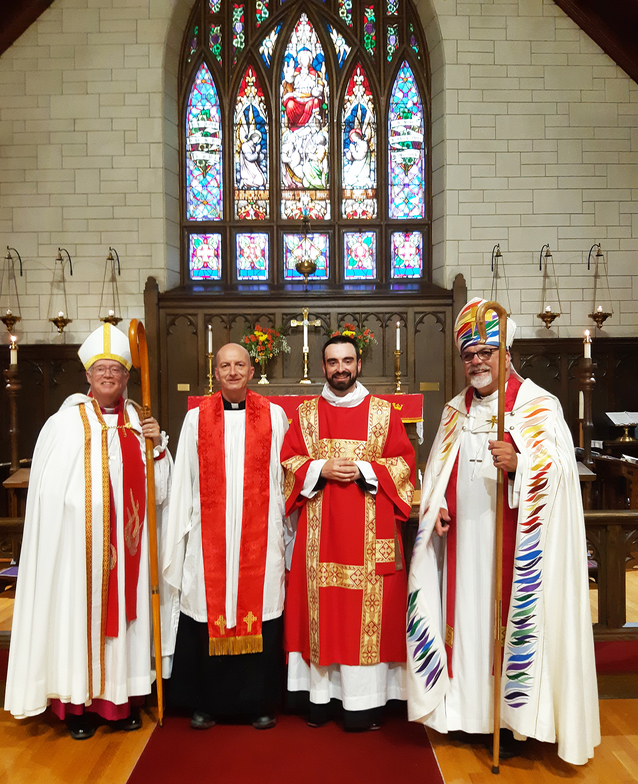 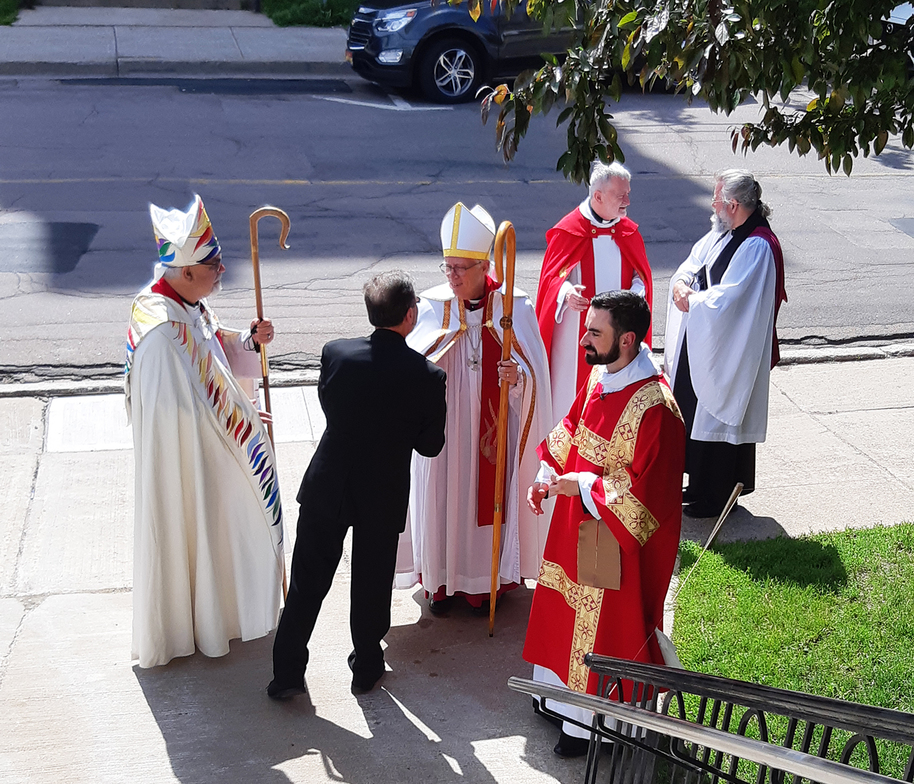 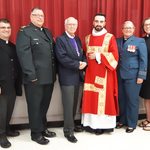 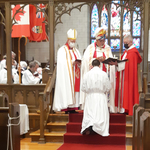 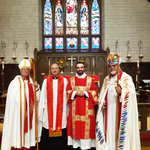 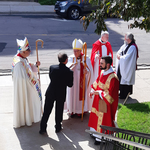 St. George’s Anglican Church was the venue for the ordination of Nicholas Saulnier on June 11. He was ordained to the transitional diaconate on the Feast Day of Saint Barnabas the Apostle.

His is a unique career path. Three years ago, Nicholas was a captain in the Royal Canadian Air Force, working as an air battle manager stationed in Rome, New York, as part of the North American Aerospace Defense Command (NORAD).

He’s spent the past three years as a student at Wycliffe College in Toronto, earning a masters degree in Divinity in anticipation of ordination.

His aim is to become a military chaplain. The requirements included ordination, followed by two years spent in the diocese under the bishop’s direction.

Nicholas has been sent to the Parish of St. Mary, York, where his priest, the Ven. Kevin Stockall, is overseeing his own parish, plus the parishes of Stanley and Marysville.

Nicholas chose his home church of St. George’s in which to be ordained, and parishioners came out in full force to support him.

“It’s a good day to welcome Nicholas into the office of deacon,” he said. “We’re looking forward to his ministry in the two years with us until we, sadly, hand him off to Bishop Nigel.”

Bishop Nigel responded by saying, “It’s an absolute delight to welcome you, Nicholas. I anticipate getting to know you much better in two years when you come into full-time ministry.”

Nicholas was thrilled with the support from the Canadian Armed Forces at his ordination.

“Such a strong turnout from Anglican military chaplains was really special,” said Nicholas. “I am really just grateful for all the support I have.”

His presenters were priests Chris VanBuskirk, Brent Ham and Chris Ketch, along with Major (Retired) Douglas Grant and Debbie MacDonald.

The Rev. Dr. Ranall Ingalls preached. He described the work of a deacon, which biblically means to attend.

“The work of a deacon is the work of a servant of Christ, waiting on Christ,” said Ranall.

“The deacon acts as the rector’s eyes, the parish’s eyes. Surely all are to do this, yes, but a deacon has been set apart and made available for that purpose.”

We are not chosen for a life of ease, but of fruitfulness; not for honour, but for servanthood, said Ranall.

The clergy, said Ranall, are surrounded by people who are more wise, more patient, more holy that they.

“Nicholas, if you haven’t realized that yet, you will,” he said, to laughter.

After the service, a reception put on by St. George’s Willing Workers, was enjoyed by everyone. The Rev. Canon Chris VanBuskirk noted the Willing Workers predates the ACW (Anglican Church Women) in the parish.

Nicholas was pleased and grateful for the many supporters who witnessed his ordination.

“I thought it went really well, and felt that it was a blessing to have so many people be able to attend such a joyful event.

“I’m very grateful for such a show of support from people all over the diocese and the Maritimes. It really was a coming-together of Christian friends I’ve met over many years of camp and events in the area.”

Nicholas has been a long-time participant at St. Michael’s Youth Conference, as both a conferee and later, as a counsellor. In a 2019 interview, as he prepared to temporarily leave the Canadian Armed Forces, Nicholas described his spiritual and career paths.

“It will be very different going from defence to pastoral care,” he said of the plans before him. “It’s been in the back of my head for a long time. Now it’s slowly come to fruition — after a long period of discernment. I’m trusting in God to lead me.”

Nicholas’s tie to St. Michael’s is so strong that he repeatedly made the trip from New York just to be there. But did SMYC have any bearing on his new path?

“I definitely think so,” he said. “It exposed me to different aspects of faith that I wouldn’t otherwise have seen. I consider it almost a home to my upbringing in faith. I’ve learned a lot here.”

4.  The Rev. Lt. (Navy) Greg McMullin (in black suit) chats after the service with Archbishop David Edwards and Bishop Nigel Shaw, with the Rev. Capt. Nicholas Saulnier, the Rev. Canon Leo Martin and the Rev. Dr. Ranall Ingalls at right.

Congratulations to Nicholas, one of our treasured Choir School alumni.