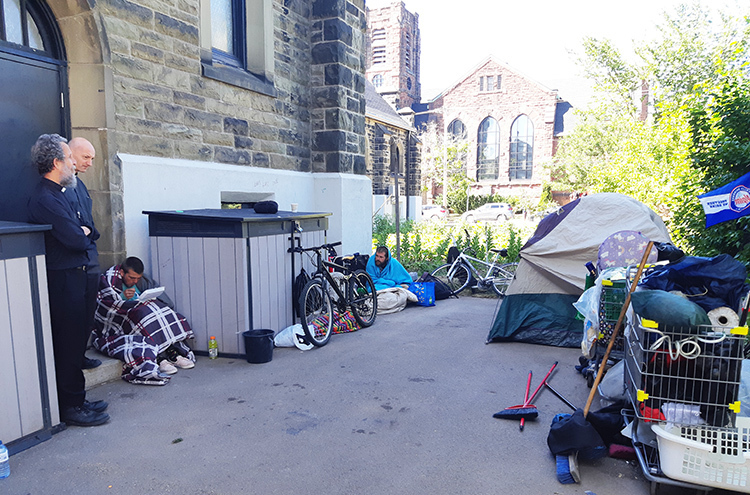 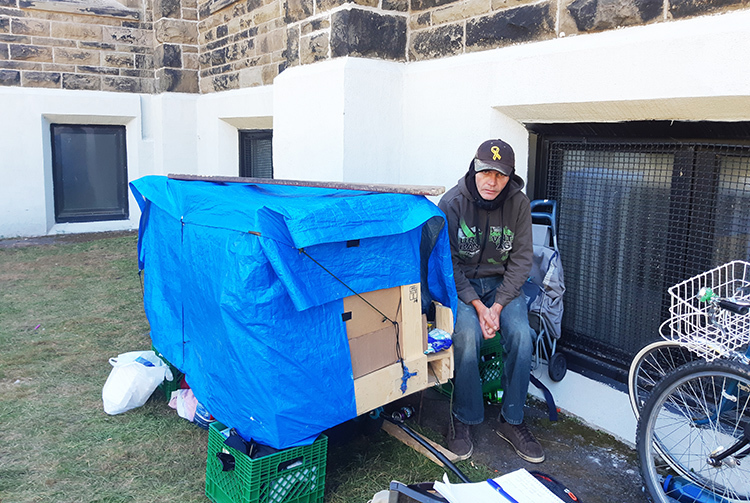 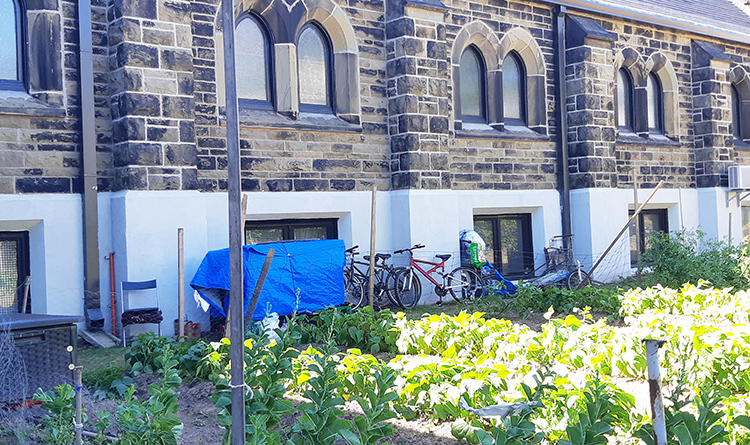 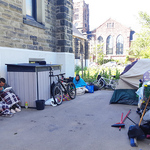 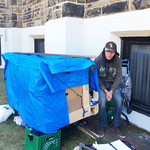 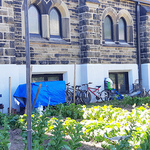 Terry was the first to arrive. He’s from Ontario and came to Eastern Canada three years ago. Then Mike and Colleen joined him.

“Terry asked [permission], which is very unusual,” said the Rev. Canon Chris VanBuskirk, rector of St. George’s in downtown Moncton. “What sets them apart is they haven’t asked us for anything.”

Chris is talking about the small homeless enclave that has taken over the paved area outside the back door of St. George’s. After the first three, Natalia and Corey showed up. They are the only ones with a tent. Others have joined them as word has gotten around, including a person in a wheelchair.

“It’s a very active spot and it changes daily,” said Chris, adding most are drug-addicted, and/or suffer with mental health issues, and they are without identification to enable access to government services. All say they are ‘waiting for housing.’

This is not new for St. George’s. During past summers, there were campers, which came with fires, fights, garbage, human waste, syringes — and the police. The difference this time is there are two vulnerable people in the group.

Every day, Chris and the Rev. Norm Dupuis check on their guests, have conversations and deal with issues. It’s not pretty. In fact, the back area is a mess of shopping carts, bicycles, bags and garbage. But it’s a mess the parish can live with.

“St. George’s has been plugging away at this for years,” said Chris. “But they support it — the cost of meals, of showers. They don’t look at it that way. I’m very grateful for the parish support of the ministry God has given us.”

Late last week, for the first time, St. George’s distributed a list of conditions for staying this week, which each person signed. It asks for respectful behaviour, control of garbage, and use of the church washroom as opposed to the yard, among other things.

It outlines the need for safety — both for the church building and the people staying there. It states the times for two daily inspections and the times they can use the church shower, bathrooms and telephone. It asks that each one be registered. It also offers whatever assistance they might need.

This week YMCA outreach workers visited to help guests get IDs and services. One girl is pregnant, so she, especially, will need intervention.

Chris and Norm — and the entire parish — are walking a fine line between maintaining the property entrusted to them, and living the example of Jesus Christ. It is, admittedly, an uncomfortable place to be. In fact, Chris was set to ask them to leave last week.

“I was actually going out this past Thursday after Evening Prayer to give them notice to move when I became aware of three things:

“It had rained and a lot of their gear was wet; they were in the process of sweeping the pavement (without being asked) and cleaning up the site; and we confirmed that one of the girls is 5-6 months pregnant.

“These factors caused me to wait and sleep on the situation.”

By Friday morning, he had come up with the terms and conditions, but applicable just to this week. Chris says several things have influenced his actions:

• The Gospel account of Jesus’ Temptations in the wilderness;
• The respectful attitudes of those involved;
• The need for the Church to enter into the suffering, even when it is unsightly and messy, and even when there are no easy solutions;
• The fact that two vulnerable people are involved.

The terms and conditions are for this week only. Chris does not know what next week will bring and says he, his parish and Archbishop David Edwards are all concerned with what the fall will bring and where the people will go.

For a variety of reasons, St. Georges’ guests do not like staying in shelters, though that might be their only option with fall coming.

“I think people will be forced into shelters if there’s any room,” said Norm.

TERRY’S STORY
Terry is 49, though he looks older. He lived on a disability pension in Ontario after an on-the-job injury. With the cost of living so high, he set out for New Brunswick three years ago, where he has family. He’s lived in Moncton since last year and has not had access to his Ontario pension.

“I moved here for better opportunities but I moved into homelessness,” he said, adding he had an apartment with roommates, but when the lease-signer died, the landlord evicted the others.

Access to affordable housing is a common problem. Terry sees landlords fixing up places and then increasing the rent, putting them out of reach for low-income people. He’s hoping for a rooming house this winter.

Terry is a bit different from the others he’s currently camping with. He literally lives in a small cart that he built.

“I made it look like a utility trailer because there’s no camping in the city,” he said. “It cost me $10 for the tarp. Everything else is reclaimed.”

Terry moves the cart with his bicycle and sets up wherever he can.

“Location is a problem,” he said. “No one wants us.

“This church has been great, though. Chris and Norm have been phenomenal. We’re grateful for it. It’s not an easy life.”

Editor’s note: Since our visit last Thursday, many more campers have arrived at St. George’s as word has spread. Prayers for this situation are encouraged.  See the CBC story on the same topic here.

1. The Rev. Norm Dupuis and the Rev. Canon Chris VanBuskirk outside St. George's in Moncton where several homeless people have been staying.

2. Terry and his shelter — a cart he made from scraps.

3. The scene outside St. George's. It has changed since last week, with many more campers, tarps and tents.

An excellent story Giselle! HEART-BREAKING. One size indeed does not fit all...

What a wonderfull story. This is the essence of Christianity. Helping those who for what ever reason can't help themselves. All the best as fall sets in.

As soon as this story came to my attention, so did this thought: they don't make them any better than Chris. Such a good guy. He always has been. This is church at it's best. Praying a better and brighter way forward becomes clearer in the days and weeks ahead for these folks.

God Bless You All.......Such a wonderful example of God's Love for his people! I pray that God's direction will be clear for the decisions that will need to be made as our weather gets colder.
.

I am a member of St.George's ,my wife and I are two of many of volunteers that try to help these people in need. It's hard not to get frustrated at times with the personalities we have to deal with, but we know we are doing the work Christ has asked us to do, and it makes us humble, we thank God everyday for the guidance we recieve from Fr. Chris and Norm and pray others will have compassion for these individuals.

God bless St George's, Rev Chris and the volunteers in his parish. What a wonderful example of caring for others in need. When I first read of this on CBC I thought immediately that this is what Chris VanBuskirk is all about.

This is truly a testimony of God’s love in action. So few of us would be prepared to do what St. George’s ministers and members are doing. We had the privilege of Chris being our rector for a number of years; and this new ministry he is involved in demonstrates exactly who he has always been. God bless him, Norm and their parishioners.

This situation can strike anyone so quickly. I pray for wisdom & patience for the congregation working for these homeless people. May God bless everyone involved & may we see positive results with God's help