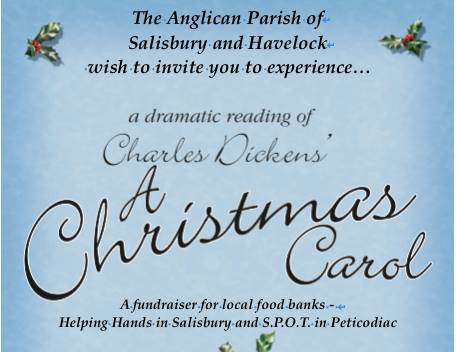 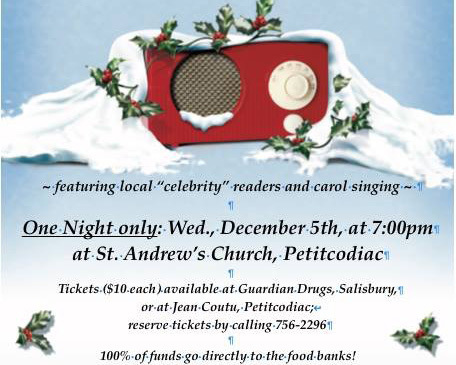 Following in the footsteps of Charles Dickens himself, the Parish of Salisbury and Havelock will present a dramatic reading of A Christmas Carol on Wednesday, Dec. 5 at 7 p.m. at St. Andrew’s Anglican Church in Petitcodiac.

Charles Dickens’ novella about a miserly businessman turned joyous, generous neighbour on Christmas morning has been a popular seasonal story since its publication six days before Christmas in 1843. In fact, it sold out by Christmas Eve, prompting a second edition. Within a year, 13 editions had been released and it’s never been out of print since.

“Charles Dickens reworked the text of his novella into a script for public reading, and had travelled to all sorts of places to read it,” said the Rev. Chris Hayes, rector of the Parish of Salisbury and Havelock.

“His wishes were that wherever it was read, it was to raise funds for those in need, and that the ticket price for the event never be made out of reach for the masses.”

Tickets for this reading are $10 and all proceeds will be split evenly between two food banks in the parish — Helping Hands in Salisbury, and S.P.O.T. (“Serving People of Today”) in Petitcodiac. They hope to sell 120 tickets, which would see $600 donated to each food bank.

“I felt this was a wonderful, unique way to raise funds for food banks at this time of years, as Dickens had wanted,” said Chris, adding this is the third time the parish has hosted the fundraiser.

The entire story is read in five staves, as Dickens called the chapters, with musical interludes. This year, the music will be a group carol sing.

“We have local ‘celebrity’ readers, including a village councillor, a retired teacher, a school librarian, a grocery store owner, and a Mennonite pastor,” said Chris.

Limited tickets are available at Salisbury Guardian Pharmacy, Jean Coutu Pharmacy in Petitcodiac, or by calling 756-2296. A reception will follow the reading.

“This night nicely follows up on our parish “Dinner And A Movie” night. We watched the film “The Man Who Invented Christmas,” which tells the story of how the book came to be,” said Chris.

Written with information from wikipedia.com

Moncton
St Andrew, Petitcodiac
Comments for this post are now off.

May 16
Let Us Pray!
May 16
ReJesus
May 19
Finance Committee Meeting