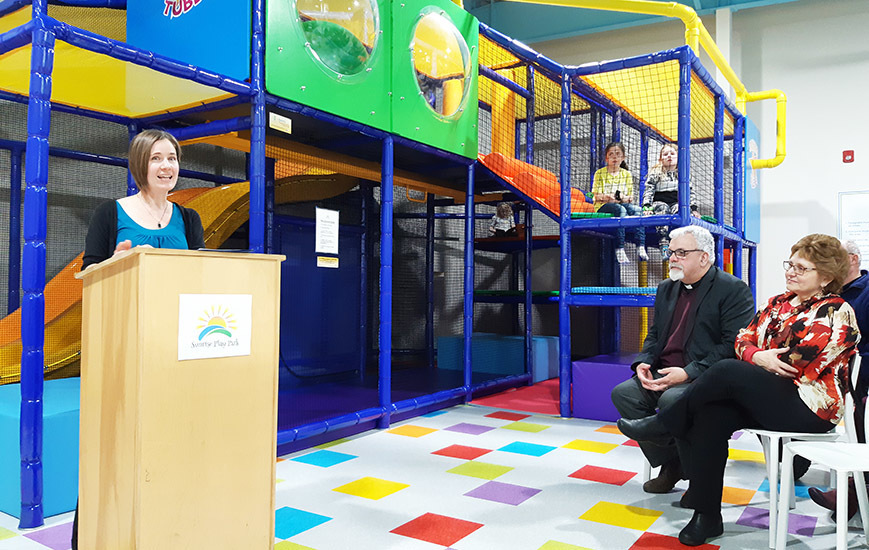 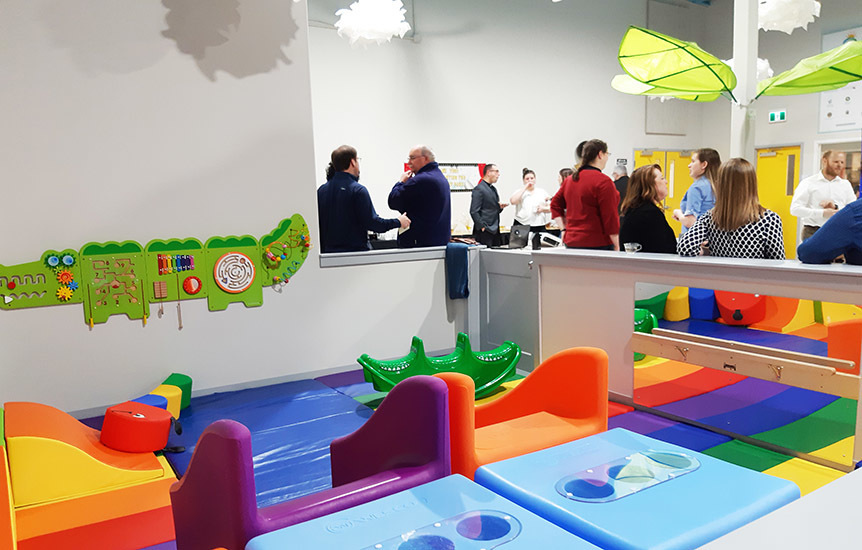 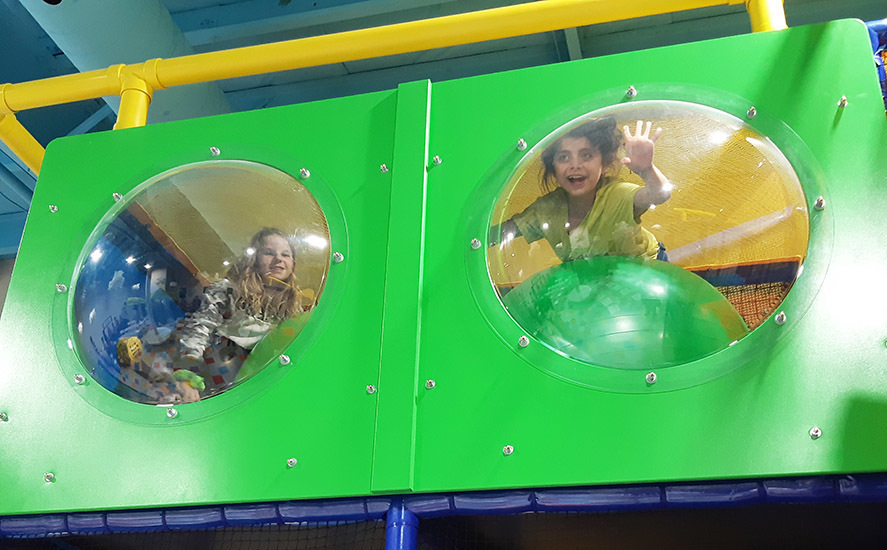 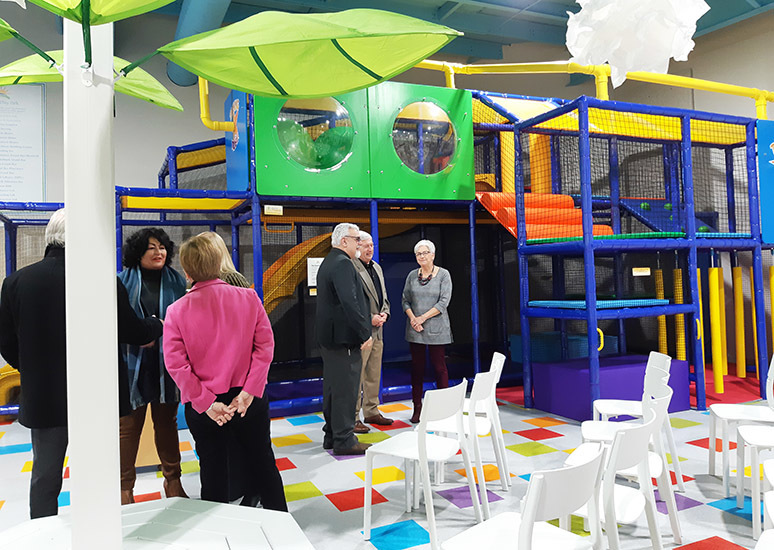 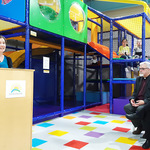 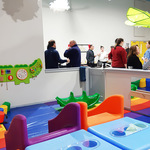 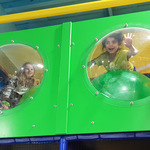 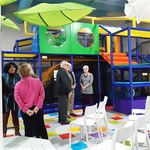 Five years ago, the people of the Church of the Resurrection — the Rez, as it’s known — had a big, dark warehouse-like space and a tiny glimmer of a vision.

Their mission statement — Jesus centred, in the community, for the community — led them to realize that space was destined for something beyond a simple hall and something far beyond themselves. And so the process to discover God’s path began.

On the evening of Jan. 31, the path laid out by God, worked on my many volunteers and supported by a long list of community members, was celebrated with the opening of the Sunrise Play Park, an indoor recreational facility for children aged 1-12.

“We didn’t need a big hall,” said the Rev. Mike Caines, rector of the Parish of the Nerepis and St. John in Grand Bay-Westfield. “This is much more what the community needs.”

The main elements of the play park are a large, open structure with two racer slides, bolster climb, moonwalk, yoga balls, talking tube, and zipline; a toddler centre for younger children; a birthday party room; second multipurpose room; accessible washrooms; and a reading tree. Several rooms have kitchenettes.
Judy's reading tree was made possible by a donation from a teacher to support literacy. The large structural beam in the room is now a “tree trunk” sprouting whimsical green leaves, with a base to sit on, under which books are stored.

The all-day fee for one child is $6; a second child is $4; every additional child in the family is $3. For more information, consult the website: sunriseplaypark.ca .

April Medford is the play park director, who noted what parents are already telling her: this indoor, accessible play facility has been needed for a long time.

“Twelve-year-olds are having as much fun as one-year-olds,” she said. “It’s interesting to see the kids on the various equipment and what their creative minds want it to be.”

Parents have already offered to volunteer, and she is mentoring teen volunteers on the weekends. She always has at least one volunteer on duty with her, more on Saturdays when they’re busiest.

Mike spoke at the grand opening in front of several dozen parishioners, donors, community members and children. He gave all the credit to a long list of others who have been instrumental in the four-year process to bring the vision to reality: his wife, Anna, who acted as project co-ordinator; Bishop David Edwards and his parishioners, who supported the vision from its inception and worked to make it happen; and the community, which stepped up financially to support the $620,000 project.

“I simply get to be the leader of an amazing team that lives and believes the vision,” he said. “It was a big team effort, but if there was one person that carried the freight through the long, dry seasons, it was Anna.”

Anna addressed the crowd as well, saying, “The message we want to convey tonight is thank you. Four years ago we had a vision for finishing the back space with something that would benefit the public. We had a deep conviction to give to the community.”

She went on to talk about the trend toward social isolation and the need for shared spaces to promote healthy communities.

“Here, kids are running off energy, but they’re doing more,” she said. “They’re making connections. Parents are meeting each other. Kids are becoming friends.”

She noted their business plan dictated they would need 75 children through the doors each month to break even. In the four weeks since opening on Jan. 2, they had 685. They have birthday parties booked, two per Saturday, until the end of March, with some booking into the fall.

To enthusiastic applause upon hearing those stats, Anna said, “That’s a whole lot of community happening here, and it couldn’t have happened without the people sitting here tonight.”

Anna estimates that beyond grants and financial support from parishioners, “easily $250,000 came from the community. People from businesses that donated or cut costs.”

The Town of Grand Bay-Westfield donated $15,000 and was a supporter early on.

“I want to say how very proud we are to be involved as a community partner,” said Mayor Grace Losier, adding that she too understands the need for social inclusion and spaces for people to gather as part of healthy lives and healthy communities.

Bishop David and his wife, Debbie, were on hand for the opening, and he too, spoke of the need for gathering places.

Churches were those gathering places 50 years ago, he said, though that role has slipped away.
He spoke of the three main spaces humans inhabit: their work spaces, their home spaces and a third space, which in many communities is Starbucks —the place where people hang out, think, develop their life plans and sort out their values.

“Churches were third places for centuries,” he said. “This [play park] is an important pointer to the church of the future and an historic link to the past. I am hoping and praying that this is the first of many third spaces we are developing. Some are already in development.

“For those of us who identify as Christians, this is the gospel,” he said, pointing to the facility.

1. Project co-ordinator Anna Caines speaks to the crowd during the grand opening of the Sunrise Play Park, housed in the Church of the Resurrection in the Parish of Nerepis & the St. John (Grand Bay-Westfield) on Jan. 31. At right are Bishop David & Debbie Edwards.

2. The toddlers' area, with supporters who attended the opening in the background.

3. Best friends Ella and Assma enjoy the play structure during the grand opening.

4. Bishop David Edwards, centre, chats during the grand opening. Judy's reading tree is seen in the foreground — the large white structural beam with whimsical green leaves and wooden seating at the bottom of the "trunk." Beneath the seating area are cubbies filled with books. It is a well-used part of the play park, made possible by a donation from a teacher who wanted the money used for literacy.

St. Andrews
Church of the Resurrection

Claude Miller over 2 years ago

The story in the Diocesan ENews fills my heart with joy! Congratulations! to the Parish and Community on the official opening of the Sunrise Play Park. Bless all who contributed in any way to the success of this endeavour. A vision to serve others is realized by this exceptional "Good Work" demonstrating God's love for his children.

Sincerely in the love of Christ

Vicars Hodge over 2 years ago

I cannot express how delighted I am to see this amazing project come to fruition. This is a fulfillment of a vision begun many years ago -- realized by the visionary leadership of the Rez. Hats off the Anna, Mike, April and the Parish. What a wonderful way to bless the community and use this space for the Glory of God