‘Why does God allow evil’ discussed in Fredericton forum 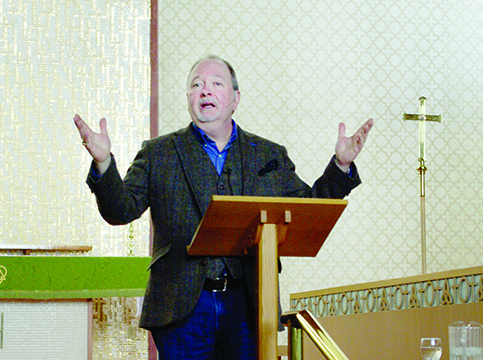 The second public forum organized by the Diocesan Mission & Outreach Team took place Jan. 31. The speaker was Dr. John Stackhouse, a professor at Crandall University, whose noon-hour presentation was entitled Why Doesn’t God Do Something? An Honest Look at the Problem of Evil.

This talk took place at Christ Church (Parish) Church in front of about 70 people. Stackhouse gave a second talk at UNB the evening of Jan. 31, again hosted by the Mission & Outreach Team, called The Recent Death of Reason: Are We Now in a Post-Truth Age?

At the noon-hour talk, Stackhouse began by saying the question of why doesn’t God do something about evil is a problem only for some — those who believe in God.

“It’s a problem for believers — a big problem,” he said. “The bible shows us that God’s own people wrestled with the way God ran the world.”

Why do the wicked prosper? All through the Psalms, plus Job, Moses and Jeremiah, to name a few, all asked that question, and the church continues to struggle with it even today.

“Because it’s such a problem for believers, it’s unlikely we’re going to solve it here today in Fredericton,” he said.

However, he proposed that if God wants our allegiance, our trust and our obedience — and he does — then in the face of evil in the world, he has three ways he could go about it.

First, God could tell us what he’s doing, which is surely our preference.

Sometimes in church, especially at funerals, we hear promises along that line: ‘We don’t know why this terrible thing happened, but someday we will.’

“That’s not true. There’s not a single verse in the bible that says God’s going to tell us,” he said.

There will be no seminar for billions of people where God reviews our life and says, ‘you see here when you were 12 and that girl broke your heart, here’s what I was doing there…’

“I don’t think we have the intellectual capacity to understand, nor the moral excellence to judge that God did the right thing,” he noted.

Stackhouse talked about Job and his ordeal. Readers know more about Job than Job knew about Job because we have the back story of the bet between God and Satan. But what God said to Job was, ‘You can trust me even though it looks like you can’t.’

“But God doesn’t just demand faith from Job, he gives good reasons to trust,” said Stackhouse. “Faith is always dependent on what we think we know.”

However, humans cannot will themselves to believe something without some knowledge of it. He told the audience that he watched everyone come in and sit in a pew, “but nobody did a proper structural review of the pews when they sat down.”

You didn’t, he said, because you had some knowledge to believe that the pew would not fail. You’ve probably not fallen through a pew, nor seen it happen to others, so your brains said it’s OK to sit.

“You don’t know for sure, but you’re pretty sure because of past knowledge,” he said. “We trust as far as we can, only if we have knowledge adequate to our faith.”

Thirdly, if God wants our allegiance, he must give us good grounds to trust him.

But there are good grounds, he said.

“Think about the world as a good world after all. Is it possible to think of the world and conclude that it’s the kind of world we need, even if it’s not what we want?”

In order to be happy, which is what we all seek, we must recognize the unhappiness.

“We need to get our heads around our bad news, and we can’t fool ourselves by thinking we’re ‘a little bit sick’ when we have a lethal problem.”

He cited the beginning of the 20th century when it looked like life was a dream come true — peace, prosperity, culture, innovation and so on. Europeans believed they were living in a gilded age. It took only 14 years for those countries to go to war against each other, and everybody — on each side — thought God was on their side, he said. Savagery, misery and death unlike anything before it ensued, with much more to come.

Life continually challenges us, and it takes a long time to become our best selves, he said, though the world gives us all kinds of opportunities to grow up and be better than we are. To be a better person, we must go through the process of developing good habits.

“We have to grow, and that means experiencing some evil,” he said, noting the answer to the big question lies with Jesus.

On the night he was betrayed, Jesus knew what awaited him, but still he prayed to God for another route to avoid suffering.

“I have three boys, and if I can help them avoid suffering, I do it. It’s automatic!” he said.

God is the father of Jesus, and even though Jesus prayed to him three times, the answer was the same.

“God can’t rescue Jesus from evil if the purpose is to be fulfilled,” he said.

Can we use that same example in our own lives?

Martin Luther, in the 16th century, had the same doubts as we do — a God seemingly hidden in the darkness who doesn’t tell us why there is evil in the world. In fact, the doubts were so great he sought advice from his spiritual mentor, who told him this: ‘you must flee the hidden God and run to Christ.’

“It’s almost heretical, but when you wonder if God can possibly be good because of the way he runs the world, run to Christ.

“When I feel it, and I feel it frequently, I flee the hidden God and run to Jesus,” he said.

Stackhouse told the story of his grandparents. His grandmother was a saintly Christian who suffered from multiple sclerosis. His grandfather was not so saintly. He eventually gave up alcohol and cigarettes but he still had a very bad temper.

His grandmother’s health became so poor that her husband had to quit work to look after her. He did that for 20 years.

Through that process of caring for his wife, “he became radiantly different in the last 15 years. The only thing that changed was his caring for her.

“I don’t think God lets people have disease for no reason.”

Stackhouse’s presentation ended with several questions from the audience.

The Mission & Outreach Team plans to continue holding public forums. The next one will be in the fall.

Dr. John G. Stackhouse is the Samuel J. Mikolaski Professor of Religious Studies and Dean of Faculty Development at Crandall University in Moncton. A graduate of Queen’s University (First Class Honours), Wheaton Graduate School (summa cum laude), and the University of Chicago, he formerly taught at Northwestern College, the University of Manitoba, and Regent College. He is the editor of four books and author of over 800 articles, book chapters, and reviews, while his tenth authored book was released last year, Why You’re Here: Ethics for the Real World (Oxford). He has lectured at Harvard, Yale, Stanford, Edinburgh, Bristol, Hong Kong, Macquarie, and Otago universities as well as across Canada. His work has been featured by media as diverse as The New York Times, The Atlantic, The Times Literary Supplement, ABC News, and CBC Radio.

Natalie over 2 years ago

Excellent read, any plans of holding these forums in other cities?

Very much enjoyed reading this in its entirety. Hope to hear more in the future. over 2 years ago

A much refreshing outlook on god and our Christian views of God.