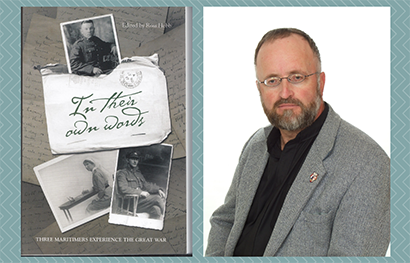 In Their Own Words: Three Maritimers Experience the Great War, by Ross Hebb, published by Nimbus of Halifax

NB Anglican: Is this not your second book of Great War letters? How did an Anglican minister get involved in such a topic?

RH: Back in 2011 I was on sabbatical leave in England. After I spent five weeks immersed in Cathedral life at Norwich, my wife and son joined me for a trip to France.

Among other sites, we visited Juno Beach, Vimy Ridge and Ypres in Belgium. We actually stood where John McCrae penned "In Flanders Fields."

As part of this visit, I looked up the grave of the son of the rector of St. Peter's during the Great War, Lawrence T. Wilkinson. Young Lawrence studied for the ministry at King's College just as I had, but upon graduating was too young to be made a deacon so he joined the army.

He died of wounds just over a year later in October 1917 and is buried at Nine Elms British Cemetery.

Walking among all those tombstones made an impact. Indeed, I think it is impossible to see and experience such places without coming away altered.

I was humbled and impressed by the scale of the sacrifices made by my fellow Maritimers. I wanted to do something to share this history with those who have not been so fortunate as I to have traveled there.

I came up with the idea of finding and publishing the letters these young men and women wrote home during the War.

NBA: How did you get so many different letters?

RH: In short, the generosity of fellow Maritimers. I made appeals to Maritimers directly, and once the word was out through newspapers and radio interviews, folks started contacting me. Ironically, the present book is mostly the result of letters I received once the first book was out.

NBA: Is this book another collection of various letters like the first one?

RH: No, definitely not. "Letters Home" was a collection of individual letters from about 20 people on various topics. It provided "snap shots" of their war experience at various points of their journey through the conflict.

"In Their Own Words" is different. It is a continuous "video" of three Maritimers’ entire Great War experience from start to finish of their correspondence.

NBA: How did you select these people?

RH: I chose three distinct individuals from the three Maritime provinces whose unique stories stand out for one reason or another.

NBA: Who are they and why do they stand out?

RH: Eugene A. Poole of Bridgetown, N.S. is the striking story of a man who joined up in August 1914, served the entire war at the front, was wounded and survived the experience. He returned home in 1919 married to an English girl he met during leave in England.

Having the entire collection of letters from a man who served and fought throughout the entire war is something special in itself.

Following the ups and downs of his war time experiences is truly interesting.

The second person is Pauline D. Balloch, a nurse from Centreville N.B. Pauline was a graduate nurse and an experienced professional employed in Toronto. She joined the CAMC (Canadian Army Medical Corps) in May of 1917.

Visiting her parents at their general store in Centreville on her way to Halifax and overseas, she tried to reassure them that she would be safe. It was a message she had to repeat often in her letters as she travelled to England and then to France.

In the end, Pauline did return home safely.

As it turned out, her parents' fears were not unfounded. The hospital ship on which she returned was sunk by a German U-boat a few months later and her good friend and fellow nurse was killed by German bombing at the hospital she had served at in France.

Over 3,500 Canadian women served as nurses in the CAMC and 45 perished. Very few collections of nurses’ letters, let alone women's correspondence, have survived. Having Pauline's letters is a special privilege.

The last person in the book might be a surprise to some, Harry Heckbert, a fisherman from P.E.I. Harry did not volunteer but was conscripted in late 1917.

By the time of Vimy Ridge, Canada's casualty rate had been higher than anyone could have expected. Volunteers were no longer coming forth in sufficient numbers. Men were desperately needed overseas.

After an exceedingly vicious and divisive election, conscription came in to effect. Harry Heckbert reluctantly had to go to war. Before he left, he married his sweetheart and the series of letters from Harry are a heart-rending tale of loneliness and longing.

To add to his anxiety, his new wife was pregnant and Harry longed to be home with his newborn son.
As the months and his training progressed, Harry embraced the need to go to France to fight, but actually did not arrive until two weeks after the Armistice. In March 1919 Harry returned home to his sweetheart and to the child he had dubbed "the little fisherman."

The Rev. Dr. Hebb is rector of St. Peter’s in Fredericton. He is willing to travel to parishes to do Book Talks if there is any interest.