Record-breaking day at the bowling alleys! 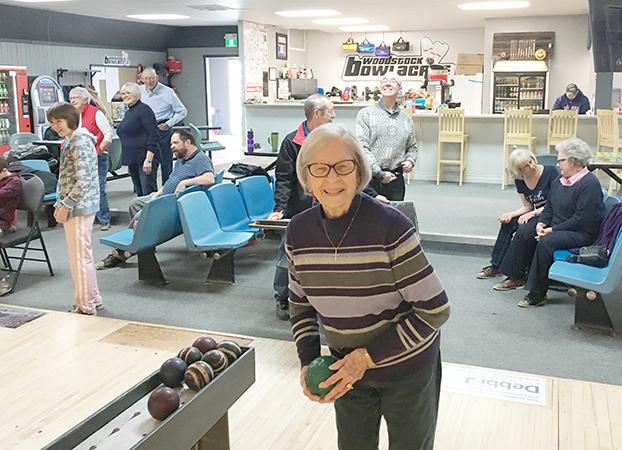 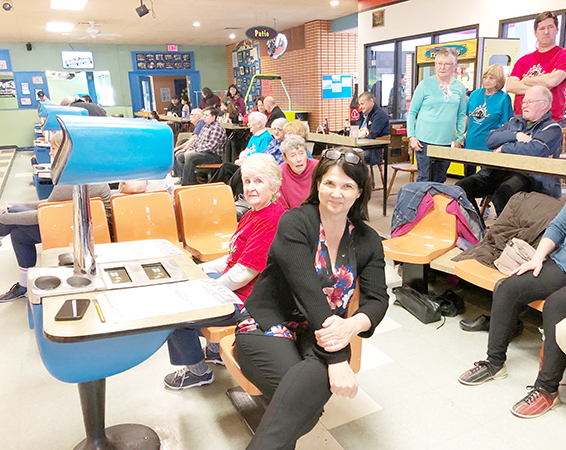 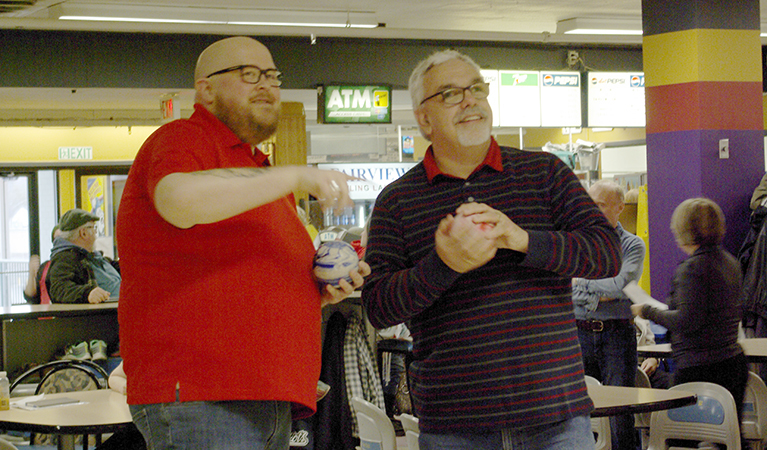 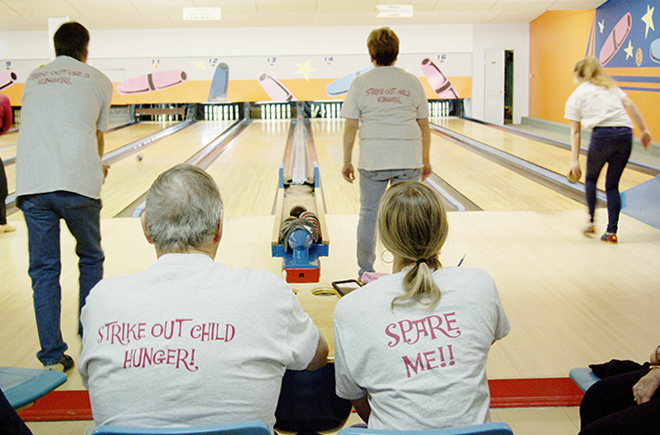 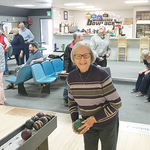 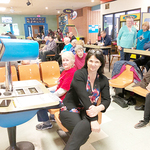 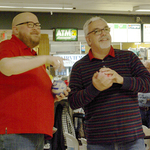 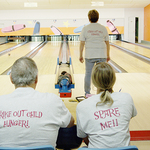 Anglicans and friends gathered April 6 and 7 all over the province to bowl for kids, raising, as of Tuesday, $39,476. The third annual diocesan bowling tournament, again this year, will send its proceeds to organizations that feed children.

The tournament began two years ago in Fredericton with a few local parishes and revenue of $7,500 for Bishop McAllister College’s library in Uganda. It grew last year to include the Kennebecasis Valley and Moncton area parishes, with a windfall of about $25,000 to help alleviate childhood hunger in New Brunswick.

But this year, every archdeaconry was represented and the effort redoubled, something that makes the Rev. Kevin McAllister, the organizer, very happy.

“What is encouraging is that throughout this incredible experience, our mission-minded bowlers were already talking about taking part next year. How incredible is that?” he said.

“On behalf of the Parish of Marysville I would like to thank all who gave their time, money, and prayers to support this important mission. God Bless!”

“My treasurer is confident based on his experience, that number will increase over the next few weeks,” he said.

Money raised will go to local school breakfast and lunch programs and food banks in various areas of the province. In Fredericton, the money will help fund the Student Hunger Program at Fredericton Community Kitchens.

At the bowling event in Fredericton, FtonCK operations manager Mike Smith spoke of the number of meals they provide every week to hungry kids.

“To hear that close to 2,000 lunches a week are provided to area students provided our bowlers with fresh perspective on this injustice,” said Kevin.

In the Kennebecasis Valley, 30 bowlers from three parishes — Hammond River, Quispamsis and Gondola Point — were there for fun and for a purpose.

“Each parish has a passion for getting rid of hunger in children and families,” said bowler Cleo Cyr. “All three parishes are oriented towards helping families.”

The Rev. Michael O’Hara was there as a fan and supporter, as he was last year.

“It’s a good idea,” he said. “It started small with Kevin, and the parishes have embraced it. I think it’s great.”

In Saint John, Fairview Lanes, managed by Bob Cormier, was the centre of all the action. Bob is a member of All Saint’s in East Saint John, and he set up a silent auction, which added hundreds of dollars to the proceeds.

The Inner City Youth Ministry’s Lunch Connection is the recipient of the proceeds in Saint John. It serves lunch to children in three schools several times a week. One of the schools is St. John the Baptist-King Edward in the south end, where Bob once attended and where his niece is now principal.

“It’s an emotional connection for me,” he said. “I know all about the problems in school. That’s the only meal some of the kids have in a day.”

Erin Hodge runs ICYM and was at the bowling tournament.

“I’m really grateful this is happening!” she said. “It’s lots of fun and the best fundraiser! Fairview Lanes deserves a mention!”

Each dollar raised in Saint John represents one noon meal for a child. ICYM provides about 47,000 meals a year for children in Saint John, not including its Lunch Connection summer program which provided about 1,400 lunches in two months last year.

The highlight in Saint John was a special bowler — Bishop David Edwards, who, after scoring 59 points in his first string, admitted that, “I’m really bad at this!”

In Moncton, teams had to bowl on April 7 due to a league tournament already booked.
The Rev. Barb Haire was the main organizer there, happy with a great turnout.

“We had a great day bowling —16 teams, 76 people from the Deanery came for an afternoon of fun,” she said. “We awarded certificates for best team name, best dressed team, most strikes, most spares, most enthusiastic team, best youth team, best over-all team score. It was a great time.”

Back in Fredericton, Kevin was blessed by happenstance in the middle of all the noise and fun.

“We were in the midst of registering teams and collecting the donations when a foursome entered hoping to bowl. They were not part of this mission. They were simply wanting to bowl,” he said.

“When they learned why it was so busy and what we were doing, they felt called to donate to help our children. It was an incredible act of generosity.”

And, as always, there were a few shots hurled across the lanes.

“I am quite surprised to report that Gutter Ball Father Paul Ranson picked up his game from last year,” said Kevin. “It seems as though being closer to the alley is an unfair advantage. I suspect, but can't prove, that he used his son Isaac's score as his own.”

Regarding his challenge that the priest with the lowest score would have to sing at this fall’s Clergy Conference, it might turn out to bite him!

“I am reporting to a relieved Clergy Conference that Gutter Ball Ranson will not be singing this fall. From some of the eye-witness reports, it could be me or Bishop David who will regale the conference with song.”

Archdeaconry of Woodstock
Parishes: Richmond, Woodstock, Wicklow, Wilmot, Peel & Aberdeen
Active bowlers: 32
Cheerleaders: eight
Money raised: $3,000
After-party: A lunch of corn chowder, fresh rolls, cookies, tea, coffee and Easter treats.
QUOTE: From the Rev. Harold Boomer: A huge thanks goes out to all who took part and supported this event. The gift of money will be presented to the Valley Food Bank who provide the required groceries to the breakfast programs at schools in Woodstock, Hartland and Florenceville.

Archdeaconry of Kingston & the Kennebecasis
Parishes: Hammond River, Quispamsis and Gondola Point
Bowlers: 30
Money raised: $1,865
After-party: Lunch at St. Lukes.
QUOTE from Warden of Layreaders Cleo Cyr: We had two octogenarians (Bingie Baxter just turned 87 and Vera Raeburn a little younger) on our 13-member team and two pre-teens, Lily and Ruby — oldest and youngest! The octogenarians also had the best bowling scores of the whole team!

Archdeaconries of Saint John & St. Andrews
Churches: Stone, All Saints, Christ the King, Trinity, plus the Parish of St. George in the Archdeaconry of St. Andrews.
Money raised: $6,080

Bathurst area: The Parish of Bathurst had two teams of six bowlers each and bowled three strings.
Money raised: $1,120, which will be donated to the local schools for their food programs.
QUOTE from Archdeacon Sandy MacPherson: We had a great time of fellowship and it was a competitive afternoon. This was well received by those who bowled and by all who sponsored the bowlers. We had just finished bowling and the talk was of what to do next year.

Campbellton area: 16 bowlers, with a combination of parishioners and friends, along with cheerleaders and kitchen helpers.
After-party at Christ Church: baked beans, biscuits, hot dogs and desserts, plus a sing-song, led by Marina Mills on guitar.
Money raised: $2,333 through sponsors, donations and a bake sale, all going to schools in Campbellton and Dalhousie to support their breakfast programs.
Of Note: The Child Poverty Report Card (2018) by the Human Development Council notes that Campbellton and area has a child poverty rate of 37 per cent.
Last fall, volunteers from three area churches began using the local food bank’s kitchen to prepare meals on Saturdays twice a month for anyone looking for a meal and conversation.
QUOTE from the Rev. Ann Fairweather: It was a fun day! And for a wonderful purpose! We are looking forward to next year’s tournament, building upon what we’ve done this year!

Archdeaconry of Fredericton
Money raised: $10,673
Number of bowlers/lanes: 60/12
Teams’ makeup: seven parishes, the Fredericton Community Kitchens Student Hunger crew, and one Base Gagetown team
After-party: 50 bowlers and fans gathered for supper at All Saints in the Parish of Marysville.

Cecille Ruddock about 2 years ago

Well done, everyone. We have a unique food program here in St. Stephen for our needy children called "We've Got Your Back. " This program is funded through community projects and provides food for the weekend to children in all of our local schools. Volunteers purchase and pack the food on Thursdays and it is delivered to the 5 schools. On Fridays the children pick up their groceries before they leave for the day. One of our fundraisers is our annual Christmas Near and Far concert at Christ Church each fall. Though we do not have a bowling alley nearby, we still do our bit to help feed our local children. It is heartwarming and a blessing to see the success you have had with this tournament.